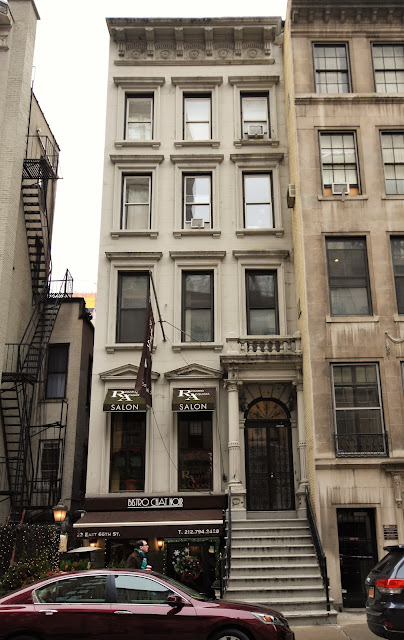 The gradual northward migration of Manhattan's wealthiest citizens had not yet reached the block of East 66th Street, off Fifth Avenue, in the mid-1870s.  Around 1875 developer Charles E. Cornish erected a string of upscale, brownstone-fronted homes which wrapped the southeast corner of Madison Avenue onto the side street.  Among them would have been No. 22 East 66th Street.

A blend of the established Italianate and the up-and-coming neo-Grec styles, it rose four stories above the high English basement.  Designed for a financially-comfortable family, it boasted floor-to-ceiling parlor windows capped with classical pediments, architrave-framed openings on the upper floors, and an especially pleasing cornice with stylized brackets between which were robust rosettes and dentiled arches.  The double-doored entrance, beneath a fanlight, was protected by a columned portico crowned by a stone balustrade.  Most likely it continued as a unit with the mirror-image entry  next door at No. 20.

Webster Wagner purchased the house in 1879 as an investment.  His wide-flung career included politician (he served in both the State Senate and State Assembly), manufacturer, and inventor.  After working with the New York Central Railroad, he developed and manufactured the first sleeping car and the luxurious parlor car, or "drawing-room car."  Railroad companies could expect to from $17,000 to $20,000 for the parlor cars--upwards of $478,000 today.

Ironically, Wagner's death came in a sleeping car when the train he was traveling in was struck from behind by a Chicago Express near Spuyten Duyvil.  His was among the most gruesome casualties, having burned to death.

The Wagner family retained possession of No. 22 East 66th Street, and it would see a rapid turn-over of moneyed tenants.  It was home to John S. Dickerson and his wife, Emma, by the mid-1890s.  Dickerson was a partner in the tin-plate and metal importing firm Dickerson, Van Dusen & Co.  Shortly after Emma's death in the house at the age of 45 in November 1897, he moved to the Plaza Hotel.

Stockbroker Albert H. De Forest leased the house next.  His poor health had forced him to retire on May 1, 1898 from the brokerage house C. I. Hudson & Co., which he and Charles I. Hudson had formed in 1885.  De Forest and his family were at their summer home in Litchefield, Connecticut in August 1899 when he died.

J. Wray Cleveland and his family were the Wagners' next tenants.  A member of the Title Guarantee & Trust Co., the wealthy businessman joined the trend of updating the neighborhood in 1904.  He purchased the old brownstone at No. 131 East 64th Street, demolished it, and commissioned Augustus N. Allen to design a modern residence on the site.  Once the Wrays' new home was completed, No. 22 East 66th Street became home to corporate attorney Parker Kirlin and his wife.

The house was the scene of yet another death in November 1912 when Kirlin's 82-year old father-in-law, Peter J. Ralph died here.  Famous for his Great Lakes steamships, he had formed the firm P. J. Ralph & Co. decades earlier.  During the Civil War he was appointed by President Lincoln as Inspector of Steamers.

By now the house was owned by Wagner Webster's daughter, Anna, who had married George W. Van Vlack.  The seemingly mundane announcement that she had leased it to "Madame Lemay" in February 1916 proved to anything but.

"Madame Lemay" was Berdina Le May, the 44-year old divorcee and present wife of 29-year old actor Pierre Joseph Le May.  Berdina was the daughter of John Findlay Wallace and Sadie W. Wallace.  He was not only President of Westinghouse, Church, Kerr & Co., but the chief engineer of the Panama Canal.  The Wallaces had never approved of the young actor.

Le May, then only 21, had met Berdina Wallace Orr in 1908 when they were introduced by mutual friends at the Iroqouis Hotel.  Despite his daughter's having been married and divorced, and being 35 years old (quite old enough to handle her own romantic affairs without parental interference), Wallace objected to the increasing attachment.  According to The New York Times later, "the result was that Mrs. Orr was sent to Boulder, Col., where she remained for six months."

Following her return early in 1911, the couple ran into each other on a Fifth Avenue bus on March 27.  They "talked things over," according to Le May, and the next day went to Hoboken where they were married.  The Wallaces were unaware of the secret wedding for a month.

The newlyweds took an apartment on West End Avenue, and while they "lived harmoniously" at first, according to Le May, Berdina's parents did their best to convince her that he "was not fit to be her husband," going so far as to bribe her "by acts, promises, and the payment of money."

Mrs. Wallace got her opportunity when Pierre and Berdina got into a "squabble" on June 10, 1911 over his career and "the thought that it threw him too often in the society of other women," as he put it.  Pierre left the apartment, and when he returned he found Berdina gone.  He waited for five days alone there, hoping she would return.

His wife had gone to live in her parents' apartment in the Apthorp on Broadway and 79th Street with her parents.  Whenever Pierre attempted to contact her, "all the information he could get was that his wife was out of town and he could write to her, addressing the letter to her parents' home," said The Times.

It was possibly his still-fervent hope that Berdina would return which prompted Pierre Joseph Le May to lease No. 22 East 66th Street in his wife's name in 1916.  He took his battle one step further in August that year when he sued his in-laws for $100,000, charging them with conspiring to separate Berdina from him.  In reporting the suit, The New York Times noted parenthetically, "Le May said he was now in the movies."

His renting of the East 66th Street house seems to have been in vain.

No. 22 was still a private home when Anna Van Vlack leased it to Frances Karr in August 1919, who converted it for use as a private school.  The school would continue here until September 1931 when Frances Karr leased another house, No. 112 East 76th Street, as its new location.

Anna Van Vlack had died in October, 1923; however the family continued to own and lease the property.  By the Depression years, the block had seen significant change.  Of the old 1870s brownstones, only No. 22 remained intact; although part of its portico had been shaved off when No. 20 was renovated in 1922 by wealthy lawyer William Fawcett.  His famed architect, Rosario Candela, pulled the facade to the property line, thereby removing the stoop and half No. 22's eastern column.


In January 1934 Anna Van Vlack's sons, George and Wagner, leased the house to Salem Edward Munyer.  He announced his intentions "to alter the structure for a residence and a studio for laces."  Munyer's shop was installed in the English basement and the upper floors were updated as his family's home.

After leasing the house for a decade, Salem E. Munyer purchased it from the Van Vlack family in 1945; ending their 66-year ownership.  Munyer wasted no time in hiring architect James E. Casale to convert it to apartments.  His plans were filed in March 1945, projecting a cost of $3,000.

Among Munyer's tenants in the 1950s was author and radio producer Ann Honeycutt.  A close friend of James Thurber, he had illustrated her 1939 How to Raise a Dog in the City, In the Suburbs.

By 1950 Munyer's "lace studio" was gone from the lower level to be replaced by a succession of galleries.  The Martha Jackson Gallery opened here in 1953, and would be the venue for exhibitions of works by modern artists like Marino Marini, Willem de Kooning, Lawrence Calcagno and Paul Hailer Jones over the next few years.

Other galleries in rapid succession after 1955 were the Symons Galleries, the Hewitt Gallery which opened in October 1958, and the Robert Isaacson Gallery.

By 1971 it was the location of Isabelle Mayer's society catering service, Charles Wilson, Ltd.  New York Magazine said she "has gathered scrapbook full of testimonials from members of the Four Hundred.  Though her heart is clearly with the Auchinclosses' debuts, she is almost as proud of her clambakes and the annual ball parties in all the hotels." 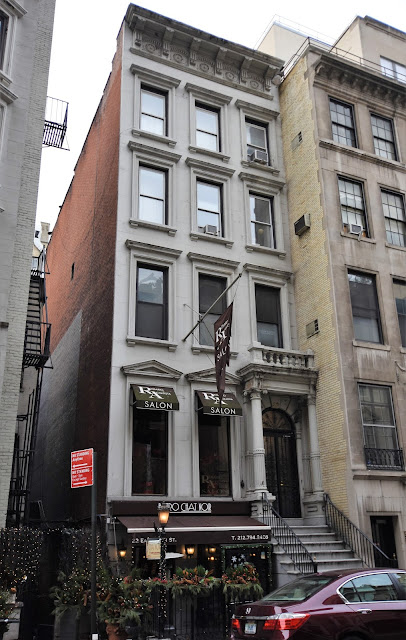 Today the basement level is home to Bistro Chat Noir, while the parlor floor is a beauty salon.  The last survivor on the block from the 1870s, No. 22 looks a bit forlorn.  Nevertheless it is a charming relic of much quieter era on East 66th Street.