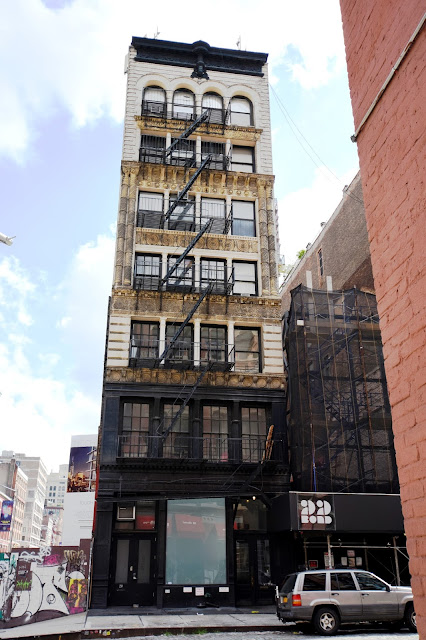 The area around Broadway, Lafayette Place and Great Jones Street was an aristocratic enclave in the 1820s and '30s.  But Bond Street outshone its neighbors in several cases in terms of elegant mansions.  One of these was the marble-fronted residence of Knowles Taylor at No. 20 Bond Street, erected in 1824.

In 1830 Taylor moved to No. 8 Bond Street, and No. 20 became home to Judge John Duer, “one of the most eminent of New York jurists,” according to Valentine’s Manual of the City of New York.  Duer would become Chief Justice of the Superior Court in 1857 and was the editor of Duer’s Reports.  His stay at No. 20, like Taylor’s, would not be especially long.  He moved to No. 97 St. Mark’s Place in 1838.

The next wealthy owner of the house was Maria Banyer, the widow of Goldsborough Banyer and a daughter of Chief Justice John Jay.  Shortly after moving in, she held a meeting of ten ladies in the house in the fall of 1839.  The women founded the “Colored Home” that afternoon.  For years it would stand on East 65th Street, just off Fifth Avenue.  Maria lived in the mansion until her death at the age of 75 on Friday night, November 21, 1856.

On March 26, 1857 A. S. Hope paid $17,000 for the “marble-front three-story dwelling.”  He had to pay separately--an other $9,325--for the rear lot, facing Great Jones Street, on which the private stable stood.  Although the neighborhood was already seeing change (Bond Street had the largest concentration of dental offices in the city in the 1850s), it still retained its mostly upscale distinction; reflected in the combined price of approximately $735,000 in today's dollars.

Like the owners before him, Hope filled the house with expensive furnishings and artwork.  On December 14, 1862, when he prepared to leave New York City, he placed an advertisement in The New York Herald offering his “magnificent rosewood seven octave piano” for $240; less than half the $500 he had paid for it only five months earlier.  He described it as having “carved legs and mouldings, overstrung bass, of superior tone and finish, made by one of the best makers.”

Hope would be among the last homeowners to enjoy Bond Street as an exclusive residential enclave.  Following the end of the Civil War wealthy citizens moved northward as commerce continued to inch into the area.  Finally, in November 1880 architect G. F. Pendleton filed plans for owner E. P. Dickie to convert the mansion for business.  The marble front was “altered” and all the interior walls removed, replaced with “girders and columns instead.”

Dickie held on to the property until 1894, leasing to businesses.  That year the massive project to connect Elm Street to the south with Lafayette Place, creating Lafayette Street, began.  The new thoroughfare would cut directly through the Bond Street block, suddenly making No. 20 a corner property.

In April 1894 the prolific real estate brother team of Henry and Samuel Corn purchased No. 20 for $41,000.  It may have been the coming Elm Street project that prompted them to have second thoughts; or it may have been the astounding profit offered.  Just days later they resold the property to Weil & Mayer for $100,000.  The firm, headed by Siegfried Mayer, announced its intentions of erecting “a seven-story brick business building on the site.”

On December 14, 1895 the Real Estate Record & Builders’ Guide commented on the firm.  “Weil & Mayer, the well-known real estate investors and operators, are, or were a year or so ago, the most extensive owners of flat and tenement property, and were credited with the ownership of 130 such buildings.”  But now they were disposing of their tenement holdings “at reasonable prices and giving their attention to investments in business property.”

Such was the case with No. 20 Bond Street.  The firm commissioned Cleverdon & Putzel to design a modern loft and store building to replace the marble mansion.  As if playing with children’s building blocks, the architects stacked disparate styles one atop another in one- and two-story sections.

The two story cast iron base was less exciting than most.  A shop window was flanked by two double-doored entrances—one to the store and the other to the upper stories.  The second floor held a dignified row of tall six-over-six windows, most likely fronting a showroom.

The restrained stone-faced third floor supported an exotic two-story Moorish Revival section that dizzied the passerby with swirling arabesques, engaged columns and an ornate cornice.  The sedately Romanesque Revival uppermost section was clad in brick and trimmed in stone.  Four openings on each level visually connected to form tall arches.  The overall design was unified by the repeated use of elaborately carved cornices and friezes.

The building was resold in January 1898 for $125,000, prompting the Record & Guide to say the sale “speaks well for values in that neighborhood.”

In 1899 the building was home to an unlikely tenant: The Protective League of Salt Water Fishermen.  That year it adopted a platform to “protect the gamefish of the Hudson River between Bedlow’s Island and Tarrytown Light.”  At the time striped bass and other fish were being netted for use in fertilizing plants.

The group added two more issues to its crusade the following year.  The New York Times described the environmental “follies” saying “fishing waters are rapidly becoming spoiled by sewage and depopulated through the rapacity of the net and mossbunker fishermen and the unreasoning desire of some men to take home fingerlings, which are of no earthly use, except as food for domestic cats.”

Also in the building was Alfred McKenna & Co., manufacturers of “hat frames.”  Among its employees in 1902 was German-immigrant Max Alexander, a 53-year old salesman.  On the evening of October 23 that year Alexander left work and went uptown to his club, the German language Aschenbroedel Verein on East 86th Street.

The following day The Evening World reported that the big card room was crowded “with members engaged in games of cards, the favorite ‘scat’ and pinochle.  The atmosphere was smoke-laden, but the players were happy.  So was the rotund Alexander.”

As Alexander’s game went on beer glasses were replenished, each time with a fresh papier-mâché coaster printed with a German slogan.   Players recalled later that “the mottoes had more fascination for him than the game.”

One player commented “Max is sentimental tonight.”
Another replied, “He is really dreaming over those mottoes, wine, women and good living.”

Alexander’s response was surprisingly philosophical and dark.  “Yes, but in the midst of life we are in death.  We can’t always hope to live for their enjoyment.”

The portly man won the next hand and pounded the table so vigorously “that the beer glasses and motto discs fairly jumped from the board,” according to The Evening World.   His score for that game set a record at the club.  The cards were dealt for a new game.

Alexander’s friends waited for him to play his hand.  He sat with his head slightly back, his eyes only partially opened.  Becoming impatient, they raised their voices, “Your play, Max; hurry up!”

The Evening World wrote “Alexander’s head hung forward limply. He was dead.”  Somewhat dramatically the newspaper reported “Beneath his glass of beer was the disc bearing the motto: ‘Gesundheit is besser wie krankheit.”  Health is better than sickness.

Alfred McKenna & Co. would remain in the building making hat frames for years.  Other millinery and apparel firms here were Henry Kastner, neckwear maker in 1906; Rosenberg & Daseuer, manufacturers “of flowers and fancy feathers,” who moved here from No. 40 East 9th Street in 1915; and William Berkowits who took the second floor in 1916 for his hat frame factory.

Through the 1920s No. 20 Bond Street continued to house apparel and millinery firms.  In 1921 Perl & Patrino, Inc. was still here, making children’s hats; and in 1924 the Beaver Shirt Company leased the sixth floor.

But by 1939 when the building was sold, then resold within two weeks, the neighborhood was in decline.  The property was assessed at just $29,000, almost half of which was the value of the land.

But as Manhattan neighborhoods do, the gritty Noho area rebounded.  In 1993 the building was converted to “joint living and work quarters for artists.”   Today, while partially obscured by grime and a fire escape, Cleverdon & Putzel’s eccentric façade is little changed.  Even the 19th century entrance doors survive on the eastern side.