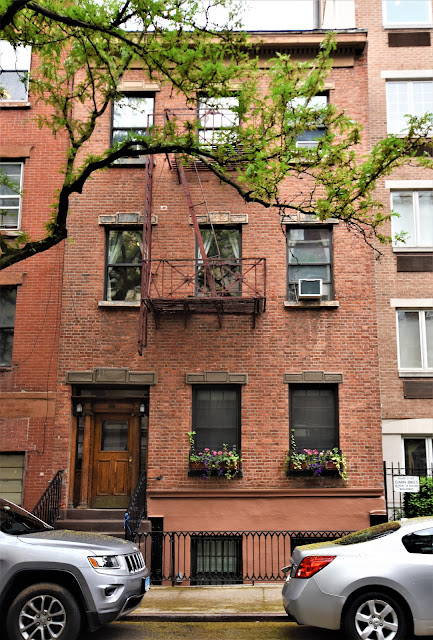 In 1760 Major Abraham Mortimer, Commissary to the British Army, leased 26 acres of land from Trinity Church, just south of Greenwich Village.  He erected his lavish country home, named Richmond Hill.   Following the Revolution the house briefly became the vice-presidential mansion; home first to John Adams then, beginning in 1797, to Aaron Burr.  The glory days of Richmond Hill came to an end after Burr's ignoble 1804 duel with Alexander Hamilton.

John Jacob Astor leased the estate from Trinity Church, criss-crossing the land with new streets where brick houses quickly began rising.   By the 1820s an explosion of development was being seen, inspiring seemingly unlikely investors to get into the speculative real estate game.

Two of these were grocer George S. Mills and carpenter John A. Ryerson who formed the firm Mills & Ryerson.   In July 1826 they purchased the land at the northwest corner of Prince and Sullivan streets and soon began construction of four houses--two facing Prince and the other two on Sullivan Street.  Mills & Ryerson seems to have been initially successful; but declared bankruptcy in April 1842.

No. 134 Sullivan Street was one of the houses begun in 1826.  Three stories high and faced in Flemish bond red brick, it exhibited many of the elements of the Federal style--a handsome doorway with fluted Ionic columns and sidelights, and paneled stone lintels.  But it also displayed the influence of the emerging Greek Revival style; forgoing the peaked attic with dormers in favor of a full-height third floor.  A stone-fronted English basement was accessed by a doorway under the stone stoop.


The house became home to the E. C. Riley family.  Riley's profession is unclear; but the family were members of the Swedenborgians.  The religious group was founded by Emanuel Swedenborg who declared he had the ability to freely visit heaven and hell, and could speak directly to demons and angels.  The Last Judgment, he revealed, had already come to pass, happening in 1757.

Among the most feared diseases of the first half of the 19th century was tuberculosis, known then as pulmonary consumption.  It attacked E. C. Riley, Jr. who died one month after his 17th birthday, on Monday, February 10, 1845.  His funeral was held in the Sullivan Street house the following day.  The entire congregation of the New Jerusalem Church (which numbered less than two dozen persons) was invited.

Riley and his wife were still living in the house a decade later.  He devoted some of his time as a "laddie," or volunteer firefighter with Engine Co. No. 17 at least by 1854.

No. 134 Sullivan Street had a boarder in 1861.  John Ickler made his living teaching piano.  His reputation was such that when William B. Bradbury later advertised his "new scale pianos" he boasted Ickler's endorsement.

By the spring of 1864 No. 134 Sullivan Street had only one resident, possibly Riley's widow.  A rather charming advertisement appeared in The New York Herald on May 24 that year:  "A gentleman can obtain a very neat and comfortably furnished Front Room, with breakfast and tea if desired, in a genteel private house, with an elderly woman."

In the 1870s the railings of the stoop and areaway were replaced with attractive Gothic-inspired ironwork.  At the time the upper floors were being operated as a boarding house.  In 1876 Patrolman Edward Dunn was living here, earning an annual salary of $1,200--nearly $27,500 today.

Ironically, another boarder, William Smith, was arrested on March 20 the following year, for forgery.  He and Frank Dwyer (who refused to give his address) went to the wine store of John Osborne at No 45 Beaver Street and presented an order for 13 cases of wine for F. H. Dwyer.  Dwyer was a known client of Osborne, so the clerk did not suspect foul play.  Later Osborne realized that the signature was a forgery and had the wine-loving crooks arrested.

Also in the house was Henry E. Wegelin and his wife, Elizabeth.  Born in Switzerland around 1835, he had come to the United States in 1855.  The couple's son, Oscar, was two years old in 1879.  On August 28 that year, a daughter, Lydia Ernestine, was born in the Sullivan Street house.

At some point the property had been purchased by musician Louis Ohlemann.  An oboist, he performed with the New York Philharmonic from 1851 to 1874.  Following his death the house was sold at auction on Wednesday, March 6, 1889.

By now the Sullivan Street neighborhood had filled with working class immigrants, many from Italy.  No. 134 was purchased for $11,250 by Giovanni Farina.   Farina moved in with his wife, Annunziata, and their sons George and Louis.

Within the year Farina commissioned architect W. Holman Smith to renovate the basement level to a store.  A simple cast iron storefront was installed.

Louis Farina ran a express company around the corner at No. 132 Prince Street.  One of his drivers, "Dutch" Kelly, was being sought by police in April 1895 after a prostitute who called herself Alice Welsh was found bleeding to death in the hallway of the tenement house at No. 143 Thompson Street.  Alice took the surname of Michael Welsh, "who described himself as a song-and-dance artist," according to The New York Times, after they lived together for a time.

Police found Welsh in a saloon on West Houston Street on April 22.  The Times noted it was "a resort for the women who walk the streets in that neighborhood."  Welsh said he had not lived with Alice for two years.   On the morning of Sunday, April 21, he said, just hours before she was found dying, she was seen drinking with "an Italian" in that same saloon.

Detectives trying to tracing the movements of Alice that day had to sift through a tangle of aliases.   The woman with whom Alice worked on the streets was known as "Gimpy" Amanda.  The Italian with whom Alice was seen in the saloon was Louis Lavale, better known as "Big Louis."  Welsh told them the police Big Louis had been "pressing his attentions" on Alice for a long time and they often quarreled.

Police learned that after Alice and Welsh were no longer living together she had moved in with "Dutch" Kelly--whose real name was Richard Hermann.  They stopped by Louis Farnina's Prince Street business to interview him.  To their disappointment, Kelly had quit about two weeks earlier.

The basement store was leased to several proprietors.  Marco Degregario took it for three years in 1897, followed by John C. Miller in 1900.

When Giovanni Farina transferred title to the house to Annunziata in April 1904, it was assessed at $9,500--about $258,000.  She sold it five years later to Peter J. Rubino and Andrew Leone, who immediately put the title into the names of their wives, Rosa Rubino and Anna M. Leone.  At the time of the sale the house was described as a three-story brick tenement and store.

The new owners' tenants were Italian.  Living there within the next few years were Giovanni Motta, Gennaro Calabrese (a partner in the Italian wine importing firm of Calabrese & Cafariello), and the Elio family.

In 1917 reformers warned of white slavery operators who forced young girls into prostitution.   Middle and upper class families were unaware of the scope of the problem until 18-year old Ruth Cruger disappeared on February 13.  The privileged girl was going ice skating and wore white kid gloves and a velvet coat.  She never returned to the Crugers' home on Claremont Avenue.

It was only after her body was discovered in June and The Evening World began investigating that the horrifying truth was discovered.  In the past six months more than 700 girls had been reported missing in New York City.  The newspaper printed a full list of every one, most of whom had disappeared within a block of their homes.   On the list was 14-year old Lillie Elio who had left No. 134 Sullivan Street on May 21 never to be seen again.

The neighborhood remained heavily Italian for decades.  Nick Acquafredda lived at No. 134 with his widowed mother when World War II broke out.  He joined the Army and was wounded in battle in April 1943.

A resident who attracted less honorable press was 25-year old Melinda Stefan, who fell for the violent bank robber Peter Phillip Mauchlin in the early 1970s.  He bombed a bank near Union Square in October 1973, injuring 10 persons, and robbed at least three other Manhattan banks as well as the Meadowlands National Bank in North Bergen, New Jersey earlier that year.

Before committing the Union Square bombing, he had escaped from the Federal House of Detention.  Five days later he was captured in Myrtle Beach, North Carolina with Melinda.  She was held on $10,000 bail on charges of harboring a fugitive.


Through it all the exterior of the Riley house mostly retained its 1826 appearance.  The basement storefront was covered over towards the end of the 20th century (although two cast iron piers are still visible).  Today there are two apartments in the house that has survived nearly two centuries of change on Sullivan Street.