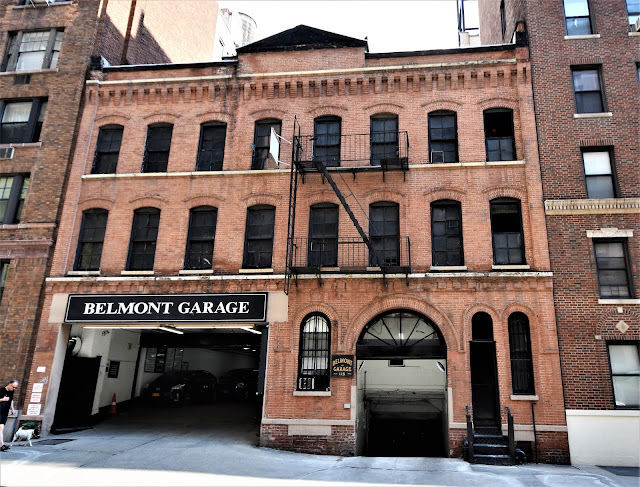 By the early 1880s well-to-do families were moving northward into comfortable brownstone rowhouses east of Central Park.  While the wealthiest of these constructed private carriage houses near their mansions; others required boarding stables for their vehicles and horses.  In response, George J. Baab demolished two old houses at Nos. 113 and 115 East 84th Street in the spring of 1884 to make way for a new stables.

The site was well chosen, sitting between Park and Lexington Avenues at a time when the railroad down Park Avenue literally defined the right and wrong side of the tracks.  A boarding stable here would be conveniently close its clients' homes; yet unobtrusively east of Park Avenue.

Baab, who was a dentist, was familiar with the neighborhood.  He lived and worked at No. 164 East 83rd Street.  Baab hired architect John McIntyre to design the 51-foot wide stables.

The completed structure cost the dentist $12,000--or around $300,000 today.  McIntyre's handsome design relied mainly on brick for ornamentation.  The skinny, stylish openings and the twin carriage bays of the ground floor were traced in projecting brick.  Brick modillions lined up below the thin stone cornice that introduced the upper floors.  The elliptically arched upper windows wore brick eyebrows.  A complex stepped corbel table supported the parapet with its decorative pediment.

Baab's boarding stable was leased to a proprietor as he focused on his dental practice.  His brother, Frank, was studying dentistry in 1891 and was at Baab's office, alone, when a young woman entered.  She told him she had a decayed wisdom tooth which was causing her intense pain.  She insisted she did not want it pulled; but wanted something to ease the pain.

The dental student felt he could handle the case without waiting for his brother.  He directed the patient into the chair.  According to Items of Interest (a monthly magazine for the dental trade) in July 1891, "She was very nervous, and young Mr. Baab had just put his finger on the tooth when it gave a throb that caused her jaws to join each other with great speed.  They were stopped by Mr. Baab's finger."

The woman's bite drew blood and no doubt mortified, "She said her tooth was better and went away."  Frank Baab's bite wound healed, but a few days later "the young man's jaw worked as if it needed oiling."   George Baab called in a doctor, who diagnosed his brother with impending lockjaw.  By now he could no longer walk and his chances of recovery looked slim.  Eventually, however, he beat the odds (at the time only 10 to 15 percent of lockjaw patients were healed).

William H. Merriam ran a livery stable further downtown at No. 142 Park Avenue as late as 1894.  He moved to the 84th Street building, most likely to expand his business.  It turned out to be a bad idea.  On April 15, 1898 Deputy Sheriff Radley received executions for $2,091 against Merriam; and 12 days later he "sold out" the liveryman's carriages and horses.

At the turn of the century the Star Stable was leasing the building from the Baab family.   On the morning of February 27, 1906 two men, Edward Klein and Michael Yagle, rented a runabout (a light buggy) and horse.  The commonplace transaction turned out to be anything but.
The next day The New York Times reported "It was a big black horse named Billy that caused the trouble."  As the men were driving along 58th Street between Sixth and Seventh Avenue, the buggy's front axle broke, spooking the horse.  "In three jumps Billy changed his gait from an easy trot to a full gallop."  Klein was at the reins and nothing he could do could control the horse.

When they crashed into a light wagon at Seventh Avenue, both Klein and Yagle were thrown out.  Although bruised and dazed, they got up in time to see Billy crash into another vehicle at Eighth Avenue, then continue on.

"The horse was blind with fright, and took no account of a big van drawn by two horses advancing in his path," wrote the newspaper.  A terrific crash followed, shattering the pole and knocking the horses to the ground.  Although the van men were only slightly hurt, their horses were not so lucky.  "The splinters of the pole pricked their skins, and the kicks of Billy, who had maintained his footing, added to their discomfort."  Even this did not stop Billy.

Untangling himself, he bolted westward.  And then the episode became even wilder.

Producers Williams and Walker were staging a show at the Majestic Theatre that included eight donkeys.  A group of boys was leading them toward the theater just as Billy came galloping toward them.  As The Times put it, they "interfered with the runaway's progress."

When the horse banged into one of the donkeys as he flew past, the animal "kicked up its heels, threw off the small boy leading it, and, with ears laid low, headed straight for the Subway kiosk."  The donkey charged down the stairs, barely missing a woman carrying her baby, and made for the platform.  Subway employees encircled and calmed the animal "as soon as they saw that the donkey was not a passenger in disguise."

In the meantime, Billy was still terrorizing the streets above.  Despite the buggy shafts, some splinters from the previous crash, and leather straps dangling from him, he charged full speed through traffic and pedestrians.  Policemen in pursuit yelled ahead to warn children playing in Billy's path, and at one point he barely missed a collision with a street car.

Finally, a freight train rumbling along Eleventh Avenue proved too much of an obstacle.  A policeman grasped him by the bridle, "the only whole piece of horse equipment left," and the excitement came to and end.

By 1908 automobiles were edging out horse-drawn vehicles as the preferred mode of transportation.  In February that year Mary Baab hired architect J. W. O'Connor to update the building to accommodate motor vehicles.  The $3,000 in renovations for the lessee, The Belmont Garage, included reinforced concrete beams.

Later that year, on Sunday morning, November 22, banker Leo Speyer was informed that his expensive automobile "was found piled up in the gutter in front of the Plaza Hotel," according to The Evening World a few days later.  "One of the wheels was broken and whoever had taken it out evidently had a good time."  The driver who had a good time was not Speyer, who had until then assumed his vehicle was safely parked in the Belmont Garage.

The mystery deepened that afternoon when Linsday Tappan, a partner in the law firm Tappan & Bennett, send his chauffeur to pick up his car at the garage.  It was not there.

Detectives Barbieri and Haggerty brought Michael Keene into the Jefferson Market Court on November 24.  He was the foreman at the Belmont Garage.  When the detectives arrested him at his home that morning, he confessed to having taken both cars on joy rides. 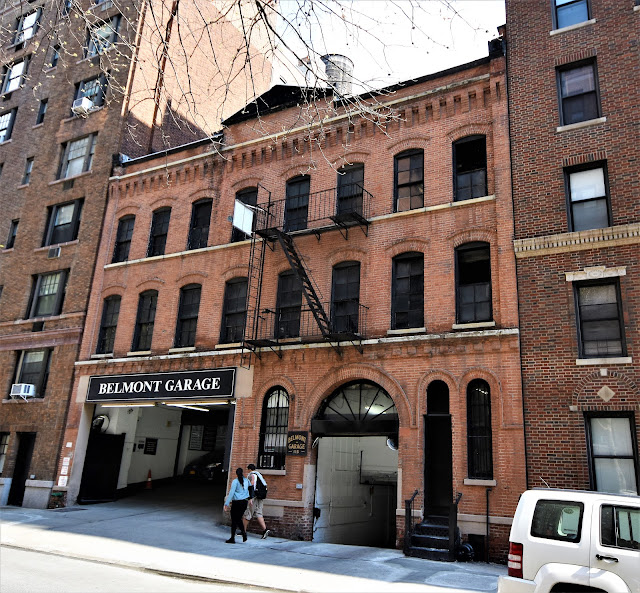 More than a century after Mary Baab renovated the 84th Street building for the Belmont Garage it is still here.  Other than the gaping entrance at ground level, little has changed to McIntyre's livery stable design.