John Teele Pratt was born on Christmas Day, 1873, to Charles Pratt and the former Mary Helen Richardson.  Charles owned a kerosene refinery, the Astral Oil Works, in Brooklyn.  The year after John was born, Charles agreed to join John D. Rockefeller's Standard Oil Company.  It was a good move.

The Pratt family were all millionaires by the turn of the century.  John graduated from Harvard Law School in 1900, joining the prestigious firm of Carter & Ledyard on Wall Street.  He and his wife, Ruth Sears Baker, moved into a three-story brownstone rowhouse at No. 11 East 61st Street.

While the neighborhood was exclusive, the 1872 houses had become decidedly out of fashion.  In April 1907 Pratt hired one of America's premier architects, C. P. H. Gilbert, to update No. 11.  His plans called for making "extensive exterior and interior improvements."

Three years later the Pratts hired another architect, Charles A. Platt, to design their summer residence, Manor House, in Glen Cove, Long Island.  The Georgian-style mansion sat on 55 acres and was deemed by Country Life Magazine among the 12 "best country houses in America."

The Pratts were no doubt pleased with the results.  In May 1914 John purchased the two 25-foot wide houses next door--Nos. 7 and 9 East 61st Street--and commissioned Charles A. Platt to replace them with what the Real Estate Record & Builders' Guide assumed would be "a high-class residence."

The Record & Guide was correct.   Platt's plans, filed in March 1915, called for a brick and Indiana limestone residence costing $150,000.  By the time construction was nearing completion in December that same year, the cost had risen to $200,000--in the neighborhood of $4.87 million today.


The Pratts would have six children.  The family moved into their new house and John leased No. 11 to the wealthy widow, Mary L. Flagler.  Despite her marriage to Judge Robert W. Bingham on November 16, 1916, she renewed her lease the following year.


Ruth Baker Pratt was no insipid society hostess.  A graduate of Wellesley College, she was actively involved in political and social issues.  Affairs in the 61st Street mansion most often centered around a cause. 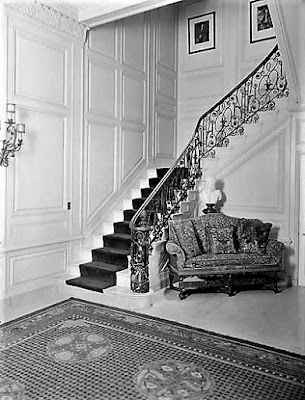 On May 2, 1917, for instance, she opened the house for a sale for the Department of Public Charities. The Sun noted "The articles to be on sale have been made by neurological and aged patients on Blackwell's Island, Mr. Pratt being the chairman of that department.  Hand made lace, tennis nets and attractive needle work will be offered for sale, and the Junior League will show work made under their supervision in the children's wards."

Tragedy struck the Pratt home the following spring.  On May 23, 1918 one-year old Ruth died of pneumonia.  The emotional devastation was clear in the newspapers' noting "funeral services private."

Later, while entertainments for the benefit of charities continued, such "the second of the series of readings by well-known authors for the benefit of the Goodhue Home for Convalescent Children" here on March 29, 1921; Ruth's activities turned more and more towards politics.


On March 7, 1919, for instance, the governor of the Federal Reserve Bank, Benjamin Strong, spoke to a group of women here "on the coming Victory Loan;" and on May 15, 1922 Ruth hosted the meeting of  the National Consumers' League "to discuss blanket bills of the National Women's party."

Politics and social issues were set aside in December 1922 when John, Jr. and Virginia returned home from college and school for the holidays.  On December 29 The New York Herald reported "But not all the dances of last night were for debutantes."  Ruth had thrown a society dance for young people in the 61st Street mansion.


If anyone was surprised that a woman might be nominated for political office in 1925, it was not mentioned in the press.  On May 12 The New York Times reported "A movement has been started among Republicans in the Fifteenth Assembly District to nominate Mrs. John T. Pratt for Alderman."  One politician, Frank J. Coleman, Jr. told reporters "As soon as the suggestion was made to me that Mrs. Pratt be nominated for Alderman this Fall, I thought well of it...Everywhere there was instant and affirmative response."

Sure enough, Ruth was elected to the office, becoming the first woman to so serve.   Only a month before the election, John Teele Pratt, Jr. was married to Mary Christy Tiffany, the daughter of George S. Tiffany. 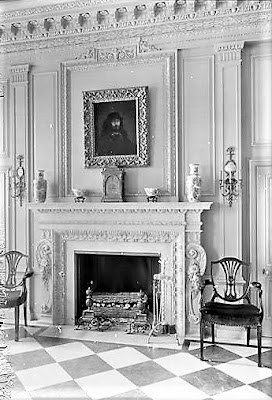 Although her name appeared in newspapers more often than her husband's, she did not overshadow him.  By now he was a director in the New York, New Haven & Hartford Railroad, among others, and a trustee in the Pratt Institute which his father had founded.  He was also a partner in the Stock Exchange firm of Grayson M. P. Murphy & Co. and a director in several banks.

The mansion was once again the scene of a social affair following Virginia's wedding to Robert H. Thayer in a fashionable St. Bartholomew's Church ceremony on December 7, 1926.  The reception was held in the 61st Street house.

Some millionaires remained in the city while their families summered in resorts or country estates, visiting on weekends.   But John commuted from Glen Cove to the his office in the Standard Oil Building at No. 26 Broadway every day on his yacht, the Tuna.  On the morning of June 17, 1927, he dropped into the office of his brother, Herbert, on the 24th floor, then went up to his own office a floor above.

Just after 10:00, while he was speaking with his partner Frederic W. Olmstead, he felt dizzy.  As Olmstead called for the medical staff in the building, Pratt lost consciousness.  By the time doctors arrived, he had succumbed to a heart attack.

Because the family was still in mourning in February 1928, Sally's marriage to James Jackson, Jr. was held in the 61st Street mansion and, according to The New York Times, "will be kept small, only relatives and a few intimate friends being asked to the ceremony."  The bridal party and ushers, nevertheless, compiled a Who's Who of New York society with names like Belmont, Iselin, Whitney, Biddle, and Cushing.

In the meantime, Ruth's political career continued as she was re-elected as Alderman in 1927, serving until March 1, 1929.  She was a member of the Republican National Committee from 1929 through 1943; a delegate to the Republic National Convention four times and the State Convention seven.  In 1929 she was elected to Congress--the first woman from New York so honored.

By the time Phyllis married Paul H. Nitze in the family home on November 28, 1932, the neighborhood was seeing change. The mansions directly across the street had been razed for the new Pierre Hotel as commerce inched uncomfortably close to the 61st Street block.

In 1934 Ruth leased No. 7-9 East 61st Street to the Soviet Government.  On April 21 400 guests, including Mayor Fiorello LaGuardia and his wife, were invited to the official opening of the Soviet Consulate.

Seven months later, on November 7, Consul General Leonid N. Tolokonski and his wife hosted a celebration of the 17th Anniversary of the Russian Revolution.  The obvious irony of the lavish celebration was not lost on The New York Times, which noted that the Soviets "entertained in the bourgeois way."

There was nothing proletarian in the display--more expected in the days of the Pratts' residency.  "In the buffet, tables were heaped with dainty sandwiches.  There were thin slices of bread dotted with caviar.  Canapes and cakes of all sizes and sorts beckoned the guests.  Fruits were piled high on the tables.  Then there was vodka, strong and stimulating, and Tsinandali, a mellow dry red Georgian wine."

An article by Joseph Albright and Marcia Kunstel, titled "'Mlad' and 'Star'" and published in the January 1998 issue of the Bulletin of the Atomic Scientists suggested "Perhaps not wanting to advertise the fancy neighborhood to their colleagues back in Moscow, the Soviets code-named the consulate zavod, or 'the factory,' in their secret cables, conjuring up a much drearier vision that East Side elegance and greenery."

As a matter of fact, almost immediately the Soviet Consulate became a hive of spies and espionage.  According to Barnes Carr in his 2016 book Operation Whisper, "The FBI had teams of watchers--known as the bucket squad--in a room across the street in the Pierre Hotel, and they used 35-mm newsreel cameras to film people entering and leaving the consulate."

The top three floors of the Pratt mansion became what Carr describes as "the control center for Soviet spying n North America.  But the not-so-secret spy and counter-spy activities came to a dramatic and horrific end in 1948.

Oksana Kasenkina had been sent to Manhattan from the Soviet Union in 1946 to school diplomats' children.  Two years later she was due to be sent back.  She appealed to the editor of a Russian-language newspaper for help on July 31, 1948.  She was spirited away to Reed Farm upstate, operated by the White Russian Tolstoy Foundation.

Foolishly, she wrote a letter to Consul Jacob Lomakin pleading "I implore you, I implore you once more, don't let me perish here. I am without willpower."  Soviets arrived at the farm on August 7 and took Kasenkina back to the 61st Street mansion, where she was imprisoned in her room.

The Soviets drew attention to the affair by formally accusing the Tolstoy Foundation of kidnapping the teacher.  Quickly newspapers suspected she was being held against her will.   Common Cause, Inc., an anti-Communist organization, sought a habeas corpus writ that demanded Consul Lomakin produce Kasenkina in court on August 12.  The Consul ignored the summons.

On August 12 newspaper men, waiting for the next development, gathered on East 61st Street around the consulate.   Suddenly, a uniformed employee of the private club next door appeared and told the reporters "Hey, fellows!  A woman just jumped out the back window!"

Oksana Kasenkina had thrown herself from her third floor window to the paved courtyard.  The New York Times reported "There was an instant of silence.  Then the whole neighborhood was in uproar."

The story swept the nation.  The Chicago Tribune said that the New York cop who shouldered his way into the consulate despite Soviet attempts to block him had breached "the Red Iron Curtain."  The story of the woman who tried to leap to freedom suddenly defined the Soviets.

The ugly and shocking affair signaled the end of the Soviet Consulate at No. 9 East 61st Street.  On August 25, 1948 it was ordered closed.

The Pratt mansion would survive--with far less drama--for almost 30 years.  In 1978 the apartment building named 800 Fifth Avenue was completed.  The site of the magnificent Pratt house made way for its "plaza," or private garden.