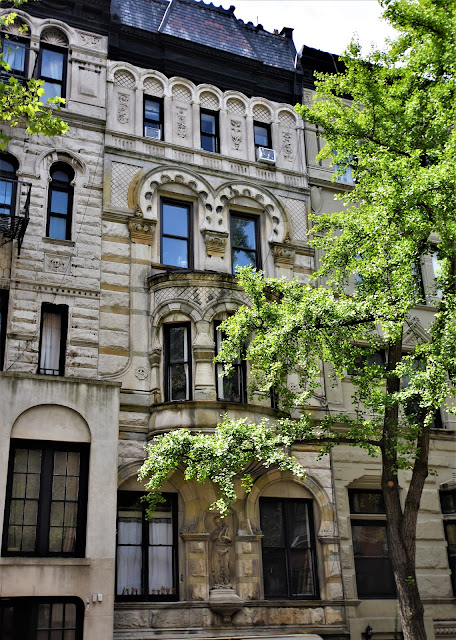 In 1886 Margaret Brennan was keeping the firm of Thom & Wilson busy.  The architects were given commissions that year for four tenement buildings on Tenth Avenue (later renamed Amsterdam Avenue) at the corner of 60th Street, for four houses on West 74th Street, between Amsterdam and Columbus Avenues, and another 10 houses abutting that project.

Thom & Wilson filed plans for the last project in June, estimating the construction cost of each house at $18,000, or about $525,000 today.  The architects made it clear that the building would be done by "day's work," avoiding the ongoing problem of union labor workers walking off construction sites throughout the city.

Among the row, completed in 1887, was No. 110 West 74th Street, an enchanting mixture of Queen Anne, Romanesque Revival and Moorish styles.  The marble-fronted house rose four stories above an English basement to a slate-shingled mansard.  Moorish horseshoe arches appeared at each level, joined by historically divergent Renaissance-style spandrel panels at the fourth floor, Corinthian pilaster capitals at the third, and the delightfully quirky and asymmetrical Queen Anne mansard cresting.  The most striking--and surprising--decorative element, however, was the bas relief of a classical lyre-playing woman between the entrance and parlor window.


The house became home to well-to-do contractor and builder Charles S. Kendall and his wife, Annie.  Kendall was president of the Charles S. Kendall Company.  The couple's lifestyle would take a major downturn beginning in 1893 when a massive economic depression swept the country.  In 1895 the national unemployment rate had risen to 14.5%.  Construction of new buildings ground to a near-halt.

Early in 1897 the Kendalls moved from West 74th Street to No. 116 West 14th Street.  On June 21 The New York Times ran the headline "Contractor Pleads Poverty."  Although his firm had received the $1.2 million contract for a new hotel at 36th Street and Broadway, Kendall was in dire financial straits.  The article noted "He receives no salary as President...He claimed, further, that he had earned no money within the last month and that his wife supports the family."


While they could no longer afford to live in the 74th Street house, the Kendalls managed to retain ownership, with the title in Annie's name.  They leased it to George Harris Shreve and his family. 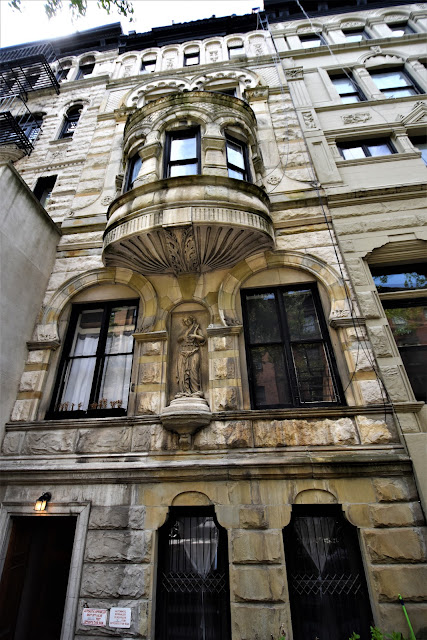 Shreve, described by the New-York Tribune as "a well known drygoods merchant," was the senior partner in the wholesale firm Shreve & Adams at No. 86 Leonard Street.  Born in New Jersey in 1841, he entered the dry goods business in Philadelphia when he was 17 years old.  He served as a sergeant in the 15th Pennsylvania Regiment during the Civil War; and then came to New York in 1862.

George and his wife, the former Grace McJilton, had two children, Mary Rigdway and John Nelson Shreve. Early in March 1903 Shreve became ill and never recovered.   He died in the house at the age of 61 on March 29.  His funeral was held in the parlor two days later.

Grace's mourning did not interfere greatly with her social schedule.  Three months after the funeral, on June 6, newspapers reported that she, Mary and John had checked into the Dennis Hotel in Atlantic City for the summer.

Five years later Grace was back in Atlantic City "to join in the Easter parade," according to the New-York Tribune.  She attended the theater on the night of April 19, 1908 and was "in the best of health," according to the newspaper.  She was enjoying the night sea breezes in one of the boardwalk's famous rolling chairs, accompanied by Mary's new husband, Thomas Fisher, when she suddenly and inexplicably died.

By then Grace had moved to No. 129 West 73rd Street.  Soon after George Shreve's death Annie Kendall had sold No. 110.  It underwent several rapid-fire turnovers in ownership until December 1903 when it was purchased by the bachelor Dr. James Joseph Walsh.

Described a year earlier by The New York Times as "a successful writer on literary and scientific topics," Walsh was educated at Fordham College and the University of Pennsylvania before doing postgraduate studies in Paris, Berlin and Vienna.  In addition to his medical degree he held doctorates in science and law and was a Doctor of Letters.  A highly religious Roman Catholic, he had entered the Jesuits in 1885, but was forced to resign six years later because of poor health.

Now, as Dean and Professor of the History of Medicine and Nervous Diseases at Fordham University's School of Medicine, he was highly respected in the medical community.  But it was Walsh's indefatigable writing for which he was best known.   He was the author of dozens of books.  And his seemingly endless list of articles covered a broad range of subjects, from biographical topics like "Audubon the Naturalist," in 1904 and "Boniface VIII" in 1905, to the historical, like "Science at the Medieval Universities" in 1911, and theological and philosophical subjects.


Walsh's conservative views and seemingly brash stances were often controversial.  But he never wavered in his opinions.  In 1910, after The American Magazine published the autobiography of social worker Jane Addams, Walsh sent her a copy of his recently-published The Thirteenth Century, noting "It is a favorite thesis of mine that men do not develop."  Indeed, his theory that civilization had not progressed beyond the Middle Ages would reappear repeatedly for decades.

Two months before sending that book to Addams, Walsh addressed members of the National League for the Civic Education of Women at the Colony Club on February 10.  He started out explaining, again, that there was nothing new in the world.  "Surely, no one would say we are making many improvements in the matter of literature."  He asserted that current writers depended on the plots of Shakespeare, Sophocles and Aeschylus for their inspiration.

"Our architecture is beautiful, but not our own; the Cathedral in Morningside Heights [St. John the Divine] has a twelfth century design, and the Cathedral in Fifth Avenue [St. Patrick's] copies the thirteenth.  No one now discusses such deep matters as Plato."  He did concede, however, that modern man had made progress in "the transportation of the human body and voice,."

But when he turned to Women's Suffrage he no doubt insulted the majority of the mostly female audience.  He pointed to historic evidence that women had earned power in government and medicine, for example, throughout the ages; but had always lost interest.  So, he concluded, if women did earn the right to vote, they would become bored after awhile and not use it.  He blamed feminine nature.

"There seems to be a biological law that the women who take an interest in things outside the home get rubbed out.  It is not the Creator who does it, but nature."  Nature, he said, did not want women in control.  "Just as after the tremendous slaughter of men in the Thirty Years' War and the siege of Paris nature adjusted the balance by a sudden rise in the male birth rate, so she seems not to want women to get away from domestic habits and in her own way manages things."

The First World War merely sharpened Walsh's opinion that man had stopped progressing.  The fact that countries settled differences with violence and death rather than logic and discussion, he said, proved the point.

But another somewhat radical idea, at least to Edwardian minds, came to light during a lecture in August 1917.  Journalist Marguerite Mooers Marshall reported on August 29 "in Detroit the other day Dr. Walsh scoffed sturdily at the fetish of ultra-cleanliness."  She explained to her readers "Physiologist, physiologist, and historian, Dr. Walsh is one of the most eminent of American scholars."

Marshall searched him out for a one-on-one interview.  Walsh blamed too much bathing for American problems with pornography, divorce, and prostitution.  He pointed out that Shakespeare's London was dirty and its citizens rarely took a bath.  "But Shakespeare never wrote a sex problem play."

"Our minds are unclean because they are preoccupied with our bodies and with all that relates to our bodies," he explained.  "We think and talk about sex novels, problem plays, birth control, sex hygiene, divorce, white slavery and other topics of the same nature."

Among his many honors, one of the greatest was the dinner held in his honor by the Catholic Writers' Guild of America on May 10, 1929 in the Plaza Hotel.  The Times said he "was hailed last night as an apostle of tolerance, good-will and knowledge" at the event.  More than 1,000 guests were present.  The influential speakers included Cardinal Patrick Joseph Hayes, United States Senator David I. Walsh, and former General James G. Harbord, now president of RCA.

The new owners of No. 110 West 74th Street immediately converted it to furnished rooms and small apartments.  The stoop was removed in the process and the entrance lowered to the basement level.  In 1976 it was renovated again, resulting in two apartments per floor.


Despite the abuse, the integrity of Thom & Wilson's delightful medley of styles survives.  And the unexpected Grecian lyre player still graces its Moorish-arched niche. 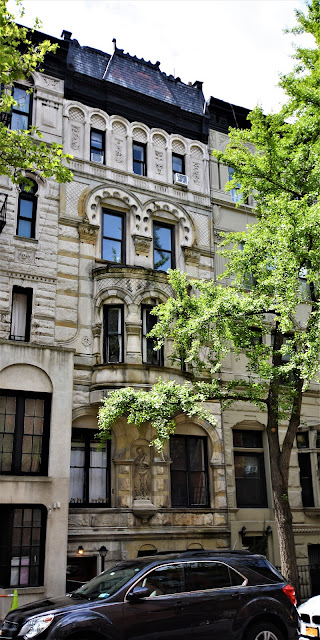