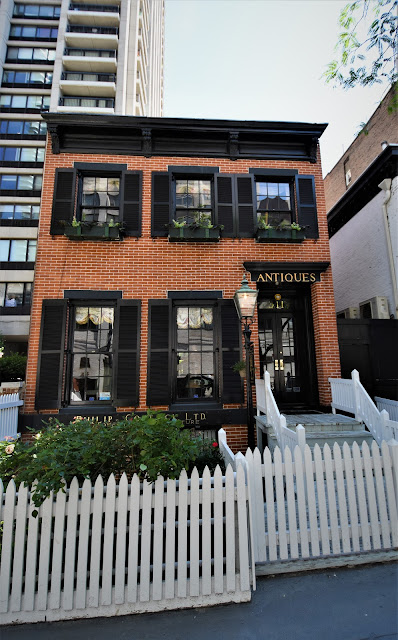 Abijah Pell, Jr. was born in New York City on November 8, 1811.   His was an important family, tracing its roots in America to the 17th century.  John Pell inherited the Pelham estate from his uncle, Thomas Pell, in 1670, and became the first lord of Pelham Manor.

Abijah's parents, Abijah and Mary Baldwin Pell, owned considerable land in Greenwich Village and when the elder Abijah died in 1826 his seven children--five sons and a daughter--shared equally in the sizable estate.

In the decade before the outbreak of Civil War spotty development was taking place along East 58th Street near the East River; until only recently green farmland.  Tax records indicate a house appeared by 1857 at what could be numbered 311 East 58th Street, when title to the property was in name of Charles Shute Pell.

It does not appear that Charles ever lived in the quaint brick-faced house.  He and his wife, both educators, were appointed superintendents of the New-York Orphan Asylum by 1857 and as such would have living quarters there.

Instead his brother, Abijah, listed his address as "East 58th near 2nd" in the early 1860s.   As a matter of fact, it may have been Abijah who constructed the house.  He was described as "a leading builder of his day" by The Memorial Cyclopedia decades later.  Pell was married to Eliza Brown Ward.  She was the first cousin of New Jersey Governor Marcus Ward.  The couple had three sons, Abijah, William and Charles.

Despite their lofty pedigree, the extended Pell family was apparently well in tune with the condition of the less fortunate.  Both Charles and Abijah were long-term members of The New York Association for the Improvement of the Condition of the Poor, for instance.  Nevertheless, they moved socially among their peers.  All the Pell brothers were members of the venerable St. Nicholas Society which included only men descended from New York's earliest families.

When Abijah's 48-year old brother, Aaron, died on November 8, 1861 of consumption, his funeral was held in the 58th Street house two days later.

Abijah had joined the Union Army only a month earlier.  When a comrade, John R. Hobby, died "of disease contracted in the army," on October 20, 1865, once again a funeral was held in the Pells' parlor.  The notice instructed mourners it was "second house east of 2d-av."

In the spring of 1870 the Park Commissioners directed the North and East River Company and the Central Park Railroad Company to lay "double tracks in Fifty-eighth-street."  The intention was to provide a crosstown connection between the First Avenue and Eleventh Avenue streetcars.  Local protest was quick and forceful, with Abijah Pell leading the charge.

On May 7 "a large number of property-owners" met at the Terrace Garden, on 58th Street near Third Avenue.  The New York Times reported they gathered "for the purpose of protesting against the laying of a track for a horse-car railroad in that street."

Abijah Pell presided that evening.  Among the results of the meeting was the formation of a committee to raise funds for an expected legal battle.

Three years later Abijah Pell died in a bizarre and tragic accident in Newark, New Jersey.  On Saturday morning, April 19, 1873, was run over by the "pusher," or engine used to move train cars.  He died the following day.

The 58th Street house was sold to John B. Huse and his wife, Emma.  Huse was a printer with a shop on Hudson Street.  He also apparently dabbled in real estate.  In September 1873 he advertised "A store to let on Seventh Avenue--inquire at 311 East Fifty-eighth street, or in confectionery, No. 9 Seventh avenue."   Huse was adamant that his property would not be used as a saloon.  His ad stressed "will not be rented for liquor store."

Although the Prussian-born Down was listed as a merchant, his main income most likely came from the several tenements he owned throughout the city.   In February 1890 he commissioned architect Charles Stagmeyer to add a two-story extension to the rear at a cost of $1,500.  The enlargement may have had to do with Down's grandson, Mathias Herman J. Weiden's moving in.  Both Down and Weiden were listed in the house in the 1890s.

Weiden (who went by the name Herman) and his wife, Margaret, had one child, Josephine, who was born in 1906.  He was active in New York's German community and served on the Executive Committee of the National Federation of German-American Catholics during the World War I years.  Despite anti-German sentiments during the war, it often went by the name of the Catholic Central Verein of America.  Weiden would remain an active member through the 1950s.

It appears that Margaret had died by 1920 when only Weiden and Josephine were listed as living in the 58th Street house.   His marriage on Wednesday, February 15, 1928 was marred by tragedy when Catherine McMurray, his new mother-in-law, died two days later in her Brooklyn home.


On December 30, 1950 The New York Times reported "After seventy-three years in the family of Mathias Weiden, the two story brick dwelling...at 311 East Fifty-eighth Street has been purchased by Charles Jones, music composer, for occupancy."

The musician moved in with his wife, Sally.  Born in Canada in 1910, he had come to the United States at the age of 18 to study violin at the Juilliard School (his father, incidentally, was an American citizen).   He became a pupil of, and then assistant to Darius Milhaud at Mills College in Oakland, California.  The two worked together at the Aspen Music School where Jones became Director in 1970.

Throughout his career he also taught at the Music Academy of the West in Santa Barbara, the Juilliard School and the Mannes College of Music.  His compositions included an oratorio on Piers Plowman, four symphonies, and nine string quartets.

Jones was still teaching composition at Mannes and Juilliard when he died from complications of heart surgery in June 1997.  The remarkably-surviving little house was sold the following year to The Philip Colleck Gallery for $1.1 million.  The gallery, established in the 1930s, deals in 18th century English antiques.

According to the firm's president, Mark Jacoby, several months after the purchase "Part of the charm of the building is that it has its original doors, mahogany banisters and wide pine floors, all of which we're keeping.  We're keeping the room configurations as well.  There are seven different fireplaces on the three floors, and a large rear garden that we're going to beautify."

The new owners hired architect Peter M. Bernholz to design the gallery.  At the same time the coat of what Jacoby described as "old blueberry-yogurt paint" was removed from the brickwork. 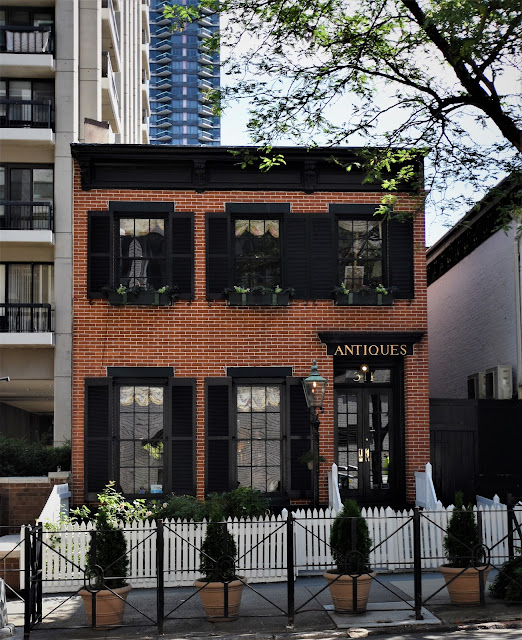 As if the history of the house were not amazing enough, local lore insists that Tennessee Williams rented a room here in the 1930s.  In fact, he lived across the street at No. 316.  And that is perfectly fine.  The remarkable survivor does not need a celebrity to stand out; its excruciating charm is enough.