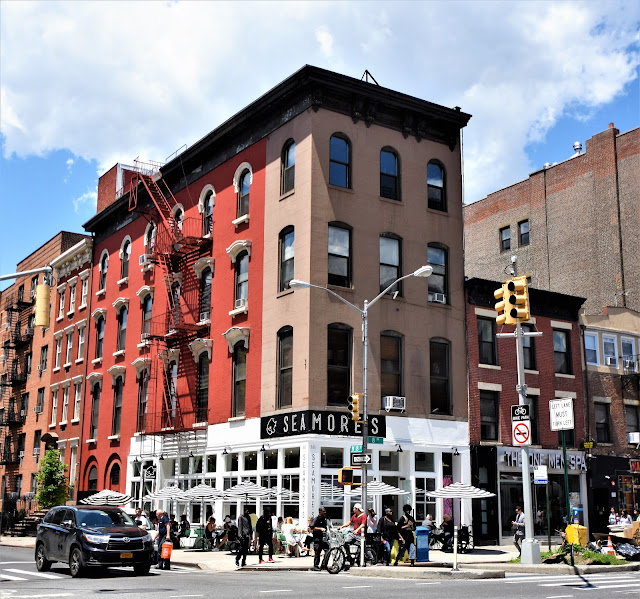 In 1852 Jacob Kiefer ran his butcher shop from the ground floor of the little building at the northwest corner of 18th Street and Eighth Avenue, while he and his family lived upstairs.  It sat on what had been the northern boundary between the George Rapelje farm and the country estate of the Moore family, Chelsea.

Eighth Avenue had been laid through the properties in 1816, signaling the end of bucolic life here.  In 1825 Rapelje's grandson and his wife, Susannah, began selling off the farmland as building plots.

By the time Kiefer opened his butcher shop, the Chelsea district had blossomed into a vibrant suburb.  Abraham J. Post ran operated his clothing business at No. 112 Ninth Avenue and, like the Kiefers, the family lived in the same building.  Directly across the street at No. 113 Ninth Avenue lived Peter J. Post and his family.

Abraham Post was well regarded in the community, and so when the Swill-Milk Committee of the Board of Health held a hearing concerning Johnson's Sons' 16th Street stables on May 31, 1858, it asked Post's opinion.  He visited the cowshed with a clergyman (no doubt to support his veracity) in April.  When sworn in, he testified diplomatically.

He said the place was "as cleanly, he thought, as any cow-stable in the country."  But when he described the animals, he expertly managed to expose their sorry condition without sounding offensive.  "The cows all appeared to be in first-rate order except one, which had a sore on the leg, two which were sick, and several which were lean, and which, it was said, had just been received into the stables."  When pressured he admitted he would not drink the milk.

In 1859 Kiefer's building was replaced by an impressive new four story structure.  The Italianate-style building was faced in brownstone on the Eighth Avenue front, and red brick along the side.  Elliptical arched openings on the second and third floor gave way to fully-arched windows at the fourth.  All were embellished with elaborate hooded lintels and projecting sills upheld by tiny brackets.  An Italianate cornice with leafy paired brackets completed the design.

The ground floor housed a retail store, while the upper floors were all large meeting rooms.  No. 161 Eighth Avenue was almost assuredly the most imposing Chelsea structure at the time.   Abraham Post moved his clothing store into the new building.  He simultaneously moved his family half a block south, to No. 151 Eighth Avenue.

Mary Van Darn stopped by Post's store in November 1861.  The 50-year old French immigrant slipped out without paying for her item, but did not get far.  On November 25 she pleaded guilty to petty larceny and was sent to the City Prison for 60 days.

By 1865 Peter J. Post, who was a tailor, joined his father in the Eighth Avenue business, now renamed A. J. Post & Son.   That year, in June, the extended Post family--20 in total including Abraham's wife, Maria, and all their other children; along with Peter, and his family--donated $1 each toward the erection of a monument to Abraham Lincoln.  Their combined contribution would equal about $300 today.

In the meantime the upper floors were regularly used by political groups and social groups.  The 13th Assembly District would meet here for decades.  With the end of the Civil War came the question of black votes.  The group took up the question in a meeting on July 22, 1868.

Eugene O'Shea, who was the editor of the Irish Republic, eloquently said, according to The New York Times, "There was but one God and one heaven, where we all hope to go.  Is it likely that God will make distinctions of color among those he receives into his dwelling place?  And if God receives a colored man to his embrace, is not a colored man fit to vote for a dirty City politician?"

No. 161 was also the meeting place for the Masons.  By 1869 the Templar Lodge, No. 203 had taken rooms.  On May 27 that year it was the scene of the funeral of member Matthew Gilleland--perhaps the first of what would be a long tradition of funerals in the building.

Other Masonic lodges used the building--the Union Chapter, the Scotia Lodge, and the Pyramid Lodge all leased space through the 1870s and '80s; each holding both meetings and funerals in the upper floors.

A. J. Post & Son was gone from the building by about 1870.  The space was used by a variety of stores which drew little attention, until 1899.  That year in September a committee of the Tammany Hall organization of the 7th Assembly District protested to the Board of Health against the proposed new tenant:  the Stephen Merritt Automobile and Cremation Company.

The Stephen Merritt undertaking business was generations old.  Well respected, it had conducted the funerals of Ulysses S. Grant, General William Jenkins Worth, and Mrs. Booth-Tucker (the Commander of the Salvation Army), among other noted persons.


In 1897 it opened its newest place of business at Nos. 241-243 West 23rd Street and now eyed No. 161 Eighth Avenue for a new crematory.  But the powerful Tammany organization foiled the plans--at least for now.

Instead the ground floor became home to a less chill-inducing business, Anderson's Tea and Coffee shop.   The highly-successful and popular Anderson's had 17 outlets in Manhattan and Brooklyn in 1903.   That year, in June, the firm offered a new marketing gimmick--Sperry & Hutchinson's Green Trading Stamps.  Patrons were given a quantity of stamps based on the amount of their purchases.  Later better known as S & H Green stamps, they could be exchanged for premiums.

In 1910 the building was leased to The Chelsea Club, which operated the upper floors as Chelsea Hall.  Masonic lodges were gone from the assembly rooms, but political meetings were not.   Labor conflicts in the early years of the 20th century were often violent, and such was the case when the express drivers went on strike in October 1910.

Police guarded all truck routes to the ferries and railroads to protect strike-breaking truckmen.  The New York Times reported on November 1, "The police were massed in such great numbers in the danger zone that violence here was out of the question, yet despite all this protection and vigilance there were a number of outbreaks reported from various parts of the city, one of them a serious stabbing case in which the victim was a man in no way concerned in the strike."

The article listed the names of six men who were "the worst injured."  They had been beaten, struck with rocks or bricks, and in the one case, stabbed.   Union organizers and members met at Chelsea Hall on October 31 to discuss their options.

Five months later the stalemate continued.  On March 15, 1911 The Times reported on the "stormy meeting" of the International Brotherhood of Teamsters of New York and Jersey City in Chelsea Hall the night before.  William H. Ashton told reporters after the meeting, which lasted until after midnight, "it will be a fight to a finish.  There are many grievances which the strikers have and of which the public know nothing.  We have gone slow in this matter, but the time has now come when the unions will have to act for their own self-preservation."

While the building had escaped having a crematory on the ground floor, in 1919 the Stephen Merritt Burial Company opened its "mortuary chapel."  Although the firm would survive until 1967, the funeral home would remain here only until the mid-1920s.   Among the last funerals of noted New Yorkers here were the 1924 services for award-winning engraver Harry Davidson, and former comedian and minstrel performer James Hoey.


The funeral parlor was replaced by John Connors furniture store.  The firm installed a massive three-story blade sign that could not be missed along Eighth Avenue for blocks.

The second half of the 20th century saw a serious decline in the Chelsea neighborhood.  Crime was a constant problem and gangs roamed the blocks.  At some point the Victorian detailing was stripped from the openings on the front of No. 161 Eighth Avenue in an effort to modernize. 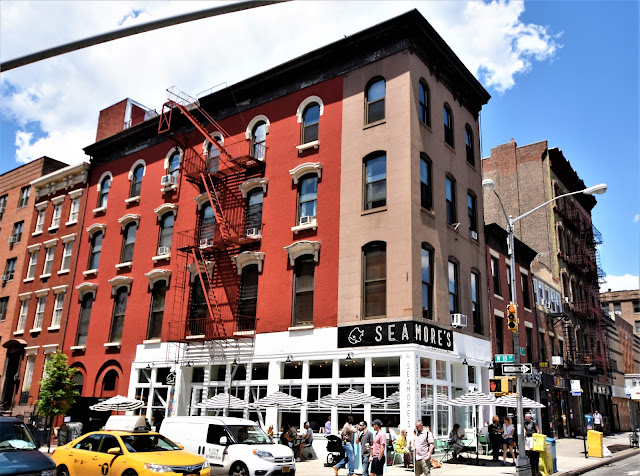 The neighborhood experienced a renaissance as the century drew to a close.  Today the much-altered ground floor is a trendy restaurant and the upper floors have been converted to residential space; one sprawling loft apartment per floor.  Once a symbol of Chelsea's proud status as a newly-established suburb, the building's fascinating history is essentially forgotten.