The Surprising Survivor at 25 Bridge Street 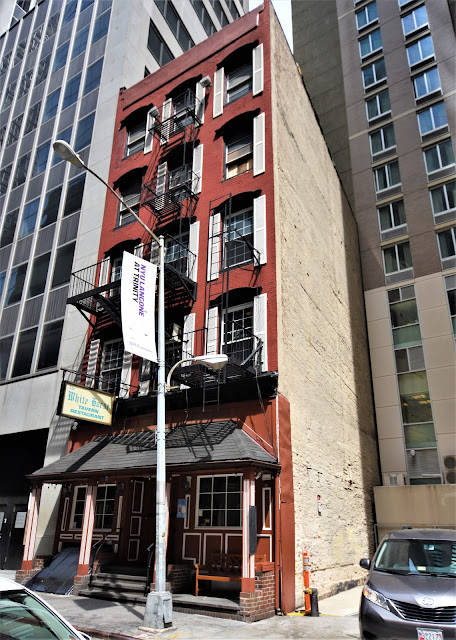 In the decade before the Civil War the three-story house at No. 25 Bridge Street, like most surviving residences in the now-commercial neighborhood, was being operated as a rooming house.  In 1852 James Martindale lived on the top floor.  He came home in June 1852 to find his rooms rifled and $104 missing.  The thief, John David, was arrested on June 16 and charged with burglary and larceny.

The incident may have prompted Mardindale to begin carrying his money with him.  That, too, proved a mistake.  He worked as a janitor in the Mechanic's Bank building at Nos. 8 and 10 Wall Street.  While working in October 1859, he somehow dropped his purse.  His advertisement in The New York Herald explained "Lost--While working in front of the Mechanic's Bank, Wall street, $160 in gold--five $20 pieces and twenty four $2.50 pieces.  The finder will be liberally rewarded."  The $160 would translate to about $4,700 today; and Martindale's hope that the finder would return the gold for a lesser reward was optimistic at best.

Although certainly no longer on a quiet residential street, the 24-foot wide house still attracted respectable boarders.  In 1860, for instance, broker Thomas E. Doremus lived here.  He would later become president of the Safeguard Fire Insurance Company.  But the end of the line for the old house was on the horizon.

By 1869 it had been replaced with a five-story warehouse and store building.  Owned by Elizabeth Whitlock, the Italianate style structure was faced in brick and boasted minimal decoration--like the eliptical arched cast iron lintels and, no doubt, a cast metal cornice.  When Elizabeth purchased the building directly across the street at No. 26 that year, she sold No. 25 to Amelia Whitlock, possibly her sister.  Amelia paid $15,000 for the property, in the neighborhood of $270,000 today.

The building became headquarter of Loewenthal Bros., commission merchants.  Dealers in a broad and curious array of goods, the firm advertised as far away as Texas.  An advertisement in The Galveston News on August 15, 1883 urged customers to "realize highest market prices for all kinds of bones, horns, rags, hides, old rubber shoes, waste cotton, wool, etc. etc."

At the time there were just two other tenants in the structure.  The top two floors were occupied by John Collins, "dealer in cotton pickings;" and John H. Haskell dealt in bags.  The tightly-packed stores of cotton in the Collins operation caused considerable problems to responders when fire broke out on the fourth floor around 8:00 on the evening of January 4, 1884.

The New York Times reported "The stock was not a very valuable one, but the fire smoldered through the mass and kept the firemen busy for two hours.  They fought it with hooks and brooms, as well as water, and the copings of the windows and doors of the adjoining buildings seemed to be covered with snow, where the cotton thrown from the windows of the burning building had lodged."

Collins suffered $600 in losses, Haskell and Loewenthall Brothers lost about $200 each, and damage to the building was estimated at about $200 (about $5,000 today).

John Collins was gone from the building by 1891, replaced by Percy Kent's "fancy bag factory."  Directly behind the building--just feet away at the closest parts--was Engine Company No. 10's fire house.  Considering the Collins fire, it seemed like a comforting neighbor.

Then, at around 9:30 on the night of October 4, 1891, fire broke out on the fourth floor again.  As soon as it was discovered, a boy was sent running around the block to notify the firemen.  But when the engine was brought around to Bridge Street, the firefighters could not find the fire.  They turned around and went home.

"By this time," reported The New York Times, "the flames had broken out in the rear and the smoke was pouring down into the engine house."  In the meantime, another alarm had been sent from a nearby box on Broad Street, resulting in Engine Co. No. 4 on Liberty Street to respond.

That unit "came dashing down Broad Street" and "put out the flames before No. 10 had waked up to the fact that there really was a fire," said The Times.  The newspaper was scathing in its report.  "The company's stupidity can only be explained by the fact that, being down at the lower end of the city, and having comparatively few fires to go to, the men have become rusty."

By the mid 1890s other manufacturers were turning out jute and burlap bags.  That may have contributed to Percy Kent's broadening its product line to include items like cement bags by 1900.

In 1904 the City purchased by No. 25 Bridge Street for $35,000.  The seemingly high price would be equal to more than $950,000 today.    Exactly what the City used the property for is unclear; but in 1922 City Controller Craig announced the sale of 202 parcels including No. 25 Bridge Street.  The Real Estate Record & Builders' Guide pointed out "The lot includes property abandoned by the police, fire, water supply and educational departments."  The advertised "upset price" for the Bridge Street building was $65,000.

An auction sale was held on August 9, 1922.  There were no bids on No. 25 Bridge Street.  It was  put on the block again on August 28, and again there was no interest.  Finally in 1930 the City sold the building to George W. Butler.  By now the Victorian warehouses along Bridge Street were being replaced with modern structures; only to be supplanted be sleek steel and glass skyscrapers.  But No. 25 remained unnoticed.

In 1962 the ground floor was converted to a restaurant.  The cast iron store front was covered over with a facade more expected in a midwestern Cracker Barrel restaurant, right down to the porch and shingled roof.  At some point the Italianate cornice was lost.


As early as 1994 the restaurant space was home to the White House Tavern, a favorite watering hole for Financial District workers.  The brick facade was been painted brick red, perhaps to make it look more like brick; and decorative shutters which do not fit the openings have been nailed on.   Despite the unsympathetic treatment, the little loft building is the sole surviving 19th century structure in the immediate neighborhood--most likely due to the City's ownership in the critical years of 20th century development.