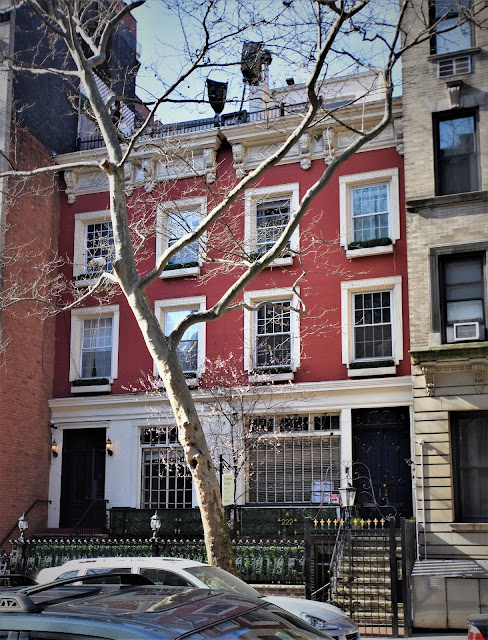 In 1839 the grid of streets and avenues, laid out in the Commissioners' Plan in 1811, began slicing up the farmland in the district known as Yorkville.   The New York and Harlem Railroad had been extended along Fourth Avenue (later Park Avenue) two years earlier, with a station at 86th Street.   The neighborhood became even more accessible in 1852 when the Third Avenue Railway System opened streetcar service.

The residents of Yorkville were mostly blue collar immigrants from Germany and Ireland.   But some were more affluent--shopkeepers and factory owners, for instance.  Two mirror-image houses were built on East 83rd Street in the years just before the outbreak of the Civil War that targeted the latter.

Mirror images, Nos. 222 and 224 East 83rd Street, between Second and Third Avenues, were three stories tall above a shallow English basement.  Faced in brick, they sat back from the property line, creating garden space between the stoops.  Each two bays wide, they were crowned by wooden Italianate cornices supported by ornate leafy brackets with paneled friezes.

If the house next door was still a private residence in 1880, that was about to come to an end.  Real estate operator Eliza Gardner purchased it at foreclosure auction in December that year, paying $5,500--five dollars more than the amount due on the mortgage.  Although Gardner lived in Paramus, New Jersey, she regularly invested in Manhattan properties.

James E. Morrissey, who had been a clerk in the Tombs Prison for more than three years, was married in November 1894.  He and his bride boarded at No. 222.    Two months later, on the evening of January 14, 1895, he left work "apparently in perfect health," according to The New York Times.  But the following morning his wife found him dead in their bed.  The newspaper reported "It is supposed that his death was caused by heart disease."

A little over a decade later the houses would be struck by a string of deaths.  In 1910 the Bureau of Census reported increases in fatalities from typhoid fever, measles, and influenza.   It may have been these rampant diseases that caused the succession of funerals that were held in Nos. 222 and 224 beginning in 1909. 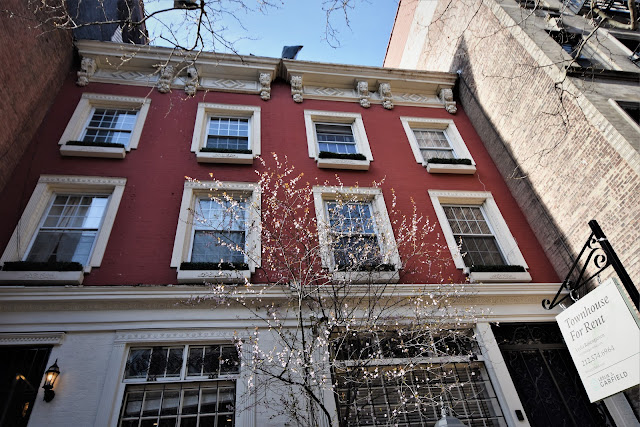 The Great Depression brought change to the two boarding houses.  Architect Lloyd E. Mellor converted No. 224 "for business" that year.  No. 222 was already home to the Flatiron Window Cleaning Company.  One of its employees, 55-year old Walter Tholin, was killed on September 21 that year when he lost his balance and fell from a window ledge on the fourth floor of C. H. Gallagher's brownstone house at No. 141 East 47th Street.

The conversions of the lower floors of both houses resulted in broad shop windows and a modest cornice at the parlor level.  The stoops and the upper floors were left intact.

In 1960 No. 224 was converted to two apartments; while its next door neighbor continued to be home to small businesses--the Veteran's Caning shop in the 1960s, followed by Such Outlandish Stitches, which described itself as "a miraculous boutique."

Then in 1974 it, too, was converted to a parlor floor apartment below a duplex, with a florist shop in the basement.  The greatest change came in 2005, however, when the interior walls were broken through and the joined houses became a single family residence.

It was most likely at this time that the architecturally-incongruous, neo-Classical inspired surrounds were tacked to the upper story openings.  Oddly, their fluted pilasters abruptly end with no bases; making them appear almost like skinny shutters. 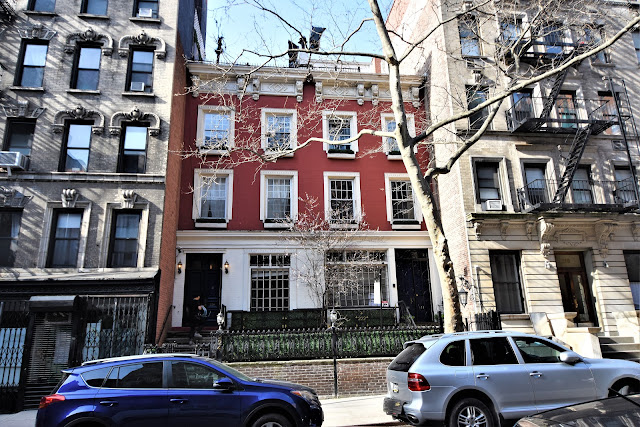 Despite the alterations, the quaint garden-fronted pair, nestled back between apartment buildings, create a charming Victorian scene.