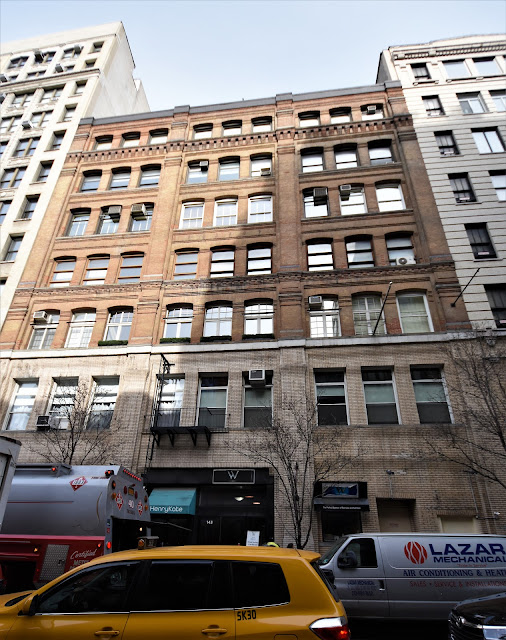 In 1862 Frederick A. Kursheedt took a job in a trimmings factory at the age of 16.  The diligent young man thoroughly learned the business.  By 1882 he was president of his own firm and had been awarded patents for time and labor savings inventions like his "fluting machine" and "plaiting machine," both of which produced pleats in fabrics.

That year in February prominent architect Robert Mook filed plans for a "seven-story brick factory" to replace the old buildings at Nos. 145 through 149 West 19th Street.  Frederick Kursheedt had come a long way in twenty years.  The cost of his new structure was projected at $55,000; more than $1.3 million today.

Mook created an attractive, industrial building faced in beige brick with minimal stone trim.  Its three sections were separated vertically by shallow pilasters.  The brick was used to give texture and interest in the form of bandcourses, capitals, and cornices.  Especially eye-catching was the corbel table between the sixth and seventh floors, which seemed to delightfully echo the campanile of the Palazzo Pubblico in Tuscany.


The Kursheedt Manufacturing Company produced a variety of trimmings used by garment manufacturers--plaitings, braids, laces, buttons, and embroideries, for instance.   Here hundreds of workers, many of them young girls, worked at a myriad of specialized machines.  The building also contained Kursheedt's extensive library of pattern books; books of antique textile designs, and photographs of European and American embroideries and laces from as early as the Renaissance.

As was the case with most wealthy businessmen, Kursheedt held directorships in other concerns.  While the Kursheedt Manufacturing Company weathered the devastating Financial Panic of 1893, the Madison Square Bank was not so lucky.  The bank failed and warrants were issued to its officers and directors to appear before a grand jury in October--including Frederick A. Kursheedt.  There was, it seems, a question about the legality of $50,000 in securities that had been sold and a lawsuit to recover $750,000 in funds.

Getting the men to appear in court was a challenge.  On October 26 The Sun ran the headline "All The Directors Bailed" and reported "On Tuesday afternoon District Attorney Nicoll was informed that Director Frederick A. Kursheedt was too ill to leave his room at the Imperial Hotel."  Nicoll was prepared to hold him on a $5,000 bail (more than $135,000 in today's dollars); the same amount as the other directors.

Nicoll lost patience with the men and within the month doubled their bail--except for the bank's president whose bond was set at $25,000.  It would seem that The Evening World had already decided the men's guilt when it reported on November 28 "How many others were implicated in the looting of the institution was still a mystery" and advised "The prospect of additional developments in the case to-day had aroused curiosity to the highest pitch.  It was known that several other indictments were brought in yesterday in connection with the 'wrecking' of the Madison Square Bank."

Kursheedt had nothing to say to reporters.  Attorneys merely noted "that it was a very disagreeable piece of business."

Frederick Kursheedt survived the years-long case with only a temporarily bruised reputation.  In the meantime the Kursheedt Manufacturing Company enjoyed such success that in 1906 architects Davis, McGrath & Shepard were commissioned to design an annex next door.  On February 10 the Real Estate Record & Builders' Guide reported "A new loft building, to be known as the Kursheedt Building, will be erected at Nos. 139 to 141 West 19th st....The front will be faced with light buff brick and Indiana limestone."

The architects renovated the lower two floors of the existing Kursheedt Building to match; replacing with brown brick with beige and updating the openings to more or less meld with the new building.


Frederick A. Kursheedt died in 1910 and an auction was held on October 10 to liquidate the estate.  The two buildings, which shared heating and electricity, were to be sold as a package.   The auction was unsuccessful and it would be two decades before the property was sold.  While the Kursheedt Manufacturing Company remained in business until 1912, when it was absorbed by Einstein,Wolff, & Co., it left West 19th Street for No. 356 West Broadway.

The floors of the Kursheedt Building were leased to smaller manufacturers.  In 1913 The American Clothes Drying Company took the ground floor for its showroom.   Founded in 1903 it manufactured driers for houses, apartment buildings and institutions such as "police stations, fire engine houses, [and] post offices."

The American Clothes Dryer Company's appliances had nothing in common with those used today.  The housewife who purchased the residential model could expect to give up a hefty amount of floor space.  And the larger affairs--used in apartment houses, for instance--were the size of a large room.  Decades before the tumbler was invented, clothes were draped over aluminum bars on asbestos-filled frames which then slid into super-heated compartments.

Although the upper lofts were occupied mostly by apparel making firms, there was one glaring exception in 1923.  Trouville & Co. was a brokerage firm and its unlikely location, far from Wall Street, was most likely explained late that year.

The first years of the 1920s saw stocks rising rapidly.  The prospect of quick riches and brokers' offering the purchase of shares with small down payments--some as low as 10 percent--soon had ordinary citizens gambling their savings.  One was a Mrs. Huey, who opened an account with Trouville & Co. on March 22, 1923. She placed an order for 100 shares of Kelly-Springfield Tire.

Two days later she received her confirmation that her purchase, totaling $6,035.31, had been made.  Then came the insistent demands from Vernon Victor Trouville for money.  She sent cash and securities totally around $4,000; but then asked for her certificates before providing the balance.

That caused a problem for Trouville, who according to Mrs. Huey's attorney, Edwin A. Falk, "presumably never having purchased same, was unable to deliver."

The incident sparked an investigation which landed Vernon Trouville in trouble.  Attorney General Carl Sherman filed a complaint that said in part "The defendant has been conducting a bucket shop and has made no bona fide purchase, and sale of securities when orders were placed with him."

Upstairs the Crown Piece Dyeing Company had a particularly talented employee.  Max Berman had owned his own small tailoring shop on East 115th Street in the early 1920s.  His debts had accumulated to several hundred dollars, so he applied for a porter's job here.  Now he earned $20 a week doing janitorial work.  He later told a reporter "my wife and three children were actually facing starvation.  I saw an advertisement that Mr. Geller wanted help and I applied, and when he heard my story he gave me a job, although he didn't need me."

Berman's most pronounced talents were neither tailoring nor sweeping.  It was his voice.  Back on East 115th Street he had been known as the "singing tailor."  Now, in April 1923 he made his debut at Carnegie Hall.

Despite what The Indianapolis Star later deemed "rave reviews," the concert initially seemed a tarnished success.  Berman had to pay $100 for the tickets, himself, and his take was just $33.  On the bright side, he told a New York Times reporter "Right now I have a chance for four engagements at $500 each in Chicago."

The singing janitor went on to operatic success and today the Max Berman Prize for vocal excellence is still awarded annually by the Cleveland Institute of Music.

Other similar garment factories like Star Piece Dyeing and Finishing occupied the former Kursheedt Building until the garment district moved north of 34th Street.  It became home to a more diverse list of tenants, like Norton Centerpieces, Inc. which moved in in 1950; and the School of Printing in 1970. 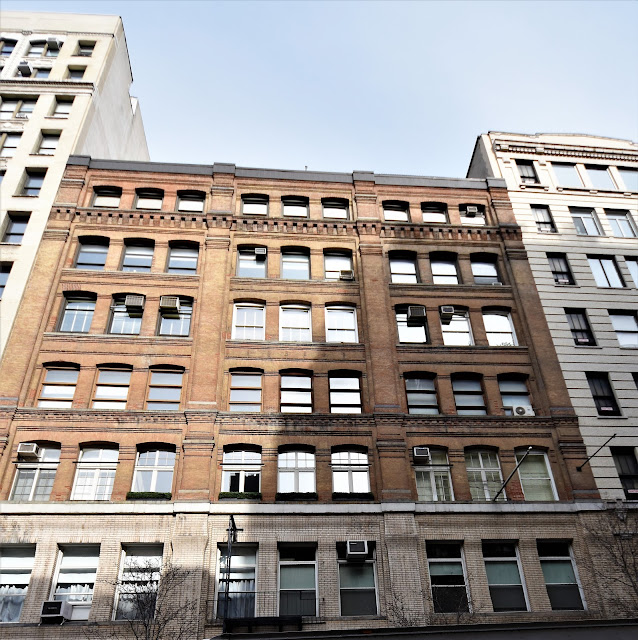 Then in 1981 the upper floors were converted for residential use--just two massive apartments per floor.  Although the 1906 renovations of first and second floors are regrettably bland, and the later entrance can be described as functional; Robert Mook's upper section deserves a look up.

photographs by the author
Posted by Tom Miller at 3:45 AM