In April 1891 architect George Fred Pelham filed plans for seven "three-story and basement stone dwellings" on the south side of West 71st Street, between Amsterdam and West End Avenues for developers Edelmeyer & Morgan.  Each house was projected to cost $12,000, or about $322,000 today.

Completed in 1892, Pelham had designed them in a restrained version of Romanesque Revival.  Stretching from No. 212 to 224, it appears their mostly subtle differences were arranged in an A-B-C-D-C-B-A arrangement.

The last of the houses was sold by Edelmeyer & Morgan in October 1892.  The $24,000 price for each doubled the developers' investment.  No. 212 was purchased by attorney Eugene Van Schaick and his wife, the former Sarah Howland.

The couple had been married six years when they moved into the house.  Sarah, apparently not content to sit at home, dabbled in real estate.   The same month that they bought No. 212, Sarah sold the three houses at Nos. 152, 154 and 160 West 65th Street to George Moore.  The lucrative contract totaled $83,450; about $2.25 million today.

When John W. Merriam and his wife, Louise, purchased the house in 1905, it was assessed at $21,000.  John was the principal in Merriam Segars, Inc.  The title was put in the name of Louise, and she immediately set out to made significant changes.

On September 22 that year architect Carlton Strong filed plans for $12,000 in alterations.  In part, they included "new plumbing, tubs, entrance and rear addition."   The new entrance mentioned in the plans involved removing the brownstone stoop and lowering the doorway to the former English basement level, a few steps below sidewalk level.   Based on the extent of the renovations--equaling a third of a million dollars today--it was doubtless that at this time the projecting bay with its tiny panes and stained glass insets was installed.  The upper two floors remained unchanged.


The new "tubs," plural, suggest that the Merriams intended to operate a rooming house here.  And, in fact, although the couple continued to live here, when they sold No. 212 in December 1915 to the Ellay Realty Co. it was termed a "tenement."

Five years later Prohibition was enacted.  New York City saw the emergence of speakeasies, many of them elegant night clubs patronized by the wealthy and powerful.  Official estimates placed the number of illegal drinking establishments in the city at an astonishing 20,000 to 100,000.  Some, like the Puncheon club on 49th Street, were protected by high, substantial iron fencing that slowed down raiding agents.  (The Puncheon's handsome fencing survives in front of The 21 Club on West 52nd Street in Midtown.)

Before long a similar fence, around six feet tall, surrounded the areaway of No. 212 West 71st Street.  Now owned by William Kemp Kay, the house had been remodeled into a swanky nightclub, the Iron Gate.  The New York Times described the layout, saying "The basement is used as a kitchen, the first floor has a dance floor, foyer and bar; the second a lounging room and woman's bar, the third floor booths and the fourth a storeroom."

No small affair, the Iron Gate employed 20 hostesses per shift in 1932, as well as musicians, dancers, chefs and others.  Dorothy McCoy and Anita Corbin worked at the Iron Gate that year.  The last thing proprietors of speakeasies wanted was publicity; so William Kemp Kay was no doubt annoyed when the women, both 22-years old, were arrested on September 12 that year.   Described by The New York Times as "two night club dancers," the women had been in the automobile of Harvey Lyons on August 25 when it plowed into a group of children in New Jersey.

Several children were injured and 8-year old Dorothy Balamie died.  At the time Lyons was arrested; but, according to the newspaper "asserted that one of the dancers was at the wheel at the time.  Both denied having driven the automobile."

It may have been that tragic incident that drew federal interest to West 71st Street.  On December 23 six undercover prohibition agents posed as customers.  Once served, they flashed their badges and arrested Kay, his manager, the bartender, Joseph Parroti, and two waiters, Leo Alfond and Leo Weisslitz.  Fifty bottles of liquor were confiscated.  The Times reported "a capacity crowd of guests were not disturbed.

It appears it was not Prohibition, but the disgruntled neighbors who brought an end to the Iron Gate.  On October 3, 1935 The New York Times reported "The Iron Gate, a restaurant and bar at 212 West Seventy-first Street, said to have been a favorite resort of former Mayor James J. Walker, was the object of the action brought by the Neighborhood League for Noise Prevention."

Dr. Maurice D. Pitney, a psychotherapist who lived at No. 220 West 71st Street, had had enough.  He told reporters that loud music and singing, mainly "Hawaiian," blared from the Iron Gate "from 8 P.M. to 4 or 5 in the morning," making sleep impossible for him and his neighbors.  A meeting was held in the home of Mrs. Madge Stover, next door to the nightclub at No. 210, and a protest petition was started.

The Iron Gate was by now run by Arthur W. Kemp, possibly William's son or brother.  He was slapped with a summons for maintaining a public nuisance.  It was apparently death knell for the Iron Gate.  A little over a month after the neighbors revolted, No. 212 was sold to insurance broker Leo Salomon "for investment."  In reporting the sale, The Times noted "The building is now vacant."

Salomon formed the 212 West Seventy-First Street Corp. and maintained the property for about two decades.  In stark contrast to the rowdy nightlife during the Iron Gate years, the house was now occupied by at least two vocal studios.

Carl A. Yost trained classical vocalists here during the 1930s and early 40's.  Among his star students was composer and baritone Elmo Russ.  Yost regular staged recitals in his studio and Russ was perhaps his most frequent performer.  In 1939, for instance, The Musician reported, "In the highly atmospheric and appropriate setting of Carl A. Yost's Studio, Elmo Russ, vividly gifted composer-baritone, presented another of his diverting programs on June 1st, offering lyrics by Edna St. Vincent Millay."

Another voice teacher, Mario Rubini-Reichlin, had his studio here for years.  Born in Vienna, he had been professor of piano at the Vienna Conservatory of Music and a concert pianist in Austria until the Nazis came to power.  He fled to America, taking up the profession of a voice coach.  He died at the age of 70 on October 7, 1968.

By then No. 212 had been renovated to a single apartment on the ground floor and two each on the upper floors for a decade.  In 1995 it was purchased by Dr. Moshe M. Rothkopf and his wife, Ziporah.  The former basement level was converted for Dr. Rothkopf's medical practice in 1998. 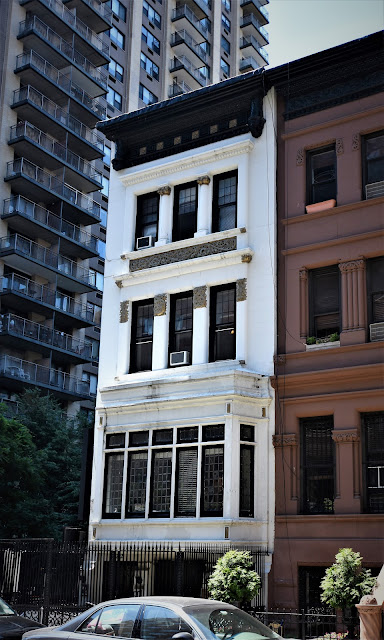 The brownstone has been painted white and Pelham's carved Romanesque elements picked out in a garish gold; possibly a legacy from the 1930s nightclub.  Nevertheless, Carl Strong's interesting 1905 bay makes No. 212 a standout on the block.  And the tall iron fence, an attempt to foil Prohibition agents, survives.

photographs by the author
Posted by Tom Miller at 12:15 AM