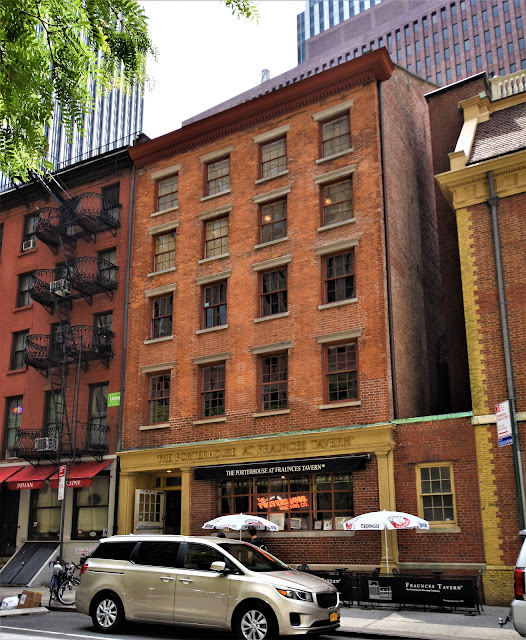 As early as 1695 a house owned by the Philipse family stood on the site of No. 58 Pearl Street.  (The street earned its name from the broken oyster shells that covered its surface.)  By 1831 the property was owned by James Thomson.  He leased it that year to David Jaques and John Hitchcock, who constructed a substantial brick building for their hardware business, David Jaques & Company.  Five stories tall, it was faced in Flemish bond red brick and trimmed in stone.

Jaques and Hitchcock quickly parted ways.  By 1836 Hitchcock had formed a partnership with his son, James, creating the produce, or "grocer," firm John Hitchcock & Son.  David Jaques went into the dry goods business and moved to Greenwich Street.

The riverfront location, convenient for receiving goods, attracted other produce firms.  By 1841 John Hitchcock & Son shared the building with Halsted & Brothers, H. B. Loomis, and C. R. Swords, all listed as grocers.  William W. Halsted and his partners soon diversified and in 1843 were listed as "importers of hardware."

In 1844 the ground floor became home to Paris R. Pomeroy's liquor, wine and cigar store.  On December 16 that year he advertised "for sale to families, hotels and others, choice old Wine, Brandies, Whiskey, Rum, &c. &c.  They will be drawn from the original casks in quantities, to suit purchasers."

Pomeroy received his stock in various containers, the names of some of which are unfamiliar today.  The ad offered "a large assortment of all kinds of Wines and Liquors, in pipes, half pipes, hogsheads, quarter casks, cases, &c. &c."   The wines or liquors were then drawn from the various casks in the amounts requested by the customers.


While the Van Bokkelen family's surname suggested New Amsterdam roots; Spencer Dew Cotten Van Bokkelen's father, Adrian, had arrived relatively recently, in 1793.  Spencer was born in 1828 and at the age of 21 opened his general commission business at No. 58 Pearl Street.

In the meantime William K. Van Bokkelen was embarking on a stellar military career.  He was a classmate of Ulysses S. Grant at West Point, graduating on July 1, 1843.  He quickly made a name for himself, participating in the Military Occupation of Texas in 1845 and seeing action in the War with Mexico.  On July 28, 1853 he was promoted to Captain and, as Assistant Quartermaster, put in charge of "the Corrals, the Forage, and the men appertaining to the Quartermaster's Department at Fort Union, New Mexico."

The captain's sterling reputation became tarnished when he faced a court martial in 1861.  Van Bokkelen was found guilty of a long list of improprieties, including allowing his men to cultivate government land for their own gain (and his), and selling military horses to soldiers then allowing them to use government feed and stabling.  The charges alleged Van Bokkelen had made $12,000 in two years--about $353,000 today.

The disgraced officer was discharged from military service in April 1861 and he returned to New York where he joined Spencer D. C. Van Bokken's firm.   Four years later he was still trying to clear his name.  He sent a letter to Grant using the Pearl Street address asking for his influence to "have the decision laid aside."

Grant was surprisingly accommodating, writing to the Secretary of War on February 17, 1865.  He pointed out "If I am not mistaken the most of the Court and witnesses in this case were persons who immediately after the trial left the service to join the rebel Army."  Unfortunately for Van Bokken, even the intervention of Ulysses S. Grant could not restore his good name.

William Van Bokkelen changed professions.  But that did not work out either.  On November 22, 1867 he filed for bankruptcy, listing his profession as "solicitor."  In 1869 Spencer D. C. Van Bokken, too, switched jobs and left Pearl Street.  In 1893 the History of the City of Brooklyn noted "He is now a public accountant and auditor and enjoys a large clientage among lawyers and corporations."

By 1871 George B. Ferris & Co. was in the building.  The produce commission firm would remain here for at least two decades.   It seems the entire family was involved in the business--George A., George B., Laning, Robert and William.

One of the company's employees, Peter Hechman, found himself in deep trouble in the spring of 1883.  The young clerk met Katie Yunker at a concert at Steinway Hall in April 1880.  The New-York Tribune explained "He afterward sought her company with great assiduity.  He besought her in earnest terms to meet him at various places."

The newspaper said he used "all the powers of his charming personality to bear upon her" and the two would take evening walks up Broadway or Fifth Avenue.  Hechman wrote love letters, gave her a ring and a necklace engraved with his name, and then proposed marriage.   They even set a date for the event.

But after going to the evening services at the Church of the Most Holy Redeemer on December Sunday in 1881, Hechman's passions got the best of him.  The Tribune wrote "he took advantage of his power over her to betray her."

Although the Victorian press was careful not to bluntly say that the 21-year old Katie had become pregnant, it reported "When he learned of her condition he ceased altogether his attentions to her."

When Hechman was asked if "he had ever been improperly intimate with Miss Yunker," he cried "No!"   Katie immediately "fainted dead away in the arms of her mother and sister and female friends, who had come to the trial to sustain her."  The Tribune wrote "When it was fully ascertained that Miss Yunker was unconscious and really needed assistance, the women one and all wept and wailed and wrung their hands and produced altogether a thrilling scene."

Hechman had an uphill battle in defending himself to a Victorian courtroom amid the women's melodramatics.  The young man who earned $10 a week (about $245 today) was ordered to pay Katie Yunker $10,000.

Sharing the building with George B. Ferris & Co. by 1887 was the Laning File Co.  The company's "letter and bill" files had little to do with the files familiar to 21st century office workers.  Wooden boards of different sizes were equipped with spring-held clamps for organizing bills, receipts, letters, and such.

A massive fire in No. 60 Pearl Street near door threatened No. 58 on September 11, 1893.  The blaze broke out on the top floor, occupied by Minetta & Co., varnish dealers.   The three-alarm fire was intensified by exploding barrels of oil.

At the time Platt, Washburn & Co., wholesale liquor dealers occupied the ground floor of No. 58.  William Tyler, also a liquor dealer, took up the second floor, while Park, Hiltorf & Co. had the remaining three floors.    The three firms suffered combined damages of about $5,000.

Platt, Washburn & Co. and Park, Hiltorf & Co. were still in the building past the turn of the century when the Daughters of the Revolution pushed for the preservation and restoration of Fraunces Tavern, next door.   In 1897 they had petitioned Mayor Abram Hewitt asking that the entire block on which the tavern stood be purchased with public money, that the building be moved to the opposite corner of the block and restored, that the rest of the block be planted as a park.

In 1903 the Woman's Auxiliary to the American Scenic and Historic Preservation Society seemed to have convinced city authorities to purchase "the tavern and half of the block upon which it stands."   The "half-block" included No. 58 Pearl Street.

But a year later the Board of Estimate and Apportionment was less enthusiastic.  The proposed Patriot's Park, created by demolishing the structures surrounding Fraunces Tavern, would cost $2 million--nearly $55 million today.  The New York Times reported on  February 7, 1904 "the board only contemplates the securing of the tavern building itself, or at most a narrow strip around it."   Letters pro and con flooded newspaper offices.  Eventually the idea of the park was scrapped and the restoration of Fraunces Tavern moved forward; the completed project dedicated in 1907.

In the meantime, business went on in No. 58 Pearl Street.  In 1906 Samuel J. Park occupied the upper floors while liquor importer Frederick William Guy operated from street level.  The building was still owned by the Thomson family, which had first leased the property to David Jaques and John Hitchcock in 1831.

In 1919 Anne D. Thomson, who was living in Paris, leased it to Araham Lapedes.  He hired architect Charles H. Richter to design a new storefront at the cost of $800.   Lapedes leased portions of the building to subtenants, including McIntosh, Terrio & Co. which took the second floor in September 1919, and Max Becker who paid $5,000 a year for the store space in 1920.

The Sons of the Revolution had taken over the Fraunces Tavern project from Daughters of the American Revolution by now and had already begun accumulating buildings on the block to prevent incongruous development.  In 1920 the group announced its intentions "to undertake the preservation of the place."

On October 27, 1945 The Times reported that "The Sons of the Revolution...who own and operate Fraunces' Tavern...have expanded their holdings by purchasing the adjoining five-story loft building at 58 Pearl Street."  The article pointed out "The purchase gives the buyers an 'L' around the tavern" and announced they were "planning alterations in the building to harmonize it with their other holdings surrounding the tavern."

In 1957 renovations were completed that resulted in a two-story restaurant with the upper floors "permanently vacant," according to Department of Buildings documents.  Then in 1977 the third and fourth floors were converted to museum space. 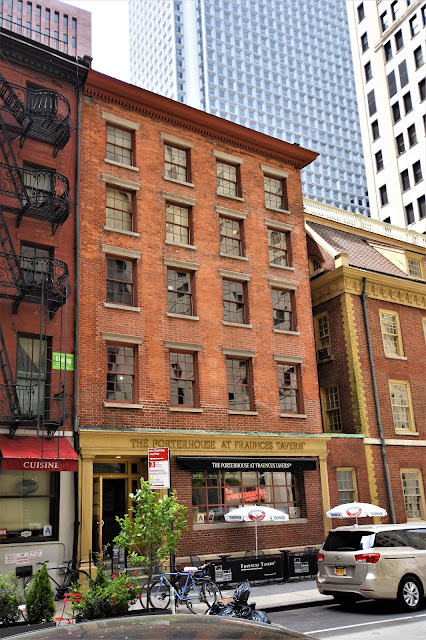 Operated today as part of the Fraunces Tavern complex, No. 58 has received restoration based on careful architectural forensics; its striking presence overshadowed by its esteemed next door neighbor.