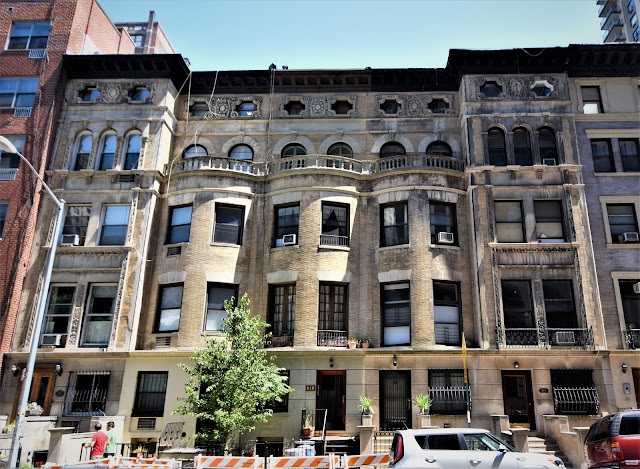 Clarence True is remembered as one of the foremost architects of the Upper West Side's formative years.  His free-handed takes on historical architectural styles were sometimes capricious, other times formal, but always successful.  And despite designing scores of residences and commercial buildings, he seemed never to repeat a design.  Except perhaps once.

In 1894 developer Harry Chaffee commissioned True to design two sets of rowhouses--one along West End Avenue and the other around the corner on West 70th Street, between West End and Amsterdam Avenues.   Perhaps to save Chaffee money, the two projects were identical.

Clad mostly in buff-colored iron-spot brick, the houses sat upon a rusticated stone base where "low stoops" (a compromise between the "high stooped" design and the American basement plans with shallow porches) led to the single-doored entrances.

True designed the five narrow homes (each just 15 feet wide) to appear as a unified structure.  The end homes rose straight up from the property line while the middle three added interest with two-story bowed fronts above the first floor.  The interior space the center houses gave up in the fourth floor set-back was gained in ample balconies.  The attic floors featured cruciform openings framed in ornate terra cotta.  Each pair was joined by an elaborate cartouche, consummating the Italian palazzo motif.

The 70th Street row stretched from No. 215 to 223.  The attractive homes were sold even before construction was completed early in 1895.  As intended, they became home to well-to-do professionals.

In 1894 Chaffee sold No. 215 to George Cornell Freeborn for $26,000--nearly $740,000 today.  A graduate of Columbia University's Medical School, Freeborn was now a teacher of Normal Histology in its College of Physicians and Surgeons.  He was known both in America and Europe for his writings on pathology.

A Manhattan native, he was born in 1849 and married to the former Eliza Duryee Dean.  The couple had no children and the erudite doctor seems to have been more interested in scholarly than social pursuits.  His only club was the Century Association, which limited its membership to artists, literary men, scientists and doctors, and the like.

Nevertheless, the drawing room of the Freeborn house was the scene of feminine chatter in 1902.  George's sister lived in Hempstead, Long Island.  When it came time to introduce her daughter to society, she borrowed the 70th Street house to do so.

For four weeks the doctor's home was invaded by the female species.  The New York Times reported on December 12, "Mrs. Charles Meyers of Hempstead is giving four Mondays in December at the home of her brother, Dr. George Cornell Freeborn...to introduce her daughter, Miss Jeannette Meyers.  The Misses Isabella Wetherill, Kate Richardson, Adelaide, Baylis Marie Russell, Margaret Lloyd, Miriam Blagden, Elizabeth Masten, Josephine Russell, and Mrs. George Cornell Freeborn are among those who will assist the debutante and Mrs. Meyers in receiving."

Freeborn sold the house in November 1905 to Mortimer Smith.  It saw a succession of leasers and owners before becoming home to another physician in the Depression years.

Dr. Edward A. Rosenberg was well established on the Upper West Side.  As early as 1915 he was Physician in Charge at the Riverside Clinic.  In the fall of 1935 he turned his attention to a neighborhood nuisance.

Almost directly behind his house, at No. 212 West 71st Street, was The Iron Gate, a restaurant and bar.  According to The New York Times it was "said to have been a favorite resort of former Mayor James J. Walker."  In October Rosenberg and another neighborhood doctor, Maurice D. Pitney, went to police headquarters to file a complaint.  According to Pitney, "loud music and singing, notable 'Hawaiian,' emanating from the restaurant from 8 p.m. to 4 and 5 in the morning had made sleep impossible and had stirred him and other neighbors to protest."

Their protests apparently worked.  Pitney reported that the following Tuesday night there "was not a bit of noise."  Both doctors could sleep again.

No. 219 was also the home of physicians.  First purchased by Louise Livingston in 1894, it was purchased by Dr. Albert S. Morrow and his wife, Marjorie, in March 1912.  A surgeon and the author of many books on medical subjects, he was following in his father's well respected footsteps.

Dr. Prince A. Morrow was one of the foremost authorities on leprosy and skin diseases in general.  In 1888 he had spent the winter in Hawaii at the leper colony at Molokai.  He was also an expert on an even less socially discussed problem--sexually-transmitted diseases.  His 1904 book Social Diseases and Marriage drew attention in the medical community.

The Morrows leased No. 219 in October 1918, then sold it the following year.  In 1926 Dr. William Colin and his wife, Elizabeth, purchased the house.  The couple had two grown children.


Colin, who was graduated from New York University's Medical School in 1898, specialized in the use of x-rays and in electrotherapeutics.  Both areas were still relatively in their pioneering stage.  He had been for years the roentgenologist (today's radiologist) on Welfare Island and was director of x-ray work at Harlem Hospital.

The house next door at No. 221 was purchased in September 1894 by Philemon Tecumseh Sherman.  The son of the famous Civil War general, William Tecumseh Sherman, he held degrees from St. Louis University, Yale University and Columbia Law School.

A life-long bachelor, P. Tecumseh Sherman was appointed State Labor Commissioner at the turn of the century.  It was greatly through his passionate efforts that the state child labor laws were improved and enforced.  He complained in January 1906 that five years earlier his department had 50 inspectors.  Now, he said, the number was "deliberately reduced, while their work has since been multiplied."

The editors of The Evening World were incensed, writing "It would be well to increase the number to more than fifty.  It would be well to amend the law, as Mr. Sherman suggests, applying to night work and to the hours of children."

It was most likely Sherman's post in Albany that prompted him to sell No. 221 in 1906.   By the Depression years, it was being operated as a rooming house.  Not all of the tenants were upstanding.

Among them was an actor, 38-year old Ray Ripley.  Ripley had received a suspended sentence a year earlier for petty larceny.  He attended a party in 1930 at the home of retired stock broker George W. Thompson and his new bride, Frances a former actress who had used the stage name Frances Stevens.  The couple had been married on May 6.

On October 8 Frances received a letter signed "Blackmere."  It warned her that he had information "concerning her past" which could be sold to magazines and newspapers for $1,500.  For $2,000 she could prevent the scandalous exposure.

Frances went to the police.  After back-and-forth letters, personal ads, and phone calls (which detectives listened in on); it was determined that the scandal was an unchaperoned trip she had taken on the schooner Sea Wolf with an older sea captain.


Finally Frances went to an arranged spot, accompanied by undercover detectives, with an envelope containing currency-sized papers bound with a $50 bill on top.  When she handed off the "hush money" to 28-year old contractor Howard Larken, the officers rushed in to arrest him.

Larken quickly fingered Ripley.  He claimed the actor had paid him to pick up the envelope without divulging its contents.  A few hours later detectives arrived at No. 221 to arrest Ripley.

While The New York Times reported that he appeared smug and "suave and well dressed," his demeanor no doubt changed when he appeared in court.  To his surprise and astonishment, Frances Thompson admitted she had been on the Sea Wolf; but there was nothing inappropriate going on.  The captain, Frank Preston, was her father.

Another roomer, 18-year old John A. Rosario, was arrested in August 1948 on the unlikely charge of horse theft.  Rosario had at one point worked as a groom.   A few weeks before his arrest he first saw the 9-year old Arabian stallion named Silver at the Manhattan Riding Academy on West 67th Street.  The horse, valued at $2,500, had once belonged to fighter Joe Louis.

Without being noticed, Rosario took the horse out for "a brief canter" and returned him.  But his obsession got the best of him and on Thursday night, August 19, he sneaked back, put a Western saddle on Silver, and rode off.

The New York Times later explained "The youth said he rode to New Jersey across the George Washington Bridge, where he had some difficulty persuading the toll takers to pass him for a 25-cent fee.  He then got to Tenafly, where Silver lost a shoe.  After spending the night there, Rosario continued on the highways through Northern New Jersey, unmolested by the police despite the fact that an eight-state alarm had been sent out for him."

Several days later a "sharp-eyed state trooper" noticed Silver grazing near Southfields, New York.  Rosario was arrested, Silver was returned, and the teen had to explain himself to a judge.  His defense was simple.  "I just fell in love with that animal." 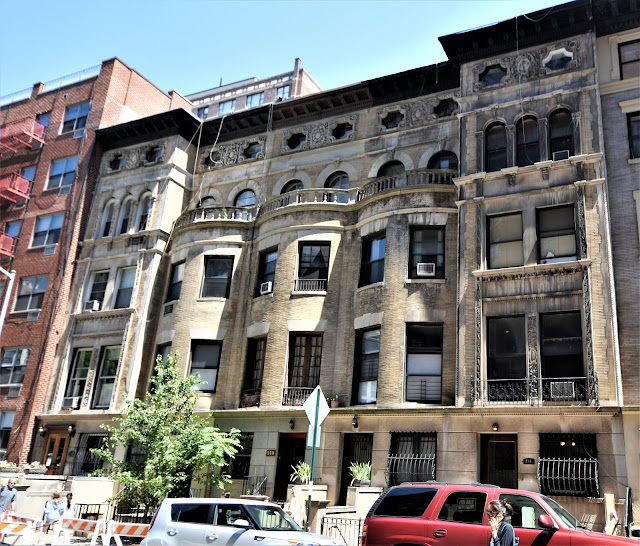 No. 223 had its share of shady publicity as well.  At the turn of the century it was home to Captain George W. McClusky of the Police Department.  When he became ill in August 1902 "with malaria," he blamed the "odors and dampness from the rapid transit tunnel" for causing the disease.

Five years later he had risen to the rank of Inspector.  In 1907 the New-York Daily Tribune began investigating corruption within the police force.  On Sunday, March 10 it ran the headline "Policemen Who Become Rich On Modest Salaries," and pointed out McClusky's comfortable living conditions (while getting some minor details wrong).

"Take the homes of Police Inspector George W. McClusky and Battalion Chief Edward J. Worth, for example.  Although Mr. McClusky receives from the city only 54 cents a day more than Mr. Worth, he is able to live as if he had a salary which was $54 a day greater."

The newspaper described No. 223 as "five stories high, faced with white stone, with a marble entrance embowered with potted palms and evergreens.  It is of the latest American basement type, and its appointments are of the most expensive kind.  The curtains which hang in the windows are of costly lace.  The floors are covered with fine rugs.  The house is furnished sumptuously.  Neighbors say that on some nights there is a constant string of automobiles rolling up to No. 223, and that their occupants who alight and to whom the McClusky footman opens the heavy plate glass front door are richly dressed as for some social entertainment.  Mr. McClusky does all this on a salary of $3,500 a year."

McClusky had been on the force since the 1880s and his career was never smooth.  He had been promoted and demoted several times.  Never married, he shared the 70th Street house with his three unmarried sisters.  The Times noted "The nickname of 'Chesty,' and an earlier one of 'Gentleman George,' were applied to McClusky, not only because he was big and handsome, but because he was a careful dresser, cultivated an aristocratic bearing, made a point of attending social functions, and did much of his most important detective work in evening clothes."


The inspector retired on September 19, 1912 when, according to The Times, "he believed that he was suffering from ptomaine poisoning as a result of eating shellfish at a shore dinner."  That was not the case, however.  A blood test not long afterward showed he had a rare form of anemia, what Dr. Charels E. Nammack called "progressive pernicious anaemia."  The doctor gave a dire prognosis, saying "of the 1,200 cases known to the medical profession, only six recoveries are recorded."


No. 223 was renovated to apartments in 1930 and by the second half of the century all of the row would be altered.  Although dingy and abused today, the five houses nevertheless essentially retain Clarence True's 1893 dignified Renaissance design.