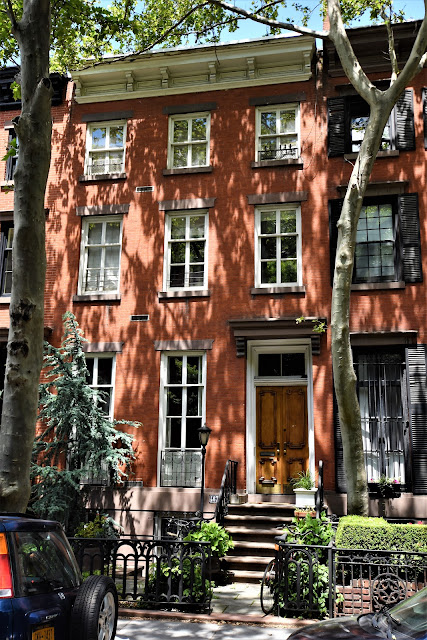 In 1853 a handsome row of Italianate-style homes was constructed on West 21st Street.  Although seemingly a speculative project, the residences (beginning with No. 473 at the northeast corner of Tenth Avenue and stretching eastward to No. 465) appear all to have been pre-sold.

The distinguished brick-faced houses were three stories tall above a brownstone English basement.  The full-length parlor windows and bracketed cornices were hallmarks of the architectural style.  The stone stoops rose to handsomely-paneled double doors under generous transoms below stone cornices.

No. 467 was built for William Williams, listed in directories as dealing in "laces."  How long the Williams family remained here is unclear.  By the mid-1870s it was home to John F. McLaughlin, a member of the Eighteenth Street Methodist Episcopal Church several blocks away.


The 1880s saw a far different owner in Michael Regan, a liquor dealer.  While financially well-to-do, Regan appears to have been decidedly more proletariat than his predecessors.

In the first months of 1887 workers in the New Jersey coal yards went on strike.  To help make their point, some "coal handlers" dumped coal into the harbor.  When Master Workman Quinn was arrested, a group of Irish businessmen came to his rescue.  Michael Regan joined Patrick McGarland and shoe merchant Dudley Kelly in furnishing the $5,000 bail.

As early as 1875 the Sulphur and Mercurial Vapor Baths were located at Irving Place and 17th Street.   Unlike the popular Russian and Turkish steam baths, the facility needed few, if any, special outfitting.   The use of mercury--both directly applied to the skin or inhaled as vapor--was considered a cure for syphillis.

In his 1869 Syphilis and Local Contagious Disorders, Berkeley Hill explained "The skin readily absorbs mercury when it is rubbed in in the form of ointment, or deposited as a thin coating of condensed mercurial vapor over the surface of the body.,.In the mercurial vapor bath an atmosphere of steam and mercuric vapor is produced, which deposits on the skin a thing coating of mercury while it is violently perspiring."

In June 1900 the Sulphur and Mercurial Vapor Baths moved into No. 467 West 21st Street.  Desperate patients would visit the facility for years hoping for a cure which, tragically, would never come.


While many other private homes in the Chelsea neighborhood were converted to apartments or boarding houses during the Depression years, No. 467 escaped that fate.  In the late 1930s into the 1940s it was home to Russian transplants Wasily and Julia Romanovsky.  The couple had one roomer, 36-year old Mary Hauptman.


Later, following her divorce, Marian Boyd Beresford moved into the house.  Educated at the exclusive Miss Gill's School in Bernardsville, New Jersey, she moved in elevated social circles.  Her engagement was announced in 1958; and she was still living here on July 8, 1959 when she was married to Anthony C. Webster in the John Street Methodist Church.

But in was in 1966 that No. 467 got its most celebrated owner.  Anthony Perkins was well-established as both a stage and motion picture actor by 1966 (and had even released three pop music albums as a singer).  His 1960 role in Psycho would remain his most memorable.

Perhaps in an effort to hide his homosexuality, Perkins lived with photographer Helen Merrill on 55th Street.  When the block was slated for demolition, Helen searched for a new home.  She chose No. 467 West 21st Street.

Perkins told Earl Wilson in 1968 that he fell in love with Chelsea.  "It's more informal than the Village.  You wear whatever comes to hand when you open the closet."

When Bernard Carragher interviewed Perkins in the house in November 1972 for The New York Times, he provided a peek into the actor's living environment.  "He is sitting on a brightly covered window couch in a sun-splashed corner of his Chelsea living room, surrounded by hanging spider plants, potted begonias, and fresh chrysanthemums, and at his feet on a hooked rug is Murray, his half collie-half-German shepherd dog.

Perkins met photographer and actress Berinthia "Berry" Berenson (sister of actress Marisa Berenson) at a party given by Ruth Ford that fall.  Desperate to squash any hints of the actor's sexual preferences, Perkins's studio increasingly pressured him to marry.  Three months after they met, Berry moved into the 21st Street house, supplanting Merrill and Dale.

In April 1973 Berry was interviewed in the house by New York Times journalist Judy Klemesrud.  In retrospect, one has to wonder how much of her description of her relationship with Perkins was scripted.  "I've had a big crush on Tony since I was a little girl," she said.  "I had a scrapbook of him when I was 12.  Once, when he came to live in Paris, Marisa and I went through all the telephone books trying to find his number.

"This is more fabulous than anything I've ever known.  I've never lived with anyone before.  But I don't think we'll get married, not for a while.  I think living together is just as much fun."

The couple was married on August 9 that year.  Perkins was 41, his bride was 25.   The wedding that Berenson was so doubtful about may have been hurried along because six months later a son, on February 2, 1974, son Oz was born.  The couple would have one other son, Elvis, two years later.


The family left West 21st Street a few years later.  Oz would become an actor-musician and Elvis a recording artist.  Tragically, Perkins died of AIDS-related pneumonia in 1992; and Berry was killed in the September 11 World Trade Center attack as a passenger on American Airlines Flight 11. 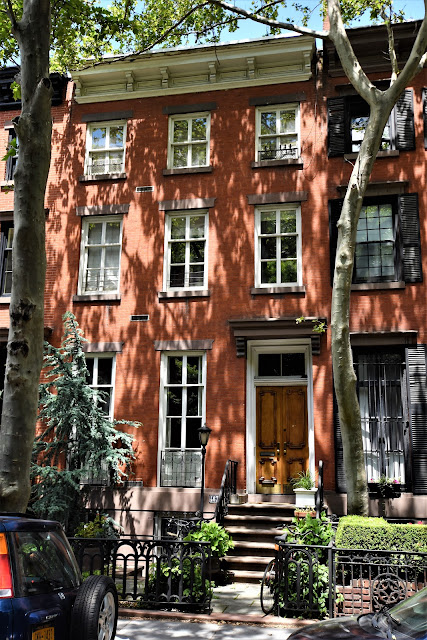 No. 467 remains a single-family home.  It retains its sedate mid-Victorian appearance; successfully disguising the often colorful history that played out inside.