During the Civil War construction in New York City came to a near halt.  But with the return of the work force, new projects soon got underway.  One of these was Jacob Pecare's store and loft building which replaced two 1810 houses at Nos. 39-41 West Broadway, between Duane and Thomas Streets, in 1867.

Pecare was educated as an attorney, ran an importing business, and invested widely in real estate.   He hired Alfred A. Dunham to design his  five-story structure, to be called the Commercial Building.   The architect turned to a commercial take on the Italianate style.  The cast iron storefront featuring fluted Corinthian columns upheld four stories of "Ohio Freestone."

Early in 1868 John W. Kennion, writing in The Architects' and Builders' Guide, reported the nearly-completed building.  He described the upper floors as being "of an original elaborate design, having large openings for windows, very essential in a building of this description."  The Corinthian-style cast iron columns of the store front were carried on throughout the cavernous interiors to support the floors above.  Kennion remarked that the Commercial Building was "considered as a first-class building, and a good investment."

Dunham's handsome upper facade was framed by neat quoins that ran the height of the building.  A busy cast cornice completed the design.  But it was his treatment of the openings which no doubt prompted Kennion's "original elaborate design" comment.  The molded window surrounds of floors two through four were uniquely decorated--incised floral designs at the second, blind rondels at the third, and interesting pedestal-like cornices on the fourth.  Even the more traditional, fully-arched Italianate openings of the top floor boasted unusual carved enframements that sat on attractive brackets. 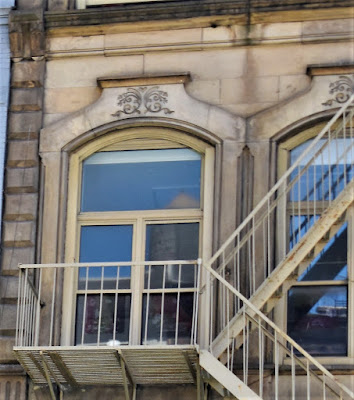 The structure cost Pecare $32,000.  And so when he sold it to Richard Mayer in September 1868 for $60,000 (just over $1 million today), he indeed proved the prediction of a "good investment" correctly.  Mayer seems to have included his brother, Bernhard, in the purchase; but like Pecare their interest was purely an investment.

Among Mayer's first tenants was Farnham & Co., dealers in men's underwear--a product that would not seem a tempting target for burglars.  Nevertheless, on Christmas Eve, 1869, Thomas B. Baker (who coincidentally was a baker) was arrested as he was about to enter his home at No. 46 Thomas Street about a block away.  The New York Herald reported "He had at the time in his possession nine dozen of men's drawers, valued at fifty-four dollars, the property of Farnham & Co., Nos. 39 and 41 West Broadway, which he had stolen."

The haul would be worth about $970 in today's dollars.  The underwear thief was held at $1,000 bail to answer the charge of burglary and theft.

The considerable commercial development of the area required improved infrastructure.  In 1870 the city installed a 12-inch cast iron water main down the center of West Broadway to handle the demands of the many new loft buildings.

By the time J. E. Levy & Co. moved into the second floor around 1873, the name "Commercial Building" had fallen away and only the address was being used.   Garment manufacturer, J. E. Levy & Co. was looking for "a second-hand friction glaze calendar; also a set of Drying Cans and Copper Roller" on April 6 that year.   The equipment was used in adding luster and smoothness to the surface of fabrics.  Two weeks later the firm placed another advertisement, seeking "A lady cutter on aprons."

Winn & Weaver, wool merchants, moved from No. 61 Barclay Street about this time.  Charles G. Weaver was not only wealthy, but busy.  He was also the president of the National Bank of America of New Jersey.  Winn & Weaver would call the building home for decades.

Also operating from No. 39-41 West Broadway was Charles C. Carpenter.  His company, C. C. Carpenter, manufactured bustles, a must-have accessory worn under female fashions.  Most 19th century garment factories required workers to supply their own thread and needles.  Carpenter went a step beyond.  His advertisement in The New York Herald on February 27, 1876 noted "Operators on Muslin Bustles Wanted--With their own machines."

In 1881 the Clasp Envelope Co. moved in to the building.  The firm did apparently well, for it was repeatedly looking for workers.  In 1883 it wanted a "Boy, living in Ninth ward, as errand boy and to make himself generally useful."  The following year in March it advertised for "Experienced envelop folders wanted; also claspers; work given out."  The mention of "work given out" referred to the practice of what was also called "home work," so women with children, for instance, could do the piece work off site.

The extent of Winn & Weaver's business was evident in November 1880 when Edward Haigh, proprietor of the Valley Woollen Mills in Newburg, New York, filed for bankruptcy.  The Carpet Trade Review noted "Mr. Haigh was known to have considerable business relations with Winn & Weaver, of West Broadway."  In fact, the article reported "it is rumored" that he owed the firm $10,000, or about a quarter of a million today.

Joining the eclectic mix of tenants in 1890 was the Gum Elastic Roofing Co.  Dealers in roofing felt, the company advertised nation-wide for years.

West Broadway had been a source of confusion to New Yorkers for decades.  Originally Chapel Street, in the 1840s it was unofficially being referred to as West Broadway (there was an East Broadway, too).  Finally in the 1850s the city relented and renamed it--except for College Place.  The three block stretch between Barclay and Warren Streets was named College Place in 1830 and was not affected by the West Broadway change.

But in the spring of 1895 the city proposed a project of widening College Place, while connecting West Broadway to South Fifth Avenue.  The improvement would create one continuous thoroughfare from Dey Street to Washington Square.  And businessmen, including those in No. 39-41 West Broadway saw a problem.

A petition was sent to the mayor on March 18 suggesting "the entire street should be given the name of West Broadway for its entire length."  The city fathers agreed and in 1897, with the project completed, Nos. 39-41 received its new address of 137-139.

Charles G. Weaver died at the age of 74 on December 19, 1896.  While Winn & Weaver continued for a few years; his death was almost a symbol of the changing complexion of West Broadway.  By 1903 the old firms like Clasp Envelope were gone, replaced by an Adams Express branch on the first floor and mostly shoe firms above.

The Tribeca neighborhood in general had been the center of the shoe industry for decades; but by the end of World War I it engulfed Nos. 137-139 West Broadway.   The Wallace Rubber & Shoe Co., wholesale jobbers, were here as was shoe wholesaler P. A. Sawyer & Co.

John J. McGrath had been a major shoe manufacturer, based in Salem, Massachusetts, since the first years of the century.  In April 1922 he and C. S. McGrath partnered with Rudolph M. Klein to form the McGrath Shoe Company.  The new corporation was headquartered in the West Broadway building.   McGrath Shoe Company produced high-quality footwear.  Their "British type" mens' shoe called the Charing Cross sold for $12.75 in 1938, over $200 today.

Rudolph Klein left work as usual on Wednesday evening, April 14, 1937.  While driving through the business section of the village of Smithtown, Long Island, the 53-year old suffered a heart attack.  His out-of-control automobile smashed into a parked car.  Klein apparently died before the impact.

The second half of the 20th century saw Tribeca factories replaced with residential lofts, restaurants and galleries.   The dance studio of Batya Zamir was in No. 137-139 West Broadway by the mid-1970s.  Zamir had appeared with the Alwin Nikolais and the Murray Louis Companies in the 1960s.  Her avant-garde approach was epitomized in her "Rebound" solo presentation here in March 1976.

New York Times critic Anna Kissellgoff called it "a work replete with virtuosity and athleticism and one that suggested that Miss Zamir is on the path to opening up a new genre of movement possibilities."  That "new genre" had to do with Zamir's "dancing" in the air.

Richard Van Buren had designed "rubberized tightropes" which were attached to pillars and one wall.  Dressed in a leotard and silver pants, Zamir also utilized trapeze-type rubber loops.  Kissellgoff described "Throwing herself against the rubber ropes, she was propelled in various directions with a speed that would have been impossible on her own."

"Rebound," of course, was just one of the ongoing presentations Zamir staged here before all tenants lost their leases around 2008 for renovation to residential space.  What may have been upheaval for the displaced occupants turned serendipitous in the early hours of Friday, August 7, 2009.

After 139 years, the cast iron water main laid in 1870 finally erupted.  By 5 a.m. the water had risen to four feet deep in some buildings.  West Broadway collapsed and buckled in two places and several buildings had to be evacuated.  Among the flooded structures was No. 137-139 West Broadway. 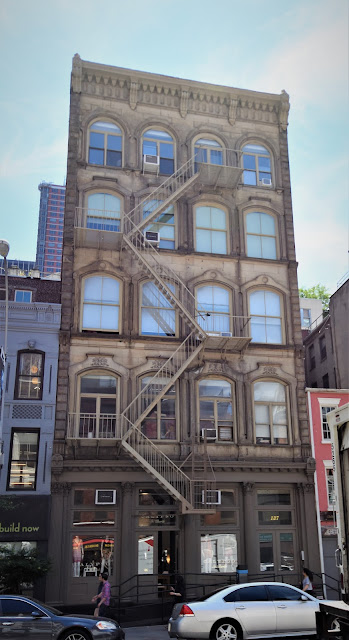 Renovation, of course, went on, falling short of cleaning the facade or improving the internal design to make removal of the distracting fire escape possible.   Nevertheless, Dunham's handsome post-Civil War structure is remarkably intact.  Even the cast iron storefront is nearly perfect, down to the Victorian double doors.