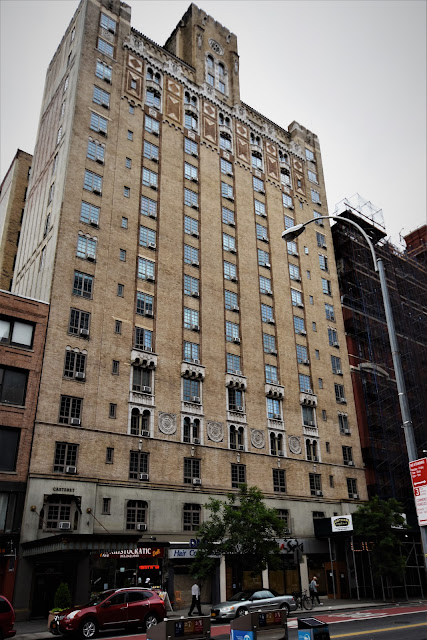 In 1833 the Chelsea neighborhood was just forming into a new residential district.  That fall the New York Presbytery agreed to establish a mission church on Eighth Avenue to serve the few Presbyterian families who were "endeavoring by occasional prayer meetings to keep the Christian flame glowing in their hearts."

In 1889 the church merged with the Westminster Presbyterian Church, located on West 22nd Street since 1856.   The combined congregations became the Westminster Church of West 23rd Street.  But trouble was on the horizon.

Under the modern-thinking pastor Rev. Thomas Harvey Whelpley, Chelsea Presbyterian struck out on a startling project--a "skyscraper church."  In 1926 the venerable church building was demolished to make way for a modern residential and transient hotel that would include a church auditorium and related facilities.

Church officials marketed the idea as a sign of things to come.  Rev. Theodore F. Savage remarked "We are doing that which is going to be done from here to the Pacific Coast."  But not everyone liked the jazz-age concept.    The New York Times editorialized, "Must we visualize a New York in which no spire points heavenward?"

Emery Roth, known for his Art Deco apartment buildings and hotels, was given the commission to design The Carteret Hotel.  (Confusingly, the name was said to honor the last surviving signer of the Declaration of Independence.  That, however, was Charles Carroll, and the only prominent Carterets in the New York area during the Revolution were ardent Royalists.)  Roth produced an 18-story Art Deco take on a Tuscan villa.

A two-story limestone base provided hotel access, under a handsome metal and glass marquee, at No. 208; and the entrance to the two-story church at No. 212.  The beige brick facade above was ornamented with faux balconies, giant Moorish-style roundels at the fourth floor, and a tapestry of colorful brickwork at the 15th and 16th floors.  The Mediterranean motif was carried on in the tower that disguised the rooftop water tank. 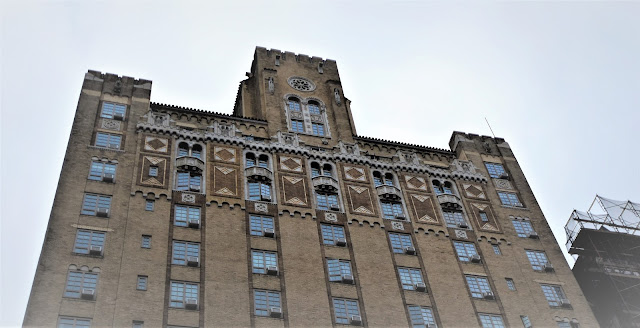 By September 1927, when the hotel was poised to open, The New York Times appears to have accepted the skyscraper church-hotel concept.  Calling the Carteret Hotel "One of the important improvements in the old Chelsea district," it noted "It contains apartments of one, two and three rooms for transient and permanent guests."   When the hotel opened a few weeks later, fifty percent of the apartments had been leased.  The ground floor included a restaurant operated by the hotel.

Rev. Whelpley (who, incidentally, had been a lieutenant in the Canadian Army during World War I) continued to exhibit his modern thinking.   Around the time the building was completed, he applied for a hack's license.  His intention was not to add to the church's coffers with his cab profits, but to "view city life from a taxi driver's seat in all angles."


On June 12, 1928 The New York Times reported "To get an intelligent insight into life in New York the Rev. Thomas H. Whelpley, pastor of the first of the skyscraper churches in New York...is driving a taxicab...On Sunday, in clerical garb, he preached to a large congregation at his church...Yesterday afternoon, in chauffeur's attire, with his photo on his hack license, he left the Hotel Carteret at 208 West Twenty-third Street, where he resides, and as plain Tom Whelpley drove off in his cab to see a cross-section of life in a big city."

Rev. Whelpley explained to the reporter that he thought "it only fair that his sermons to large New York audiences should be founded upon facts of New York life rather than upon second-hand reports."   But one cabbie felt the pastor was wasting his time picking up fares in Chelsea.  He commented to the journalist "He will only see life along Broadway, among the white lights.  No life down this way."

The Hotel Carteret's location next door to the famous Chelsea Hotel may have been responsible for its attracting a few notable literary residents.  Among the first was British novelist, poet, critic and editor Ford Madox Ford who lived here in 1928 and '29.

On January 22, 1929, during what Captain George Fried described as "gales with a very high, rough sea, accompanied by heavy snow and hail squalls," the luxury ocean liner USS America received an S.O.S. from the Italian steamship Florida.   Battling the major storm and tracking the distressed ship by radio signals, the America pulled alongside the listing Florida several hours later.

Using ladders, ropes, cargo nets and jerry-rigging two breeches buoys (essentially zip lines), the America crew managed to rescue the 32 Italian sailors.  Captain Fried was hailed nationally as a hero.  Astonishingly, he had pulled off an almost identical rescue on January 20, 1926 when his ocean liner, the SS Roosevelt, rescued the crew of the sinking British cargo ship Antinoe during a heavy gale.

The SS America steamed on to New York and the least-injured of the Florida's crew were brought to the Hotel Carteret.  On January 28 The Times reported "Twenty-seven battered members of the Florida's crew spent yesterday offering thanksgiving for their rescue and resting quietly at the Hotel Carteret...They will be the guests of the hotel until next Friday, when they will sail for Italy as passengers on the Roma.

"The crew, while in a thankful mood, showed little elation yesterday.  Penniless and without overcoats, they huddled together in the lobby of the hotel, talking little and showing only slight interest for the strange city into which they had been projected.  Most of them had never been in New York before."

Despite what the newspaper called their "slight interest" in the city, the men were treated as VIPs.  They were the guests of the Roxy Theatre's manager one evening; and hotel residents took them on drives in their automobiles.

Another foreigner to visit the Roxy Theatre was Ephraim Rosenberg, who was staying at the Hotel Carteret while studying engineering in the spring of 1930.   A native of Berlin, he went to the Roxy on April 9.  When he returned to the Carteret, he realized he had lost his pocketbook containing his passport and $947 in cash.   A tempting windfall during the Great Depression, it would amount to about $13,400 today.

Luckily for Rosenberg, J. V. Pisapia, captain of the orchestra section ushers, discovered the pocketbook.  When Rosenberg arrived the next day accompanied by an interpreter, he received everything.   Delighted, he offered a reward, but it was declined.

Another group of foreigners living at the Hotel Carteret at the time were Soviet workers.  One was 28-year old Arkady I. Pogojeff, an agent of the Amtorg Trading Corporation.  Among other Amtorg employees in the hotel, according to Pogojeff, were agents of Cheka, the Soviet secret police.

Pogojeff was a civil engineer and a graduate of the Moscow Technical Institute.  His expertise could have created a comfortable lifestyle in the United States.  But he received orders from Moscow to sail for Russia no later than Saturday, March 28, 1931.

Pogojeff disobeyed the orders.  Basil W. Delgass, the former vice president of Amtorg Trading Corporation confided "He refused to return because he was afraid he would be killed."  But refusing a Government order could have its ramifications, as well.  Pogojeff told a friend he was afraid he would "meet death at the hands of the Cheka."

Five days after Pogojeff's deadline for leaving New York, his body landed on the sidewalk in front of the Hotel Carteret.   Gregory R. Bernardsky, one of the leading anti-Communists in New York and former publisher of The American Observer, told police this was no suicide.  "If he was afraid of death in Russia, why should he seek his own death in the United States?'

The Soviets called the alleged murder "ridiculous and preposterous."  The official explanation was that Pogojeff had complained of poor health and was advised to take a vacation.  Instead, the dejected man jumped to his death.   The official police report concluded suicide.

A hold-up in the hotel on May 9, 1932 resulted in a bizarre incident.  Morris Ferguson and William Smith bound and gagged several people in the hotel before robbing guest Ralph Kahn of $40.  They were soon apprehended.  But when the 31-year old Ferguson appeared in Jefferson Market Court on June 3, he attempted suicide by snatching the bottle ink from the stenographer's desk and drinking it.

The Times reported "Detective Thomas Tunney, brother of [boxer] Gene Tunney, knocked the ink-well out of Fergunson's hand, a keeper administered milk and eggs and a doctor used a stomach pump to remove the fluid, but the patient remained unconscious."  Ferguson was taken to Bellevue Hospital.

He was back in court on July 8; but this time arrived in a strait jacket and tied to a stretcher.  Judge Morris Koenig simply remarked "Such are the technicalities of the law.  It is necessary to bring an insane man before the court in this manner to deal with him."  Ferguson's lawyer opted not to enter a formal plea, but to substitute an insanity defense. 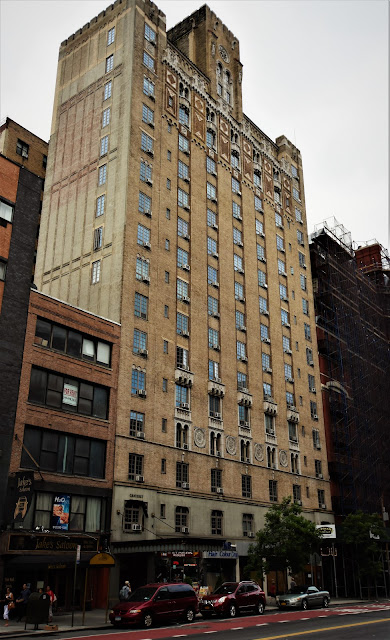 In the meantime, the Chelsea Church's ground-breaking venture was a failure.   The New York Presbytery pumped money into the congregation to the detriment of its other work.   At a meeting on January 9. 1933 Rev. Dr. Henry Sloane Coffin announced "In order to protect the Chelsea Church, which is in the Hotel Carteret...it has been necessary to pledge the resources of the committee to such an extend that there is absolutely nothing available for any of the work which the committee would like to do."

In January 1939 a petition to reorganize was filed.   But the handwriting was already on the wall.  In 1946 the building was sold at auction for $830,000 after the Chelsea and Greenwich Presbyterian Churches were merged, forming the Village Church.  Rev. Whelpley announced that Sunday November 17 would be the last service in the Chelsea Church.

He explained to reporters that the building was erected during "the roaring Twenties, when we had the skyscraper-church idea because we though it was a way of keeping up with the times."  He now admitted that a church "must be a monument by itself" and not have "semi-commercial" characteristics."  The two-story church space was remodeled for the Vanguard Recording Studio.

Another Soviet made headlines in the spring of 1963.  On May 15 Boris Illashevich checked in.  The 58-year old was a language teacher.  Shortly afterward he raised the suspicion of a clerk in an upper-Broadway Army and Navy Surplus store when he purchased a United States Army .30-caliber carbine rifle and 15 rounds of ammunition.

Police entered his room at the Hotel Carteret where they found the weapon and ammunition.  Illashevich was arrested on the charge of possessing a weapon as an alien.  He did not offer a reason for arming himself.

In 1968 an investment syndicate headed by Nathan Brodsky, Milton Schapiro and Peter Jakobson converted the Hotel Carteret to apartments.   The former church-turned recording studio was transformed into a nightclub.   Ironically, for years the space where Presbyterians had worshiped was home to Twirl, a dance club frequented by Chelsea's gay community. 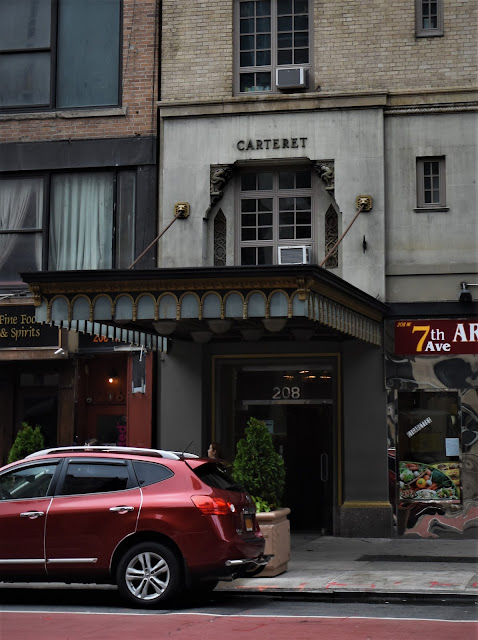 Today there are 262 rental apartments in The Carteret.   The Gotham Comedy Club has replaced Twirl.  Other than its regrettable retail storefronts, the building retains Emery Roth's wonderful 1927 flavor, including the multi-paned casement windows and the beautiful marquee.

photographs by the author
LaptrinhX.com has no authorization to reuse the content of this blog
Posted by Tom Miller at 3:40 AM