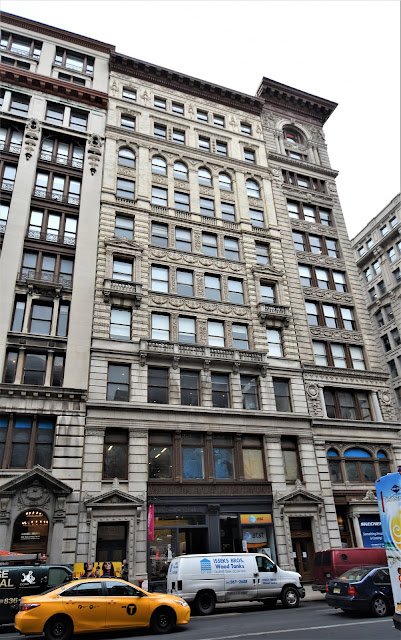 On October 26, 1895 the Real Estate Record & Guide pointed out that the last time No. 85 Spring Street had been sold was in May 1857.  The mention was made in reporting that the old building was purchased by the same buyers who a week earlier had bought Nos. 532 and 534 Broadway, around the corner.  The Spring Street property formed an L with No. 532.

Those buyers were Abraha Boehm and Lewis Coon, who had formed the real estate and building firm of Boehm & Coon three years earlier.  Seven years later the New-York Tribune would say they "did much in introducing the now well known iron skeleton frame construction in high buildings."  One of those had replaced the four and five story brick buildings at Nos. 532 and 534 Broadway.

Boehm & Coon hired architect Ralph S. Townsend to design the 10-story loft and store building.  Construction began on April 6, 1896 and was completed within nine months, on January 27, 1897.  The Renaissance Revival style skyscraper sat on a three-story rusticated limestone base. Classical doorways capped with triangular pediments and anthemia, flanked the storefront.  Above, beige brick was lavishly decorated by stone and terra cotta.  Intricate Renaissance panels embellished many of the pilasters, while wreaths and palms, and swags and torches decorated the spandrels.  Handsome psuedo-balconies provided dimension. 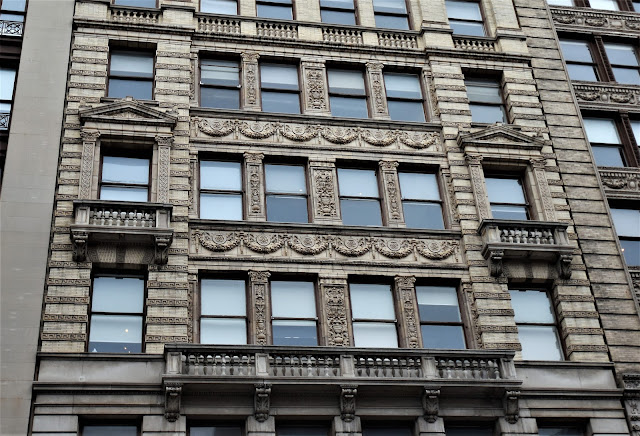 The upper floors filled with lace and embroidery companies.  Among the first was wholesale embroidery firm M. H. Pulaski & Co., which advertised in August 1897, "The matched sets of Cambrics will replay careful examinations.  Their Art Embroidery Department, embracing shams, scarfs and covers of all sizes and kinds will be found equal to the high reputation of the house."

Also in the building were Bosese, Pepperd & Co., manufacturers of lace trimmings; and the National Neckwear Company.  The neckwear it produced was not men's ties and ascots; but the stiff lacy collars for women's garments.


Interest in things Asian had been rampant for two decades at the turn of the century.  In 1903 the store space was taken by the newly-formed Kyoto Manufacturing and Trading Company.  The firm had been founded in April that year by Jiru Sakabe.

The 30-year old was described in Prominent Americans Interested in Japan and Prominent Japanese in America shortly afterward.  It said he "comes of a Samurai family," however, "Noble in birth but poor in means, Jiru Sakabe had from his early boyhood to struggle for an education."  After graduating from college, he went into business.  "It is a strange destiny that a Samuri, who inherits the should to rule or the hand to wield a sword, should have adopted the occupation of loss and profit accounts," mused the author.

Unlike most importers of Asian goods, his Kyoto Manufacturing and Trading Company would not deal in painted vases, Japanese fans and silk umbrellas.  Instead it imported and manufactured  "toilet brushes and nipponoid buttons" as well as "poker chips, martingale rings, rosettes, checkers, dice and dominoes."

Sakabe had arrived in New York in 1895.  When his named appeared in The New York Times on July 25, 1902, just months before his own firm was organized, it was not for his business successes.  It had to do with a bizarre incident in the Brooklyn house where he lived.

Salesman William C. Cheesman was an Englishman, but had lived in New York for a decade.  His wife, the daughter of a Anglican clergyman, became caught up in the fervor for things Asian while teaching a Sunday School class of Japanese and Chinese students.  She brought her passion home and, according to Cheesman, "Around the house she always wore a kimono, and gradually collected a large amount of Oriental bric-a-brac, in which she took a great interest."

Cheesman "had no special objection to the bric-a-brac," reported The New York Times, until her collection broadened to include Japanese businessmen.   When she took in three Japanese boarders, including Sakabe, he protested.  Mrs. Cheesman refused to send them away.

It all came to a violent end one Monday night in July 1902 when Cheesman came home late.  As he started up the stairs to his bedroom, "he was intercepted on the stairs by one of the Japanese, who refused to allow him to mount further," said the article.  Cheesman knocked the boarder down and started up, "but was immediately set upon by all three Japanese, who after overpowering him, pushed him into a bedroom and kept him locked up there all night."

According to Cheesman he was imprisoned all night and in the morning was ordered to leave the house.  He said his wife had tossed all his personal belongings onto the sidewalk, while "the three Japanese stood ready to enforce the command of eviction."

Cheesman filed a $25,000 suit against the three businessmen for damages and alienation of affection.  Their defense was that "the trouble with Cheesman was that his mind had been growing weak of late" and when he came home that night, his loud quarreling with his wife kept them from sleeping.  "They got up and locked Cheesman in the room to keep him quiet."

It ended in divorce and the businessmen finding a new boarding house.


The upper floors continued to see tenants in the lace and neckwear business.  Wholesale lace dealer S. M. Toplitz was in the building in 1907, as was neckwear manufacturer Charles G. Bluh.  That year Bluh was involved in an ugly divorce case.  His and his wife's court appearances at first cast sympathies on Charles.  On October 11, 1907 he pleaded with the judge to permit him to see his 10-year old son.  Justice Blanchard ordered Laura Florence Bluh to allow her husband weekend visitations.

But the following month the source of her animosity was clearer.  Laura told the judge that for five years after their marriage the couple lived with her parents, "who supported them."   Then she received an anonymous note informing her that she was being cheated on.

One evening she dropped into her husband's office unannounced.  The Times reported that "she found him entertaining there 'a comely young woman.'"  The uncomfortable confrontation resulted in Bluh's telling Laura to file for divorce; but she refused in order to prevent him from marrying the woman.

She obtained a $12 per week alimony settlement in November 1907; causing Bluh to plead poverty.  The Times reported he "says his wife's mother is worth $50,000, while he is poor and has to live in one room at 619 Lexington Avenue."


The 1920s flapper era emphasized a boyish female form.  The long-waisted Boyshform Brassiere was engineered to flatten the wearer's voluptuousness.

Other women's underwear manufacturers in the building through the 1930s and even into the '50s included Pearl Crafts Underwear Co., Inc., Milton Undergarment Co., and Randy Barbara Mfg, Co, makers of slips and lingerie.

As the last quarter of the 20th century approached the neighborhood and its buildings suffered serious neglect.  The store space was home to the Georgina Restaurant.  Throughout the 1970s the eatery was cited again and again for "serious Health Code violations."  Finally the space became home to Dellek office furniture in 1981.

The district was seeing vibrant rebirth at the time as galleries and trendy shops engulfed Soho.  In November 1988 the third floor became home to the P.P.O.W. Gallery that exhibited contemporary art.   Around the same time the John Good Gallery moved into the second floor.

In April 1996 the trend continued when Stefani Greenfield opened her boutique, Scoop, in the same ground floor space where a Japanese businessman once sold toilet brushes and roaches were later found in a diner. 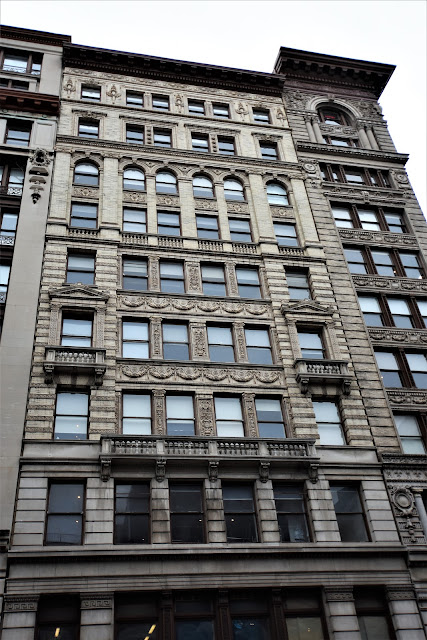 Ralph Townsend's elegant Renaissance Revival business building has survived 120 years with little alteration.  Even many of the cast iron elements to the storefront--normally the first to go--are intact.