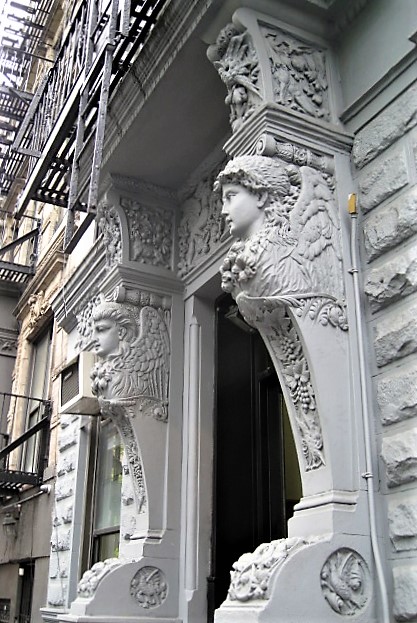 In the decade before the outbreak of Civil War the Chelsea neighborhood was well developed.   On Eighth Avenue a few Federal-style houses and shops still survived among modern stores; while on the side streets wide brick mansions began sharing the blocks with merchant-class homes.

On West 22nd Street between Seventh and Eighth Avenues--a block of respectable private residences--was the home of Henry H. King at No. 264.   A merchant doing business at No. 134 Front Street, he had married Nancy Hays in 1827.  The couple's two children, Caroline and Oliver, were both grown--Caroline was married and Oliver was a doctor, having graduated from the College of Physicians and Surgeons in 1852.

Henry and Nancy may have been headed for Europe in the fall of 1856; but for whatever reason he tried to find a new position for a servant.  His advertisement in The New York Herald on October 1 read "The advertiser wishes to find a place for a faithful, honest girl, who is a good plain cook, washer and ironer."

The couple had moved from West 22nd Street by the end of the war and, somewhat surprisingly given the residential nature of the block, their home was replaced by a three-story brick boarding stable.   It was owned by Richard Simpson who leased it in 1868 to James Haws for three years.

As with most boarding stables, Haws not only housed the horses and vehicles of local residents; but rented rigs--the 19th century version of a rental car business.   And when patrons wished to sell an animal or carriage, negotiations were held here.  One ad, on April 17, 1869, offered "For Sale -- A sorrel horse; 6 years old; warranted sound, gentle and kind; suitable for coupe or carriage horse."

Before Haws's lease was up, he chose to give up the stable business.  On December 29, 1871 he advertised "For sale--Stock, lease, fixtures and good will of Livery Stable, in good locality, cheap for cash; good reason for selling."

For a few years it was operated by J. D. Hopkins.  As had been the case with Haws, his patrons sometimes sold their horses or equipment.  One, in May 1874, advertised "For sale cheap--A good barouche and a double set of Harness."  And another, later that year, offered "A fine stylish cabriolet or single Brett, with children's folding seat, but little used.  Also a bay Horse 16 hands high, very gentle."

By 1878 No. 264 was known as the Tontine Stable.  The still-upscale atmosphere of the neighborhood was reflected in the vehicles stored here.  The "stylish two-seat Stiver Phaeton" offered for sale that year had originally cost its owner $800--more than $19,500 today.  The cost to board a horse at the Tontine Stable was $20 per month at the time; or almost $6,000 a year today.

When Richard Smith sold the stable building to Jane Smith in May 1889 for $16,500, Tontine would have to find a new place to do business.  In reporting on the sale the Real Estate Record & Builders' Guide noted vaguely "new building projected."

Jane Smith and her husband, Archibald, were developers and they quickly demolished the brick stables to replace it with a tenement building.   The five-story structure was, on the whole, little different from most such buildings being erected at the time.  The basement and first floor were clad in rough-cut brownstone and a five-step stoop led to the centered entrance.  Four stories of planar brownstone backed crisp architrave openings, and the whole was capped by an aggressive cast cornice with a peaked pediment. 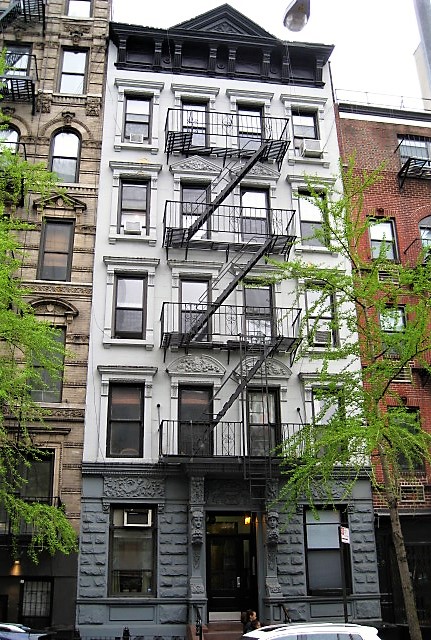 What made the Smiths' building stand out was the extraordinary carved decorations.  Tenement buildings of the 1890s routinely wore overblown ornamentation.  The vast workrooms where the stone carvers worked, active with the clinking of chisel against stone, were essentially factories.

One letter to the editor of The New York Times explained:


“A stone carver is an artist and a skillful mechanic.  He must be an expert in freehand drawing.  He must be a modeler.  Styles of at least a score of different periods in history must be common knowledge to him.  A study of nature in its various forms is necessary—foliage, flower and fruit, as well as the anatomy of the animal and the human body.  He must have an inborn and cultivated sense of harmony and contrast.  But all these studies and talents are nil if he cannot use the chisel and the mallet and the different tools of his profession on delicate and costly material for sculpture, natural stone, marble and granite.  A different technique is necessary to apply to limestone, marble, granite and sandstone."

The meager wages paid to these artists, sadly, did not equate to their craftsmanship.  The writer added “And after several years of concentrated effort and application, when he becomes a proficient mechanic he finds himself unable to properly care for his family.”
The most advanced stone carvers were often given broad liberty in their creations.  And that seems to have been the case with No. 264 West 22nd Street.  While it appears that at least three carvers were at work on its decorations; the most adept of them used it as a showcase of his artistry.

Most noticeable were the two winged figures of the entrance.  Their finely-executed faces--slightly open lips, enigmatic expressions and engaging stares--speak of advanced training.  The Victorian hairstyle of the female suggests the sitter was not simply pulled from the sculptor's imagination, but was a real person. 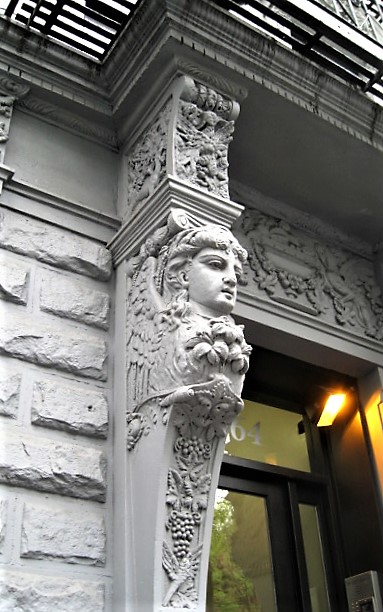 At least one other stone carver worked on the abundant decorations.   The work of a less accomplished artist appears in the spandrel panels and pediment portraits.  Above the first floor openings cherubs awkwardly float among otherwise well-carved ferns and fruits.  Over the doorway a confusing panel depicts a classical, swagged-draped bowl of fruit flanked by what appears to be a disembodied jumble of thighs, calves and wings. 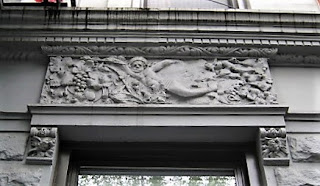 In March 1892 the Smiths sold the building to Josephine and Oliver P. Buel, who lived in Yonkers.  The couple paid $48,000, or nearly $1.3 million in today's dollars.  The title remained in Josephine's name until 1922 when she sold it to Samuel Shepard.


As the mid-20th century approached, the Chelsea district had changed from an upscale residential neighborhood to a sometimes edgy, even dangerous, one.   During World War II a longshoreman, Thomas Scanlon, lived here, while a few blocks to the south Margaret Houghton lived at No. 221 West 15th Street.  She worked as a telephone operator while her husband, a U.S. Army soldier, was fighting overseas.  She also busied herself with a close relationship with Scanlon.

In 1944 Scanlon was 25 years old and had already earned a long police record.  His six arrests included one for homicide.  After he crossed paths with Corydon Kimball on February 10, he would add one more arrest to his record.

Kimball was on leave in New York after his ship was torpedoed.  He had $2,400 in his pocket that night when he was beaten and robbed along the river front.  Police received information that it was Scanlon who committed the assault.

They tracked him to Margaret Houghton's apartment at 5:40 a.m. on February 16.  A search turned up $850 in her sugar container.  She denied knowing anything about a robbery.  After Kimball picked Scanlon out of a lineup later that morning he confessed.  Margaret was charged with receiving stolen property.


Two decades later another resident ended up on the wrong side of the law.  Ralph Haney was described by The New York Times on September 27, 1966 as a "muscular 24-year-old bricklayer."  Haney's abuse of his wife was not confined to their apartment.  When Patrolman David Tierney heard Haney "cursing his wife" in Times Square on the night of September 26, he approached and asked him to stop using profanity in public.

Instead, the bricklayer attacked the cop.  In the scuffle he grabbed Tierney's nightstick and began pummeling the officer.  An off-duty patrolman, Albert Shick, saw the fight and rushed to Tierney's aid.  He, too, received the force of the billy club.  But that was not the end of it.

The Times reported "Police Capt. Richard Nicastro, in street clothes, then tried to help the two patromen and was also struck by the nightstick-wielding bricklayer."  It took several other policemen who rushed to the scene to subdue Haney.

Nicastro, Shick and Tierney were all treated at St. Clare's Hospital.  Harney was not injured.  He was, however, locked up--charged with felonious assault, disorderly conduct and resisting arrest."

At some point the owners tried to spruce up the Victorian facade with a paint job.  While no doubt done with the best of intentions, painting masonry ranks near the top of the list of mistakes.  Paint traps moisture, leads to damage, and in the case of porous materials like brownstone, seeps in and stains it.  Paint also obliterates the architect's intended contrasts in materials and colors. 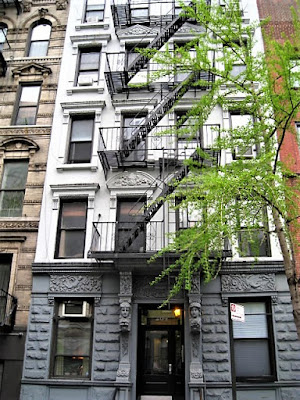 And in the case of No. 264 West 22nd Street, the gray coloring clouds the striking sculptural exhibition left for us to enjoy more than 125 years ago.