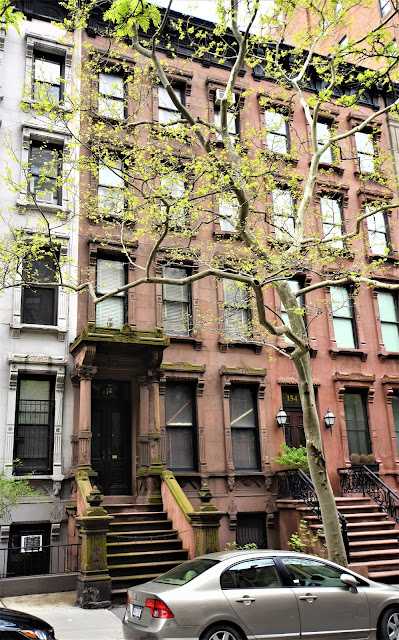 Real estate speculator George J. Hamilton took full advantage of the flurry of development that was quickly changing the Upper West Side from hinterlands to vibrant suburb in the early 1880s.  In 1882 he began work on a new project--five upscale brownstone-fronted homes on the south side of West 73rd Street, between Columbus and Amsterdam Avenues.

Hamilton commissioned architect Martin V. B. Ferdon to design the residences.  Completed the following year, their architrave openings went a step further than the norm with carved cornices and robust brackets.  Ferdon gave a nod to the newly-arrived Queen Anne style with sunbursts included in three of the five cast metal cornices (Nos. 146, 150 and 154).

But it was the entrances where the architect made his statement.  Heavy geometric newels flanked the steps, which were protected by solid wing walls.  They led to imperious columned stone porticoes that projected beyond the porch.  Incised and deep relief carvings, anthemion motifs and intricate capitals combined to present daunting introductions to what lay within.

Hebert was a prominent grain merchant, partner in H. B. Hebert & Co. at No. 81 New Street, and president of the Produce Exchange.   He was active in the Church of the Divine Paternity, serving as a Sunday School superintendent for years.

Henry and Emma had seven children--Elizabeth, Grace, Jane, Letitia, Emma, Henry, and Kate.  The prominence of the Hebert family was evidenced when Emma Maria was married to Edward Banks Keeler in the Church of the Divine Paternity on November 1, 1888.  Following the ceremony, guests were invited to the "large reception" in the 73rd Street house.  The New-York Tribune reported "Among the guests present were Mr. and Mrs. Andrew Carnegie, Mr. and Mrs. Horatio St. John, Mrs. J. F. de Navarro A. F. de Navarro, General and Mrs. Clinton B. Fisk" and other notable names in Manhattan society and industry.

Six years later Letitia was married.  The New York Times reported on April 5, 1894 "A large number of society people attended the wedding of Miss Letitia Blanchard Herbert [sic] and Byron Wightman Green, Jr., at the Church of the Divine Paternity yesterday afternoon."  As had been the case with Emma's reception, some of the most recognized names in New York City were guests in the house afterward.  Among them were Helen Miller Gould and her brother Frank, children of multi-millionaire industrialist Jay Gould.

By the time Henry and Emma announced Grace's engagement to George Sudders of Philadelphia on November 1, 1895, Hebert's focus was as much on the proposed project to expand the Erie Canal as on his business.  By the turn of the century he accepted the post of the Chairman of the Canal Committee of New-York.

Rather unexpectedly, as their children married and left the expansive house, the Heberts rented spare bedrooms.  In 1899 Luis Marx, Cuban tobacco grower, listed No. 152 as his New York address and the Louvre Hotel as his Havana residence.  Marx also represented the Cuban tobacco growers in Washington as "Special Commissioner."

A year later the widowed Abram E. Bamberger and his two children were here.  A merchant with the Cotton Commission, Bamberter was born in Louisville, Kentucky in 1854, but was educated in New York City public schools and the College of the City of New York.   His wife, the, the former Fannie Einstein, had died on June 9, 1890.  Son Lewis was 16 years old in 1900, and Alice, was attending Barnard College.

In the meantime, the Hebert family continued to shrink as one-by-one the children married.  On April 15, 1903 Martin Stenson Hebert was wed to Anna Townsend Burnett in a socially-significant ceremony in the Church of the Incarnation.   The reception was held at Sherry's.

Henry's successful work in lobbying for legislation to improve the Erie Canal contributed to his high esteem among New York's citizenry.  Ellsworth Loftus wrote to the Editor of The New York Times on August 6, 1904 suggesting he be considered for Governor, calling him "of the highest character, warm hearted and broad minded, yet of the greatest caution and method, of good executive ability and a true and loyal Democrat, he is the ideal candidate."

In August 1909 Henry and Emma sold the house to "Dr. Van Riempst," as recorded by the Real Estate Record & Builders' Guide.   Title to the house, assessed at $25,000--just under $675,000 today--was put in the name of Jessie Shoepkens Van Riempst.  Abram Bamberger moved to the Ansonia Hotel, and the Heberts moved to No. 64 West 92nd Street, where Henry died on September 6, 1914.

If the Theodore Van Reimpst family lived in the West 73rd Street house, it was not for long.  In May 1914 Jessie leased the house to Edward J. Ware.  A well-respected doctor, Ware's wife, Carrie Barlow Ware, had died on March 17, 1906.   He had a daughter, Katherine, and two sons, Edward Richmond and Barlow.  The family had a summer home in Bridgehampton.

Ware came from a wealthy family and was born in a mansion on Fifth Avenue at 38th Street (replaced by Stanford White's magnificent Tiffany & Co. building).  He graduated from the College of Physicians and Surgeons in 1885.

The young doctor's work on the Upper West Side began in 1888 when he was appointed the position of physician of The Children's Fold.  An orphanage of sorts for impoverished children, the Fold had one main objective--to train orphaned or unwanted children to be servants.

Their formal education was, rather astonishingly today, ignored by the city.  The Fold's 1889 report explained "The rapid growth of population on the west side has overfilled the public schools and left hundreds of children to receive such education as they best may...In the meantime the Fold children are excluded."

By the time he moved into the 73rd Street house he was one of the staff of surgeons for the Bloomingdale Clinic and a member of the New York Academy of Medicine.  His club memberships included the Old Settlers Club and the Harvard Club.

In 1916, with World War I raging in Europe, young Edward was stationed in the Military Training Camp in Plattsburgh, New York.  Army documents listed his West 73rd Street address and his profession as "student."

On September 29, 1918 Ware died suddenly in the house.  His funeral was held in St. Michael's Church on Amsterdam Avenue where he had been a vestryman for many years. 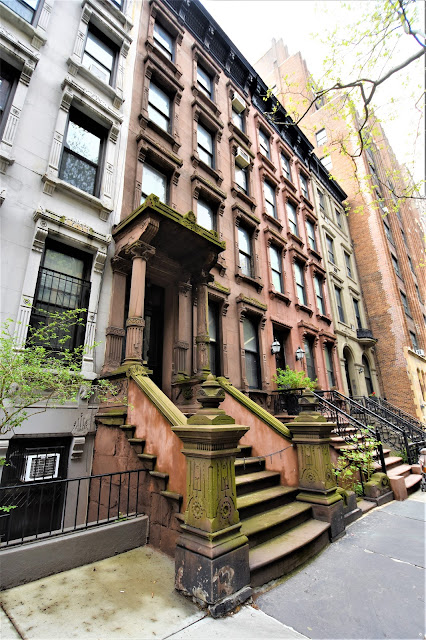 The Jessie Van Riempst wasted no time in leasing Ware's office.   Two weeks after his funeral an advertisement appeared in the New-York Tribune.


Above the doctor's office, the main house as leased to Mrs. Helen M. Webb.  She was regularly listed in Club Women of New York, and was a member of the Legislative League, an organization of early feminists.  The League not only had fought for women's right to vote, but for equitable divorce and inheritance laws, and equal pay for women and men.  Helen was followed in the house in May 1932 by Mrs. M. Gallati.

By 1936 much had changed along the block of West 73rd Street.  With the Great Depression, the once-fashionable residences were being operated as rooming houses.  Jessie Van Riempst followed suit and in 1936 was slapped with a "multiple dwelling violation" by the Department of Buildings.

Now widowed, Jessie died in 1939.  Her estate sold the 73rd Street house to an investor.  While it continued to be operated as rented rooms, it somehow escaped the overall external brutalization suffered by the rest of the 1883 row. 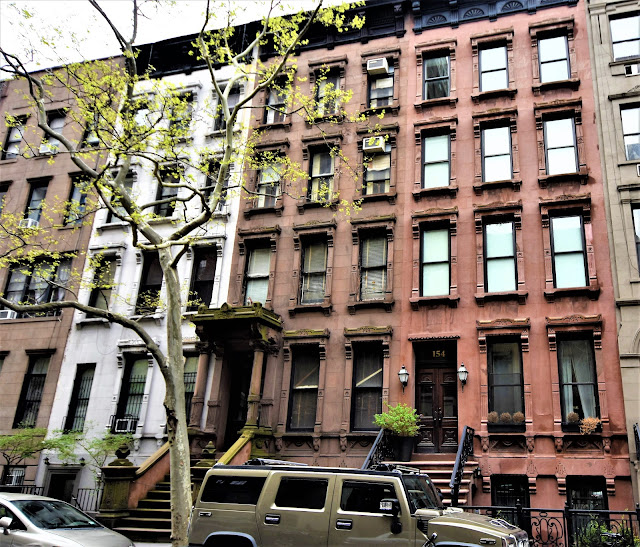 In 2002, when it was converted from an SRO to a "Class A Multiple Dwelling," it alone still retained its marvelous stoop and portico.  Despite owners' apparent indifference to the severe damage of weathering which has created a near haunted house appearance, the Hebert house still exudes the haughty attitude of a once-proud dowager.