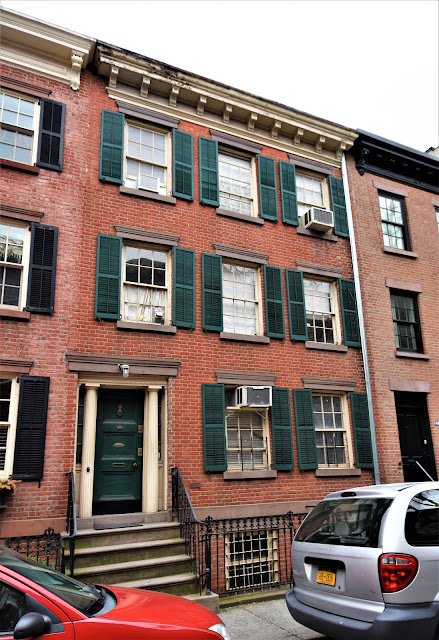 The bucolic nature of Greenwich Village would be upset after New York City doctors, in 1825, recognized the first signs of a terrifying disease--cholera.  Only two years earlier citizens had endured an epidemic of yellow fever.  At that time many residents with the means to do so fled north to Greenwich Village.  Now an even greater threat loomed.

Speculators rushed to erect housing for the fugitives.  The New York Evening Post described the hysteria saying "The roads, in all directions, were lined with well-filled stagecoaches, livery coaches, private vehicles and equestrians, all panic-struck, fleeing the city, as we may suppose the inhabitant of Pompeii fled when the red lava showered down upon their houses."

Reason Street, which ran roughly east-west from Washington Place to the Hudson River, had been named in honor of Thomas Paine and his The Age of Reason, first published in 1794.  Here, between Bleecker and Bedford Streets, Charles Oakley built three brick houses in 1826 (Nos. 47, 49 and 51).  He would add four more along the block in 1828.

No. 47 Reason Street, like its neighbors, was two and a half stories tall with a brick front.  A single dormer punched through the pitched roof.   The Flemish bond brickwork and simple fascia board below the cornice were expected in the late Federal style house.  But its 21-foot width, handsome iron railings and fencing, and elegant entrance marked it as the home of a financially-comfortable family.

The first residents of the row had all participated in their construction.  No. 47 became home to mason Jacob Naugle.  Exactly how long he remained here in unclear.

By the time the house was completed, the name of Reason Street had been widely bastardized to Raisin Street.  But it was not this unflattering usage that prompted Trinity Church to lobby hard for a name change.  Thomas Paine's challenges to the Bible and his promotion of deism in favor of Christianity in The Age of Reason was rebuked by the church.  (Even Theodore Roosevelt, more than a century later, would call Paine a "filthy little atheist.")

Trinity Church had a new name in mind:  Barrow Street.  Thomas Barrow, who died in 1825, had been a wealthy vestryman.  An artist, he created an engraving of the ruins of Trinity Church following its destruction by fire in 1776.   In 1828 Reason Street became Barrow Street.

As Jacob Naugle and his neighbors (who included Charles Oakley) came and went, they were somewhat impeded by the old public well and pump that had been in place long before the houses.  The problem was that it sat directly in the middle of the road.  Oakley corrected the situation by petitioning the Common Council in May 1829 "to remove the Pump from the Well now standing in the Centre of the carriage way of Barrow (late Reason Street) and which was placed there before the Street was ceded to this Corporation."  The Council agreed, saying "the Well in its present location is an Obstruction to the Street and a Public Nuisance." 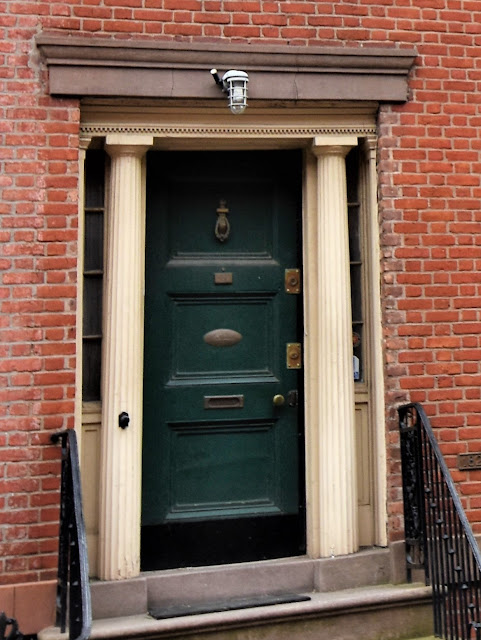 In 1829 Samuel Kettell had written of Nack, "His poetry is quite respectable, but the most remarkable fact concerning it, is that the author is deaf and dumb.  He lost the faculty of speech and hearing, by disease at an early age.  His writings show that he has as nice a perception of the harmonies of verse, as those in whom the senses are perfect."

Nack was, in fact, the first deaf author to be published in the United States.  His first volume, The Legend of the Rocks and Other Poems, was published when he was 18, in 1827.   He married in 1838 and the couple had three daughters.  The youngest, Anna Virginia, tragically died of a "concussion of the brain," on June 14, 1845.

Nack was a widower by the time he and his two daughters, Mary Janette and Evelina, moved into the Barrow Street house.  They were joined by Nack's two spinster sisters, Sarah and Elizabeth, who would have been in charge of running the household.

A little over a month later the family had a more joyous event.  On November 7 Evelina was married to William A. Ballantine.  A lawyer, the groom was a member of Morris & Ballantine with offices nearby at No. 52 Grove Street.

James Nack may have given No. 47 Barrow Street to the newlyweds.  They moved in, while Nack and Mary Janette moved to No. 38 Grove Street.  Tragedy continued to follow the poet and after what was described as a "long illness," Mary Janette died there on February 27, 1864 at the age of 21.

The Ballantines, too, suffered heartbreak.  On August 7, 1862 their first child, William Frederick, was born.  The following year the family was summering in Highland Mills, New York.  There, just three days before his first birthday, little William died.  He was brought back to Manhattan where, once again, a funeral was held in the Barrow Street house.

Around six years later another child, Evelyn, was born.  The family left by the last decade of the 19th century, but retained possession of the house.  Before then they had updated it by raising the attic level to a full third floor and adding fashionable cornices above the window lintels.

In 1891 Wright Holcomb was leasing No. 47 Barrow Street.  A lawyer with offices at 49-51 Chambers Street, he was better known as a Tammany Democrat.  That year the 48-year old was elected to the State Assembly.

The University Magazine lavished the politician with praise.  "His law office in this city is, as might be supposed, a bee hive of industry and activity.  He comes of the best American stock, being directly descended, on his maternal side, from Gov. Wm. Bradford, of Plymouth Colony and on the paternal side from English stock which emigrated from Old to New England early in the 18th century."

The Evening World agreed, saying on January 21, 1891 "Mr. Holcomb is an earnest, fluent speaker, who will add greatly to the strength in debate of the majority."

A block to the east, at No. 15 Barrow Street, lived Alderman Mead.  Following a meeting in Webster Hall that ran late into the early morning hours of June 17, 1891, Mead arrived home to find a stranger standing in front of his house.  The Sun reported "He took a good look at the man, who didn't seem to be at all put out by it, and then entered the house.  As he entered the hallway he saw another man half way up the stairs with a bundle in his arms."

Surprised, the burglar dropped the bundle and hit the floor with one leap.  Although Mead attempted to get out of his way, the "man ran plump at him, struck him in the chest, and then slipped out into the street and escaped."   Mead found another bundle on the second floor.  Both of them contained articles of his clothing.

Two days earlier, on Sunday morning, while Holcomb was in Washington, a burglar had broken into his house and taken a suit of clothes.  Caught following the Mead break-in, the thief, who turned out to be a homeless man, was captured.  "In his pocket were a lot of letters and railroad passes, and also a pocketbook with Mr. Holomb's name on it," said the newspaper.

Redmond Porter explained he had gained entrance to No. 47 Barrow by breaking a window in a vacant house on Commerce Street, going into the backyard, climbing over a shed, then opening a window to Holcomb's bedroom.

Over the next two decades William and Evelina Ballantine leased the house to a series of tenants--Catherine Burch after Wright Holcomb, Harry J. Quinn in 1908, Allen D. Orr in 1910, M. H. Franey in 1915, and in November 1918 to artist Ruth Murchison.

Murchison was know for her portrayals of peasant and servant women--often wearing traditional Dutch costumes.  In describing her "several versions of a peculiarly unbeautiful Vollendamer maid" at the Goupil Galleries in January 1916 an art critic for The International Studio was a bit unkind.  "In spite of a somewhat postery appearance, the canvases are distinctly interesting in colour and design, even if somewhat crude."

Following William Ballantine's death, Evelina transferred the title to No. 47 Barrow Street to Evelyn.  Around 75 years after her poet grandfather purchased it, Evelyn sold the house in 1920 to Florence Hemsley Wood, the widow of prominent architect William Halsey Wood.

Florence had been born into a well-to-do Pennsylvania family and was educated in private schools.  In 1889 she married Wood, who was well known for his ecclesiastical architecture.  The couple had three children, including Emily, who still lived with her mother.  In 1915 the Woman's Who's Who of America had noted that Florence was "interested and active in societies and activities of [the] Protestant Episcopal Church.  Favors woman suffrage."

A year after purchasing the house, Florence made what was perhaps a surprising revelation.  "Mrs. William Halsey Wood of 47 Barrow street yesterday announced the marriage of her daughter, Miss Emily Hemsley Wood, to Mr. Wilson Ashley Burrows," reported The New York Herald on May 9, 1921.  The groom had served as Sergeant-Major under Major Fiorello H. La Guardia during the war.

Florence's lack of public fuss over the engagement and wedding may have been due to the splashy announcement of Emily's first engagement, on June 21, 1914.  Her marriage to Robert William Harris never came to be.

Florence Wood sold the house in 1927 to "an investor," who resold it in 1933 to "a Mr. Prout," according to The New York Times.  Although Prout announced his intentions to live in the house, he leased it to John Howard Lawson in 1935.

Throughout the rest of the 20th century until today, the picturesque structure has remained a single-family home.  Except for the renovations of the 1880s and the later addition of exterior shutters, it is a well-preserved reminder of a time when carriages had to circumvent a public well in the middle of the street.