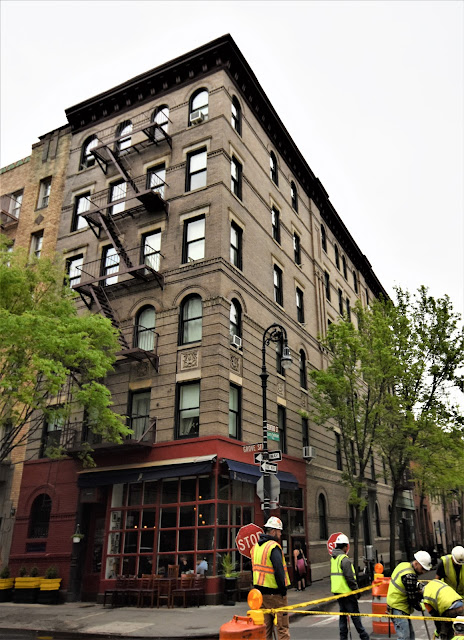 As the 19th century drew to a close, Greenwich Village was no longer the quiet hamlet it had been nearly a century earlier.  Apartment buildings replaced many of the old, low homes of the 1820s and cafes and artist studios were appearing.

In the fall of 1898 partners Gustav J. Dohrenwend and Otto A. Leister purchased the three old buildings at Nos. 90 and 92 Bedford Street, and No. 20 Grove Street from David B. Cocks.  No. 90 Bedford was a three-story wooden house, No. 92 was a three-story brick house (both converted to "tenements"), and the corner structure at No. 20 Grove was a Federal-style brick house converted at street level for a store.  It currently housed William Hineman's grocery store.  A Civil War veteran, Hineman had only one arm; having lost the other in the Second Battle of Bull Run.


Leister & Dohrenwend wasted no time in demolishing the old structures.  They hired architects Schneider & Herter to design a six-story "store and flat" building, the plans for which were filed in November.  The term "flats" as opposed to "tenement" in the filings suggested that these apartments would be targeted to middle-class residents.  The cost of the building was estimated at $26,000--more than $765,000 today.


Terra cotta spandrel panels between the second the third floor openings carried on the Renaissance motif with masks, dolphins and shields.  The architects' treatment of the three-story chimney backs was striking.  Rising from ornate cartouches and executed in masterful brickwork, they included frame-like panels, and projecting pilasters joined by arches.

No. 90 Bedford Street became home to respectable families who brought little unwanted attention to the building.  Sons went off to fight in World War I, then World War II.  One of them was Ralph Sposato who served in the Army Air Forces during the Second World War.

Early on the morning of April 19, 1946, just seven months after the war ended, the 23-year was drinking in a nearby bar.  Also in the bar was Marine Corporal James Ward, who lived in Bayonne, New Jersey.  Normally the men would have shared a camaraderie; Ward had seen service in Guadalcanal and the Solomons.  But the all-American Sposato took a marked exception to a remark he overheard.

Ward was unhappy with the newly-formed United Nations.  He told a drinking partner "In view of the way things are shaping up, I think it might have been all right if Hitler had won the war and we had one group of people ruling the world, such as the U.N. is trying to do now."

Sposato walked over and asked the marine what he meant, adding that he was disgracing his uniform.  Ward simply replied "Go back where you came from."

The next thing he knew, he was looking up at the Sposato from the floor.  He had been knocked down with a single punch to the jaw.  Ward called for a policeman; but he probably should have let the matter die.

When Magistrate Anna M. Kross heard the reason for the assault, she notified Ward's commanding officer and the marine found himself explaining his remarks to a Marine Corps inquiry.  Following the hearing (his case was adjourned until May 10), Ward told a reporter he did not understand why everyone was upset, "just because I said one man should rule the world.  I was making a comparison to the U.N., itself a dictatorship," he said.


One later resident of No. 90 Bedford Street would most likely have sided with Corporal Ward.  Sharon Krebs was a free-lance writer and was living on the second floor here by the mid-1960s.   Divorced from Dr. Allen Krebs, a professor of sociology at Adelphi University, she held a master's degree from the University of Michigan.

Kresbs's articles would not be seen in popular magazines about home decorating, travel or the theater, for instance.  She was far more interested in politics and social issues.

On September 8, 1966 Sharon was arrested for peddling without a license and obstructing the sidewalk.  The 37-year old activist had set up a folding table to sell anti-Vietnam war flags, pamphlets and buttons.  She was defended in Criminal Court by the New York Civil Liberties Union, and her case was dismissed on September 12, the following year.

But it was not the last the courts would see of Sharon Krebs.

Two years later Vice President Hubert Humphrey arrived in New York to speak at Columbia University.   Thirty-six protestors were arrested on July 23, 1968.  Two of them stood out.  Sharon Krebs and Key Martin were held on $1,000 bail for "inciting to riot and disorderly conduct."  Their means of demonstrating went further than shouting slogans and carrying signs.  They stripped naked and waved a pig's head in the air.

Kreb's activism turned darker and more radical.  She wrote regularly for RAT, an underground newspaper associated with revolutionary movements.  By 1970 she had joined the Weathermen, or Weather Underground, the violent terrorist group formed at the University of Michigan, Kreb's alma mater.  The radical Weathermen were responsible for bombings across the country.

Also living at No. 90 Bedford Street by now was a close associate of Krebs and another Weathermen member, 25-year old Joyce Plecha.  On December 4, 1970 the women, along with four other Weathermen, one female and three men, were arrested just before dawn on the Upper East Side as they were preparing to bomb the First National City Bank at No. 1275 Madison Avenue.  The act was intended as a protest on the first anniversary of the death of Black Panther leader, Fred Hampton.  Undercover detectives had been trailing the suspects, including Krebs and Plecha, for months.

Armed with search warrants, police searched Kreb's apartment.  The New York Times remarked "They emerged with a box of items, including Vietcong flags, but declined to comment."

All six were indicted a few days later not just for the attempted bombing of the bank, but for conspiracy to bomb President Nixon's former law offices, a New York University building, and two police stations--the 9th Precinct and the new 6th Precinct building, still under construction.

The group all pleaded guilty on March 18, 1971, the day before their trials were scheduled to begin.  Their sentencing was held on May 7.  Joyce Plecha received a sentence of three years.  Sharon Krebs was given the maximum--four years in prison.  In imposing sentence, State Supreme Court Justice Harold Birns said "All were partners in a criminal enterprise, and their political beliefs in no way mitigate the enormity of the crime."

At the time the store was home to The Eagle Gallery.  In 1973 it was replaced by Luminere Creations.  Owned by lighting designer Mildred Shulman, it offered her very 1970s decorative lamps, like the Firefly Lights.  "They're cubes, orbs and rectangles of transparent smoked Plexiglass with tiny lights flashing on and off inside," wrote Ruth Robinson in The Times on June 11, 1973.  "Lamps are her forte, but don't come to Luminere Creations looking for the kind to read by.  Hers are strictly ornamental."

On September 22, 1994 the first episode of the television sitcom Friends was aired.  Characters Monica and Rachel shared an apartment across the hall from Joey and Chandler.  While producers attempted to keep the location of the building shown in the exterior shots "secret," it did not take Greenwich Village residents long to recognize No. 90 Bedford Street.


For years Moustache, a Middle Eastern restaurant at street level on the Bedford Street side, has been a Village destination.  It was joined in May 2006 by The Little Owl, which serves both Mediterranean and American fare, in the Grove Street storefront.

By then Friends had been off the air for two years--a fact that does not discourage fans from still calling No. 90 Bedford Street "the Friends building."