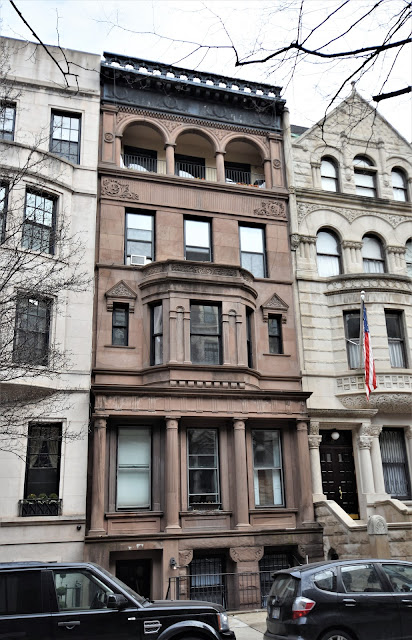 Doubling as architects and developers, Robert N. Cleverdon and Joseph Putzel began construction of nearly the entire northern blockfront of East 94th Street between Fifth and Madison Avenues in 1892.  Designed as two projects--one group of five houses, the other of six--the Romanesque Revival residence were aimed at the upper class.  Plans projected the building costs to be $20,000 each; more than half a million dollars today.

The more easterly row, Nos. 15 through 25, were designed in an A-B-C-C-B-A pattern.  The two end homes strayed from the strictly Romanesque Revival style with striking results.  While the other homes displayed the expected squat or beefy columns with complex medieval capitals, the parlor levels of the end houses were formal and classical.  Four stately, fluted Doric columns upheld a purely Greek entablature.  The Doric order reappeared at the top level in a dramatic and visually stunning loggia.


The second floor was dominated by a projecting bay.  The shape of the oversized, triangular pediments of the little flanking openings, too, balked at the Romanesque; while conceding to the style in the carved decorations.  Below the cast metal cornice, which upheld an unusual and decorative arcade-like parapet, was a frieze of neo-Classical wreaths and garlands.

Leon Hirsch was 55-years old at the time.  He had come to New York from his native Paris when he was 7 years old.  An enterprising youth, he started his own business at the age of 17 when he noticed an opportunity hiding in plain sight.

Shoe manufacturers provided retailers with samples to be used by their "drummers"--the men who stood on the sidewalk in front of the stores to lure customers inside.  When the season was over and new styles appeared, the samples were returned.  Unable to sell them as new, the makers discarded them.  The teen recognized that the practice was not only as a pitiable waste; but a splendid business opportunity.

Hirsch began buying the nearly-new samples at absurdly low prices.  The manufacturers were, of course, eager to get rid of them with at least some cash return.  He then resold the shoes, prompting The New York Times to later note "He then made a more or less secure corner of the sample shoe market in New York for some time, and his business grew."

His business not only grew, but made Hirsch rich.  By the time he purchased the 94th Street house, he was also heavily investing in real estate.

The first major event in the house was the wedding of daughter Aline to Dr. Henry Spitzer in January 1899.  The social stature to which the boy who resold shoe samples had climbed was evidenced by the wedding being covered by the New-York Tribune.  The article noted that Aline's lace veil was "held in place by a diamond ornament, a gift from the bridegroom."

In January 1909 Hirsch caught a cold traveling between the house and his shoe store in the Centre Market on the Lower East Side.  On the 29th it developed into pneumonia and he died at the age of 65 just five days later on February 3.

Financially, his death could not have come at a more inopportune time for Sarah.  His estate, all of which was left to her, was tied up in what The New York Times called "large property holdings."  But the devastating effects of the Financial Panic of 1907, considered one of the three worst depressions since the end of the Civil War, were still being felt nationwide.  There was still a $20,000 mortgage on the 94th Street house and the real estate environment made liquidating the Hirsch holdings impossible.

Sarah kept up appearances, while she gleaned the income from the properties.  In November 1913 daughter Nannette was married to the well-to-do lawyer Jacob Newman in the Hotel Gotham.   Sarah's brother, Charles Straus gave the bride away.  He was president of the Board of Water Supply of the City of New York.  No one in the ballroom that afternoon would suspect that Sarah was struggling.

Society weddings were expensive events.  One week after Nannette's, Sarah announced the engagement of Gladys on December 7, with the wedding to be held in June 1914.   It may have been the cause of the family's selling of Leon's art collection.

On January 23, 1914 the American Art Galleries announced the upcoming "unrestricted Public Sale" of the "private collection of valuable paintings by the Old Masters and early English painters formed by the late Leon Hirsch."

Then on March 29 Charles Straus, as executor of Hirsch's estate, petitioned the courts "for leave to place a second mortgage of $15,000" on the 94th street house.  Straus was frank in describing his sister's financial plight and explained that all efforts to liquidate the Hirsch real estate were fruitless.

The wedding of Gladys to William W. Silberman was held in the house on June 6.  Charles Strauss once again stood in for the bride's father in giving her away.  This would be the last social event Sarah would preside over here.  She died on December 4 that year.

The family leased the house to Dr. Antonio M. Crispin, finally selling it to him in October of 1920.
Born in Havana, Cuba in 1871, he had come to New York at the age of 7.  When just 20 years old he received his medical degree from the Bellevue Medical School.

He and his wife, Dorothy, had two daughters and one son.  By the time he moved into the former Hirsch house, he was head surgeon of the French, Columbus and Broad Street Hospitals.  Nationally-recognized, he wrote technical articles in periodicals like The Literary Digest, the Monthly Cyclopedia and Medical Bulletin, and The American Journal of Surgery. He co-founded the Spanish-American Medical Society in New York, and served as its president.

The couple's unmarried daughter, Maria, was still living with her parents as late as 1934 when she was listed as a member of the Association of Private School Teachers.

After being retired for several years, Crispin moved to Boonton, New Jersey around 1939.  The house was sold and in February 1940 a conversion to apartments--two per floor--was completed.  Other than removing the stoop and moving the entrance to the basement level, the renovations left the facade mostly untouched.

Other than the expected updates, like replacement windows, the Hirsch house looks little different than it did in February 1940 when the stoop was taken away.  Its one-time twin at No. 25 East 94th Street has been radically altered; leaving No. 15 to display Cleverdon & Putzel's surprising and engaging blend of two totally unrelated historical styles.