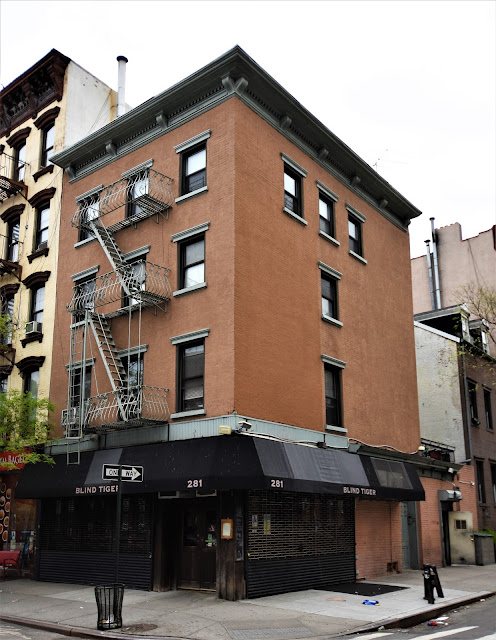 John Brower worked as an "assessor" for the City of New York in the 1820s.   When the "Walks in Columbia Street from Grand to Stanton Street" were paved in 1825, Brower worked with James Bleecker to do the assessment.  It was a somewhat ironic teaming, for four year later Herring Street, on which Brower's former house stood, would be renamed in honor of Bleecker's father, Abraham Lispenard Bleecker.

Brower had owned the land at the southeast corner of Herring and Jones Streets since 1794; but it was not until around 1813 that he erected the house there.  The Federal-style residence foretold of the major change coming to sleepy Greenwich Village.  Three and a half stories high, it was a commodious 25-feet wide and stretched back 75 feet along Jones Street.  Dormers would have punched through the attic roof.

Brower's social and political importance was reflected in his 1841 appointment by the governor as a Vice Chancellor of the New York Court of Chancery, the second-highest position in that court system.  But by then he had not owned the Bleecker Street house for nearly 25 years.  In 1817 he transferred it to his sister and brother-in-law, Diana and Peter Walker.

The Walkers sold the property in 1825 to Charles Miller, apparently a "ship carpenter."  During his family's 55-year ownership, the house would see significant change.

In 1820 Arthur H. Rogers had opened a drug store at No. 193 Spring Street.  In 1832 Miller converted to ground floor of No. 281 Bleecker Street for Rogers's second store.  As he took his sons into the business, the name became A. Rogers' Sons.  The pharmacy would be a Bleecker Street fixture for decades.

The street level seems to have accommodated not only the drugstore, but a small grocery.  In 1837 James P. Horton's grocery was here.  By 1841 directories listed Henry Klennen's grocery here; and from 1846 through 1849 it was home to Henry Vanaxte's grocery.  He lived in rooms above the store.

Charles Miller operated the upper floors as a boarding house.  In July 1865 he offered "A nice parlor to let--For a gentleman and wife, with or without board; also a second floor Front Room.  Terms moderate."  The following year in May an advertisement in the New York Herald read "A very pleasant front parlor, furnished, $8 per week; also Hall Room, $10 per month; for gentlemen only."

The $8 per week rent would translate to just under $125 today.  The restriction "for gentlemen only" prevented the possible invasion of women of ill-repute and subsequent problems.

A. Rogers' Sons, like almost all drugstores, were "chemists" as well; mixing and creating medications.  Rogers' best-known remedy, perhaps, was its Citrate Magnesia, advertised for years in popular magazines.  An ad in Puck magazine in 1880 described it as "An agreeable Aperient and Refrigerant.  This well known preparation is highly recommended for Dyspepsia, Headache, Sickness of the Stomach, and all complaints arising from Acidity, Biliousness, and Malarial Fevers.  It cools the blood and regulates the bowels.  It is a favorite medicine for children."


In 1880 brothers Arthur and Edward H. Rogers purchased the Bleecker Street building from Charles Miller.  Edward, by now, had his reputation restored.  Years earlier, in 1868, he and his brother, were working alone in his father's Spring Street drugstore when a servant girl entered, requesting "salts and senna" for her employer, James Hamilton.  Edward mistakenly handed her oxalic acid.  Hamilton died soon after.

After the arrests of both Edward and his father and a well-publicized trial, the young druggist was acquitted in what was popularly called The Hamilton Poisoning Case.

The brothers would not retain ownership of No. 281 Bleecker Street for very long.  In 1885 Arthur joined his other brother, James, in establishing the A. H. Rogers & Co. in Genesco, New York.  He and Edward transferred title to the Bleecker Street property to Emily Rogers in 1883.  By the time she sold it to Hugh Slevin in 1890, the drugstore was gone.

Slevin made significant alterations to the building.  He raised the attic to a full fourth floor, topped with an attractive bracketed cornice.  Matching sills and lintels were placed over all the openings.

Slevin leased the former drugstore to Emil Mesnier, a real estate investor himself and the owner of two saloons--one at No. 339 Eighth Avenue and the other at No. 840 Broadway.  Soon Mesnier owned three saloons.

The proprietorship of the new saloon changed hands repeatedly.  In 1892 Mesnier sold his saloon to John Martin for $8,500 (more than a quarter of a million dollars today); and in 1894 Martin leased it to Anton Schwartz and brothers Max E. and Simon Bernheimer, owners of the Bernheimer & Schwartz brewery.  It was common practice for breweries to operate their own saloons, thereby restricting sales to only their own products.  The Bernheimer & Schwartz saloon would remain until 1908.

A saloon, operated by string of proprietors, would remain here until 1920, the year Prohibition came into effect.  At that time it was run by Joseph Gertner.  In its place David Reichenberg opened a grocery store.

Meanwhile, the upper floors were rented to residents of modest means.  One of them, Robert Kirchner, was 19 years old in 1903 when he was fired as a driver for Z. Piercy, an "expressman" with stables at No. 213 Thompson Street.  The term "expressman" meant that Piercy ran a cartage, or delivery, business.

The disgruntled teen hatched a scheme with another driver, 24-year old Henry Rose.  Among Piercy's regular clients was the wholesale drug firm of Lehn & Fink, on William Street.  When its management began complaining that several packages were not reaching their customers undercover detectives put a tail on Piercy's drivers.

Rose and Kirchner had been careful not to steal packages from Rose's shipments; taking them instead from other wagons.  They did not expect, therefore, to be followed.  But on a Saturday night in June, as they were handing over a box of drugs in E. Hoenig's Carmine Street drugstore, the detectives rushed in.   All three were arrested, Rose and Kirchner for larceny, and Hoenig for receiving stolen goods.

Decades later another resident was being watched; but for far different reasons.  Andrew A. Genovese, who lived here at least from 1936 to 1940, was annually listed on the Government's roster of Communist Party voters.

At the time there was a bakery in the Bleecker Street store.  Then the space became home to Ottomanelli's Meat Market in 1957.  Like A. Rogers' Sons drugstore, it became a destination for decades.  Greenwich Villagers may have been shocked to see the shop close after 32 years, in 1989.  They breathed a sigh of relief when the venerable butcher shop reopened two doors away at No. 285 Bleecker Street a week later.

Today the space that had been a saloon for the 30 years prior to Prohibition is once again a bar, the Blind Tiger.  John Brower's two-century-old building has been owned by the Mongioi family since 1923.