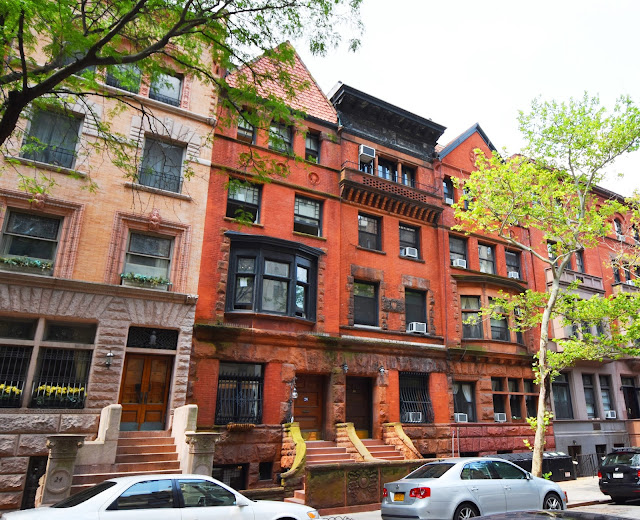 Lamb & Rich produced three delightful Queen Anne style homes which they splashed with touches of Renaissance Revival.  The A-B-A plan, along with the balanced openings and decorative elements flew in the face of the asymmetry expected in the Queen Anne style.  The balance was, however, thrown off with the paired stoops of Nos. 26 and 28 that left the entrance to No. 30 sitting alone.

The architects provided subtle differences between the two end homes.  The second floor cornices were slightly different—one bracketed, the other not.  The projecting bay of No. 26 was clad in metal; that of No. 30 was faced in brownstone.  Fishscale tiles covered the gable at No. 26, while No. 30’s was clad in brick. 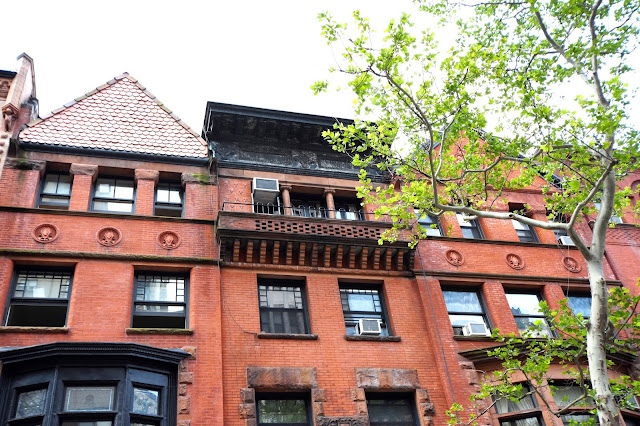 In the middle, No. 28 featured blocky brownstone quoins and lintels around the second floor openings.  At the fourth floor an enchanting brick balcony serviced a columned loggia.  The trio fully represented the edgy domestic architecture appearing on the west side of Central Park.

As the houses were being erected, Lamb & Rich were designing the residence of the widow Elizabeth Milbank, next door at No. 24.   Two party wall agreements dated May 5 suggest that Hugh Lamb would own No. 26 while J. H. Andrew would take possession of No, 26.  The agreements were between Hugh Lamb and Elizabeth Milbank for Nos. 24 and 26; and between Lamb and Harriet N. Andrew for Nos. 26 and 28.  Hugh Lamb was arguably nearly as active in real estate dealings as he was in architecture.

The row was completed in 1888 and all three homes would see a variety of residents and sometimes a rapid turnover of owners.

No. 26 became home to Arthur Wellesley Watson and his wife, Anna Josephine.  The wealthy Watson was a partner in the importing firm of Passavant & Co. located at No, 320 Church Street.  The couple had three daughters and attended the nearby St. Agnes’s Chapel on West 91st Street.

In 1894 Governor Roswell P. Flower found himself in the center of a political scandal when he refused to appoint a special Deputy Attorney General to investigate corruption in the office of District Attorney of New York County, John R. Fellows.  The specific purpose of the appointment would be, according to The New York Times, “to prosecute alleged crimes in this city.”  His hard-line stance put the Governor in the midst of a political maelstrom that threatened to unseat him.

A grand jury was chosen to investigate “the failure of Governor Flower to appoint a Deputy Attorney General to prosecute election law violators and corrupt officials.”  Sitting on that grand jury was Arthur W. Watson.

Watson added to his prestige when he was elected to the board of directors of the Colonial Bank at 83rd Street and Columbus Avenue in 1898.   But the Watson social hob-nobbing was best illustrated by a special cable to The New York Times on July 5, 1902 from London.  It reported on the American Ambassador’s Independence Day reception at Carlton House Terrace the day before.  Among the exulted guests that afternoon were the Duchess of Marlborough, Mr. and Mrs. Bradley Martin, Sir Gilbert and Lady Parker, Count Ward, the Marquise Vistabella, and Arthur and Anna Watson.

In the meantime, No. 28 next door had been lost in foreclosure in 1895.  Henry W. Kennedy purchased it for $27,000.  No. 30 saw a rapid turnover of residents beginning at the turn of the century.  Mrs. S. H. Hanford was hosting teas and receptions in 1900; but within a year it was home to Dr. Isaac Hull Platt.

A specialist in pulmonary disease, Platt was the grandnephew of Commodore Isaac Hull who had commanded the frigate U.S.S. Constitution.  An expert on Walt Whitman, he published a biography of the poet.  His interest in the arts was reflected in his club memberships—the Players, the National Arts Club of New York and the Arts Club of Philadelphia.  His stay in No. 30 would be short-lived.  In 1902 he moved to his estate in Wallingford, Pennsylvania, “Runnemede.”

On September 11, 1912 Anna Josephine Watson died in No. 26 West 71st Street at the age of 57.  Her funeral was held on Friday the 13th at St. Agnes’s Chapel where she had been a member for 20 years.  A private train car carried mourners from Grand Central Depot to the burial at Kensico Cemetery.

Arthur Watson remained in the house for nine years, selling it to Grace Jaques in September 1921.  He moved to the opposite side of Central Park where he died in his home at No. 108 East 73rd Street on July 9, 1929.
The same year that Grace Jaques purchased No. 26; the house next door was sold.  Her new neighbor at No. 28 West 71st Street found himself in serious trouble in 1928.  James Coffield was driving along West 29th Street on the night of January 27.  Six-year old James Parsons lived at No. 529 West 29th Street and was playing in front of his house.    The little boy obviously did not see Parsons’ automobile, nor did Parsons see the child.  Coffield hit James Parsons, who died shortly after being taken to Bellevue Hospital.  Parsons was held “on a technical charge of homicide.”

Coffield’s mother, Ellen, lived in the house as well.  She died suddenly here on April 20, 1932 and her funeral was held in the house the following Tuesday.

By now the 71st Street block was seeing change.  The Depression was not kind to the large private residences which required domestic staffs and expensive upkeep.  No. 30 had been home for several years to James Frederick Andrews.  The wealthy widow had taken up the obligations normally reserved for a socialite—such as the reception he gave on January 23, 1914 to introduce his daughter, Doris, to society.   The retired stockbroker did admirably, assisted by his daughter’s aunt, Mrs. Cornelius Poillon.

“After the reception a dinner and theatre party was given for the receiving party, to which a number of men were asked” reported The New York Times.

Less than three months later Andrews would be dead.  Following an appendicitis operation at the Polyclinic Hospital, the 68-year old died on February 11, 1915.  Five months later the house was leased by the estate.

The end of the line had come for the three Queen Anne homes.  The Andrews house became “apartments and furnished rooms” by the time of Ellen Coffield’s death.   Four weeks before that tragedy would befall No. 30, also now a rooming house.

The 81-year old Dr. Stephen Smith Burt, a Professor Emeritus of Medicine and Physical Diagnosis at the Post-Graduate Medical School and Hospital, had been living in a furnished room in No. 30 for some time.  In 1930 he had become paralyzed on one side and was unable to move without help.

Dr. Burt had never married.  His 1899 Recollections and Reflections of a Quarter of a Century detailed his years of teaching at Cornell and the College of Physicians and Surgeons.  His family’s deep roots in America were reflected in his memberships in the Society of Colonial Wars, Sons of the Revolution, and the Huguenot Society.

The New York Times noted on March 28, 1932 “It was customary for those who looked after him to carry him from the bed in his furnished room at 30 West Seventy-first Street to a favorite armchair by the window, where he was in the habit of sitting and smoking.”

On Saturday afternoon, March 26, the invalid doctor was doing just that.  But as he attempted to light a cigar, the match fell from his shaky grasp and ignited his robe and pajamas.   Unable to extinguish the flames, the terrified old man must have watched them spread.

At some point neighbors noticed smoke swirling from the open window and notified the housekeeper.  She rushed to the room and found him unconscious and badly burned.  An ambulance took him to Roosevelt Hospital where he died soon afterward.  Doctors attributed his death to shock.

That same year No. 26 was home to blue collars residents like Louis Jackson who earned his living as a “feeder” in the printing plant of Branwell Company, Inc. at No. 406 West 31st Street.  Norman Fenster, a casting director, lived here by 1944 when he was in charge of casting and direction of Paul Vincent Carroll’s Shadow and Substance produced by the Actors Equity Association.

Also renting an apartment in No. 26 was Russian-born American citizen Brocha Ivova.  In 1945 the United States initiated the military occupation of a defeated Japan.  Brocha was a civilian employee of the War Department and she was moved to Tokyo for her job.  She retained her apartment on West 71st Street while she was abroad.

On the evening of June 8, 1947 friends reported Brocha missing.  Early the next morning her body was found beside a road about six miles outside of Tokyo.  Early reports said there were two bullet holes in the young woman’s head.  The Associated Press reported “American Criminal Investigation Division agents began an immediate search for ‘the possible murderer or murderers.”

Newspaper readers were shocked when, a week later, the AP reported “Army Criminal Investigation Division officials said today that Miss Brocha Ivova had been slugged to death with a blunt instrument and that her murderer or murderers might have been soldiers.”

The report added “that a jeep containing occupants who appeared to be soldiers had been seen hastily leaving the spot where the body was found.  The motive for the crime continued to baffle Army agents and Japanese police.  The woman’s jewels and purse were untouched.”

Change in Manhattan is inevitable; and so it was for the three humiliated houses on West 71st Street.  No. 26 was returned to a single-family home in 1977 and received a subsequent restoration-renovation in 2011.  After having been converted to two apartments per floor in 1949, No. 28 was likewise restored to a single-family dwelling in 1995.  Only No. 30, which has sadly lost its stoop, continues its multi-family use with three and four apartments per floor.

The charming brick-and-brownstone homes survive as reminders of the development of the Upper West Side when well-to-do families moved into upscale homes that defied architectural convention.

photographs by the author
Posted by Tom Miller at 4:07 AM