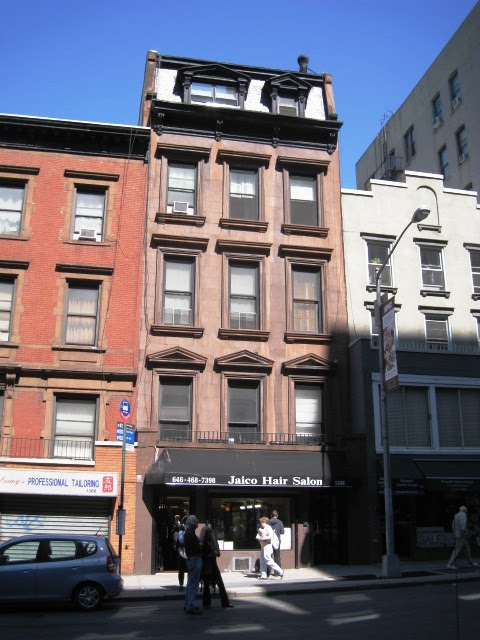 In 1879 Ashbel and Elizabeth Cross Fitch moved into the new house at No. 1376 Lexington Avenue with their three children.  Little Bessie was four, Ashbel Jr. was two, and Ella was just a year old.  The couple had been married five years.

The impressive brownstone-fronted house was three stories high above an especially deep English basement.  The regulated symmetry of the design was upset by the unusual dormers that punched through the steep mansard—one being twice the width of the other.  A high stoop led to the centered entrance on the parlor floor.

Ashbel Fitch leased the impressive home from wealthy brewer George Ehret.  Lexington Avenue had been extended this far north only nine years earlier and other impressive residences were still appearing along the thoroughfare.

The 30-year old Ashbel Parmelee Fitch had received “his rudimentary education…in the common schools here,” said The New York Times in 1899.  But he then studied in Europe, at the Universities of Berlin and Jena.  Five years after moving into the Lexington Avenue home he essentially gave up his legal career to turn to politics.  (In the meantime two more children were born in the house—Morton in 1881 and Littleton two years later.)

In 1883 Fitch purchased the house from Ehret for $23,000.  The brewer had not only been Fitch’s landlord, but one of his most important legal clients.  Fitch paid him $5,000 in cash, and then essentially traded legal work over a period of four years to pay off the debt.

Highly ethical and adamant about the human rights of the working class, Fitch declined the Republican nomination for Congress in 1884 “on the ground the he was not in sympathy with the high protection doctrines of the Republican Party,” according to The Times.   In 1886 he was elected to the House of Representatives.

On February 8, 1887 Fitch’s father, Edward, died suddenly at the age of 66.  He had been one of the founders of the New York State Republican Party and the first New York Republican in the Legislature.  Since 1869 he had been a partner in son’s law firm.    His funeral was held in the Lexington Avenue house on February 10.

That same year another child was born in the Fitch house—daughter Doris.  Elizabeth, called Lizzie by her friends, had a staff of servants.  None was as important as Lizzie Petrie, the children’s nurse.  She was hired in 1876 and lived with the Fitches for years, becoming a de facto family member.

In 1888 the address of the home was changed to 1388 Lexington Avenue.  According to David F. Remington in his Ashbel P. Fitch: Champion of Old New York, “Fitch was not please when the address changed because 1376 held two ‘13’s,’ his lucky number.”

Fitch’s popularity among the people was evidenced on September 30, 1889.  As the family prepared to leave for abroad, citizens bid an impressive farewell.  The following day The New York Times reported “The Old Homestead Club and about three thousand citizens of Yorkville and Harlem assembled in front of the residence of Congressman Ashbel P. Fitch, 1,388 Lexington-avenue, last evening, headed by Leibold’s Band and gave him a serenade on the eve of his departure for Europe.”

Fitch was called back to New York from Washington in September 1893 on reports that his 72-year old mother was ill.  Fanny Fitch, like her husband and son, had led an impressive life.   During the Civil War she had been active in the formation of the Sanitary Commission which, according to The Times, “did so much good work for soldiers.”  She remained active in the Commission throughout the war.  Afterward she turned her focus to charitable organizations like the Orphan Home and the Magdalen Asylum.

By the time Fitch returned, Fanny’s condition had deteriorated.  She had contracted pneumonia and two weeks later on September 22, she died.  Her funeral, like that of her husband, took place in the Lexington Avenue house.

By 1895 the Fitches’ two eldest children, “Miss Bessie C. and Mr. Ashbel P. Jr.” were old enough to appear in The Social Register along with their parents.  But the following year the publication would have to update the addresses.  In the fall of 1895 Fitch sold the house to Josephine Schmidt, who had inherited about $1 million when her beer brewer husband, August Schmid, died.

If Josephine, disparagingly called “the brewer’s wife,” by New York society, intended to live in the house, she changed her mind.  On March 14, 1896 the Real Estate Record and Builders’ Guide reported that “Under-Sheriff Henry H. Sherman has bought of Josephine Schmid the four-story stone front dwelling.”  In reporting the sale, the newspaper noted that Fitch had sold it “for a consideration of $27,000 in a trade for a larger residence in East 80th Street.”

Henry H. Sherman was making $5,000 in his city job at the time.   A comfortable salary equal to about $145,000 today, it afforded his wife to enjoy the life of a Manhattan socialite.  She was a strong supporter of the Museum of Fine Arts in Boston and donated several important works over the years.

By 1908 No. 1388 Lexington Avenue had become home to Dr Frederick Charles Heckel.   Aside from his medical practice, Heckel was Vice President and Director of the Crystal Chemical Company.  Although the well-established physician would remain in the house at least through 1922, by 1921 he was renting rooms.  On May 3, 1921 an advertisement appeared in the New-York Tribune offering “Large front room; also one with two beds; running water.”

Despite the changes, when the Willis Gemmell Mitchell family moved in by 1931, life in the house became upscale once again.  The Mitchell’s summer house was in Ossining, New York and they owned a “summer camp” on Lake George.

The society pages routinely reported on the entertainments given by Mrs. Mitchell: a “small dinner” at the house in March 1931; another dinner “for her daughters, the Misses Helen Annette and Betsy Mitchell” in July that year; and a luncheon at the Pierre “for Dame Rachel Crowdy of England, Chief of the Social Section of the League of Nations,” for instance.

On September 20, 1931 The New York Times updated its readers on Mrs. Mitchell’s movements, saying she “has left her summer camp on Lake George and is at 1,388 Lexington Avenue for the Autumn and Winter.”

Eventually dinner parties and receptions in the old house would come to an end.  Before the middle of the century it had been converted to apartments—two per floor--with a store on the ground level.   From at least 1958 through 1972 poet Marie B. Jaffe lived here.

Despite the abuse at street level, Ashbel Fitch’s brownstone home is still recognizable.  Inside a remarkable amount of original elements survive.  But few passersby notice one of the first residences in the developing neighborhood and the home of a popular Congressman.

non-credited photographs by the author
Posted by Tom Miller at 3:03 AM