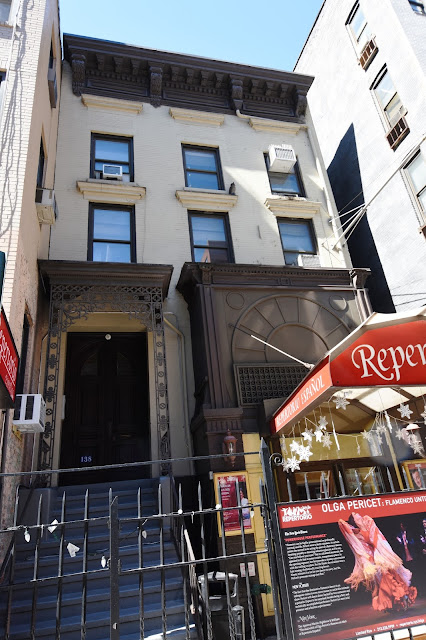 But now the parlor and basement levels had been converted to commerce as the garment district engulfed the neighborhood.  Oddly enough, while a vast protruding shop window had been installed above the ground floor, the stoop, porch and original doors survived.

A coat manufacturer operated out of the lower level and on October 18, 1886 it advertised “Operators wanted on linen and alpaca coats; work given out to good hands.  Ring basement bell.”   The mention of “work given out” referred to the practice of allowing women to work on garments at home, earning money by the piece.

In the meantime, the rooms were rented out upstairs.   Here on Sunday, January 27, 1889 the unmarried Faith Lomvise Kerr died.

Soon the First Swedish Baptist Church purchased the house.  Founded in 1867, it had conducted services at the Mariners’ Temple Baptist Church until now.   The ground floor was converted to a church (of sorts) while the pastor, The Rev. Andrew P. Ekman, lived on one floor; the sexton, Joel Vichman, lived on another; and the parlor shop-level became the home and business for Anna Baker, a dressmaker.

Trouble came in 1895 when Charles Simon attempted to open his saloon at No. 98 Lexington Avenue.  The New York Times, on August 21, reported “The pastor and Trustees of the Swedish Baptist Church are anxious that he shall do nothing of the kind, as they say there are already too many saloons in the neighborhood.”

The church opposed Simon’s application for a liquor license, saying that his saloon would be within 200 feet of their church, in violation of liquor laws.  When his license was refused, Simons went to court.  His argument was, according to The Times, “The building in which the Swedish Baptist Church is worshiping was originally a private residence.  The ground floor was remodeled for church purpose, and the upper floors are let out as flats.”

Amasa Thornton, the attorney for Simon, did not contest that the saloon was within 200 feet of the building.  “We do say, however, that this case does not come under the statute, as the building is not used exclusively for church purposes.  Surely if they let out part of their place for a dressmaking establishment, the objection to our license fails.”

Anna Baker became a victim of the legal squabble.

When the church’s attorney, Julius Mayer, countered in court that there was no dressmaking establishment in the building, Thornton replied, “No, there is not.  After we began these proceedings they made the poor woman get out.  On the very day we served notice of this order, she was served with notice to quit.”

Thornton was unmoved.  “Perhaps, but a very peculiar coincidence.  But, aside from that, the place is a sort of boarding house.”

Not long afterward the First Swedish Baptist Church moved to No. 141 East 55th Street and the 27th Street house was taken over by the Greek Holy Trinity Church.  But that arrangement, too, would not last.  In March 1904 the church purchased property on 72nd Street between Third and Lexington Avenues.

The Knights of Columbus used the house as a headquarters, calling it the Alcazar, for a few years.  On July 21, 1905 a meeting was held here “for the purpose of perfecting arrangements for the erection of a Roman Catholic Chapel on Blackwell’s Island,” as reported in the Real Estate Record & Builders’ Guide.

In the spring of 1907 the house saw a rapid turnover of owners.  On May 5 The New York Times reported that real estate agent R. Wilmarth Appleton had not only sold, but resold the building.  In reporting on the sales it mentioned “The building is now occupied by the Knights of Columbus.”

The group that met here was a specialized faction called the “Order of Alhambra.”  In 1908 The Catholic Fortnightly Review wrote that the order, “as our readers are probably aware, is a secret society within a secret society, its membership being restricted to ‘Knights of Columbus.’”

Once a year the group made a “pilgrimage to the shrine of Mecca” (the Yorkville Casino on 86th Street between Second and Third Avenues).  On November 16 it met at the Alcazar to complete arrangements.  The Catholic Fortnightly Review reported on the meeting in florid, tongue-in-cheek prose:

“There was a large and imposing gathering of ‘Nobles,’ and the pedigrees of the neophytes were handed in and the mettle of which they are made was discussed, for only those who have proven their ability to sustain the fatigues of a day of battle can travel over the burning sands toward those sunny lands where sweet aromas scent the air, and the sight of roses always in bloom rises the spirits of the traveler to that seventh heaven promised by the prophet to each one of his faithful followers who will make this pilgrimage.”

Following the meeting was a “feast of fun.”  The Review noted, “No doubt all this is excruciatingly funny to the average ‘Knight of Columbus’ and agrees perfectly with his exalted notions of ‘true knighthood;’ but cautioned “Old-fashioned Catholics, however, are inclined to view such antics with a degree of scandal and alarm.”

In 1912 the house was home to an even more peculiar group.  The New York State Association of Spiritualists used it as the New York City “spirit temple.”  In March that year it was the scene of the Spiritualists’ Convention.  Hank R. Savage, uncle of renowned spiritualist Floy Cottrell, was president of the State Association.  On March 8 he told the convention of events that had occurred in Cotrell’s home.

The Sun reported that “once he made a sewing table in Miss Floy’s home on a farm twelve miles south of Buffalo go across the room, slip two of its feet into Miss Floy’s Uncle Hank’s rubbers and then go out through the sitting room to the kitchen and climb into the sink.”

The days of psychics and rappings and tappings in the building came to an end in October 1914 when its owner, Max Goebel, leased the to the Bromhall Players of Stanford, Connecticut.  The Times reported that “Benjamin B[utler]. Davenport, who is the leading factor of the Bromhall Players which is a theatrical and musical organization, intends to remodel this building by putting in balconies, club rooms, reception rooms, &c.  The lease is for ten years.”

The Players intended to have the remodeled building ready by Thanksgiving.  But that was not to be.  The renovations were not complete until spring, but were worth the wait.  On March 27, 1915 The New York Times reported on the outcome.

Calling it “Manhattan’s tiniest theatre,” the newspaper announced “What was the first two floors has been converted into an attractive little lobby and auditorium.  The lobby is not much larger than that of a private house, and its capsule box office is just about big enough to hold the receipts for a capacity audience if every one pays in bills.”

The gray-and-gold auditorium with its small balcony was capable of holding 225 people, and the stage was of normal size.   “A novel indirect lighting scheme has been adopted, the illumination coming through many French windows down either side of the room.”  The upper floors had been transformed into dressing rooms and offices.

Eventually Davenport staged productions by other playwrights—Moliere, Maugham, Galsworthy and Racine, for example.   The successful venture was such that before the lease was up the Bramhall Players purchased No. 138 East 27th Street.  In July 1920 it added to its holdings by purchasing the three story house next door at No. 140.

Davenport leased the auditorium, as well, to small theatrical groups.  In March of 1921 The Hungarian Players Society gave a five-night performance, and in May that year The Stockbridge Stocks produced a three-act drama Jezebel here.  The New-York Tribune pointed out that the company “began operations on the roof of a New York house last summer.”

In February 1931, as the Depression raged, the bank foreclosed on the building.  Butler Davenport, refusing to lose his theater, appealed to the public for donations to prevent the closing of what was now known as the People’s Playhouse.  When the property came up for auction on February 27, Davenport was successful in re-purchasing the building.

With audiences unwilling or unable to afford the luxury of a night at the theater, Davenport stopped charging admission.  In 1939 the Federal Writers’ Project’s New York City Guide wrote “General admission is free, and only the few reserved seats are paid for.”

Davenport would later say “I have dedicated my life to spreading the idea that nobody should pay for theatre admissions.  We have free schools, free art museums, free symphony concerts and libraries.  Why not theatres?”

Four years later on October 6, 1943, Sam Zolotow, theater critic for The Times, remarked “Year in and year out the venerable Davenport Free Theatre operates at 138 East Twenty-seventh Street, with the indefatigable Butler Davenport in charge of every department from the front of the house to backstage, and oftentimes doing most of the work himself.”

The relentless actor, playwright, and producer appeared in a solo performance here in March 1955.  The production was entitled An Evening With Davenport.”

Davenport lived in an apartment on an upper floor of the building.   He died at the age of 86 in 1958.

The following season, beginning in March, the theater was leased to Harvey Cort, who had been with the Columbia Broadcasting System.  “Mr. Cort’s first bill there will be a revival of ‘The Innocents,’ which he will stage with Peggy Feury in the leading role,” announced The Times on March 19, 1959.

Called the Gramercy Arts Theatre in 1972, it became home to Repertorio Espanol.  The company offered a venue for Hispanic actors and filled a needed void for Spanish-language audiences.   Repertorio Espanol continues here today. 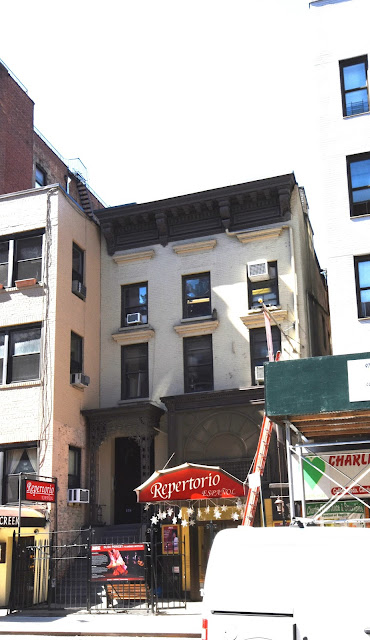 Through its widely-varied history, No. 138 East 27th Street astonishingly retained its original doorway and its marvelous cast iron porch.  Despite the many alterations, its layers of use—private home, church, dressmaker shop, and theater—comfortably coexist and testify to the building’s rich history.