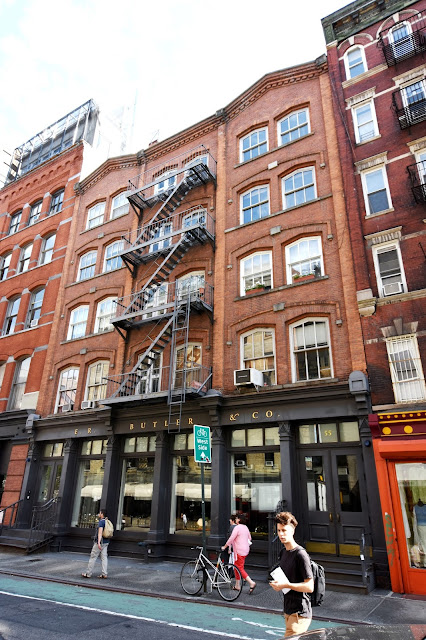 Before John C. Moore retired in 1851 he entered into an exclusive agreement with another high-end retail jeweler—Tiffany & Co.   All the Moore designs and silverware were now made for Tiffany & Co. only.

Edward C. Moore took over the reins of the family business.  He was much more than a businessman or artisan; he had uncanny foresight and a brilliant design sense.  The Illustrated American would later say that he “was easily the foremost silversmith in the United States.  It is largely due to his skill and industry that American silverware has reached a degree of perfection that makes it celebrated all over the world.”

In 1856 William M. Crittenton was “carrying on the manufacture of wines, cordials, &c., at No. 55 Prince-street,” according to court papers on August 11.  But both Crittenton’s business and the old building would soon be gone.  In 1864 Edward Moore replaced it with a handsome factory building for his silver operation.

A cast iron base supported four floors of brown brick that could as easily pass for a school.  In what might be called “industrial Gothic,” the upper openings were given slightly-pointed arches and were gathered in pairs by brick drip moldings. 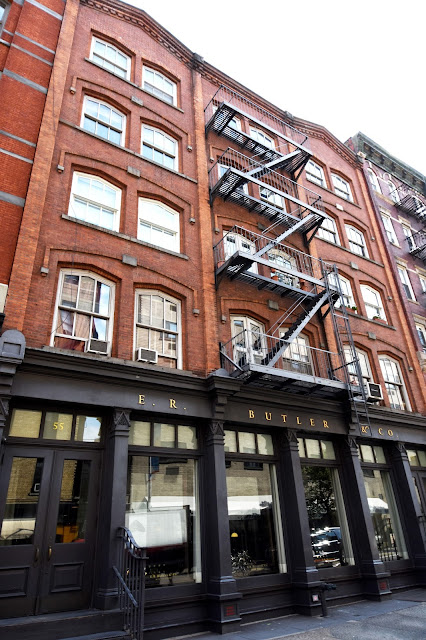 Moore’s “plant” was not merely a production facility.  He established a school here.  Looking back on August 29, 1891, The Illustrated American remembered “Early in the sixties Mr. Moore saw the need of better artistic instructions and, realizing the meager facilities offered in this city, more particularly in the decorative and industrial arts, he set to work to establish a system of instruction and training in his Prince Street works that soon developed into the most thorough and complete school of its kind in existence.”

Edward C. Moore’s silver was the face of Tiffany & Co.  His brilliant and innovative designs were never attributed by the public to him; but always to the retailer.  His fascination with ancient glass and bronze, as well as Asian art, led to full lines of Tiffany & Co. items inspired by Moorish, Japanese, Roman and other such relics.

In 1867 Moore received a gold medal for his exhibit of silverware at the Paris Exhibition.  The following year Tiffany & Co. was incorporated by the State of New York and it purchased Moore’s entire operation.  Moore was made an officer of the new corporation and remained the leading force in the silver making department.  In a shrewd move, he retained possession of his Prince Street building, leasing it to Tiffany & Co. for $6,000 per year—a satisfying $93,000 today.

He traveled extensively now, visiting the exotic locations that inspired him, and studying local technical schools in Paris.   His students were directed towards natural objects—leaves, insects, and flowers, for instance—in their decoration of silver and bronze.  “Constantly seeking to improve on old methods, silversmithing and metal-working were raised by him to such a standard that they graded insensibly into the fine arts,” said The Illustrated American.
As Moore traveled, he collected items to be used for inspiration at home.  His home on Madison Avenue, “the old Stebbins mansion,” as described by The Collector on May 1, 1892, included a sky-lit gallery where between 1,600 and 1,700 pieces were displayed.

“There are in the collection specimens of antique Roman, Cyprian, Etruscan, Merovingian, Venetian, Persian and Arab.  German and Spanish glass; Chinese and Japanese pottery; Hispano-Moresque, Rhodian, Damascus and Persian pottery, Corean porcelain; Chinese glass jades and crystals; an unusual collection, both in number and quality, of Tanagra figurines; Saracenic metal work of the twelfth and thirteenth centuries; Persian, Turkish, Cashmere and Indian metal; Japanese and Chinese bronzes, swords and sword guards; inros and netsuykis wood and ivory carvings, lacquers and Japanese basket work.’  And the list went on.  And on.

In the Prince Street Plant, as it was called, Moore’s innovative designs came to life.  “The Persian, North of India, and Oriental schools contributed to his knowledge,” remarked The Illustrated American, “but his originality was shown by the fact that his observations and constant studies and researches were ever creating and developing something peculiarly his own.  A notable instance was his famous ‘hammered silverware,’ first exhibited by the Tiffanys at the Paris Exposition of 1878.”

These items, purely Moore’s creations but attributed to Tiffany & Co., introduced the ground-breaking concept of mounting insects, birds, fish, and foliage of a contrasting metal—gold or copper, for instance—onto the sterling surfaces.

Moore’s anonymity was not purely due to Tiffany & Co.’s desire to hog the spotlight.  Modest and retiring, he was “almost morbidly averse to publicity of any kind” and “passed through life without assuming in the eyes of the general public the credit he so well deserved,” according to The Illustrated American.

In the meantime, the Prince Street Plant employed hundreds of artisans who produced an astonishing volume of housewares for Tiffany & Co. store, then located on Union Square.  In April 1877 Tiffany & Co. announced in The Sun that its stock “of sterling silverware is the largest in the United States.  They are constantly producing at their Prince street City Works a class of finer goods, representing many methods of ornamentation practiced exclusively by them.  Their stock of family silver and articles for Wedding Presents, at Popular Prices, is the most attractive they have ever shown.”

The high quality of Tiffany silver required the best-trained artisans.  When the firm advertised on December 27, 1880 for a melter, “one with practical experience with silver and gold,” it warned the applicants not to show up without solid references.  “Apply with testimonials.”

By 1887 Tiffany & Co. had two other manufacturing plants—one in Brooklyn and another in Newark.  That year the Prince Street facility faced problems.  On April 21 the Knights of Labor ordered a walk-out of silversmiths city-wide.  The New-York Tribune reported the following day “what looks like a long fight between the silver manufacturers and their employes has begun.”

The Prince Street plant employed about 300 silver workers, “but barely 100 of them were in their places when time was called at 7 a.m.,” reported the Tribune.

Edward C. Moore spoke to a reporter from The Sun, lamenting that the union had brought his operation to a standstill.  “We have about 100 men left in our manufactory in Prince street, but really they have taken out every man who manufactures our goods; that is, goods that we sell over our counters.  They left us pattern workers, designers, and men of that character.  I must say that these walking delegates and agitators are very shrewd, and the manufacturers have much to learn from them.”

Nevertheless, neither Tiffany management nor Edward Moore intended to cave in to the unions.  Moore was firm in saying “We have been pestered and annoyed beyond reason by the leaders of the workingmen.  We’ll have no more of it.  We are ready to meet any of our men who are disposed to return to work.  They can return by complying with our demand of withdrawing from the organization.”

Edward C. Moore was titled Chevalier and decorated with the Legion of Honor at the Paris Exposition of 1889.   Although virtually unknown to the public, he was highly regarded within the industry as a genius and pioneer.  “Etching on metals was another distinct branch of the industry which Mr. Moore has developed, until to-day it is gradually supplanting engraving,” mentioned The Illustrated American.

He died in 1891 having created the personality of Tiffany & Co. silverware.  His good friend, S. P Avery said, “the world will never fully know the loss it met with in the death of Mr. Moore, and what he did for the industrial arts will never be wholly told.”

On February 26 that year Burgen left work as usual.  He never returned.  Family members did not notify police because they believed “that he would turn up all right.”   It was not until a body was pulled from the East River on the night of March 6 that Burgen’s cousin, Frank Burgen, arrived at the morgue to investigate.  He had two theories concerning his cousin’s disappearance.

“He had been expecting some money from his father who lives in Alsace, and because it did not arrive he was feeling despondent.  It may be, however, that he got the money on the day when he was last seen by me, and has met with foul play.”

The Evening World described Burgen as “about 5 feet 7 inches tall, had dark brown hair and moustache and incipient goatee, but no beard. His nose is described as ‘stub.’  He wore dark clothing.”

After the badly decomposed corpse had been studied by Frank Burgen for some time, it was of little help.  “It may be the one I’m looking for, although the features are too much obliterated to be recognizable,” he said.

The extremely high regard for Tiffany & Co.’s quality and innovation was exemplified in 1896 when Cardinal Francesco Satolli, the first Apostolic delegate to the United States visited New York.  On October 14 Archbishop Michael Corrigan escorted the former Papal Delegate on a sightseeing trip around Manhattan, which included impressive stops like the American Institute Fair at Madison Square Garden.  But, according to The Sun, their first visit was to “Tiffany’s factory.”

Within the year Tiffany & Co.’s astounding success and resultant increased business were making the Prince Street plant insufficient.  On December 1 1897 the firm announced in The Sun “Having outgrown our manufacturing facilities both at our Prince Street works and in our Leather goods shop in Union Square, we have erected a new building at Forest Hill, Newark, N.J., with sufficient capacity to embrace both.”

Before Tiffany & Co. gave up its old factory, it set to work reclaiming the precious metals that had found their way into the floorboards over the decades.   The boards were pulled up, burned, and the molten silver and gold recovered.

The building became the property of Mary P. Moore, who resold it to confectioners Hawley & Hoops in November 1904.  In reporting the sale the Real Estate Record and Builders’ Guide noted “This is the old Tiffany factory property.”

The new owners commissioned architect Charles E. Reid to draw plans for $15,000 “worth of improvements.”  The Record and Guide reported these would include a five-story side extension “and several interior changes.”

John Savage Hawley was born in upstate New York, but had spent a great deal of time in Texas, Nevada and California.  He made a modest fortune in the lumber industry.  But when he returned to New York in 1870, he divested himself of his lumber interests and invested the funds in candy making with partner Herman Hoops.

When they moved their candy factory into the “splendid five-story building,” they were employing up to 800 workers and were among the largest confectioners in the nation.   The company’s candies were marketed under the brand name “A No. 1” and from here they produced “plain and decorated creams, marshmallows, plain and fine chocolate creams, premium mixed candy, peerless vanilla chocolate, cream almonds, pralines and macaroons.”   Little boys were especially fond of the chocolate cigars.

Hawley & Hoops brought in the latest in candy-making machinery, some of which John Hawley designed.  He was responsible for the pressing machines that embossed chocolates into shapes—buffaloes, violins, smoking pipes and lobsters, for instance.

Hawley & Hoops remained in business until 1952.  That year Forrest Mars purchased the operation, merging it with his M & M Mars candy company.

Throughout the decades Nos. 53-55 Prince Street would be home to a variety of small manufacturers and businesses.  Its history as the workplace of some of the world’s most expert silversmiths and designers was slowly forgotten.

Then, in 1982 as the Soho neighborhood was transformed by artists into one of galleries and studios, the upper floors were converted to “joint living-working quarters for artists” and the ground floor became an art studio and store.  The conversion was completed in 1985. 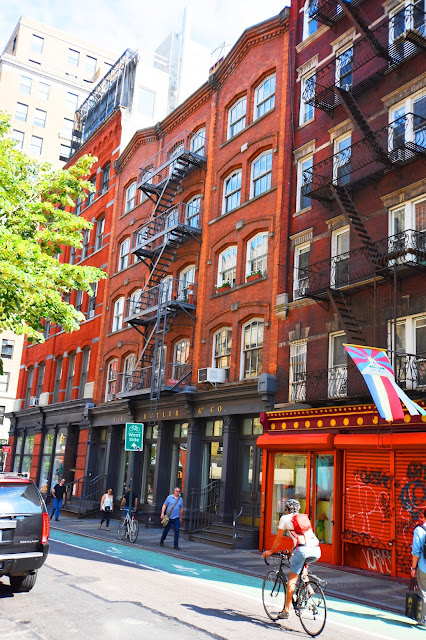 Today the handsome factory building is home to E. R. Butler & Co, manufacturers of architectural hardware.  The firm has sympathetically restored the façade, which appears much as it did when some of the world’s most sophisticated and expensive silver pieces were designed and manufactured here.