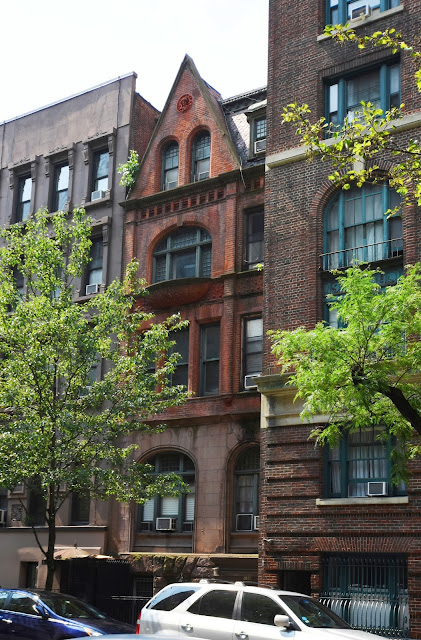 On February 8, 1884 The Real Estate Record and Builders’ Guide gave readers an idea of just how busy developer Edward J. King and his architects of choice, David and John Jardine, were on the Upper West Side.  King had partnered with John D. Crimmins in “creating a select neighborhood” on West 68th Street between Ninth and Tenth Avenues.  Ground had been broken and D. & J. Jardine had designed the nearly two dozen upscale residences.

In the meantime, plans were being filed for five brick and stone rowhouses on West 71st Street between Columbus Avenue and Broadway.   Edward J. King had once again relied on the services of the Jardines to design the row.  Each of the 20-foot wide residences was projected to cost $17,000—about $425,000 today.

The houses were completed in 1885 and included No. 136.  Like its neighbors, it was designed in the Queen Anne style—high popular on the West Side at the time.  The architects kept the visual weight of the structure at the base by the use of materials and decoration--darker stone below and lighter colored masonry above.  The English basement was faced in heavy rough-cut brownstone blocks.  The parlor floor, above a high stone stoop, was faced in planar brownstone with minimal decoration.

Above, the asymmetrical design expected in Queen Anne included terra cotta ornaments, and a delightful half-bowl balcony at the third floor where the opening was surrounded by many-paned panels. A pointed, off-set gable sat before a steep slate-tiled mansard.  It was adorned with a terra cotta roundel with the head of a woman.

In April 1888 George R. Read paid $30,400 for the house.   Read was the principal of the well-known insurance and real estate brokerage firm George R. Read & Co.  He was described by the Record & Guide a year earlier.  “George R. Read has handsomely-appointed offices in the elegant Astor building at No. 9 Pine street, of the whole of which he has charge.  Mr. Read has long been known as a prominent and successful broker and has conducted many important sales.”

By the turn of the century the house was owned by Addie B. Curtis, who leased it to dry goods importer Frederick A. Von Bernuth.  The German-born businessman was president of Curtis & Von Bernuth Manufacturing Company at No. 477 Broome Street, and a director in both the German-American Bank and the Germania Life Insurance Co.

Among Von Bernuth’s domestic staff was Mrs. Sophie Siems.  The aging servant had been in Von Bernuth’s employ for nearly four decades.  As was often the case with long-term domestics, Sophie was viewed as much as a dear friend as a servant.

On January 2, 1904 Sophie Siems died in the 71st Street home.  Her death notice in The New York Times noted that she had been “in the service of Frederick A. Von Bernuth for the last thirty-eight years.”  Her funeral services were held in the parlor of No. 136 West 71st Street on Tuesday morning, January 5, at 9:30.  It was a gesture on the part of the Von Bernuth family that expressed their close relationship.

When the Real Estate Record and Builders’ Guide reported on the sale of No. 136 on April 20, 1918, it got the history of the house wildly wrong.   The publication said that Addie B. Curtis had “acquired the property in 1881”—four years before the house existed.

The buyer was Danforth B. Cardoza, treasurer of the Scandinavian Trust Company.  Cardoza had no intention of moving in, however.  Within two weeks he resold the house to builder A. I. Mordecai who, on May 25, he announced that architect W. F. Staab was working on plans to convert the residence “into bachelor apartments.”

The $8,000 renovations were completed by October.  They included moving the entrance from the parlor level to the basement.  The former entrance was transformed to a window. The new entrance, a few steps below the sidewalk, now included double oak doors framed by handsome stone pilasters under an entablature.

If Mordecai envisioned the apartments being reserved for unmarried men, he had quickly changed his mind.  On October 8, 1918 The Sun reported that an apartment in the building had been leased “to a Mrs. McLane.”

In 1924 a high school teacher, Susan Loomis lived here.  She would be a part of a bizarre and suspicious case involving missing jewelry that year following the accidental death of her 49-year old fiancé, Dr. George W. Partridge.

Loomis taught in the Dickinson High School in New Jersey.  She had known Partridge for 18 years and the pair had been engaged for 10 years.

Partridge lived in an apartment house at No. 140 West 55th Street.  On September 13, 1924 Mrs. James L. Joughin, who lived in the apartment directly above the doctor, was found dead of carbon monoxide poisoning.  The next day Dr. Partridge died of the same cause.

Susan Loomis arrived at the apartment before the doctor’s family.  She removed jewelry and put it in a safe deposit box “for safe keeping until such time as a will might be found.”

On November 18 Partridge’s sisters, Mrs. Maude M. Stevens and Mrs. Lillian A. Whitehouse, were appointed executrices.  They requested Susan Loomis to retrieve the jewelry and, according to her, she did so, withdrawing the items from the Corn Exchange Bank vaults at Columbus Avenue and 72nd Street on Christmas Eve.

The New York Times reported “when she arrived home at 1 o’clock Christmas morning, the teacher alleged, she found the door to her apartment jimmied, the apartment robbed…Miss Loomis said the jewelry was stolen then.”

The two sisters did not buy the robbery story.  They sued Susan to compel her “to deliver to them jewelry found in his apartment the day [Partridge] died.”   Their petition alleged that she used the robbery as a cover for the disappearance of the jewelry and “claimed she had said she would never give up except through the courts.”

Susan’s lawyer dismissed the women’s accusations.  “The only fair conclusion is that this respondent is an innocent victim of circumstances.  Her own property was lost with the jewels and she has been the sufferer.”

Whether Susan Loomis had indeed made off with the missing jewelry would never be known.  Surrogate O’Brien dismissed the application of the doctor’s sisters on August 4, 1925.  In the meantime, they went after Mary M. Banks, the owner of the apartment 55th Street house.  They sued for $50,000 in damages charging neglect in the care of the heating unit in the building that resulted in their brother’s death.