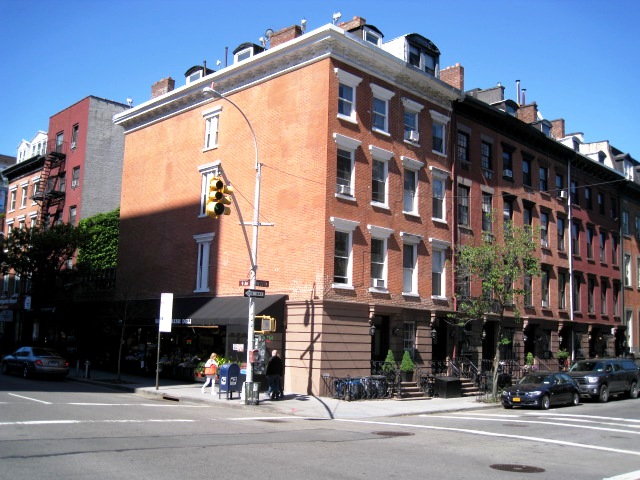 Real estate developer James N. Wells was a good friend of Clement Clark Moore, best known known for his poem A Visit From Saint Nicholas.  As Moore’s family estate, Chelsea, was divided into building plots in the first decades of the 19th century, Wells was almost single-handedly responsible for its development.

In 1835 Wells erected a brick-faced mansion for himself at No. 414 West 22nd Street—about twice the width of an average building plot.  The house was conveniently around the corner from his office at No. 183 Ninth Avenue.  Two decades later he laid plans to fill the vacant lot between his home and the avenue with a row of handsome matching homes, Nos. 400 through 412 West 22nd Street.

In stark contrast to his own double-width mansion, these houses were only a few inches over 14 feet wide.  Working in the now-popular Italianate style, the architect used linear elements to give the illusion that the houses were wider than they in fact were.    The doorways were recessed into the rusticated brownstone base—the straight lines of which drew the eye vertically along the row.   Shallow stoops and understated entrances drew little attention; unlike high brownstone stoops which would have blatantly advertised their proximity to one another.

The houses were additionally unified by a long cast iron balcony at parlor level, above the first floor cornice.   Dormers perched along the roofline where the shallow hipped roofs rose from the heavy bracketed cornice.

No. 400 sat on the corner lot—normally the most desirable location because of the opportunity for additional windows along the side.  For some reason, however, the house received only three openings on Ninth Avenue, one per floor.

At the time of the Civil War the owner of No. 400 preferred to remain anonymous when, in 1865 a donation of a “bundle of clothing” was sent to the St. Barnabas House of the New York Protestant Episcopal Mission Society.  It benefactor may have been Dr. H. L. Coit, who lived here by 1870.  He would become Secretary of the College of Pharmacy within a few years; and was the first of a long string of physicians in the house.

Dr. Coit was in the house at least into 1871; followed by the ambitious and strong-willed Dr. Caroline J. Yeomans.   She advertised her office hours in the house as “9-12” daily.   Dr. Yeomans was 39 years old and still living and practicing at No. 400 West 22nd Street on Saturday, March 6, 1875 when Lavinia C. B. Keep died of heart disease in Brooklyn.

Lavinia was the wife of the esteemed Brooklyn physician Lester Keep.  The couple’s son S. Hopkins Keep, had followed his father’s profession and operated his medical office from the family home at the corner of Vanderbilt and Gates Avenue.

The medical community was most likely shocked when the following year Dr. Keep “a physician of extensive practice in Brooklyn, and now over 84 years old, having buried his first wife in March, 1876 [sic], married Caroline J. Yoemans, an M. D., aged about 40 years,” as reported in The New York Times.

Caroline left West 22nd Street and moved to Brooklyn with her new husband.  But the strong-willed female doctor had no intention of sharing a practice with her step-son.  The Times reported “Shortly after the arrival of Mrs. Keep, M. D., the step-son had to take down his sign and vacate the premises.  Whereupon Mrs. Keep put up her tablet as a practicing physician.”

The younger Dr. Keep immediately filed two law suits—one for the money advanced for the erection of a memorial to his mother who was buried in Fair Haven, Connecticut; “and the other against the father and step-mother to decide the amount of his interest in the house…from which he was ejected,” reported The Times.

In May 1875, following Lavinia Keep’s death, Lester Keep revised his will, bequeathing the house to his son.   But when he married Caroline Yeomans, he deeded the property to her and destroyed his will.   Caroline then “demanded that her step-son should pay rent for his apartments or clear out,” said The New York Times on June 29, 1878.  The judge was unsympathetic with Caroline Yeoman Keep’s treatment of her step-son.  He found her guilty of “fraud” and directed her to pay S. Hopkins Keep $5,478.22—about $135,000 today.

In the meantime, the house on 22nd Street had become home to yet another physician, Raul S. Gage (whose name was sometimes spelled “Ruel”).   By 1883 he had moved to nearby No. 369 West 23rd Street and Dr. William Henry Weston moved in.

Weston, who was born on a Hancock, New Hampshire farm on August 8, 1849.  He had married Frances Pope.  In 1889 William Willis Hayward described his modest background. “In his youth Doctor Weston attended the district school a few weeks each year, and worked on the farm the rest of the time.  In 1866 he attended the high school in Peterboro one term, and the next year assumed the charge of the farm, and from that time until he was 21 years of age he remained at home, attending school during the winter terms.”

For the next few years Weston bounced around, taking jobs in a grocery store in Omaha; teaching in Marlow, New Hampshire;  and serving as a waiter at a resort hotel.  He continued to work the family farm while he studied medicine in Manchester, finally entering the College of Physicians and Surgeons in Brooklyn.  By the time he moved into the house at No. 400 West 22nd Street, he was recognized as a specialist in spinal diseases.

On April 15, 1889 Weston was called from the house to that of Dr. George R. Gyles, who lived a block away at No. 417 West 23rd Street.  Gyles was well known, having practiced medicine in the city for nearly four decades.  But the death of his daughter a year earlier, coupled with a malpractice suit that cost him $1,500 shortly afterward, had affected him deeply.

That morning, around 8:30, Dr. Gyles entered his wife’s room with a goblet of white liquid.   The New-York Tribune reported that “after chatting with her for awhile on commonplace subjects, he asked her to take a drink from the glass which he held in his hand.  Mrs. Gyles thought that the mixture was magnesia, which the doctor had been in the habit of taking frequently, and refused to touch it.”

The doctor gently pressured her, saying he thought it would be beneficial to her.  She refused again and he “said something in an undertone in a petulant manner and went to his room.”

A maid was passing by the doctor’s door about a half an hour later, when she heard groans.  Opening the door she found him lying on the bed only semi-conscious.  When she shook him and asked what was the matter, he opened his eyes and said “I am dying.”

When Dr. Weston arrived, Gyles’s son was in the bedroom.  “The son raised his father’s head from the bed to give him relief and he died in his son’s arms,” recounted the newspaper.   There was nothing that Dr. Weston could have done to save the physician.  The powder he had dissolved in the goblet was strychnine.   “It was evidently Dr. Gyles’s intention to have his wife die with him,” said the Tribune, adding “Mrs. Gyles is deeply affected and is suffering from nervous prostration, which is aggravated by the narrow escape which she had from death.”

The call to Dr. Gyles’s home was not out of the ordinary.  On October 22, 1896 Dr. Weston was called to the boarding house at No. 361 West 21st Street.  A servant girl, Mary O’Brien, had smelled lighting gas in the hallway and traced the odor to the door of 29-year old broker Gerald Griffin on the third floor.  When the door was opened, he was found unconscious on his bed, having attempted suicide.

Dr. Weston and another physician, Dr. Rice of No. 213 West 23rd Street, worked on the man until about 9:00 that evening, when he was taken to New-York Hospital in critical condition.  Newspapers explained “It was said that he had been drinking heavily of late, and had become despondent on account of business troubles.”

In another instance, Weston was called to the house of Albert Emery at No. 339 West 20th Street.  On the morning of December 9, 1898, Emery’s 68-year old brother-in-law, Washington Freeman, and his wife arrived from Portsmouth, New Hampshire for a visit.  Freeman was President of the Mechanics and Traders’ Bank in Portsmouth; as well as the former owner of the Portsmouth Chronicle and Gazette.

That morning Freeman complained of chest pains, which increased after lunch at a restaurant on Broadway near 22nd Street.   The pains were such upon leaving the restaurant that Freeman asked his wife to call a carriage.  On the way to the Emery house, the man lost consciousness.

“On reaching the house he was assisted to a lounge in the parlor and a doctor was sent for.  Dr. W. H. Weston of 400 West Twenty-second street was the first to arrive, but Mr. Freeman was dead when he got there,” reported The Sun the following day.

By the time the house at No. 400 West 22nd Street was sold to Julia R. Donnelly in September, 1918, stores had already been carved into the Ninth Avenue base.   She leased it to the family of Thomas F. Burchill, an auctioneer and New York State Assemblyman.   Burchill and his wife had five children.  But Donnelly apparently changed her mind about renting rather quickly.

On October 15, 1920 The New York Times reported that she “is seeking to regain possession of her property, 400 West 22d Street, under the provisions of one of the new rent laws which says that an owner may recover possession for the personal occupancy of himself and his family.”  The Assemblyman was apparently able to hold out for another year—directories still listed him in the house in 1921.

In 1941 the house was converted to apartments, two per floor.   Later that year Japan bombed the United States air base at Pearl Harbor; pulling the U.S. into the World War.  Within months Helen Richey was on her way to England where she became a member of the Aviation Transport Auxiliary, a group of American women who supplemented the British Women’s Ferry Command.  One of Richey’s assignments was to fly loads of bombs from munitions factories to air bases.

Before the war Helen Richey was already well-known as the only female passenger airline pilot and the only woman to fly the United States mails.  She was briefly a co-pilot for Central Airlines, beginning in December 1934; but resigned after an ugly controversy over the physical capability of a woman to fly an airliner.   She was co-pilot with Amelia Earhart in the Bendix Trophy race of 1936—the same year she took the record for the world’s altitude record for light planes.   In 1940 she received the first instructor’s license ever awarded a woman by the Civil Aeronautics Authority.
Following the war Helen Richey returned to the States and took an apartment in No. 400 West 22nd Street.  On Saturday evening, January 4, 1947 she gave a party in the apartment for a few friends.  The following morning one of the guests called and spoke to her.  It was the last time anyone would hear her voice.

When the same friend, Mary Parker, could not get in touch with her after more than a day, she contacted neighbor Robert Wright who lived across the street at No. 405 West 22nd Street.  He used a passkey to enter Richey’s apartment, where he found the 37-year old aviator dead in her bed.  Her death was ruled a suicide by overdose. 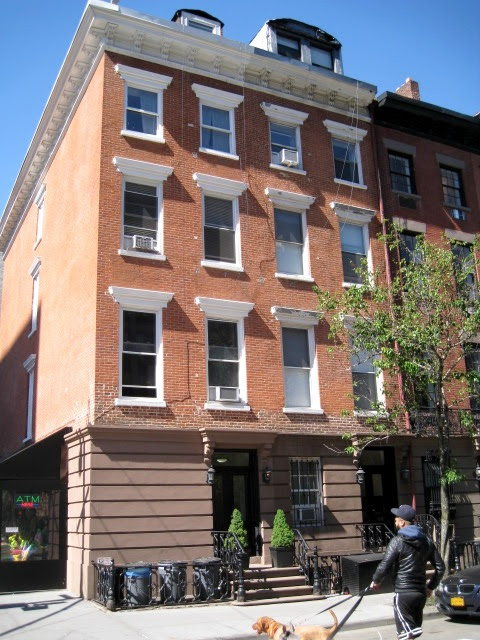 The handsome house underwent interior renovations in 1982, resulting in a total of five apartments in the building including two duplexes.

photographs by the author
Posted by Tom Miller at 3:52 AM