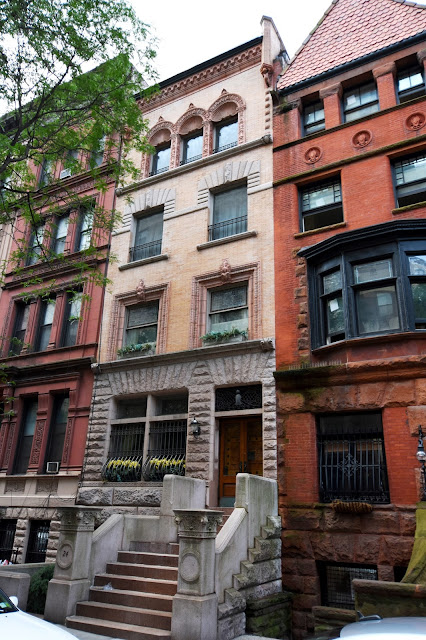 In the 1880s the block of West 71st Street off Central Park filled with upscale homes; most of them rows of three or more built by speculative developers.  But No. 24 stood alone.

Commissioned by the widowed Elizabeth Milbank, it was designed by the well-known firm of Lamb & Rich in 1888.  Hugh Lamb and Charles Alonzo Rich had been partners for eight years and their designs were already spread throughout the boroughs—Harlem’s Mount Morris Bank building, the Astral Apartments in Brooklyn, and the main building of Manhattan’s Barnard College, for instance.  A year earlier the architects had completed Theodore Roosevelt’s country house in Oyster Bay, Long Island, “Sagamore Hill” and begun designs for three Queen Anne houses next door to Elizabeth Milbank's site.

For the Milbank commission, they turned to a playful take on Romanesque Revival, splashing it with Renaissance touches.  Lamb & Rich stacked disparate layers to create a good-humored and pleasing whole.

The English basement and parlor levels were faced in rough-cut granite.  The stoop, protected by heavy stone wing walls, nearly doubled in width as it tumbled down to two formidable stone newels.  Above were three floors of beige iron spot brick.

The ornate terra cotta window surrounds of the second floor featured tongue-in-cheek keystones of armored knights with closed helmets.   Delicate stained glass filled half of the openings.   One floor above, the architects introduced the rough-cut stone again for the aggressive splayed lintels.   The sills at this level terminated in delicately-carved scallop shells.

The fourth floor was a Venetian fantasy.  Three connected openings were framed in elaborate terra cotta; their arches filled with deep concave shells.  The shell motif was carried out a row of terra cotta scallops that marched up either side of the façade.

The complex cornice, also executed in terra cotta, featured more shells.  They provided the spaces between the corbels and dotted the spandrels.  But most endearing of the architectural touches were the two naked, winged putti who held up the brick piers flanking the cornice.  Their pudgy grimaces attest to the weight of their never-ending load.

On October 18, 1892 her estate sold the 20-foot wide house to John D. Barrett for $47,000—in the neighborhood of $1.3 million today.   Young and wealthy, Barrett was a partner in the insurance brokerage firm of Higgins, Cox & Barrett at No. 50 Wall Street.   He and his wife, the former Nellie Adams, had five children, Sarah, Alice, Helen and John David, and Clarence Redington Barrett.

Only two months before purchasing the home Barrett had suffered an unsettling tragedy.   His brother, Charles M. Barrett had worked as an insurance adjuster in at Higgins, Cox & Barrett for some time.  Described by The New York Times as “tall, handsome and well-dressed,” the 29-year old bachelor lived with his mother and sisters on Staten Island.

But he suffered what a co-worker termed “an attack of nervous prostration some time ago” and endured severe head pains ever since.  Charles Barrett talked of taking a trip abroad for his health that summer.

Instead, on August 12, 1892 he was at the office, conducting business as usual.  He left work before midday and, instead of going to Staten Island, he boarded a ferry for Jersey City.  He checked into Taylor’s Hotel and five minutes later a chambermaid outside his door heard groaning.

“The door was forced open and he was found lying on the bed breathing stertorously and with a bullet hole, from which the blood was streaming, in his temple,” reported The Times.    A messenger boy was sent to No. 50 Wall Street to bring anyone acquainted with Charles to Jersey City.  It was, of course, John D. Barrett who responded.

“Within half an hour a brother of the dead man rushed into the hotel to ask the occasion of the summons, and sank overcome into a chair when told the story of the tragedy,” said the newspaper.  John Barrett was too emotional to speak with reporters; however The Times, after interviewing co-workers, announced “it is thought he was suffering from aberration of mind when he killed himself.”

Like all other moneyed families, the Barretts spent their summers away from the city.  On October 14, 1894 The New York Times remarked that “Mr. and Mrs. John D. Barrett have returned from the Adirondacks to their home, 24 West Seventy-first Street.”  But the Barretts apparently preferred the ocean to the mountains and before long established their own summer estate on Jack’s Island near Greenwich, Connecticut.

The Barrett property there abutted the estate of Mrs. Frank Jay Gould.  On July 13, 1908 a group of laborers were constructing a new sea wall for the Barretts.   While swimming during a break, supervisor Dominick Bond was suddenly seized by cramps.

The New-York Tribune reported “He sank twice, and when he came up was unconscious.  One of the excited Italians, taking it for granted that the man was dead when he came up, passed a rope around him and tied him to a nearby pile while he ran to telephone the medical examiner.”

Dominick Bond, now lashed to a pier in front of Mrs. Gould’s home, was in fact not dead.   But by the time authorities arrived, he was.

“It is the general opinion that the man could easily have been resuscitated by rolling on a barrel, or if some similar means of such aid had been given, when he was first reached,” said the newspaper.  When questioned, the worker said “he believed Bond dead, and thought it was against the law to take a body from the spot where death overtook it.”

Happier times came to the Barrett family as the girls reached the age for their debuts into society.  In December 1915 the newspapers reported on the coming out entertainments hosted by Nellie Barrett for Helen.  Two years later in August John and Nellie announced from the Connecticut home that Helen was engaged to Yale University senior, Homes Mallory.

When the Real Estate Record and Builders’ Guide reported on the sale of No. 24 West 71st Street on February 8, 1919, it got the history of the house astonishingly wrong, if perhaps more interesting.  “John D. Barrett sold the residence at 24 West 71st st. he erected some 20 years ago by day’s work at a cost of $54,000.”

As a side note, the following fall John D. Barrett was standing on the train platform in Greenwich, Connecticut when he leaned over to dump he ashes from his pipe bowl onto the tracks.  A freight train passing on a nearby track evidently drowned out the sound of the approaching passenger train.  The train struck Barrett’s head, killing him.

The purchaser of the 30-year old home had the captivating name of Montifiore Lorth.  He quickly resold it within the month to “a physician who will occupy,” according to The Sun.

That physician was Dr. Francis D. Gulliver, an eye specialist.  He remained here for a decade before purchasing the nearby house at No. 22 East 78th Street for his office and residence in 1930.  Gulliver retained possession of No. 24, however, leasing it to upscale tenants.

When he leased it in September 1940, “for a long term” the New York Times remarked that “the lessee will renovate the house.”  It became home to William J. Solomon and his sister, Grace G. Solomon.   Their father, attorney J. P. Solomon, had founded the True Craftsman Masonic Lodge, 651 and had been editor of The Hebrew Standard.

William Solomon had succeeded his father in editing the publication until it merged with The American Hebrew.  Since 1936 he had been sexton of the Central Synagogue at 55th Street and Lexington Avenue.  On October 15, 1947 he died of heart disease at the age of 71.

It was the end of the line for No. 24 West 71st Street as a private home—at least for many decades.  In 1951 there were two apartments per floor and was home to the Vedanta Society, a Hindu organization.

Somewhat surprisingly, the group celebrated Christmas, explaining “We worship not the Christ of ‘churchianity’ but the Christ who embraces the essence of the spiritual truth of all religions.”  Nevertheless, there was a Christmas tree in the room when Swami Pavitrananda, a Hindu monk, delivered his sermon on December 23, 1951.

The Times reported “A Christmas tree was set at the side of a Hindu altar, adorned with red roses and surmounted with a photograph of Sri Ramakrishna a Hindu saint of the nineteenth century who gained his concept of God from Hinduism, Islamism and the Gospel of Christ.”

Decades of misuse resulted in low sheetrock ceilings, discarded hardware and ruined architectural details.  But an unexpected champion appeared in the form of Michael Balk, a partner in Price Waterhouse, and his wife, Marcie.

The couple purchased the semi-derelict mansion and began a meticulous $1 million restoration which was completed in 1993.  Some elements, hidden by paneling and sheetrock reemerged—like the coffered mahogany ceiling in the entrance hall and, according to Tracie Rozhon of The New York Times on October 20 that year “paneled curving wainscoting up the winding staircase, six-foot-high linenfold paneling in the dining room and elaborate inlaid floors.”

But other features had been lost.  Only one original doorknob had survived, for instance.  Mrs. Balk sent it to a foundry in California to be duplicated.  Plaster craftsmen were brought in to reproduce what remained of ceiling moldings.  Woodworking experts spent months restoring the floors and paneling. 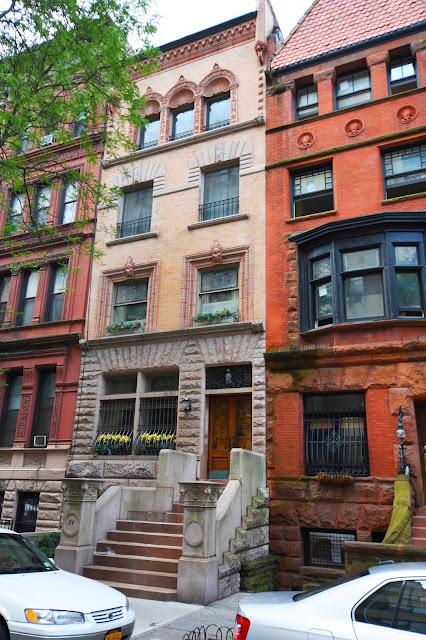 The Balks sold the restored mansion in 1996 to a banker and his family.  Today Lamb & Rich’s whimsical but elegant creation looks much as it did when the Barrett family took possession in 1892; a time when the Upper West Side pooh-poohed the stuffiness of East Side residential architecture and just had fun.