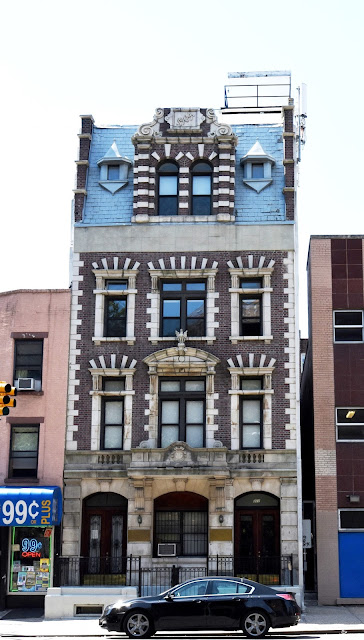 The oddly-shaped plot of land at the point where East Broadway melded into Grand Street saw immense change in the 19th century.  The four-story house at No. 311 East Broadway was home to broker James E. Betts in 1842 whose office was at No. 14 Wall Street.  But already changes in the neighborhood were underway.

The commercial district of Manhattan pushed forever northward, forcing residential neighborhoods out.  The Lower East Side’s old residents were replaced by the waves of immigrants that arrived throughout the next decades.  As the century drew to a close, Jews from Germany, Poland and neighboring countries had filled the area.  By the turn of the century about 50,000 Jewish immigrants arrived in New York Harbor every year.  While poor, most were respectable and hard working.  Some were not.

In February 1894 police barged into the house that had been home to James Betts half a century earlier.   The New York Times reported they “raided a gambling house kept at 311 East Broadway by Herman Rosenthal, Saturday night, and captured twenty-eight men, but not the proprietor.  They were engaged in a game of chance.”  The men were fined $1 each.

Soon, however, the Young Men’s Benevolent Association would take over Herman Rosental’s gambling house.  Organized in 1889 by a group of six young Jewish men seeking to provide a respectable place of social activity and learning for locals, it took as its motto “Education and Benevolence.”  Funded by wealthy philathropists, the Settlement Movement spurred the construction of settlement houses throughout the impoverished neighborhoods of Manhattan.  But The Young Men’s Benevolent Association was determined to make it on its own, without help from rich donors.

The group, understandably, started small.  And yet by 1899 they had the resources to rent No. 311 East Broadway and convert it to the Association’s headquarters. It boasted between 200 and 300 members.   The Times pointed out that “a library and reading rooms are maintained.”

The lofty goals of the Association sought to better the minds of its members and to educate them on current events in their new country, on history, and on the arts.  To this end lectures were given once a week by “men of prominence” invited by the group.  On January 13, 1899, for instance, Mayor Seth Low addressed “about 200 men and a few of their young women friends.”  He spoke that night on “The Greater New York Charter”—the important legislation enacted in January 1898 that consolidated Manhattan and the outer boroughs into one city.

The men of the Association worked tirelessly to raise funds for its own clubhouse.  They came one step closer when, in May 1902, they obtained title to No. 311 East Broadway.  The Real Estate Record and Builders’ Guide noted “The buyers now occupy the building.”

It would be nearly a year before the men commissioned architects Sass & Smallheiser to design their new building.   The Record and Guide reported that the plans called for a five-story clubhouse with an estimated cost of $35,000.

Largely overlooked today, Sass & Smallheiser were prolific in the Lower East Side at the time, producing for the most part tenement structures.  But their design for the Young Men’s Benevolent Association would dazzle.

For more than a decade the Flemish Revival style had been popular in Manhattan, most evidently on the Upper West Side.  But Sass & Smallheiser brought it downtown to East Broadway; adding touches of the equally-popular Beaux Arts style for good measure.   An exuberant concoction of red brick and granite, it featured all the decorative elements of Flemish Revival—the stepped side gables, playful dormers poking through the steep tile-covered mansard, and bold stone voussoirs that fanned out over the openings—all on a rusticated Beaux Arts base supporting a Beaux Art stone balcony.  If the two styles were by definition conflicting; they managed to happily coexist at No. 311 East Broadway.

High above the sidewalk a panel announced the expected date of completion:  1904.  It was off by only a few months.  The dedication was held at 2:30 on the afternoon of April 30, 1905.  The press was as impressed by the building as by the fact that it came to be solely through the work of the humble members.

The Evening World reported on the club’s many amenities. “But the fine equipments of the house are not the things that commend it most conspicuously to the public interest,” it said.  “The new building is the occupying association’s very own in every way.  It is the fruit of sixteen years of joint planning and harmonious effort.  The $50,000 which the establishment cost came in contributions from four hundred very earnest and hard-working young men; not in gifts from any great and rich friends.”

The New York Times called it “one of the handsomest buildings in that section of the city.”  The New-York Tribune said it “is now one of the show places of the East Side.  Like The World, The Times was impressed that the necessary $50,000 (in the neighborhood of $1.4 million today) came from the members, “mostly in the humbler walks of life.”

Mayor George McClellan chimed in during his remarks at the dedication.  “It was no small nor easy task for you to erect this splendid edifice.  It was a task from the carrying out of which older and wiser heads might have discouraged you.  Bu you have succeeded splendidly and are to be congratulated.”

Dr. David Blaustein, President of the Education Alliance, pointed out the group’s origins.  “You, or your parents, have come from countries of oppression where there were no opportunities for our race.  In this country we can proclaim aloud and without fear that we are good Jews in order to be better citizens.”

The Tribune reported that the “internal appointments are in keeping with its external appearance.”  The newspaper said “Throughout the greater part of the building the interior is finished in dark wood, with antique furniture, and presets an especially attractive appearance.”

The first floor contained the circulating library and reading room, and a billiard room.  In the basement were bowling alleys.  On the entire second floor was an auditorium, capable of seating 500; and the offices.  On the third floor were classrooms and “the cosey social rooms and ladies’ parlor,” said the Tribune.

In the classrooms interested members could receive schooling on a variety of areas.  Teachers were volunteers, some of them coming directly from the membership.  The New-York Tribune pointed out on June 18, 1905, “That it is productive of results is shown by the fact that two young men who received their early training in the club school are this year members of the graduating class at the College of Physicians and Surgeons of Columbia University.  Another will be graduated from the New-York College of Dentistry and till another form Cooper Union.”

The gymnasium was on the fourth floor and the janitor’s apartment was tucked into the gable above it.

Seven months later the building was used as a rallying point in reaction to the October massacre of 800 Jews in Russia.  On November 14, 1905 The Jewish Defense Association met here “to call Jews to help their countrymen in Russia arm themselves in defense of their rights and lives,” reported The New York Times.  The group pleaded for funds to arm Jewish Russians.  “New massacres are preparing.  Our people must be possessed of arms to defend themselves and their honor.”

Within ten days the fund-raising had netted nearly $1 million.  The members of the Young Men’s Benevolent Association did their part.   The Times on November 24 reported that they were “arranging a big open-air demonstration…to be held in one of the large public parks not yet determined upon.”

Other Jewish groups used the auditorium at No. 311 East Broadway as well.  The Federation of Jewish Organizations took advantage of the large hall for meetings.  The group addressed and acted on issues of political and social importance.  In December 1908, for instance, it was decided to ask Congress to appoint rabbis as military chaplains.  At the time the Army and Navy had only Christian priests and ministers.

At the same meeting Nathan Wise brought up the possibility of religious prejudice on the part of immigration agents.  “There seems to be an underground prejudice against the naturalization of Jews and I believe that the new law which compels them to speak English is part of the plot.”

By 1909 the membership of the Young Men’s Benevolent Association had risen to 400.  But within five years it found itself in financial trouble.  In September 1914 the group lost its building in a foreclosure auction.

No. 311 East Broadway became home to the Arnold Toynbee House in 1918.   Founded by Rose Gruening, it was named for the English social reformer who started the settlement house movement in London.   Neighborhood children were welcomed here as a refuge from the streets.  Various activities and classes were held here, like those of the Working Girls’ Recreation Committee which gave classes in “dancing, chorus singing, elocution and music appreciation.”  The Annual Report of the Jewish Protectory and Aid Society noted that in 1914 “A dancing class of special interest is being held at the Arnold Toynbee House to which the boys of the neighborhood are invited and a small sum is charged for each dance.”

Like the Young Men’s Benevolent Association, the Arnold Toynbee House offered free lectures.  And in July 1918 the building opened as a summer “play school” for the needy children between the ages of 6 and 12. The New-York Tribune reported “Special attention will be given to looking after the health of the children…A standard luncheon at five cents will be served.”

In 1929 the New York Charities Directory encapsulated the work of Rose Gruening and her Arnold Toynbee House. “A neighborhood house affording the usual club activities, a roof garden, which last summer accommodated a play school for anaemic children, kindergarten, gymnasium, auditorium for lectures, concerts and dances, bowling alleys and pool tables for adult recreation.”  The Directory noted that the House was “supported by voluntary contributions;” but neglected to say that Rose Gruening was its greatest sponsor.

Called by the neighborhood “the angel of Grand Street,” she had funded the settlement with her own money and worked tirelessly with no compensation.  The daughter of a prominent eye and ear specialist, she grew up in privileged surroundings and graduated from Vassar College.

The New York Times would later say of her “A calm, efficient, sympathetic and motherly person, she was known and loved by thousands of the East Side’s poor many of whom grew up to become well off financially after she had started them on their careers with her own money and returned to aid her work. She often helped to finance the college education of the youths she had aided as children.”

Around 1931 the Arnold Toynbee House was renamed the Grand Street Settlement House.   In 1936 it moved to No. 283 Rivington Street, not far away.   In reporting on the new location on November 18 that year, The New York Times noted “The old building which stood at 311 East Broadway was inadequate and was condemned last Spring by the Fire Department.”

Happily, the condemnation resulted in repairs rather than demolition.   In 1941 No. 311 East Broadway was converted to the Agudath Taharath Mishpacha of the East Side, Inc., “the Association of Family Purity.”   The renovations resulted in a mikvah, the ritual cleansing baths required for all Orthodox Jewish women.  Also in the building was the Hebrew Teachers Training School for Girls.

In 1994 a $200,000 renovation was initiated that modernized the 700-gallon roof-top cisterns that collected rainwater.  The pure water is processed through filters before filling the bathing tubs.

Today Sass & Smallheiser’s delightful 1905 structure continues to be used as the mikvah.  A bit grimy, it houses several chapters in the fascinating history of Jewish culture on the Lower East Side.