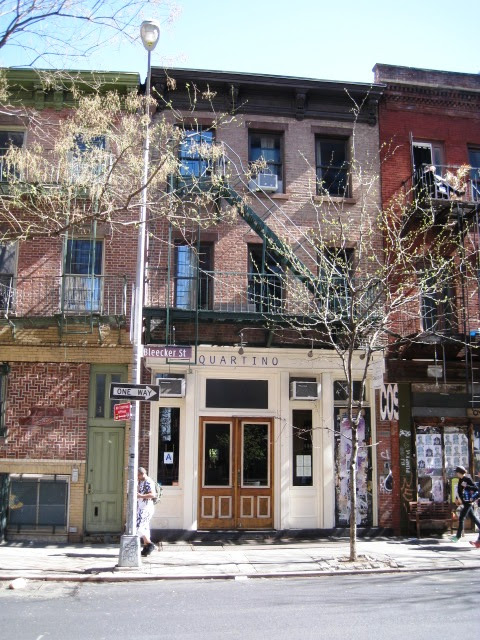 In the early 1820s the exclusive Bond Street neighborhood which was becoming home to eminent New Yorkers with names like Roosevelt and Astor.  Just one block south, in 1822, a two-and-a-half story Federal home was constructed for Stephen J. Brinkerhoff.  Located at No. 11 Bleecker Street it was clad in Flemish-bond red brick trimmed with modest brownstone lintels and sills.

The project was apparently purely speculative, for in 1823 the property was transferred to Henry Remsen.  Remsen was well-known in New York as a wealthy merchant from a long-established family.  He quickly turned it over within the year to John Culbert, who took title in 1824.

The Culbert family would retain possession of the house for years.  The title was passed to William A. M. Culbert in 1862,.  It appears that they leased the residence rather than living there.  In 1837 physician Abraham D. Clement was listed in New York City directories as living here.  By 1841 another doctor, Joel Foster, had taken occupancy.

A fascinating double portrait of Charles Henry Augustus Carter and his wife by Nicholas Biddle Kittell in the Museum of the City of New York suggests that they were leasing the house at the end of the 1840s.  The painting is temptingly described as depicting the couple “in their living room at 11 Bleecker St.”

Carter was born in France on March 25, 1819 and married Elizabeth Perces Brooks around 1845.  The couple moved to New York City by 1848, around the time the painting was executed.  The Carters’ address was on Carroll Place (a one-block section of Bleecker Street further west at Thompson Street) in the 1853; then at No. 123 Bleecker Street.  There is the possibility that the painting does depict Charles’ and Elizabeth’s first residence at No. 11 Bleecker Street.

Perhaps the Culberts' last tenants were the Sturges family.  On September 4, 1864 young J. T. Sturges was drafted into service of the Union Army.  William Culbert, a doctor, sold No. 11 Bleecker to Ludwig Anger two years later, in 1866.  A Prussian immigrant, Anger had the building updated by raising the roof to a full three stories and adding trendy Italianate elements.

While the Angers lived in the house; the renovation included rented rooms in the upper stories.  The neighborhood was already seeing the influx of immigrants and commerce--making it far grittier than it had been when respected physicians had lived at No. 11 Bleecker.   Although Ludwig Anger was gone from the building in 1880; the family retained possession.

The decline of the area was evidenced on June 13, 1894 when Samuel Deutsch appeared in court to transfer his saloon license from No. 170 Suffolk Street to No. 11 Bleecker.  The establishment of a saloon here was objected to by the Florence Crittenden Mission at No. 23 Bleecker Street.   The Mission pointed out the law “prohibiting saloons from being located within a certain distance of a church,” reported The Evening World.  “Deutsch’s counsel contended that the Mission is not a church.”

The following day The Sun reported that Judge Bischoff was still undecided on the case.  “Deutsch wants to open a liquor saloon at 11 Bleecker street,” said the newspaper.  “The Judge reserved his decision.”

While Deutsch served lager and beer downstairs, families continued to live upstairs.  In August 1895 four children living here set out to aid The World’s Sick Babies Fund.  Moe and Tillie Manisof, ages 11 and 9 respectively; and Kattie Rosenberg, 6 years old, and her 3-year old sister Fannie set up business at the corner of Bowery and Bleecker streets.  The philanthropic urchins sent a letter to the newspaper which appeared on August 20.

“Inclosed find $4, which we collected in three days at a lemonade stand, corner Bowery and Bleecker streets.”

Another tenant was Augusta Lagrand.  The following summer she traveled to Brooklyn to visit her married daughter at No. 232 Henry Street.  There, on August 11, 1896, the 53-year old woman died of the insufferable heat.

By 1897 the Record & Guide listed the Manisof children’s mother, Rosa, as the proprietor of the saloon formerly run by Samuel Deutsch.  It would remain in her name at least until 1902 when a notorious gangster, Abraham Kutner, took over the operation.

Kutner would not run the saloon long before he was in deep trouble.   On March 11, 1902 The New York Times reported “Kutner, it was said last night, had been under arrest for illegal [voter] registration.  He is well known on the east side, and during the election was known as a worker for the politicians who control the neighborhood.”

Lester Bennett managed a nearby saloon and worked as an undercover informant.  He was “one of the most efficient agents of John McCullagh, the State Superintendent of Elections,” said the New-York Tribune on March 12, 1902.  According to the newspaper, he “had been active in getting evidence against Kutner and several members of notorious gangs who perpetrated election frauds.  His life had been threatened.”

On March 11 several men came into the Bleecker Street saloon and told Kutner that Bennett had “put up a job” to have a fight take place the day before, which led to Kutner’s arrest.  The Tribune reported that the men “worked upon Kutner until he became enraged.”  The saloon-keeper stormed out of his bar and heeded to Hatch’s Saloon, at No. 311 Bowery, where Bennett worked.

Kutner threatened Bennett with a revolver.  Bennett offered to go back to Kutner’s saloon to prove he had nothing to do with the fight.  As they started for the door, “Paul McCarthy, ‘Flatnose Denny’ Sullivan and ‘Beansey’ Rosenthal, members of the ‘Hoop gang’ of repeaters, left a nearby hallway and followed.  A little later Bennett was shot by Kutner.”

A witness told investigators that Kutner “whipped out a pistol and, pressing it close to Bennett’s abdomen, fire.  Bennett sank to the sidewalk with a groan.  Kutner then started to run across the Bowery.”

The shot attracted a large crowd, including police.  Detective Binnings joined in the chase “and shouted to Kutner to stop, but the man ran, and was not caught until he reached Fourth Street, when the detective hit him on the head with his billy.”

It was the sort of neighborhood where criminals were held in higher esteem than police and Detective Binnings was temporarily in a threatening situation.  “Many of Kutner’s friends were in the neighborhood and were plainly in sympathy with him,” reported The Times.  “But the sight of nearly a score of policemen from Headquarters prevented any demonstration in his favor.”

Things in the neighborhood were gradually improving by the turn of the century when apparel manufacturing firms began taking lofts and office space.  On April 4, 1903 the Real Estate Record & Builders’ Guide reported that the Estate of Ludwig Anger had leased No. 11 Bleecker Street “for a term of 5 years at a rental of $6,000.”

Among the new tenants were Henry Kalb and Abraham Goldsmith who ran Kalb & Goldsmith.  Listed as “dealers in fur skins,” they were in financial difficulty by 1908 when a petition in bankruptcy was filed against them.  Nevertheless, the company was still operating here a year later, now with Charles Kalb as a partner.

At the same time the Fur Dealers Directory listed Londner & Birnberg in the building.  Following the Angers’ sale of the property in 1914, the property underwent a relatively rapid succession of owners.  Finally, in 1923, Benjamin Trachtenberg of Trachtenberg & Sons, purchased the building and held it for more than a decade.  In 1931 the owners initiated a formal conversion of the property to factory and store space, including law-required fire escapes. 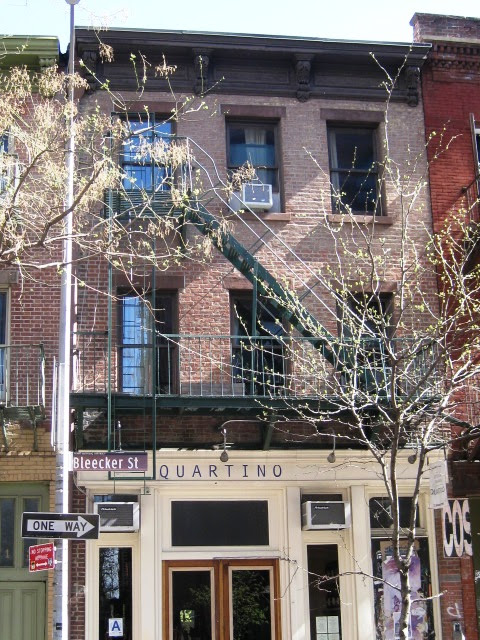 Apparel related firms, like the S. S. Hat Frame Co., here, in 1918, continued to lease space.   As the 20th century progressed, the little buildings along Bleecker Street suffered neglect.  But the revival of the area known as Noho resulted in renewed interest.   In 2004 the upper floors were converted to a single triplex apartment and today the ground floor—where gangster Abraham Kutner ran a saloon—is home to an organic Italian vegetarian restaurant.