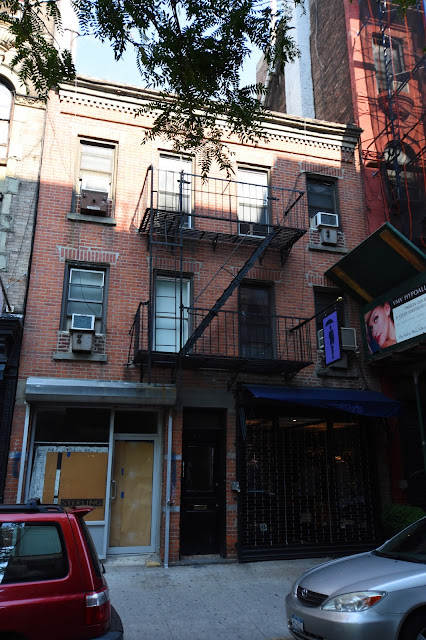 In the 1860s entrepreneurs eyed the three-story stable building at No. 225 Mott Street with interest.  The block was not a glamorous one, indeed; however even here the idea of a slaughter house was too much for neighbors to entertain.  In 1860 Trow’s New York City Directory announced that the application for the business was refused.

The no-nonsense structure had stood on the spot for, probably, at least two decades.  Above the livery stable low-income families rented rooms.   In March 1869 the building’s owner, P. Macnamara, and builder John O’Brien announced their plans to replace it with “a store and dwelling of brick, two stories.” That idea, too, fell through.

When the estate of Henry Manron sold the 25-foot property in December 1886, it was still described as a “three-story tenement and stables.”  William McKenna spent $12,000 for the building—about $311,000 today—and before long horses and vehicles would be gone for good from No. 225 Mott Street.

The street level was converted to shops.  McKenna and his wife took an apartment upstairs and moved his blacksmithing operation into the street level.  Another shop became home to Jacob Friedenthal’s harness making business.  He moved in in 1887.

Not only was Friedenthal a respected harness maker, he was active in politics.  On October 14 that year the leaders of all the anti-Tammany organizations met to nominate a candidate for the State Assembly.  George Lapp, the Fusion candidate for the district, had withdrawn his name saying that his business would prevent his traveling to Albany.  The following day The New York Times reported “Jacob Friedenthal, harness manufacturer of Mott Street, was nominated in place of Mr. Lapp.”

When Friedenthal moved in (he and his wife also lived in the building), the Teahan family had lived on the top floor for three years.  Charles McCarthy was another boarder.  Those who lived at No. 225 were, as would be expected, immigrants of meager means.

Sharing the first floor with Friedenthal’s harness shop and McKenna’s blacksmith shop in 1904 was a butcher shop.  By now McKenna had obtained the lucrative agreement for shoeing the Fire Department horses from about six fire stations.  The butcher, his wife and mother-in-law lived on the ground floor behind his shop.

The three proprietors would end up in court, sued by the now-widowed Teahan woman that year in a bizarre case regarding piano music. Their complaint started with Jacob Friedenthal, who reported her to the Board of Health as a nuisance some time earlier.

Mrs. Teahan had purchased a piano “on the installment plan” for her two daughters, Flora and Sarah.  Sarah played while Flora sang along.  Mrs. Teahan charged Friedenthal with having threatened to “have the Bureau of Encumbrances come and cart away the piano for rubbish.”

Friedenthal brought witnesses.  The Sun reported on March 2, 1904 “The harness maker, the horseshoer, the butcher, the cigarette maker and the man who punches holes in the metal discs for hurdy gurdies were all in court.”

“Did you ever shoe a horse, your Honor, before you got on the bench?  Well, I didn’t think you did.  But I’ll explain, it ain’t a rag-time job at all and you don’t want a funeral march either.  You don’t want any music at all, or else you want something you can keep time to without losing a stroke of the file.”

The blacksmith opined that “Good Ole Summer Time” would be a good tune to shoe horses to.   He hummed the tune for the judge and drew an imaginary hoof file back and forth along the edge of the judge’s desk to illustrate.  He complained that the Teahan girls repeatedly played the tune “Bedelia” and told the court “That tune ain’t fit to shoo hens to, and it’s raised the devil with me…I can’t stand this game any longer.”

But the butcher’s complaint was the opposite.  He found that “Belelia” “fits in just right after a spurt of fast chopping and gives a man a chance to pat his meat up in a mound for a new start without getting out of tune.”  It was the slower, “Good Ole Summer Time” that he objected to.

Another boarder, an Italian man, was asked by the judge “What tune do you need in your business?”  The Sun reported that he replied “I maka the cigarette. Maka the ladies play ‘Toreador.’ I always humma it at my bench.”

A neighboring bartender got into the act.   He said that the evening before the girls had played a new tune, “Sister Madeline.”  He could clearly hear the music “right up in the Teahan’s flat.”

“Now, Judge, that tune would drive a man to drink, but he never could mix to it…It spoiled a drink for an old fellow that comes in every night and is very particular.  I’d been mixing cocktails all the evening to the tune of ‘Bedelia’ and wasn’t expecting anything different.  Then the old fellow came in.

“I got his booze and his bitters and the ice into the mixing glass all right, and was kind of movin it up and down slow like, waiting for ‘Bedelia’ to start up again when out came the dirge.”

Jacob Friedenthal felt the court was missing the point.  He “said that he didn’t care what they played days, if they’d shut up the piano nights.”  He told the judge “When my wife wants a night’s sleep she has to go over to Brooklyn and visit my daughter.”

In the meantime Mrs. Teahan said “it was nobody’s business what they played and when they played it.”  She pointed out to the court that she had lived in the building for 20 years.  Friedenthal had been there only 17; so she should not be bossed around by the newcomer.

A frustrated magistrate dismissed the case, sending everyone home “with the advice to get along without a row.”

Later that year Charles McCarthy would find himself in court, charged with voter fraud.  That fall he attempted to register at the 11th District polling place.  He was challenged and when he signed his affidavit, he wrote “Neil McEnerney,” instead of the name he had given.  He was arrested and held at $1,000 bail.  When he tried to explain himself in court, he said he “forgot” when he wrote “McEnerney.”

Among the blue-collar residents of No. 225 Mott Street in 1907 was sewer worker Thomas Capanoccio.  He was excavating for the new salt water mains on the night of September 3 when tragedy happened.  The New-York Tribune related the episode.

“The night shift of twenty men, under Sylvester Cannon, started to work at 6 o’clock.  The laborers were nearly all Italians.  Suddenly a man who was using a pick doubled up and fell unconscious. Another pitched forward, then another.  Gas from an old sewer above the new tunnel, mingling with powder fumes from a blast caused the trouble.”

The three men were overcome by sewer gas.   They were pulled nearly a block through the massive sewer pipe by co-workers to fresh air.  Then it was noticed that Capanoccio was missing.

“He was found unconscious in a sewer pipe at Greenwich and Desbrosses streets, and died soon after being pulled out by other workmen,” reported the Tribune.  “With other men he was excavating for the new salt water mains, and the sewer main was accidentally broken on top.  Capanoccio crawled into the sewer, with the result that he was asphyxiated.”

Considering Friedenthal’s political activity, it is perhaps surprising that in 1909 his harness shop was used as a polling place.
In 1922 William McKenna sold the property.  It was possibly the disappearance of horses on the streets of New York that drove him out.  The Real Estate Record and Builders’ Guide used the sale as an opportunity to contemplate the changes in the area.

On August 5, 1922 it wrote “A sale that illustrates the changing character of neighborhoods in this city was that of 225 Mott street.  Owned for 42 years by the seller, the parcel in Mott street and other parcels nearby were populated by the Irish and the Germans when he acquired it.  Then came an influx of Italians who drove out the other nationalities.  Finally he Jews have settled there with no immediately prospects of exit.  In spite of the varying character of residents of the East Side property there is worth more now than it was 42 years ago.”

The buyers were real estate operators Norman S. Reisenfeld and Joseph F. A. O’Donnell.  At the time of the sale the building was assessed at $18,000.   The property was soon sold to an undertaker.  He commissioned Brooklyn architect Ferdinand Gavigano in 1929 to convert the upper floors to a single family home for himself and his family, and the ground floor to a garage.   Department of Buildings documents noted “approval for 9 autos two of which shall be of the funeral hearse type and garage approved only while conducted as accessory to undertaking business.” 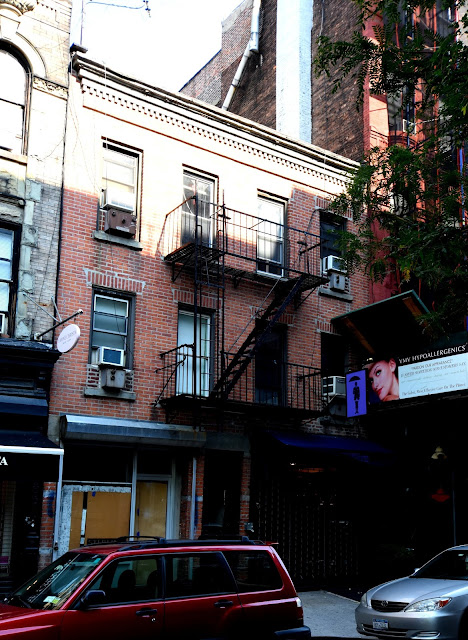 Today half of that garage remains while the other—where either horses were once shod, harnesses were made, or chopped meat was patted “into a mound”—is now a retail store.  And the stubborn little building that has hung on longer than nearly all of its neighbors continues to do so.