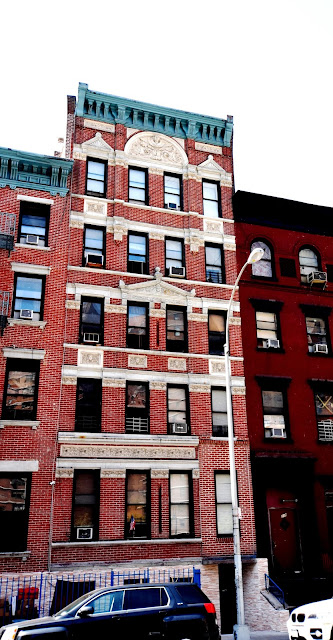 In 1843 the house at No. 251 East Broadway was being used by two German-born piano-makers, John Ruck and Henry Reichard, as their instrument shops.  It was here that year that Reichard changed the piano forever when he invented the “pedal pianoforte.”


As the century drew to a close No. 251 was once again being used as a private home.  Brothers Francis Thomas J. and James J. Nealis lived here in a neighborhood that was seeing immense change.  The wide Greek Revival homes on East Broadway had been built for financially-comfortable families.   By the 1870s the neighborhood had filled with Irish immigrants, who were now being pushed out by the throngs of Jews fleeing persecution in Europe.


Following the death of Francis Nealis in the house on October 20, 1891, his brothers made a decision to leave.   On June 4, 1892 American Architect and Architecture reported that James Nealis had hired architects Graul & Frohme to design a five-story “brick and stone flat” on the site.  The Real Estate Record and Builders’ Guide was less complementary, calling the proposed building a “tenement.”


But the plans of Graul & Frohme lay on the drafting table unused.  Nealis sold the property to Simon Liboritz, his neighbor next door at No. 253.  On June 9, 1894 The Record and Guide reported that Liboritz was going ahead with plans to replace the house with a five-story apartment building; but he had changed architects.  Plans for the $20,000 structure were now underway, it said, by Schneider & Herter.


The architects were among the favorites of the German-Jewish property owners in the Lower East Side.  Ernest W. Schneider and Henry Herter would eventually design more than a hundred tenement buildings as well as commercial structures and two synagogues.


Their resulting five-story building would have been just another brick tenement had it not been for their exuberant terra cotta ornamentation.  Each red brick story was delineated by a contrasting stone course.  But elaborate terra cotta in the form of portrait panels, pediments and an explosive tympanum with a full-relief winged bust were more expected in a social or music hall than in an apartment building. 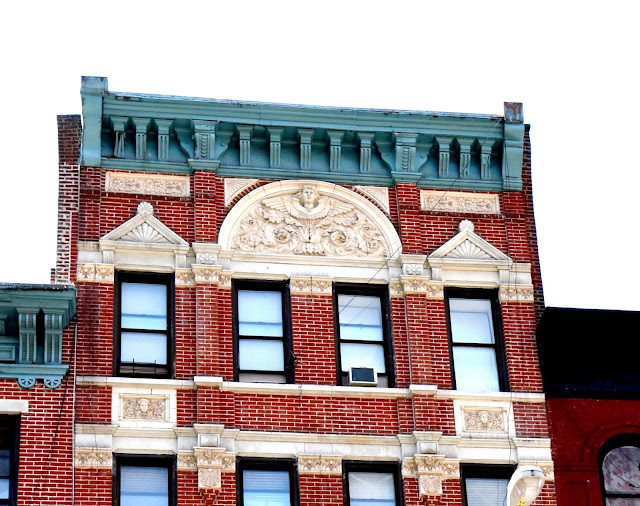 The overblown ornamentation disguised the meager means of the residents inside.  One of these in particular, however, would rise above his humble beginnings.


Rudolph Marks Rodkinson was born in Odessa, Russia in 1866.   At the age of 15 he moved to London and joined the Jewish theater, using the stage name Rudolph Marks.  The boy played with such famed Yiddish actors a Jacob Adler and Abraham Goldfaden.  Possibly through their encouragement—both of whom had found great success in New York—Marks arrived in the city four years later.


Now 19 years old, Marks succeeded.  The New York Times would later remember that he “appeared in productions in the old Bowery theatres with Max and Sophie Karp, Thomashefsky, Adler and Bertha Kalisch.”  He tried his hand at producing, as well, staging The Bowery Tramp at the Oriental Opera House.


But Marks felt he could better himself in his adopted country.   The year before Simon Liboritz completed his East Broadway apartment building Marks was studying law at the University of the City of New York.


In December 1893 the law student initiated his own legal battle—one which would result in a ground-breaking precedent.  Publisher Joseph Jaffa came up with a marketing ploy whereby he printed the photographs of university students then initiated a “voting contest to decide whether Marks was the most popular student.” 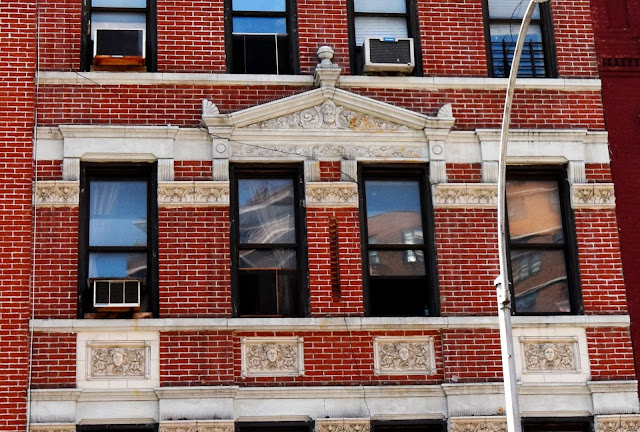 Marks, whom The New York Times described as “a Hebrew actor, at present studying law,” sued, saying that he had not consented to having his photograph published.   The Superior Court agreed.  Judge McAdam’s decision on December 29 ruled “No newspaper or institution, no matter how worthy, has the right to use the name or picture of any one for such purpose without his consent.”


Rudolph Marks was one of the first residents in No. 251 East Broadway.  In 1898 he was admitted to the bar.   His theater background proved advantageous to his new career.   Within months he was representing David Kessler, manager of the Thalia Theatre in his divorce case, and throughout the next decades many of his clients would come from the entertainment industry.


Marks’ hard work and determination resulted in an iconic American dream story.  Specializing in corporate law, he built up a sizable practice at No. 1440 Broadway.   By the time of his death in 1930 he and his family, including two daughters and a son, lived not in a five-story walk-up; but in a comfortable home in Cedarhurst, Long Island.  His son was studying medicine at Cornell University and one of his daughters had recently graduated from Barnard College.

Another Russian Jewish resident living at No. 251 when Marks first moved in was Dr. H. Solotaroff.   Many of the residents of the neighboring tenements were poor and ill-educated; a condition worsened by their inability to understand or speak English.


As the summer of 1894 approached, the Hebrew Institute at the corner of Jefferson Street and East Broadway initiated a program to educate mothers on the dangers of summer heat.  Thousands of circulars with the headline “Mothers!  It Concerns The Health of Your Children!  Come!” printed in English, Hebrew and Russian were circulated.   The fliers advertised upcoming bi-weekly meetings which, according to Leo Kohn, one of the association’s directors, are “to give the mothers of that neighborhood a general course of instruction upon the care and feeding of children during the warm weather, and particularly on the uses of sterilized milk and barley water.”


In order to communicate with the mothers physicians of various backgrounds were solicited.  Dr Solotaroff volunteered his time to instruct the Russian-speaking women. The first meeting, held on July 2, was a success.  The New York Times related that “the mothers listened intently to every word.  They crowded around the doctor after the lecture was over, and asked him a hundred questions.”  The newspaper projected that at the next meeting “there will be twice as many picturesque mothers and bareheaded babies present as there were yesterday.”


Despite Solotaroff’s selfless work among the impoverished community; his political bent may have alienated many.   An anarchist and sympathizer of the Russian Nihilists, he was active in the extremist political group.   Dr. Solotaroff was among the speakers at an Anarchist meeting on January 27, 1904 in New Irving Hall on Broome Street.


The Sun described the crowd of more than 500 saying “There were Russian Nihilists—several who have seen the inside of Siberian prisons—and there were Germans and Poles and Swiss and Jews, mostly be-spectacled, serious and grave, with not a single red shirt or cravat visible.”


Why the ideals of the group were distasteful to most New Yorkers was evident in the opening remarks of Johann Most, publisher of Die Freiheit, a revolutionary newspaper.  “In corrupt, degenerate America, I have suffered more than in Europe, and here it is necessary to keep up the fight even more than abroad, and it is in America that a paper like Freidheit is needed.”


The East Broadway apartment building continued to house immigrant families for decades.  In 1931 40-year old Louis Wolkofsky’s family lived in a first floor apartment.  With him, along with his wife, were 12-year old Anna; Esther, 9; Aaron, who was 8; and 4-year old Miriam.


The Wolkofsky apartment was located directly above the basement boiler room.   On March 17 that year Anna was sick in bed.  Suddenly the apartment was rocked by a tremendous blast.  The boiler below had exploded and a fire ensued.


Anna was thrown from the bed onto the floor and Esther was burned. When the police arrived they found Louis Wolkofsky on the floor unconscious and bleeding.   The entire family was removed the Broad Street Hospital for shock and injuries.


Although ten families were driven from their homes, badly shaken, the fire was extinguished and they were permitted to return later that day.  The Times reported “Little damage was done to the building other than the shattering of glass in the lower rooms”


Sadly during the latter 20th century the stoop and entrance were removed, replaced by a half-hearted attempt to disguise the alteration.  An industrial-type doorway was installed at the basement level. 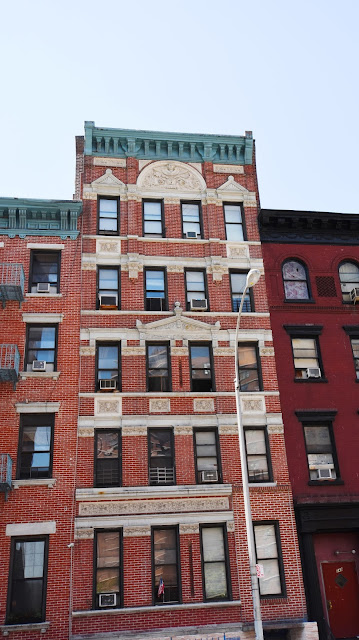 In 2002 and 2003 repair of the façade resulted in the extraordinary terra cotta work gleaming once again.   It unavoidably highlighted the lost entranceway and ungainly patching, as well; and included encasing the stone base in hideous faux-stone.   But despite the losses, Schneider & Herter’s design survives—a reminder of a time when some architects strove to give residential dignity even to those of meager means.