Life for James de Lancey Jr. was good in the 18th century—at least for half of it.   In addition to his elegant home in town, he owned land in Westchester County and a country estate north of the city.  His problems started when the seeds of revolution germinated in the 1760s.

Unwilling to choose a side, de Lancey straddled the political fence.  In 1768 he secured a seat in the New York Assembly by winning the support of the Sons of Liberty who rallied against British control.  In the meantime, he rubbed shoulders with the Crown, meeting secretly and assuring his loyalty.

It all ended badly for de Lancey in February 1775 when he was exposed as a loyalist.  By May he had been expelled from New York, never to return.

But before his world crumbled, he had lived the life of Manhattan aristocracy.  In the mid-18th century, he laid out an exceptionally wide drive through his estate—beginning at a formal square and running to the East River.  It was a stately lane that reflected his wealth and importance.

On March 6, 1777 the Provincial Congress appointed Commissioners to “take into their custody & possession all the personal property” of loyalists.  In 1785 all the de Lancey property was auctioned off—grossing about $50,000.  Beginning in 1810 deeds for building lots were sold along de Lancey’s broad lane—now called Grand Street because of its unusual width.  By the 1820s brick-faced Federal style homes appeared on the block of Grand Street between First Street (later renamed Chrystie) and the Bowery.

Among these was the free-standing house at No. 247.   Like most of its neighbors, it was two-and-a-half stories tall and clad in Flemish bond red brick.  One or two dormers would have penetrated its peaked roof.  The space between it and No. 245 next door was most likely a “horse-walk”—the passageways that led to the yards behind where small outbuildings or stables were located.

The width of Grand Street would contribute to its becoming a major shopping thoroughfare later in the century.  It appears that if No. 247 did not always have a shop on the first floor, one was in place by 1848.  J. D. Cromwell listed his address here when in November that year he was awarded a silver medal at the Fair of the American Institute for “best Boys and Children’s Clothing.”

The house, along with No. 245, became property of John Henry Heller.  The Heller family lived upstairs in No. 247.  John H. Heller and Anthony Imberry ran their watch and jewelry store at No. 231 Grand Street.  They had gone into business in 1837; but problems developed between the two which apparently resulted J. D. Cromwell now looking for a new store location.

On October 12, 1850 the New-York Tribune ran a notice that as of October 1, “the copartnership heretofore existing between Anthony Imberry & John H. Heller, watch makers and jewelers, is this day dissolved by mutual consent.”  The announcement told patrons that Heller would continue the business, now located at No. 247.

Meanwhile the Heller family continued to live in the rest of the house.  In 1857 John Henry Albert Heller, Jr. had enrolled in the introductory class of the New-York Free Academy.  He would be followed there by his brother, Charles Augustus Heller in 1869.  Charles enrolled in the “commercial class.”  William Heller appears to have been learning his father’s trade at the time.  In the meantime, Bayard H. J. Heller was drafted into the Union Army on March 30, 1865.

Heller offered more to his customers by leasing part of the ground floor to Isaac D. Noe’s silver plating operation.  Noe lived in Brooklyn and was working in the Grand Street space by 1873.  He stayed here for at least two years offering “silver-plating fixtures, &c.”

The electro-plating business sharing space with the jewelry store was run by H. B. Lubbert now.  In 1884 he advertised both gold and silver plating.

In 1881 Charles Heller was still living with the extended family upstairs. But after John Henry Heller moved his family to Brooklyn, at No. 493 Flatbush Avenue, in 1889, it appears that all the Hellers were gone for good from Grand Street.

John retained possession of No. 247 and it was about this time that the attic was raised to a full floor and the updated brownstone and pressed metal trim and cornice were installed.  The architect deftly disguised the addition with a bandcourse; however close inspection of the brickwork reveals the alteration.

Heller retired from the jewelry business and the store became home to J. Hess’s jewelry store.  Hess lived across the street at No. 276 Grand.  In 1892 he spent $500 on interior alterations designed by architects Horenburger and Straub.


Upstairs Alexander Straschum was living, at least from 1893 to 1895.  Exactly how he made his living is unclear; but in the summer of 1895 the Board of Aldermen resolved that he was “permitted to keep stand at No. 247 Grand street.”

In 1893 John Henry Heller, Jr. sold the building next door at No. 245 for a staggering $100,000, according to New York State court documents—nearly $2.7 million today.  The buyer, William Cohen, had occupied the property for two decades.  Heller continued to hold on to No. 247, however, and still owned it when he died in 1902.

By now, although H. B. Lubbert was still running his silver plating concern here, the Hess jewelry shop was gone.  It was replaced by H. Levy’s tailor shop.  On July 8, 1901 The Tammany Times reported that Levy “calls attention to the fact that he has completed arrangements with a large cloth concern for an unfadable Indigo blue.  Mr. Levy has for years made 50 per cent of the police uniforms in this city and therefore this statement should bear some weight.”

While Levy stitched together police uniforms, Lubbert had 19 employees in his silver plating shop—2 men, 16 women and one girl under 16 years of age.

The Grand Street neighborhood was drastically different from the time when John Henry Heller purchased No. 247 before the Civil War.  In 1912 when the estate of Mary A. Astor Woodcock had B. W. Berger & Son renovate the “3-story store and dwelling” with new walls and windows, the area had filled with Italian immigrants.  In 1939, as the city finally emerged from the Great Depression, The New York Times described the building as a “three-story tenement.”  It was sold that year for a mere $35,000.

The ground floor where gold and silver-cased watches had been sold for decades was now a restaurant run by the Marin family.  But Grand Street was on the verge of yet another change. 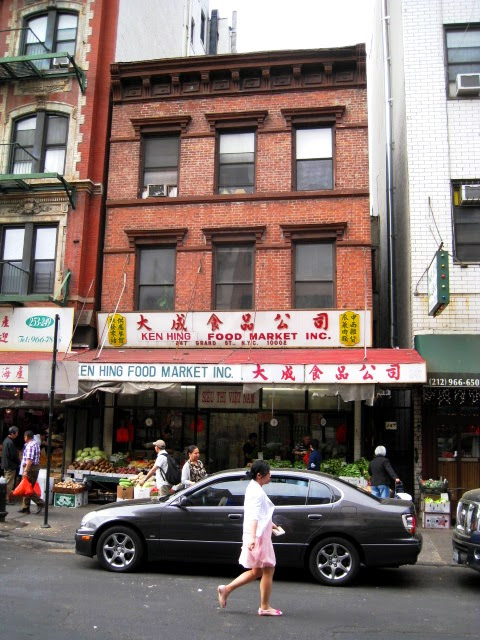 Chinatown was rapidly encroaching on the Italian district.  By the late 20th century the signs at street level were in Chinese, including those at No. 247.  Today a Chinese market operates here while upstairs, as has been the case since the Hess family left, small apartments are rented.  Overall, little has changed to the outward appearance of the unusual free-standing house since the late 19th century renovation.