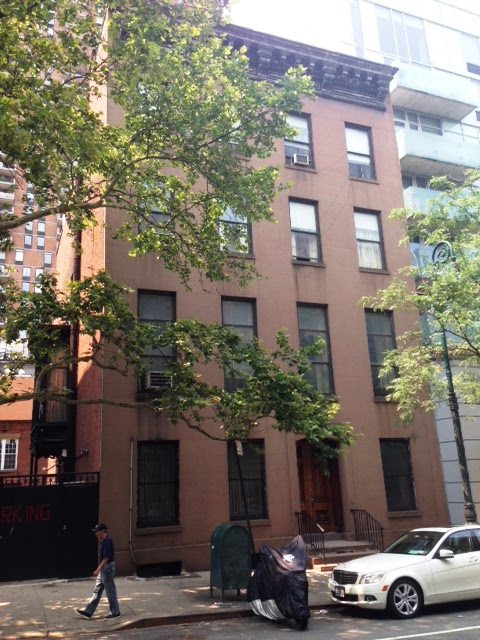 The block of West 44th Street between Ninth and Tenth Avenues was somewhat of an anomaly in the years following the end of the Civil War.    It was surrounded by the notorious Hell’s Kitchen neighborhood—blocks of dangerous slum infamous for crime, vice and hopelessness.

And yet here were rows of handsome brick and brownstone Italianate homes, many of them owned by physicians.  The double-wide mansion at No. 460 was separated from the row of houses on the southern side by a wide carriage drive that led to the private stables in the rear.  Unlike its neighbors whose parlor floors were entered above high brownstone stoops, the entrance of No. 460 was nearly at street level.

The brownstone-fronted residence was home to Henry A. Smith, his wife Rosena, and their three sons, Henry, Augustus and Oliver.  Born in England, Smith had come to New York as a youth and found a job with a wallpaper manufacturer named Jones.  Eventually he became a partner and the firm’s name was changed to Jones & Smith.

When Jones died, Henry A. Smith continued the business and built a large wallpaper factory on Tenth Avenue and 42nd Street, just two blocks away from his house.   But before long he would retire from active business.  The New York Times said “A few years after the war he sold out to Mr. Campbell, who had been one of his employes, and retired from active business.  He had by that time accumulated an ample fortune, and he thenceforth devoted his time to the management of his investments.”

The Smith boys were educated in the City College of New York.  Augustus was enrolled there when his spinster aunt, Hannah Maria Smith, died on February 19, 1878.  The funeral of the 69-year old woman was held in her brother’s 44th Street mansion at 1:00 on the afternoon of Thursday, February 21st.

Henry A. Smith’s retirement from the wallpaper business did not translate to inactivity.  In January 1886 Smith was elected a Director of the Tradesmen’s National Bank.  He eventually became one of the bank’s largest stockholders.   All wealthy New York City families left the city during the hot summer months for fashionable resorts or country estates.  The Smith’s maintained a summer home on Cayuga Lake in New York’s Finger Lakes district.

In the meantime, the Smith sons were doing well for themselves.  In 1890 Oliver was still attending New York City College; but Augustus had earned a civil engineering degree from the School of Mines, and Henry was an architect, temporarily running his business from the family home.

On Tuesday, July 21, 1891 Henry A. Smith suddenly died at the Cayuga Lake residence.  The New York Times reported “The cause of his death is not known here, but as he was an exceedingly hale and active man for his age, about seventy years, and was quite well up to last Saturday, it is supposed to be apoplexy.” (Apoplexy was the term most often used for what we now call a stroke.)

The first of the sons to leave 44th Street was Henry.  On May 28, 1898 Architecture and Building reported “Mr. Henry A. Smith, architect, formerly of No. 460 West Forty-fourth Street, announces that he has removed his office to No. 85 Nassau Street, New York.”

Only three weeks later, on Saturday, June 18, Rosena W. Smith died.  Her funeral was held in the house the following Monday.

By now Augustus was the senior member of the engineering firm of Augustus Smith & Co.  In May 1901 he was awarded the contract for erecting a new bridge across the Mott Haven Canal by Bridge Commissioner Shea.  Just two months earlier the Smith brothers had agreed to sell the family home.

The Real Estate Record and Builders’ Guide reported that the Young Women’s Christian Association had purchased the property on March 1 for $36,000.  The Association had maintained their West Side Settlement nearby at No. 453 West 47th Street since 1897.  It was founded “as a boarding house at low rates, which would be as a home under the care of a home-mother.”  It then branched out into settlement work in the neighborhood.

The New-York Tribune now described it as a place “where women find a congenial home at rates suited to their earnings.  Classes at nominal charges to fit young girls for self-support, a kindergarten, a library and a penny provident station, which has grown to be one of the largest in the city, are there carried on.  Mothers’ meetings to refresh and cheer the over-burdened women of that district have been established.”

The Association’s work in the disadvantaged neighborhood had been so successful that it required larger quarters.  The Tribune reported that in addition to the $36,000 the group had spent on the property (which it called “the old Smith mansion), “Four thousand dollars more will be needed for alterations, additional furniture, etc.”

A house-warming was held on the afternoon of April 24, 1901.  The New-York Tribune remarked that ”During the evening a number of the police force of the Forty-seventh-st. station called with their wives.  Tea was served in the assembly room on both occasions.”

The newspaper described the new arrangements.  “The house, formerly the home of the late Henry A. Smith, is a spacious mansion of the English basement type, four stories high and between thirty-five and forty-feet wide.  The two upper floors are fitted as sleeping rooms, and will accommodate twenty boarders.  Most of these rooms have been newly decorated and all are tastefully furnished with iron bedsteads and white dressers, washstands and chairs.  The floors throughout the house are of hardwood and are covered with rugs.  The bedrooms are arranged for from one to four persons.”

On the top floor was a “daintily equipped” infirmary; on the second were the parlor, house mother’s room, assembly room and a classroom.  The assembly room had a rolling partition which made it possible to divide the large room into two classrooms.  “During the morning this is occupied by the kindergarten, in the afternoon by classes and in the evening for clubs, entertainment, etc.” explained the Tribune.

The first floor held the dining room, another parlor, library (which consisted of an amazing 3,000 volumes) and office.  The women eyed the large Smith carriage house with eager anticipation of additional classrooms.

The West Side Settlement was supervised by the wealthy and unmarried Ada Laura Fairfield.  But a year after opening the 44th Street facility, she would move on to another project.  Every summer she took working girls to the country “in order to give them recreation, and at the same time an idea of country life of which they usually know so little,” as explained by The New York Times in May 1902.

But she found the places which she rented “more or less makeshifts.”  So in the spring of 1902 she purchased a large farmhouse outside of the village of Terryville.  The Fenn Homestead was built in 1784.  The New York Times reported “She proposes to make the old landmark a fresh-air home for the poor children of the west side New York.”  The newspaper added, “There, she says, she can give the working girls of the west side absolute rest during their two weeks’ stay.”

Another unmarried socialite, Alida A. Bliss, took over supervision of the West Side Settlement.   Christmas that year provided the perfect opportunity for the cooking classes to exhibit their skills.  “The jollity began with a gingerbread festival last week,” reported the New-York Tribune on December 15, 1902.  “Gingerbread hot and gingerbread cold, gingerbread by the loaf, by the cookie, by the wild animal, with bead eye and red flannel tongue, was served, plus accessories to the friends of the Settlement in general and the ‘Ada Laura Club’ in particular.  The senior cooking class cooked while the club received, and the ‘gingerbread hot’ was served ‘from oven to guest.’”

A few days later the Junior Cooking Class got its turn.  None of the girls in the class was over 10 years old.  The course—ten lessons long—taught girls the fundamentals of “plain cooking.”   The girls’ mothers were invited to the Settlement to sample the results.

Christmas week was filled with activities for all the “clubs” and groups associated with the Settlement.  Perhaps the most heart-warming of the activities, however, was the Christmas tree for the “outside poor.”  This year, however, the Y. W. C. A. feared it could not afford the gesture.

The Tribune described the “Outsiders’ Christmas tree” as a “festival for all in the neighborhood who had not been remembered through some church or other channel.  There are many of these; last year they ranged in age from five to seventy-two years.  An old woman of sixty odd wept like a child when a bright shawl pin was given her from the tree.  It was the first Christmas gift she had received for many years.”

The newspaper told readers on December 14 that the Settlement “fears this feature of its many activities must be omitted, unless some friend of the ‘outsiders,’ some one with five cents or $5, or their equivalents in dollies and candy and ‘Christmasness,’ who has a fellow feeling for those whom every one else has passed by, will let the Settlement know about it, and so fill this threatened void in the usual Christmas cheer.”

The newspaper’s plea was worded to pull the heart strings of turn-of-the-century readers and it worked.  On December 30 it reported “There was a Christmas tree for the “outside poor” last evening at the West Side Settlement.”   Readers donated $17 in cash and a box of toys, as well as a Christmas tree.  In an early example of environmental sensitivity, the Settlement advised “After the tree has served its purpose there it will be ‘passed on’ to the potting house, in De Witt Clinton Park, for the children of the Plant branch.”

In 1906 the Y. W. C. A. published the long list of the classes available at the West Side Settlement.  It included classes in embroidery, industrial arts, economic cooking, basketry, cord work, sewing, weaving, and “Mothers’ Meetings” where parenting skills were taught.

When the Y. W. C. A. raised a staggering $4 million in 1913, the Settlement received $50,000 for improvements.  The Association reported that “A gymnasium will be added to the present facilities which are entirely inadequate to the needs of the neighborhood.”

The Settlement could now add “physical culture” to its list of classes.  By 1912 it had added dressmaking, millinery, and Bible Classes to the list.  There were still boarding accommodations for “twenty-five self-supporting young women.”

When the Settlement purchased the Henry A. Smith mansion in 1901 the block was still an oasis among the tenements and ramshackle buildings of Hell’s Kitchen.  But a quarter of a century of change had taken its toll.  On Friday March 6 1925 The New York Evening Post reported that the Young Women’s Christian Association had received permission from Supreme Court Justice Erlanger to sell the property.

“It is set forth in the petition that the neighborhood in which the building is situated has changed so much since 1901, when it was bought for $36,000, that it has become inadvisable to continue its use as a boarding house.”   The Association sold put the property on the market for $43,000.

Today the Smith mansion is nearly unrecognizable.  The complex, bracketed cornice and the lovely paneled Victorian entrance doors are the sole surviving architectural elements.  The lintels were long ago shaved flat and the Italianate doorway surround was streamlined by the Y. W. C. A. which added an incised cross to the new keystone.  It nevertheless tells a vivid story of a time when reformers and social activists worked to improve the lot of the West Side’s poor.