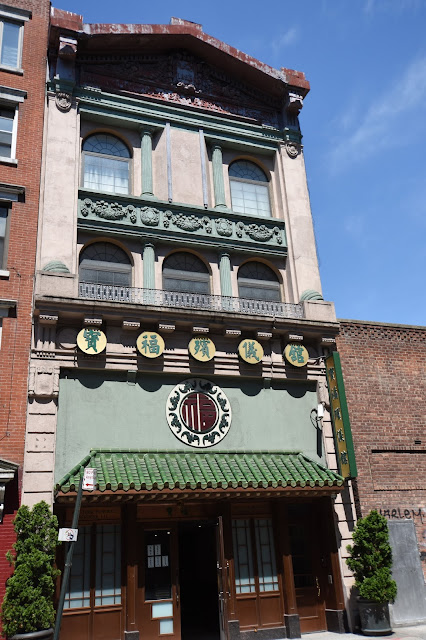 As the turn of the last century neared, the Lower East Side neighborhood around Canal and Ludlow Streets had filled with Jewish immigrants from Central Europe.  Many, if not most, of the new residents struggled financially.   In an effort to help their less fortunate neighbors, many local self-help organizations were founded.  Called landsmanshaftn, the organizations helped the new immigrants learn English, find housing and work, locate family or friends in the new country, and understand how to participate in the democratic process.

One such group was the Independent Kletzker Brotherly Aid Society, formed by a group of Polish Jews from the town of Kletz.  In 1891 they laid plans for a handsome dual-purpose structure for its headquarters at No. 5 Ludlow Street.

Six years earlier the site was occupied by a three-story wooden building that suffered a fire that year.   It was purchased by Patrick McManus of Bayville, New Jersey, who, along with partners Isaac and Emeline Carr demolished it for a five-story brick tenement, was completed in 1895.

The tenement would not last long.  In 1891 Jacob Postal purchased it for $36,000 and a transformation began.  In an interesting cooperative effort, the Cahen family simultaneously renovated its building at No. 41 Canal Street, another five-story structure.  On October 3, 1891 the Real Estate Record and Builders’ Guide reported that architect M. Muller had been commissioned to make “interior alterations and new front.”

Nearly forgotten now, Muller was active in the Lower East Side at the time, designing tenements and commercial buildings.  For the Independent Kletzker Brotherly Aid Society and the Cahen family he produced an L-shaped structure—joining the Canal Street and Ludlow Street structures at the rear.  The matching facades were an ebullient yet dignified mixture of styles. Neo-classical elements joined forces with Beaux Arts in elegant arched openings, an iron-railed balcony and a deeply-overhanging cornice. 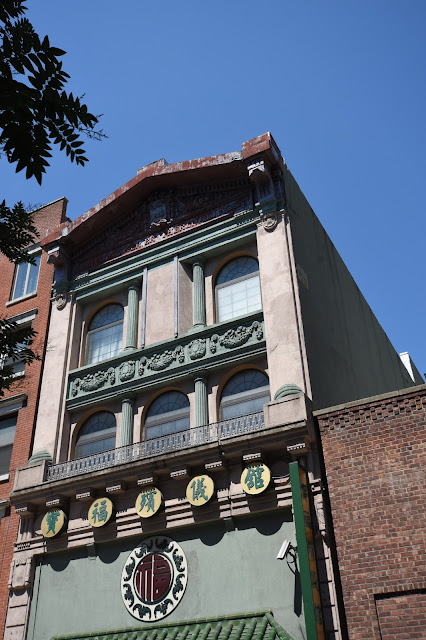 Although connected and identical, the two addresses were treated as separate entities.  The street level of No. 41 Canal remained home to Moses Cahen & Son, pawnbrokers.

In the spring of 1895 they became embroiled in a bizarre burglary gang run by a Jewish immigrant woman who arrived in New York from Ostrow, Poland in 1891.  According to The New York Times she had “been driven from her native country for teaching children to steal.”

Now the unnamed woman picked up her craft here.  She had as many as 40 young boys involved in her scheme.  Among the young men she coached in burglary was 20-year old Bernard Zuckerman.  His downfall came when he chose a most unlikely target—the home of his parents.

While Samuel Zuckerman and his wife were absent from their apartment at No. 71 East 109th Street on Tuesday April 30, 1895, Bernard forced open the front door and stole “three heavy silver candlesticks, worth $100; a gold watch, worth $75, and other articles of value.”

Apparently Bernard’s guilty conscious got the better of him.  He dropped an envelope into his parents’ mailbox the following day.  In it were a written confession and a pawn ticket from the Canal Street pawn shop for the candlesticks.

The Zuckermans had their son arrested, and Samuel Zuckerman demanded an explanation from the husband of the female Fagan.   The Times said “he made an acknowledgment of his wife’s criminal practices, saying that he could not prevent them and was compelled to endure them, because he could not get work, and was obliged to submit or be turned into the street.  The man said his wife had the watch that young Zuckerman had stolen from his parents.”

A court order resulted in a return of the candlesticks and the pawnbroker Chahens were out their money.

Upstairs at the time were the headquarters of the Tenth Ward Athletic Club.   On October 21, 1896 an enormous political parade was held in support of William McKinley’s Presidential run.  The New York Times predicted “Butchers in their frocks and with their cleavers, bakers wearing their square caps, pushcart men with their carts, barbers, dentists, everybody mechanical, will march with the tools of his profession.”

The men of the Athletic Club would lead the parade.  “Three hundred men, mounted on the finest steeds that ever came out of street-car stables, will lead the procession, the Tenth Ward Athletic Club of 41 Canal Street.”

Moses Cahen & Son found themselves on the losing end of the pawn broking business again in 1898.  Brooklyn contractor George Fruh received the lucrative contract to lay the new Shore Road Drive in 1897.  But, according to The New York Times on January 2, 1898, “He has been losing money lately, and some time ago was obliged to hypothecate his collection of jewelry with Moses Cahen & Son, money lenders, at 41 Canal Street.”

On December 17, 1897 Moses Cahen traveled to Fruh’s office at No. 44 Court Street in Brooklyn.  Fruh acted surprised and said he had been misunderstood.  He said he had agreed to provide notes, not checks.  Since the man had done business with the pawn shop before, Moses Cahen did not doubt his word and handed over the jewels.

Moses Cahen’s son was less trusting.  When he heard of the transaction, he immediately rushed to Brooklyn.  But the contractor had disappeared.  On December 31 the Cahens filed for a warrant for Fruh’s arrest. The New York Times reported “Meanwhile it became known that Fruh’s affairs were tangled in other directions.”

It was not until January 6 that George Fruh, having hidden out for nine days, was found and arrested by detectives.  He was charged with grand larceny; but the Cahens’ chances of recouping their losses seemed dim.  The Times said “Fruh’s affairs are badly involved.”

The pawnshop was replaced in the first years of the 20th century by Nathan Goldman’s dry goods store.  Goldman was minding his business on the night of February 22, 1909 when, unknown to him, a racially-charged confrontation was taking place outside.

The New York Times reported the following day that “A crowd of men and boys followed four or five Italians along Canal Street last night at 10:20 o’clock, tormenting them by calling them ‘Waps’ and “Ginneys.’  Finally near Orchard Street the Italians turned to fight.”

To Goldman’s astonishment, part of the gang “surged” into his store.   Three shots rang out, one of which hit Nathan Goldman in the right leg.  Outside more shots were fired, one hitting the right thigh of mail clerk Joseph Lispy.  Before the police could arrive the crowd had vanished and no arrests could be made.

Later that year, after owning the property for 43 years, the Cahen family sold No. 41 to Max Kobre.  Kobre ran an independent bank directly across the street at No. 40 Canal Street.  He announced his intentions to “erect a four-story building on the lot” for his banking business.  Instead, however, he renovated the existing structure.

In the meantime, the role of the landsmanshaftn organizations in New York was becoming diluted.  Second generation citizens felt less connection to their homelands and were less inclined to participate in the organizations.  The Independent Kletzker Brotherly Aid Society would not survive much longer on Ludlow Street.

In October 1911 Max Kobre purchased No. 5 Ludlow Street.  “This building will be used, after being rebuilt by the bank, as an addition to its present quarters,” reported The Times.  Kobre’s renovations to his new annex maintained the matching facades and the old Brotherly Aid Society’s name was preserved below the cornice.  Kobre replaced the tin roof at the time, spending a considerable $50,000 on the project.

In 1914 private banks like Kobre’s were in trouble.  With the outbreak of World War I the first great financial depression of the 20th century threatened—even the New York Stock Exchange was closed.  The Government acted rapidly, citing the 1908 Aldrich-Vreeland Act which allowed national banks to issue emergency currency.  But private banks, called by the State Banking Department “weak spots” were being “eliminated.”

On August 5, 1914 The New York Times reported that Max Kobre’s Bank had been shut down.  Superintendent Robert of the State Banking Department said the action “was taken with the knowledge and approval of the owner, Max Kobre, and to safeguard the interests of depositors and conserve the assets.”   State Bank Examiner George V. McLaughlin said Kobre’s bank was “in an unsafe condition to continue business.”

Although the closure was initially thought by Kobre to be temporary; on August 18 he was served with a petition in bankruptcy.  As it turned out, the failure of the bank was more tragic for at least one depositor than it was for Kobre himself.

Morris Ludmire was a 35-year old tailor.   He supported his wife and five small children and his life savings had been held in Max Kobre’s bank.  On December 15 the desperate man jumped in front of a Third Avenue elevated train at the 99th Street Station.   When his wife was told of his suicide, she became hysterical and “told the police that Ludmire had become despondent because of the loss of $1,500 when the bank of Max Kobre, at 41 Canal Street, failed a short time ago."

On August 17, 1915 two grocery stores opened—Louis Cutler’s on the Ludlow Street side and Aaron Saland’s on Canal Street.  While the two men were partners—each paying Max Kobre $100 a month rent and sharing expenses—they withheld this fact from their customers.  It resulted in a 1917 law suit accusing the men of taking advantage of the Jewish community by raising the prices of citrons and other necessary items for the Jewish holidays.  One store would advertise in Jewish newspapers, but the other’s “lower” prices would seem a bargain.  All the while the pair was price-fixing and gouging the often-needy customers.

By 1922, although it was still referred to as the Kobre Bank Building, the former banker had lost the property to the Maryland Casualty Insurance Company. In February that year the 41 Canal Street Corporation purchased it for $75,000.  When it was resold only three months later, its tenants were apparel firms.  The Shradnik Weiss retail clothing store operated here, as did United Clothiers, an apparel manufacturer.

In the late 1920s the former Independent Kletzker Brotherly Aid Society side was the headquarters of the International Bakery and Confectionery Workers Union.  The group brought rye bread production to a near standstill in May 1927 when bread bakers walked off the job at 16 bakeries in Manhattan and the Bronx.  Only an injunction from Justice Callaghan kept two Brooklyn bakeries open and New Yorkers supplied with rye bread.

The combined buildings were sold three years later, in January 1930 and leased in September that year to the Zion Funeral Parlors, Inc.  The Jewish funeral home paid an annual rent of $3,500 for two floors.

Slowly change occurred in the Canal Street-Ludlow Street neighborhood.  By the last decades of the century the Chinese population had nudged the Jewish residents out.  By 1993 the Zion Memorial Funeral Home was replaced by the Hong Kong Funeral home; taken over by the Boe Fook Funeral Services in 2004.

Today Boe Fook Funeral home still operates from the building.  The lower floors have been altered to reflect the Asian business; but the two upper stories survive essentially intact.

Email ThisBlogThis!Share to TwitterShare to FacebookShare to Pinterest
Labels: chinatown, lower east side