"Prostitutes and Thieves" -- No. 70 Prince Street


The neighborhood around St. Patrick’s Cathedral on Mulberry Street, completed in 1815, was filled with a mix of residents in 1827.  It was about that time that Patrick Sherryd erected his brick home at the corner of Prince and Crosby Streets.   Unlike the refined mansions that would soon rise on nearby Bond Street or Astor Place, Sherryd’s three-story home was middle-class.  Faced in Flemish-bond red brick, it rose to a simple wooden cornice below a shallow hip roof with tiny dormers.

The 14th Ward, in which No. 70 Prince Street sat, was undergoing tremendous development at the time.  And it would not be long before the neighborhood would experience drastic change.   By 1856 an extension had been added to the rear of No. 70 Prince and, apparently, the first floor already converted for business.  The residential space above was now accessed by a side door at No. 105 Crosby Street.

Among those living upstairs that year was John Boyle, who taught in the Boys’ Department of Ward School No. 4 on Marion Street, near Prince.   But the shadier character of some of the residents was reflected in the arrest of Alfred Howard on July 26, 1867 during a raid on “policy” dealers.   Policy rackets were a version of a numbers game or illegal lottery that preyed on the desperate poor.   Police Officer Lacy of the 14th Precinct charged Howard with running a policy game, “he having purchased a ‘policy’ ticket from Howard for the sum of four cents,” reported The New York Times.

The difficult conditions of the impoverished tenants resulted in the death of 49-year old Henry Blesses on June 29, 1869.  Described as “a German,” by The Times, he died suddenly in his room, “supposed to be the result of the heat.”

Whatever the original business on the ground floor was, by the time of Blesses' death, it was a saloon operated by John Shewell.  In January 1869 he was charged with violating the liquor law.

Soon the Prince Street saloon was being operated by Alderman Patrick Napoleon Oakley, in addition to another at the corner of Canal and Mott.  In 1879 Jim Poole shot Pat McGowan here, landing him in Sing Sing for ten years.

The outspoken and colorful Oakley was a member of the Marion Club, a political group with ties to Tammany Hall.  He leased space to the club upstairs.    In 1880 it was also being leased to the Metropolitan Hancock and English Campaign Club.

Oakley partnered with another Assemblyman in the operation of the saloon.   James Edward Power was born in New York of Irish parents on May 15, 1850.   A self-made man, he attended public schools and Cooper Union before working in a machine shop as a pattern maker.  He was married in 1873 in the Mott Street cathedral to Mary Louise Donohue and the couple had two children.

In 1886 the City Reform Club wrote of him, “He now keeps a liquor-saloon at 70 Prince St.  This saloon has many thieves and prostitutes among its customers.”  The organization disapproved of his profession saying “As a legislator, Mr. Power was not as useful or as harmful as he might have been.  If he can be commended in the least, it is because some of his colleagues were apparently much more corrupt.  He was as unfit for the place which he held as any keeper of a low saloon must be…He was controlled by the bosses in New York City.”

The New York Times accused him of hiding his partnership in the saloon.  On October 24, 1886 it reported that he “sells ales, wines, beers, and spirituous liquors in Prince-street.  He conceals the fact from his friends in the country by telling them in his biography, printed in the Albany Political Almanac, that he ‘is now interested in the hotel business.’  He tells them also in the same article that ‘he is descended from one of the best families of Ireland.’”

The year following the scathing remarks, Oakley and Power replaced the saloon front.  The new street level façade included cast iron columns and a large window.  But later that year Power would have other things to think about. 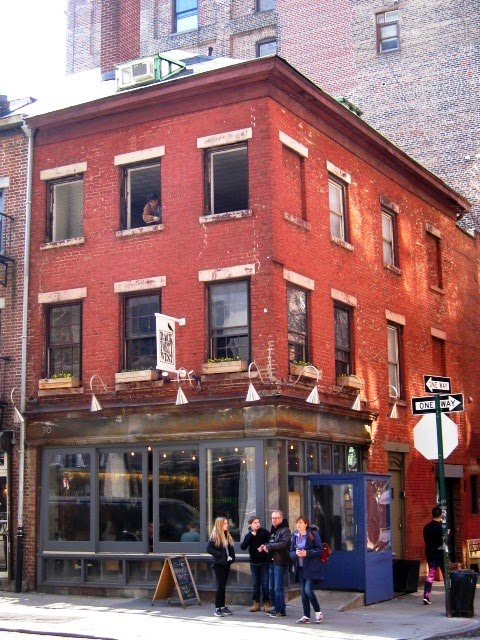 On October 19, 1887 The New York Times wrote “Assemblyman James E. Power has got himself in trouble.”  Power had for years been a friend of Richard W. Conroy who ran a Sixth Avenue saloon.  The newspaper said Conroy “lived with his wife at 116 Waverley-place happily enough until May 30 last, when, coming home later than usual from his club, he found Power in the bedroom with his wife, Mary Louise Conroy.”

Saying “Power keeps a saloon at Prince and Crosby streets,” The Times reported that Conroy had filed suit for $20,000 in damages against the assemblyman.

During the campaign of 1890 Oakley openly served liquor on Sundays as part of his campaign.  On Monday November 3 that year The New York Times reported:

“There was a strong smell of fresh varnish yesterday in the demure white saloon of Alderman Patrick Napoleon Oakley at 70 Prince Street, and the floor was shiny in spots, as though in course of preparation for a ball.  The blinds were discretely drawn, but the two back doors swung noiselessly on their hinges and the beer pump beat the record of the old oaken bucket long before the day was over.  A policeman hovered near, but he devoted his attention to a gang of wicked small boys.  Two bartenders were on duty all day, and the saloon was a least half full of people nearly all the time.

“Alderman Oakley was on hand, and he held frequent consultations with his visitors on the subject of the election.  Some campaigning was also in progress, and there was a noticeable proportion of young men, some of them mere lads, among the patrons of the bar.  Up stairs, the ‘Marion Club’ was in session.”

The New York Press had a decidedly different opinion of the Assemblyman.  Following the election that year, it said he “came to the rescue of his constituents like the refreshing shadow of a rock in the great desert where cooling waters are to be found…He is a native of Ireland, 43 years old, and a thorough American.”

The danger of burglarizing the business of two politically-connected men did not deter two thieves on March 23, 1891.  The Evening World reported “Thomas Kilimet and Thomas Sheridan were caught breaking into Alderman Oakley’s saloon, on Prince street, at 2:30 this morning, and were held at the Tombs Court.”

Patrick Napoleon Oakley was home at the time, suffering from a severe cold he had caught two days earlier.  It quickly developed into pneumonia and he died just after midnight on March 26, 1891.  The World was glowing in its recap of his political accomplishments and focused on his prominence in the Ancient Order of Foresters, his memberships in the Knights of St. Patrick, the Marion Club, and the Catholic Benevolent Legion.  The newspaper only briefly mentioned “He was the owner of two saloons, one at Canal and Mott streets and the other at Prince and Crosby streets.”

The saloon business was taken over by H. D. Dircksen and, apparently, his son A. E. Dircksen.   They continued on here at least until 1905.

The heavily-Irish neighborhood saw the influx of Italian immigrants in the last decade of the century and in 1899 Antonio Sciarra received approval to run his fruit stand on the Crosby Street side of the building.  Two years later Guisseppe Porfillio replaced him with his own fruit stand there.

As the 20th century progressed and the neighborhood changed, the upstairs remained residential.  In 1922 A. Solomon, who was in the silk business, lived here with his family.  They were still here in 1935 when son Lester passed the New York State bar exam.

By 1982 the former saloon space had become The Crosby Luncheonette.  The restaurant would have an ongoing and unhappy relationship with the Department of Health.  In March 1982 it reopened after having been closed down for health violations.  It was shut down again in September that year; reopened in October; and was closed again in June 1983.

It became the Rodriguez Restaurant which, like its predecessor, was closed by the Department of Health in June 1984; cited again in 1985 and again in April 1986.

But in 1990 the Soho neighborhood was seeing a rebirth as galleries opened in its vast cast iron structures.  Trendy shops and restaurants opened, including Savoy at No. 70 Prince.   The American-Mediterranean bistro was as popular destination for over two decades.  The second floor was converted to a dining room, while the uppermost floor was listed in Building Department records as a “one family home.”

Then in June 2011 owner Peter Hoffman served the last dinner here with an $85 five-course menu.   If fans of Savoy were concerned about what would take its place here, they were relieved less than a year later when, on February 29, 2012, Peter Hoffman announced he would open a version of his East Village restaurant, Back Forty, here.  Called Back Forty West, its glass and metal store front cleverly exposes the cast iron column that survives from Oakley’s and Power’s 1887 renovation.

Surrounded by 19th century factory lofts, No. 70 Prince and its contemporary next door, are unexpected survivors.  That the uppermost floor has never been used for other than residential use after nearly 200 years is rare indeed.

non-credited photographs by the author
Posted by Tom Miller at 3:18 AM