The Little Holdout at No. 461 7th Avenue 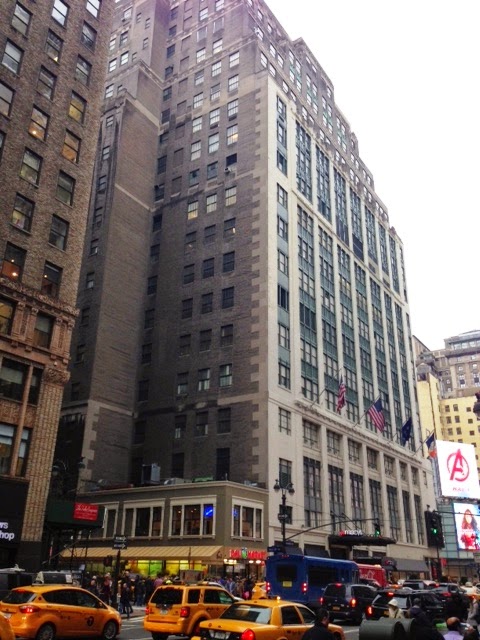 In the years just prior to the outbreak of civil war, modest homes and stores were erected in the area that would a century later become New York’s Garment Center.  On the corner of Seventh Avenue and 35th Street a four-story brick dwelling appeared which most likely always had a commercial space on the first floor, numbered No. 461 Seventh Avenue.  The residential floors above were accessed by a side door at No. 168 West 35th Street.

In 1860, an article titled “An Astrological Neighborhood,” in Broughton’s Monthly Planet Reader mentioned “About Twentieth street and Seventh avenue are clustered a galaxy of astrologists and clairvoyants.”  Among the seers it listed was Professor Nelson, at No. 168 West 35th Street.

It would appear that already the upper floors were operated as a boarding or lodging house.  (The difference in the two were the meals offered in boarding houses; cheaper lodging houses rented only rooms.)  In 1862 veterinarian William Bretherton listed his practice here.  At least by 1876 Frederick Trope ran his grocery business at street level; while among those living upstairs that year was James Hoey, a clerk, Patrick Gillespie, who was a plumber with a business at No. 629 Sixth Avenue, and Frank Gillespie.

Frank Trope’s grocery store would continue into the 1890s while he, too, lived upstairs.   By 1900 the business was taken over by F. W. Jaeck, who listed himself as a butcher.   By now the extended neighborhood had degraded into one of crime and vice—known as the Tenderloin.   Social reformers preferred the name “Satan’s Circus.”  Its streets were lined with brothels, saloons, and illegal gambling parlors; and corruption among the police was rampant.

The character of the neighborhood was reflected in the lodgers who took rooms at No. 168 West 35th Street.   One was 22-year old Charles Smith who was wanted by the Providence, Rhode Island police for burglary in 1904.  Acting on a description supplied by the Providence police, Detectives Boyle and Charlton recognized Smith “trying to dispose of some jewelry in a pawnshop in the Tenderloin, and followed him to a saloon in Seventh avenue,” as reported by The Sun on May 13, 1904.

The saloon sat at the corner of Seventh Avenue and 27th Street and it was around 4:00 in the afternoon when the officers attempted to arrest Smith.  According to The Sun, Smith was asking for a package he had left with the bartender when they made their move.  It resulted in what The New York Times described as “a terrific hand-to-hand struggle, in which both the prisoner and captors were badly battered.  The man fought furiously with a slungshot, and his head seemed impervious to the blows rained upon it by two revolver butts.”

Two gold watches were found on Smith, matching the description of the watches stolen in Rhode Island.  “The bartender in the saloon gave the detectives a box which he said had been left there by the negro.  This was opened at Police Headquarters and found to contain jewelry, gold bracelets, gold chains and other stuff,” wrote The Sun.  Smith was accused of entering four houses in Providence on the night of May 7 and making off with $5,000 worth of jewelry—a haul worth about $135,000 today.

At the time the lodging house was run by Michael J. Ward, who was visited by investigators in 1907 checking on voter fraud.  It was a common practice for political groups to pay indigent men to vote for their favorite candidates, while giving lodging houses as their addresses so they cast votes in various wards.

Three years later it was Lawrence J. Collins who was listed as the lodging house operator.   The former grocery store was now a saloon, run by Michael J. Collins, presumably a relative.  In 1912 violations resulted in Collins losing his liquor license.

The garment and millinery industries, long centered around Broadway below 14th Street, were inching closer to No. 461 Seventh Avenue.  The change in the neighborhood was accelerated when Rowland H. Macy surprised New Yorkers with his announcement in July 1901 that he was abandoning 14th Street.  He planned to build a gigantic new store on 34th Street, running through to 35th Street along Broadway.  The nine-story structure would be a commercial phenomenon.

Diagonally opposite No. 461 Seventh Avenue, on the southwest corner of 34th Street and Broadway, sat a similar structure.   Henry Siegel, owner of a major competitive dry goods store, had discovered Macy’s plan before he had a chance to buy up all the property.  Siegel outbid Macy on the corner lot, paying $125,000.  Undeterred, Rowland Macy built his mammoth department Store around the stubborn holdout.   It was a frustrating situation that would repeat itself before too long.

In June 1917 Margaret D. Thomas purchased “the four story building” on the Seventh Avenue corner.   Five years later, on August 5, 1922, the Real Estate Record and Builders’ Guide reported that she had leased the entire structure “with stores” to Philip Mangone at an annual rent of $12,000.

The following year “because of increased volume of business,” women’s clothing manufacturer Eddie Kahn moved into the building.  He was still here as late as 1925.

In 1924 Macy’s expanded, opening the “West Building,” increasing its selling space to 1.5 million square feet.  Five years later, in September, it announced it would expand again.  The store purchased a three-story and a 16-story structure on Seventh Avenue and negotiated for No. 461.   Margaret D. Thomas, perhaps holding out for more money, declined to sell.  Once again Macy’s found itself building around an annoying corner building that refused to budge.

By now the Garment Center had completely engulfed the area.  .  Religiously observant Jewish workers were faced with a problem.  Living in Brooklyn or, in some cases, as far away as Long Island, they needed a local synagogue for daily minyan—prayer services—or for the prayers for the dead recited during the week.

The Garment Center Congregation was formed in 1932 and No. 461 was heavily converted.  It was reduced to two stories—stores on the sidewalk level and the synagogue on the second floor.  In April 1935 it expanded its services by organizing a “sisterhood.”

On November 10, 1944 the congregation approved plans “for the erection of a Jewish community center and a new synagogue to replace the present quarters at the corner of Seventh Avenue and Thirty-fifth Street,” as reported in the Canadian Jewish Review.   Max A. Drusin, president of the congregation, estimated the cost of the structure to be half a million dollars and told reporters that “four locations are under consideration.”

Fund raising within the garment district began almost immediately.  But it would take two decades for the necessary capital to be raised.

In the meantime on the first floor by 1946 was the J & S Cigar Store, run by Joseph Sturenthal.   The store doubled as a luncheonette and soda fountain, with as many as eight counter clerks during the noon lunch rush.  Still here in 1977, The New York Times said of the cigar store:  “Fronting as an egg cream luncheonette, J & S nonetheless claims to have the largest humidor in the country.  Bob Sheer, the manager, says a box of Dominican Primo Del Rey, from $10 to $27, is always safe.”

By the time of The Times article, the Garment Center Synagogue had erected its new structure and moved.  At 2:00 on October 28, 1965 a procession moved up Seventh Avenue to No. 205 West 40th Street.  “The Torahs were followed by 50 members of the congregation and a small band that played sprightly hora dancing tunes,” reported The Times. 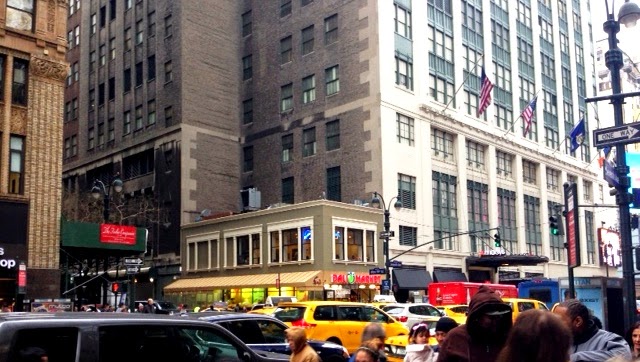 Much altered, the venerable and unnoticed building’s colorful history includes a brief appearance in the 1992 motion picture Bad Lieutenant.  It was the location in the movie where actor Harvey Keitel, as the police lieutenant, sorts out a robbery.   Now, home to a delicatessen and grocery (just as it started out), the little David still stubbornly hunkers below Macy’s Goliath.