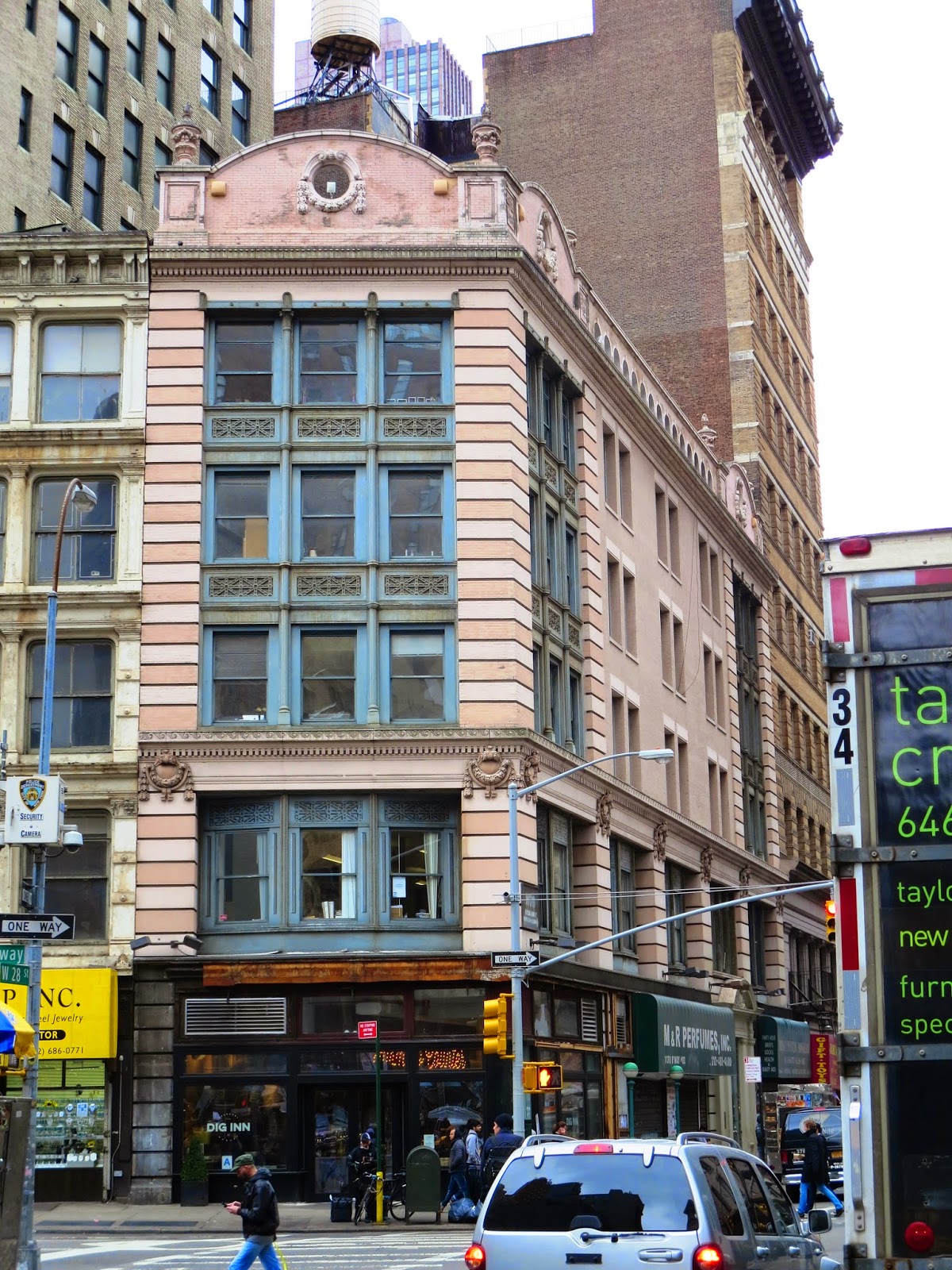 By the time of the Civil War the once-respectable residential neighborhood around Broadway and 28th Street had degraded.  Saloons and gambling parlors defined the area which would in later years be known as the Tenderloin.  Thomas Thornton ran a saloon at No. 1178 Broadway in the first floor of an old brick-faced house.  When the infamous Draft Riots broke out in July 1863 in response to the unfair military draft lottery Thornton’s saloon would become a target.

For three days terror reigned in New York City with carnage and destruction unlike anything seen in the country before.  Innocent people were murdered, and draft offices, newspaper buildings and the homes and neighborhoods of the black population were burned.  When the mob moved up Broadway to 28th Street, the grocer across the street from Thorton, Richard Murphy, passed out free whiskey to appease them—a full 19 gallons in all.  But, according to Adrian Cook in his The Armies of the Streets: The New York City Draft Riots of 1863, Thomas Thornton was less lucky.

“The mob broke in, drank al the liquor in the bar, carried off the kegs and demijohns full of alcohol, and robbed him of $200.”  Thornton’s loss in cash alone would be about $4000 today.

Efforts of reformers and politicians like Police Commissioner Theodore Roosevelt made a change in the Tenderloin in the last decade of the century.  In 1891 H. Phillips, listed as an “importer and tailor,” ran his business from No. 1178.  History and Commerce of New York, 1891 said “Mr. H. Phillips is a gentleman of German birth, and for a number of years a resident of this city.”  Meanwhile, the Gaelic Society and the Municipal Council of the Irish National League leased rooms upstairs for their headquarters.

Broadway by now boasted numerous handsome hotels and respectable businesses were moving in to the area.  On July 13, 1901 the Real Estate Record and Builders’ Guide reported that change was about to come to the corner of Broadway and 28th Street as well.  Elias J. Herrick had commissioned architects Clinton & Russell to design a five story brick and stone “lofts and stores” building costing $80,000.

Herrick’s family had been in American since before 1653 when Sir William Herrick was first mentioned at Beverly, Massachusetts.   William Herrick’s son, Joseph, settled around New Amsterdam, where he married Margaret Hicks of Long Island.

Two and a half centuries later Elias J. Herrick had garnered a fortune as one of the leading producers of flour in the United States.  Heavily involved with charities and philanthropies, he now turned his attention to real estate development.

He demolished the two brick houses at Nos. 1178 Broadway and 17 West 28th Street for his new commercial building.  His architects were busy men at the time.  Concurrently they were working on the Graham Court Apartments, the Broad Exchange Building downtown, the American Exchange National Bank Building, the 18-story Atlantic Building and the Astor Apartment building.

For Herrick they designed a five-story Beaux Arts structure that used a mix of materials—terra cotta, brick, limestone and cast iron.   The banded limestone piers of the two-story base continued up the Broadway elevation and at the eastern end of the 28th Street façade.  Above the second story cornice on 28th Street the central section was faced with beige brick—a significant cost savings to Herrick.  Only in this section were the openings not framed in cast iron, with ornate spandrels, engaged columns and, at the second story, angled bays.  Festooned cartouches crowned each pier above the second floor where a delicate wave crest design finished off the cornice.  Above it all a fanciful parapet with festooned oculi, urn-topped pedestals and a shallow arcade along 28th Street sat like a diadem. 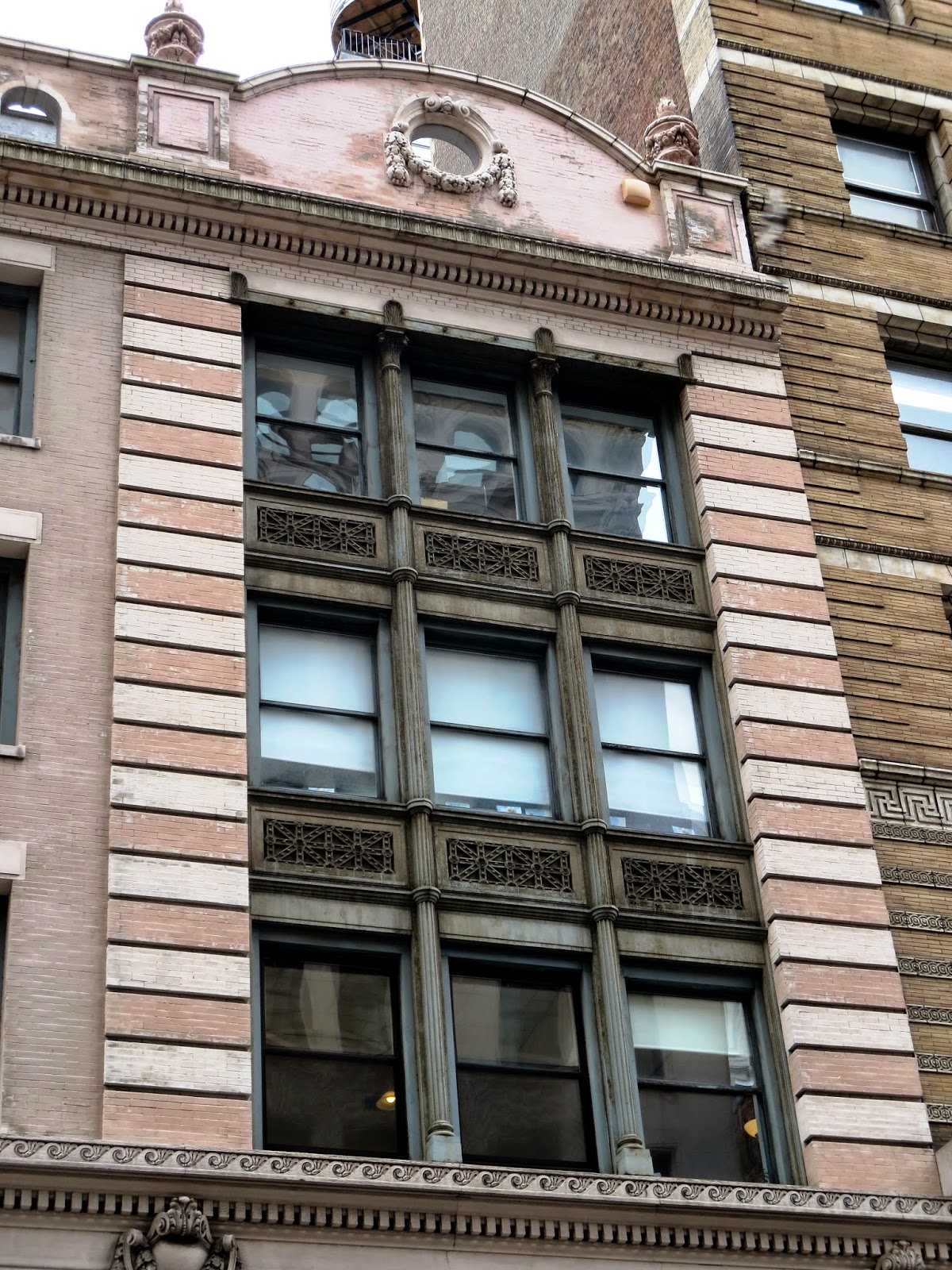 The family tie to Margaret Hicks was never lost among the Herricks.  Elias’s son bore the name Edward Hicks Herrick.  The new building, completed in 1902, was christened The Hicks Building.  Herrick’s first tenant was perhaps his most important.  The Evening Post Record of Real Estate Sales reported in February 1902 that the Corn Exchange Bank had taken “the ground floor of the new Hicks Building, at the northeast corner of Broadway and Twenty-eighth Street.”

J. F. Reinhardt was among the earliest tenants in the upper floors.  Turn of the century wardrobes involved traveling clothes, visiting clothes, business attire, evening wear, sports outfits, and a host of other categories.  The closets of even the wealthiest were taxed with the amount of clothing.  Reinhardt offered a solution by storing and maintaining seasonal apparel.  An advertisement in June 1903 in the New-York Tribune offered “gentlemen’s clothing taken care of and stored for the season.”

In the days before electric refrigeration hotels, restaurants and homes were faced with another necessity—ice.  The American Ice Company moved into No. 1178 Broadway.  Run by Wesley M. Oler, the successful firm was targeted by Attorney General Julius M. Mayer for running an “Ice Trust” and price fixing.  On December 21, 1906 the New-York Tribune explained that through its manipulations, the firm increased the price of ice from rivers and ponds from $1.20 a ton to ten times that much.  “It is said that by the time the ice reached the poor customers of these pushcart dealers it cost them at the rate of from $10 to $14 a ton.”

On December 20 Wesley M. Oler was served in his office at 1178 Broadway with a copy of the charges.  Oler said the charges were baseless and had no statement for reporters “except to say that Mr. Mayer probably thinks his explanation of his action from his point of view is correct.”

At the time that Wesley Oler was planning his defense the building was home to several travel-related agencies.  Leon H. Cilley placed an alluring advertisement in the June 1906 edition of The Four-Track News-An Illustrated Magazine of Travel and Education. Representing the Maplewood Hotel in Maplewood, New Hampshire, he marketed it as a “Social and scenic center.  High altitude.  No hay fever.  Superior 18-hold golf course.”

S. E. Churchill offered competition and in June 1906 advertised accommodations at several resorts, including the sprawling Hotel Hamilton.  That same month The Mathewson resort hotel published an advertisement in the New-York Tribune.  Like Churchill and the Maplewood, the Mathewson’s New York office was in the Hicks Building.  The ad boasted modern improvements over the past season.

Spring waters at summer resorts was rapidly becoming a marketing tool.  Another agent in the building was taking advantage of that draw as well.  Hiram Ricker & Sons were the agents for the Poland Spring hotel and resort.  Poland Spring would remain in the building for years; by 1916 focusing more on its bottled water than the resort business.

A related firm was The Travellers’ Company.  It, too, would be here for several years, offering travel tickets, hotel and resort and restaurant recommendations for vacationers.  And Mabie & Gillies, who started out offering “private funds for private house mortgages and centrally located business property loans,” would also stay on.  By 1908 the firm, now known as Webster B. Mabie & Co. was dealing in commercial real estate.

New York’s apparel and millinery business would, for the most part, bypass No. 1178 Broadway.  One exception was the high-end men’s hat manufacturer Hawes von Gal.  With factories in Danbury, Connecticut and Niagara Falls, Canada, the firm boasted in 1912 “Best made and best known is a strong combination.”  Its popular bowler in 1913 retailed for about $75.00 in today’s dollars.

In the building with Hawes at the time were the Amsterdam Advertising Agency (which included Poland Water on its list of clients); A. H. Rice Co., “manufacturers of sewing silks and braids at Pittsfield, Massachusetts;” the Arizona-based Pioneer Mining & Smelting Co.; and real estate agents M. Rosenthal Co. (which signed a lease in 1916) and M. L. Harris.

In October 1917 the estate of Elias Herrick commissioned architect I. E. Denslow to do “alterations” on the building.  Details of the $4,000 in improvements are unclear; however they most likely focused on modernizations inside.

The smattering of apparel firms in the building by 1920 included the Imperial Cloak Company and A. Kandel’s silk manufacturing operation.  On Friday November 25, 1921 Kandel ran into trouble while heading home to Brooklyn.

He and his wife were to attend a social function so Mrs. Kandel had asked him to remove certain articles of jewelry from a safe deposit vault.  He placed them in a small chamois bag which he pushed into his coat pocket.  He then boarded the elevated train to Brooklyn.  He later told police he “recalled being jostled during the trip.”

No. 1178 was still being referred to as The Hicks Building in advertisements as late as 1922.  By 1930 the former bank space was occupied by the United Cigar Stores.  And things would not improve as the decades passed. 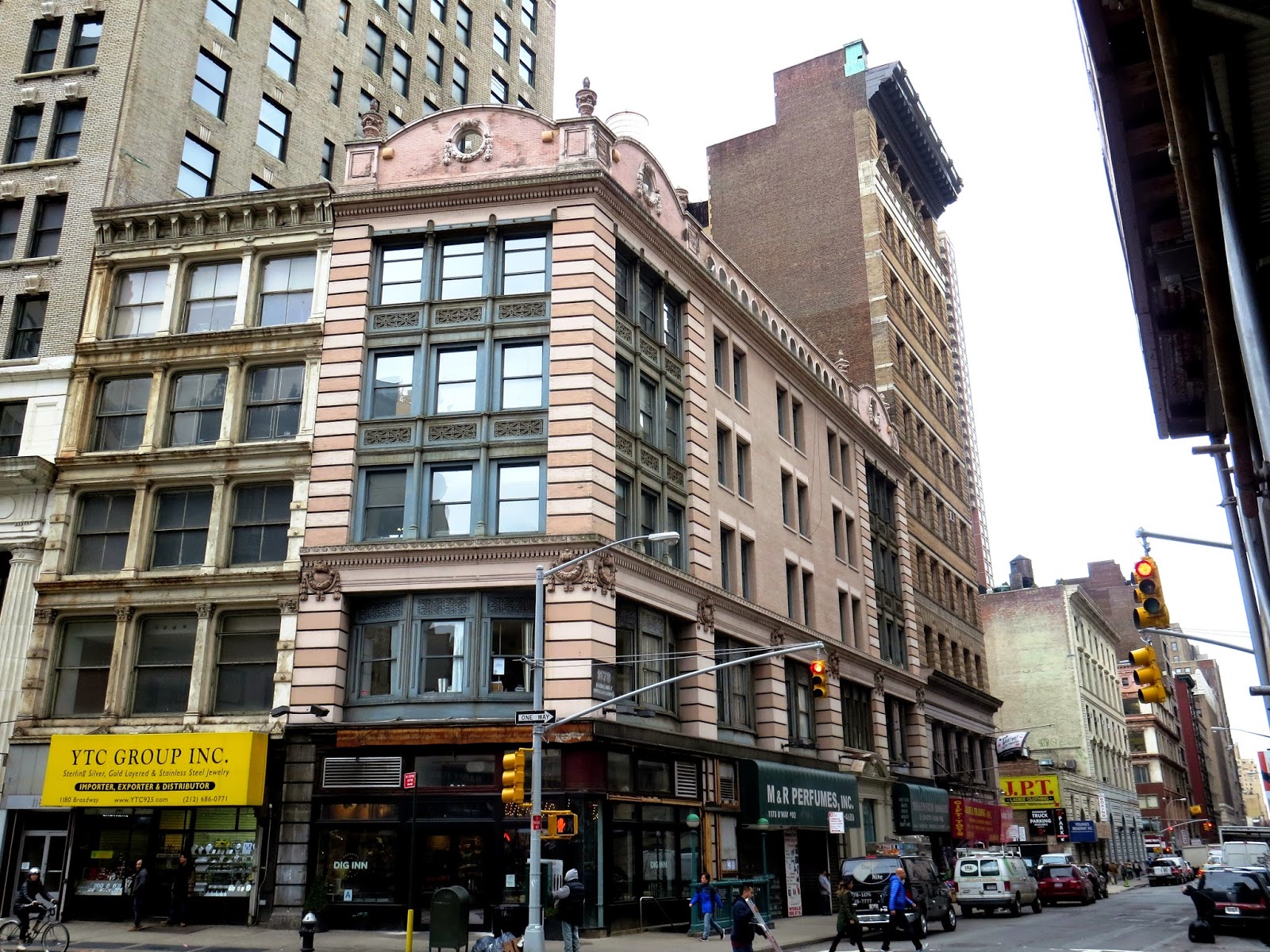 The street level was obliterated in the second half of the 20th century and is now humiliated with garish vinyl awnings of wholesale shops.  Clinton & Russell’s handsome entrance to the upper floors on the 28th Street, however, survives; as does almost all of their design above the first floor.