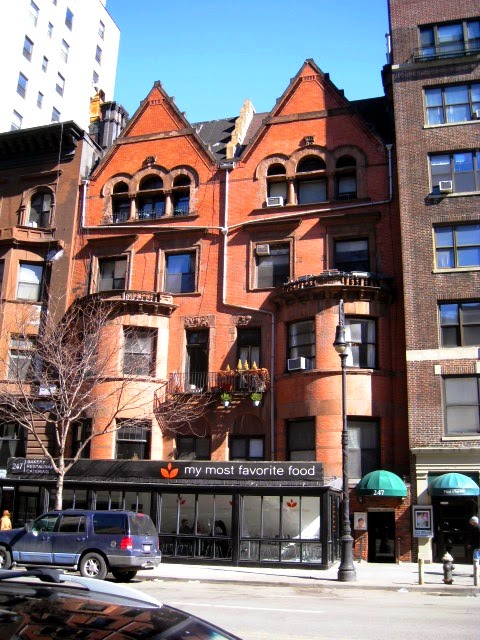 The avenue-wide West 72nd Street experienced an explosion of development as the 1880's drew to an end.  In 1888 60 upscale homes had already been erected on the street and more than 100 building lots were waiting their turn.  Speculators worked with architects like Clarence Fagan True and Charles T. Mott who transformed the Upper West Side, drawing inspiration from a variety of historical styles.

In 1892 four rowhouses appeared at Nos. 247 to 253 West 72nd Street.    Designed by architects Charles A. Rich and Hugh Lamb for developer J. R. Stimpson, they were designed as two pairs of mirror-image mansions.  Nos. 247 and 249 were overall Romanesque Revival in style, but were splashed with other elements—like the stepped Flemish gables and party wall that rose above the roofline. 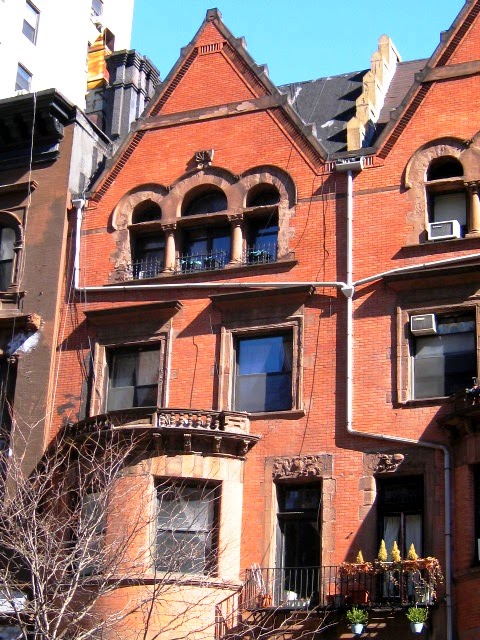 Clad in red brick and trimmed in brownstone, the fanciful facades featured rounded bays crowned by carved balustrades and grouped, arched openings at the uppermost floors that simulated arcades.  Tall stoops rose from the sidewalk to the entrances.

Next door at No. 249 lived Albert Abernethy Cowles and his wife.  By December Mrs. Cowles was ready for guests.   On December 12, 1893 The New York Times reported “Cards for Thursdays in January and February have been issued by Mrs. Alfred Abernethy Cowles of 249 West Seventy-second Street.”

The Cowles country estate, Meadow Wood Cottage, was in Bell Haven, Connecticut.  Educated in Paris, Albert Cowles’s memberships reflected his social and financial status.  He belonged to the Seawanhaka-Corinthian Yacht Club, the Union League and Fulton Clubs, and the Metropolitan Museum of Art.

While the Cowles would remain at No. 249 for decades; No. 247 saw a rapid turnover of occupants.  Two years after Lamb purchased the house broker Howard C. Furman was living here.  His office was at No. 60 Broadway.  Two years later it was home to Peter Gardner who, aside from his regular profession, was a Junior Warden at the Church of the Transfiguration.

The Gardner’s  stay lasted only until 1902 when, in May, Mary Gardner sold the house to Jeremiah W. Finch.   The elderly lumber merchant had barely moved into the house before he suffered what the New-York Tribune described as “a stroke of paralysis…as the result of overwork.”

In addition to his lumber business, Finch owned land in the Adirondacks.  Shortly after the Civil War broke out he had purchased land in Glen Falls.  The rushing water there provided the power for an old lumber mill which Finch purchased and modernized into a large, modern operation.   His vast timberlands provided the trees for his mills.

According to the New-York Tribune, “He was reputed to have amassed a large fortune.”  Not only did Finch own timber-rich land and the lumber business, he was President of the Falls National Bank, a founder of Finch & Pruyn.  Finch & Pruyn was reported to be the largest individual owner of Adirondack land.

Despite his failing health, Jeremiah Finch started construction of pulp and paper mills in that area.  Two years after purchasing No. 247 Finch was feeble, but still managing his businesses.  Then in December 1904 his condition worsened.  On December 16 he died in the house.

In the meantime, Mrs. Albert A. Cowles continued to entertain some of the most illustrious of New York society.  In reporting on the January 4, 1900 meeting of the Thursday Evening Musical Club, The New York Times mentioned a few of the socially-important guests.  “Among those present were Miss Alta Rockefeller, Miss Catherine M. Clark, Miss Schuyler, the Misses Merrall, Miss Johnson, Miss Chase, Miss Westcott, the Messrs. Grannis, Manning, Cowles, Campbell, Rockefeller and others.”

Following Jeremiah Finch’s death, his family leased No. 247.  It was home to Carl Philgus in 1908 when he became a director of the newly-formed Radical Angular Drill and Tool Company.  Then, on August 2, 1914 The Sun reported “Edward W. Browning has bought the dwelling at 247 West Seventy-second street from J. W. Finch of Glens Falls, N.Y.”

Although the mansion was only about 20 years old, residents of the Upper West Side were turning away from vast private homes as the convenience of apartment living gained favor.  Additionally, West 72nd Street was quickly changing from a quiet residential street to a commercial thoroughfare.  The newspaper added “What plans Mr. Browning has for the dwelling are not known.  It is presumed that the house will be removed and a twelve story apartment hotel erected on the site.”

The writer drew his assumption of Browning’s intentions from the fact that he had already erected three apartment hotels on West 72nd Street, demolishing mansions to do so.  Instead, Browning initiated another rapid-fire turnover of occupants.

It appears that at the time of The Sun’s article, Clarence A. Boise was already living in the house.  Madge Keating worked for the Boise family as a maid.   The 23-year old became suddenly sick on Monday night, August 10, and she was taken to Bellevue Hospital around 11:45.

Most likely fearing for her job and her reputation, the unmarried Madge kept the source of her illness to herself.  Then on the evening of August 15, 1908 Clarence Boise heard a muffled cry.  Assuming it was a kitten in distress, he made a search of the house.  The New York Times reported “He traced the sounds to the furnace, and there he found a new-born baby wrapped in a bundle of rags.”

Detective McCarton visited Madge Keaton in the hospital.  “She said the child was born without medical attention at 9:30 Monday night, and that she put him in the furnace, expecting to return for him in a few hours.”  The newspaper reported Madge’s condition as “very serious,” but added “the infant, who went five days from birth without food, apparently had every chance to live.”

Madge was placed under arrest in the hospital, charged with abandonment. 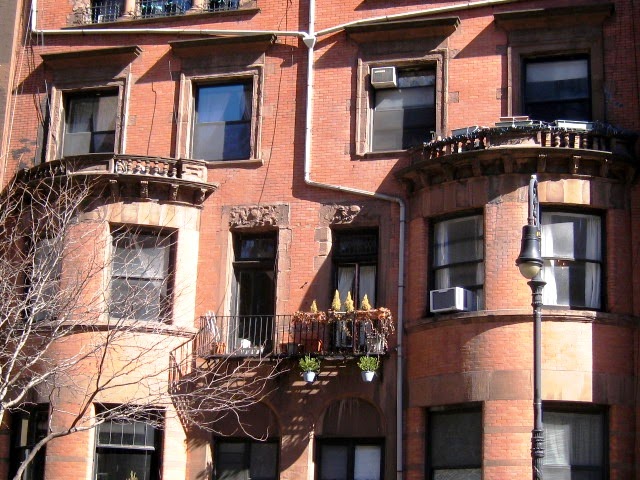 Albert Cowles and his wife sold No. 249 in April 1912 to obstetrician Dr. Percy H. Williams.  Before moving in he hired architects Van Vleck & Goldsmith to update it.  Their plans included new stairs and interior walls which cost Williams $1,500.

Williams’s wife, Alice Castree Williams, had even bigger plans.   The daughter of millionaire John Castree, she purchased No. 247 in 1915.  The Real Estate Record and Builders’ Guide noted that she “now controls a frontage of 50 ft.”

Alice originally leased No 247 to another physician, Dr. Frederic Gilbert Ritchie.  He was a Professor Ophthalmology at the College of the New York Ophthalmic Hospital and an instructor at New York Homeopathic Medical College.

But by 1919 Alice Williams was ready to move on.   In July architect A. J. Thomas filed plans “for alterations to two 4-story brick and stone residences.”  Alice’s renovations would cost $9,500 and result in “bachelor apartments.”

Alice Williams’ remodeled houses contained 15 bachelor apartments each.   Unmarried men in 1919 were not expected to cook for themselves and Department of Building warned “Not more than 15 rooms to be used for sleeping purposes and cooking in not more than two” in either of the buildings.

The men who took rooms in the former mansions held responsible positions; like Dr. Richard M. Field who lived in No. 247 in 1922 when he published the article “How to Master the Art of Homoeopathic Prescribing” for The Homoepathic Recorder.”

By 1931 the apartments were no longer for men only.  In September that year esteemed anthropologist Ruth Benedict signed a least in No. 247 West 72nd Street and moved in with her partner Natalie Raymond.

In the 1960s composer, vocalist and musician Willard Robinson lived in No. 247.  His many songs were recorded by singers like Peggy Lee, Bing Crosby, Nat King Cole and Nina Simone.    His hit “A Cottage for Sale” was recorded by more than 100 artists.  He died at the age of 73 on June 25, 1968 while living here.

Neighbors along West 72nd Street watched the comings and goings of various businesses at street level throughout the decades; but in 1994 they drew the line.  When the Offtrack Betting Corporation proposed opening an OTB parlor in No. 247 the community took action.

According to The New York Times on November 27, 1994 “Noticed went up in buildings, signed by the hastily formed Coalition to Stop OTB From Occupying 247 W. 72d Street.”   When its officials realized the fury the proposed betting parlor incited among the community, “OTB quickly decided not to pursue the move.” 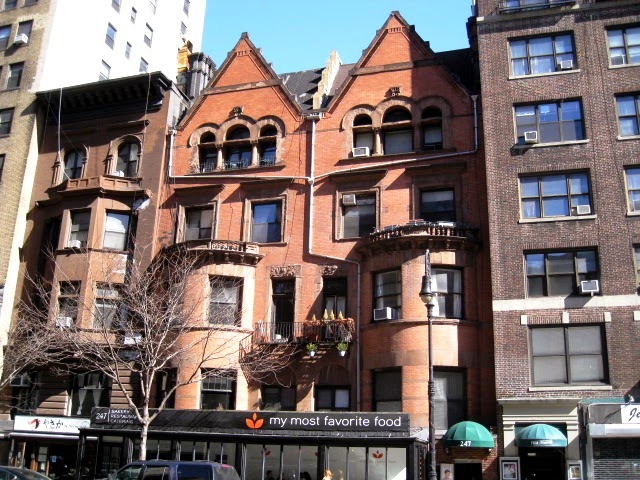 The street level of Nos. 247 and 249 has been obliterated for a glass-fronted restaurant.  But above it much remains of the twin mansions designed by a prominent architectural firm during the residential glory days of West 72nd Street.