The Mead-Metraux House -- No. 193 Waverly Place 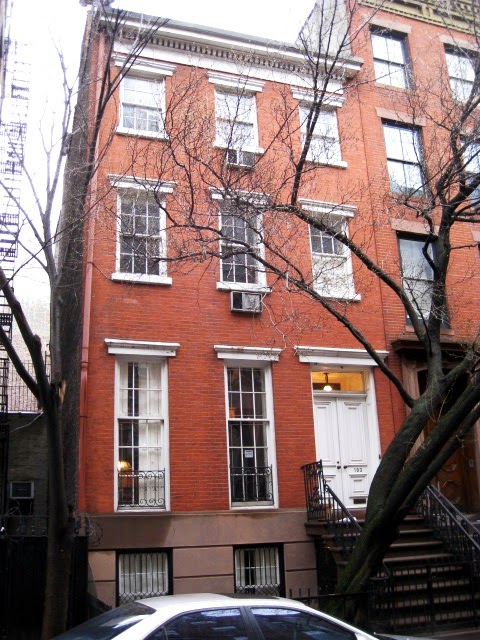 By 1845, when carpenter Patrick Cogan began construction on the handsome three-story house at No. 193 Waverley Place, the building boom in Greenwich Village had been ongoing for two decades.  Cogan’s brick-faced house would take two years to complete; but the results were worth the long wait.

Sitting on a high brownstone base, it was designed in the highly popular Greek Revival style.  The architect worked with the somewhat narrow dimensions of the lot, resulting in the floor-to-ceiling parlor windows being charmingly narrow.  Fine ironwork ran down the brownstone stoop and around the areaway. 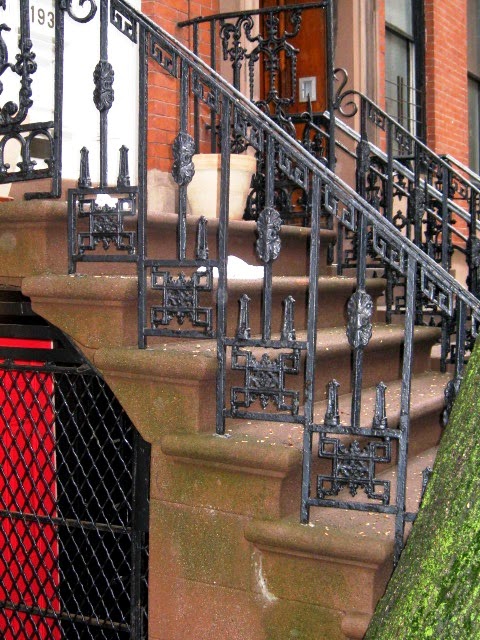 As attractive as it was, the house was not intended for wealthy residents.  By 1859 Rose McMahon lived here, listing her occupation in Trow’s New York City Directory as “washing.”

And by the 1880s it appears No. 193 was operated as a boarding house, with a list of residents that continued to be heavily Irish.  On November 4, 1883 83-year old Martha McFarland died in the house, her funeral being held in the parlor two days later.  Sadia E. Baird was living here at the time.  The unmarried woman was a teacher in the Girls’ Department of Grammar School No. 38 at No. 8 Clarke Street.  In 1884 she graduated from the Chautauqua School of Church Work.  Sadia’s interest in the Chautaqua School may have been sparked by another boarder, Libbie I. McLean.  She, too, was a graduate and served on the school's Sunday-School Parliament with Sadia.

It was about this time that the house received a little cosmetic modernization.  New double entrance doors in the Queen Anne style were introduced, and the simple stone lintels were updated with sheetmetal versions that were a bit more dimensional.

Amelia Mendez lived here at least from 1894 to 1898; and on July 15, 1899 Daniel T. Edwards received his temporary license to teach on Staten Island.  Edwards was a graduate of New York University and had already been teaching in New York for two years.

On Monday morning, September 17, 1906, Mary Farrell walked out of No. 193 Waverly Place, headed to pray at the nearby St. Joseph’s Roman Catholic Church on Sixth Avenue.   As she knelt in prayer there, 19-year old “Tony” Adamos slipped into the pew behind her.  Later that afternoon The Evening Telegram reported, “She saw a hand steal over the back of the seat and grab her purse.”

As the boy ran out of the church, an usher chased after him.  Pedestrians heard his cry “Stop, thief!” and according to the newspaper he was “joined in the chase by half a score of passersby.”   The petty thief was captured by Policeman Leahy, who also recovered Mary’s pocketbook.   Adamos’ irreverent crime landed him in jail, held at a staggering $500 bail awaiting examination—nearly $13,500 today.

The house reflected the varied influx of immigrants at the time.  Greenwich Village filled with Italians as well as the Irish.  In 1912 75-year old Elizabeth Bell Operti died here.  Her obituary noted that she was the “widow of the late Signor E. Operti.” 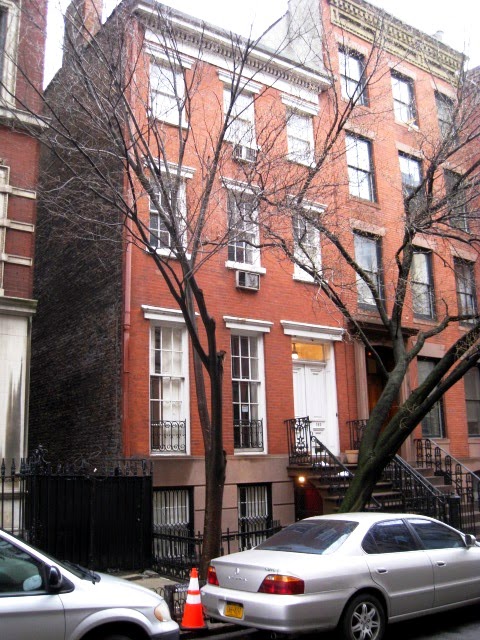 In 1946 Fannie B. Davidson sold No. 193 to Jasper Earl Weatherford.  But a decade later it would have a much more celebrated owner.   In 1955 it was purchased by Dr. Rhoda Bubendey Metraux, the highly-regarded anthropologist and, by now, the partner of Margaret Mead.

The two renowned anthropologists shared the house until 1966, when they moved into an apartment on Central Park West.  Living here with them was Rhoda’s son and Margaret’s godson, Daniel.  Both women wrote extensively, of course, sometimes co-authoring books and articles.

Among the works published while she lived on Waverly Place were Mead’s People and Places, The Golden Age of American Anthropology, and Anthropologists and What They Do.

As Metraux and Mead prepared to move uptown after 11 years here; they planned a good-bye party for the house.   According to Margaret Caffrey’s To Cherish the Life of the World: The Selected Letters of Margaret Mead, they sent out invitations that read:

Rhoda Metraux and Margaret Mead
Invite you to a
HOUSE COOLING
At 193 Waverly Place, June 11, at 8

The quaint Greek Revival structure continued to escape conversion to apartments.   It became home to Rev. H. Karl Lutge, a priest on staff at the Episcopal Church of the Crucifixion in Harlem, and his wife Sarah T. Dickson Lutge.  Sarah had taught English at Brooklyn College and Smith and Wellesley.

No. 193 received its cinematic debut in 1982 when it was used for the exterior shots of the house where character Ivan Travalian lived in the motion picture Author! Author!

Still a private home, Patrick Cogan’s fine example of middle-class residential design in the 1840s is a delightful survivor.