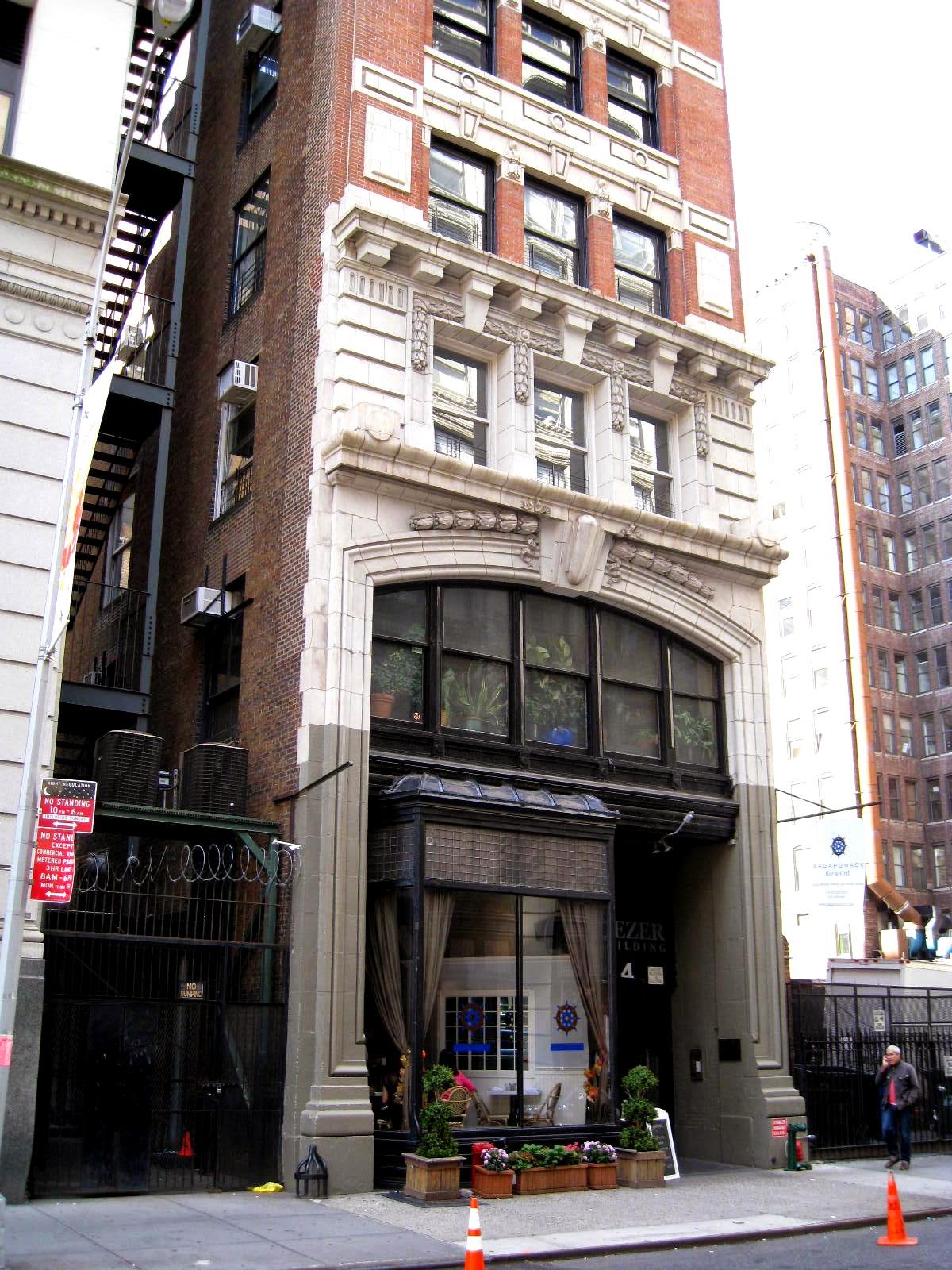 That the still-fashionable residential block of West 22nd Street just off Fifth Avenue was changing was brutally evident on August 20, 1873 when The New York Times printed a letter to the editor from W. N. Callender.  He wrote “I see in your issue of this date you confine the area of stench from the gas-house to between Ninth and Tenth streets.  Allow me to say that I live at No. 4 West Twenty-second-street, and was kept awake on Friday for the entire night by the suffocating atmosphere, and I am a strong and hearty man.”

The house in which the strong and hearty man lived was a commodious, 26-foot wide brownstone mansion.  Four stories over an English basement, it held its own with the opulent homes just around the corner.   Yet already commerce was inching up Fifth Avenue and private homes were being taken over by dressmakers, merchant tailors, art galleries and other high-end shops.

Before long Callender, too, would be gone and his home converted to commercial space.  By 1887 the art dealer Spiridon was selling European oil paintings, marble statuary, and other works of art here.   Spiridon suffered humiliation and scandal when, in January 1892, it was discovered he was not only smuggling paintings into the port; but he was selling forgeries as well.

In reporting on the shocking discovery on January 28, 1892, The New York Times began “All that is painted is not art any more than all that is glittering is gold.”  The article said “The witness who gave strong testimony against Spiridon was Noel Kentish, also an art dealer…He admitted that he did not like Mr. Spiradon.”

By the turn of the century commerce had engulfed No. 4 West 22nd Street.  On January 20, 1901 the New-York Tribune reported on its upcoming sale at auction.  The newspaper described it as “a four story and basement high stoop brownstone building, used for stores, offices and studios, with a two-story extension.”  It was purchased in February by Rudolph Shalk for $72,000—just over $2 million in today’s dollars.

On July 27 that year, Schalk transferred title to his wife, Emma, for $4.   The couple continued to lease the former house as office and retail space for two years.  Mme. Louise Halcombe, a “prima donna soprano,” established her Vocal Studio here; and in 1902 the Holly Co., dealers in silk garments and furs, was here.  The company advertised “a third less than retail stores.  New waists in all of the Fall styles.  A hundred designs $5 to $20.”

Then, on April 4, 1903 the Real Estate Record & Builders’ Guide reported that Shalk had sold No. 4 to James McCutcheon, of James McCutcheon & Co., whose high-end linens store was a block away at No. 14 West 23rd Street.

Somehow the deal fell through, however, and two years later, on March 28, 1903, The Guide reported that Shalk had commissioned architect James B. Baker to construct “12-story brick offices” on the site at a cost of $125,000.

The two-story retail space sat within a heavy terra cotta frame, over which bundled laurel rested on either side of a keystone.  A projecting display window with a curved metal hood lured window shoppers from Fifth Avenue.   At the ninth floor, immense brackets in the form of carved cartouches supported what may have been a balcony.

Several publishing firms had already moved into the area and No. 4 West 22nd Street quickly filled with others.   The Outdoor News Company moved in, publishing the Illustrated Outdoor News here.  For 10 cents an issue, sports lovers got not only detailed articles, but pages of illustrations.  An advertisement in The Evening World on October 14, 1905 boasted “Do you realize that no publication gives authentic, timely, illustrated articles on all outdoor pastimes except The Illustrated Outdoor News.”

The issue that week featured “a special football number with a cover in colors designed by Howard Giles.  There are pictures of the prominent college football squads—an illustrated football article by Walter Camp—an illustrated story on football in the Middle West, by a Western expert.  The double page contains pictures of all the drivers in the coming Vanderbilt Cup Automobile Race.”

In the building at the same time was the Burr McIntosh Publishing Company.  The Burr McIntosh Monthly was established in 1903, the same year the 22nd Street building opened, by the actor-lecturer-photographer-film studio owner-author William Burr McIntosh.  By August 1905 it had moved to No. 4.  An unusual periodical, it had few articles, but consisted mainly of photographs of famous people and pretty landscapes.  Buyers could easily remove the illustrations for framing by simply undoing the string binding.  The publishers boasted “It is the most beautiful, artistic and sumptuous periodical ever produced.  Artists, photographers, engravers and printers, and all classes of people qualified to find flaws, if they exist, pronounce it ‘the most beautiful magazine in the world.’”

On December 8, 1906, The New York Times remarked on the Christmas issue of Burr McIntosh Monthly.  It “is replete with good and seasonable things in the way of illustrations and portraits.  Among the latter is a group of the beautiful women of English society, a number of the popular actresses of the day, and other personages of note, including Mayor McClellan, Congressman Herbert Parsons, Mark Twain, Moritz Rosenthal, the pianist; Camille Saint-Saens, Sir William Henry Perkin, the Duke of the Abruzzi, and the late Mrs. Jefferson Davis.  There are also several excellent reproductions of the paintings of Leonardo da Vinci, including the famous ‘Last Supper,’ which is accompanied by a colored print of the Christ head made from a direct photograph of the original painting.  The descriptive articles are entertaining.”

As The New York Times reviewed Burr McIntosh Monthly’s Christmas edition, the Illustrated Outdoor News was negotiating the purchase of another sport magazine, Recreation.  On January 9, 1907 Printers’ Ink reported on the sale and issued its approval of the title of the joined magazines.

“The Illustrated Outdoor News corporation has bought Recreation, and will merge the two in February, getting rid of the cumbersome name of the former.  Recreation will be the title, but the large-paper format will be kept owing to illustrative advantages.”

The publishing district was soon pushed out by the encroaching apparel district.  By 1909 Burr McIntosh Publishing Company had moved to 39th Street.  Little by little No. 4 was taken over by garment firms.  In 1914 Baruchson & Weinrieb published its new address in American Cloak & Suit Review.  The same year Jacob Rostenberg took the fifth floor; and Satz & Burman were here, manufacturing raincoats.

Samuel Printz was in the building by 1915 manufacturing ladies’ coats and suits.  The firm advertised “’Printz’ is a name to be reckoned with in the Coat and Suit field.”   As World War I drew to a close, garment companies like W. H. Mazey, “linens, white goods;” and “Mr. Coulson, waists” were still leasing space here.

But as the 1930s dawned, the garment district was moving north of 34th Street.  Although Irvin-Warren Clothes, Inc. was still manufacturing apparel in the building as late as 1939, other operations like the Dandy Toy and Novelty Co., here in 1931, were more common.

The second half of the 20th century saw many of the 19th century loft buildings south of 23rd Street neglected and, in some cases, vacant.  But a rebirth of the area began in the last decades.  Laurence Jacobs had been a trader on Wall Street; but found the stress of that job overwhelming.

In 1995 he opened a restaurant just a block away, at Broadway and 22nd Street, called Aja.  Two and a half years later, on May 11, 1997, The New York Times reported “Last week, he took some of his other favorite things in life—cigars, champagne and martinis—and opened Fred’s Beauty (named for an old cigar), where customers can puff, eat and drink until the wee hours of the morning, even while getting their shoes shined.”  Fred’s Beauty was in the amazingly still-extant shop space at No. 4 West 22nd Street. 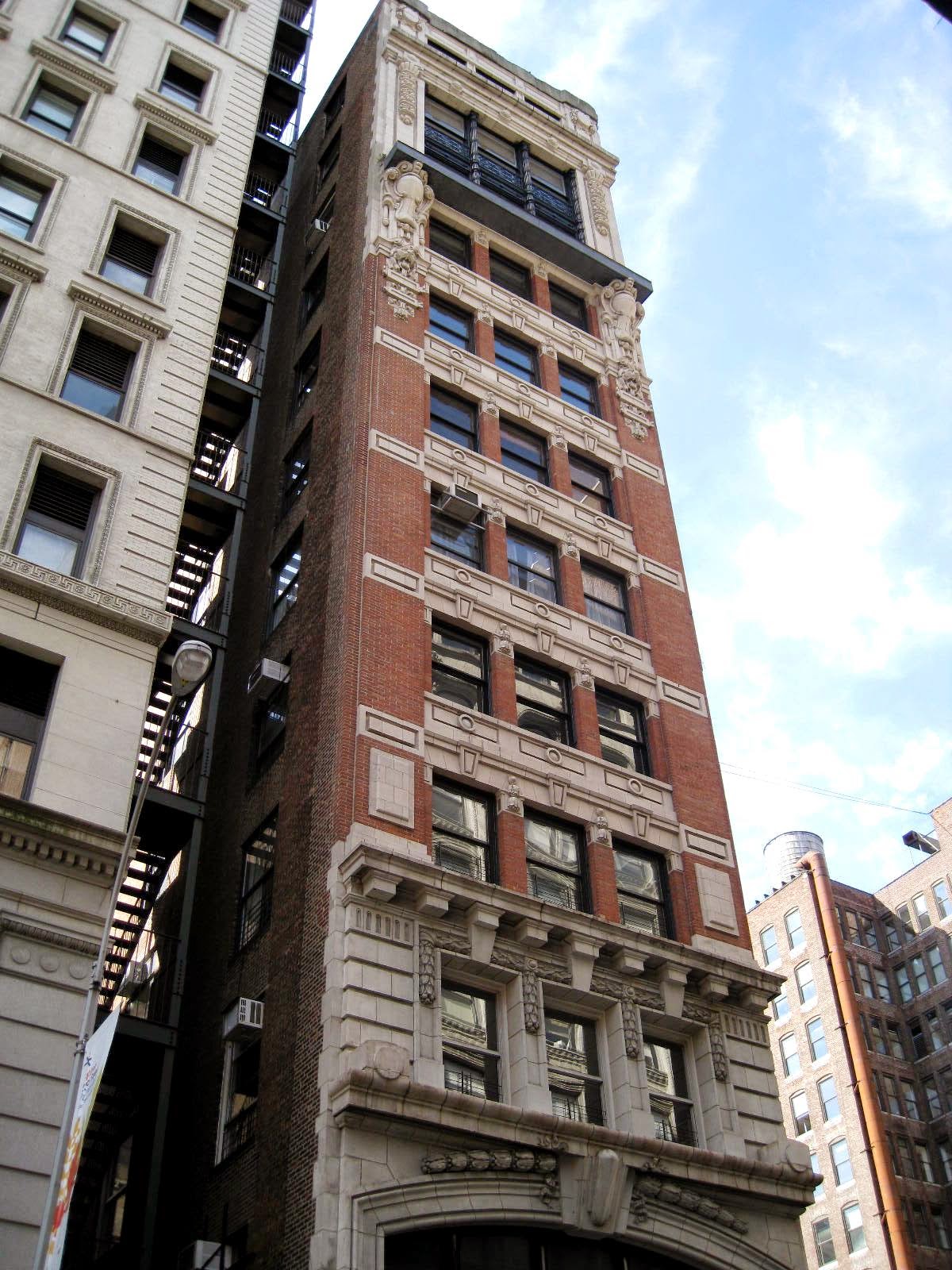 A bar and restaurant still occupies the ground floor.  Although the owners have done an inexcusable chop job on the entrance (which was still intact as late as 1989), the magnificent show window survives—including the original many-paned transom.