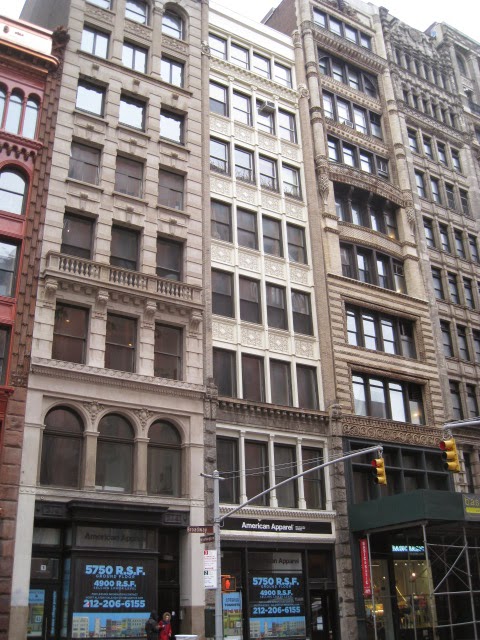 In the 1830s the stretch of Broadway from East 4 Street to Astor Place was lined with elegant Federal-style mansions.  No. 712 exemplified the grand residences.  Three and a half stories tall, it featured an ornate entrance with an exquisite fanlight.

But the golden age of this section of Broadway would not last long.   By the end of the Civil War No. 712 had fallen to commerce; its brick façade painted to resemble heavily-veined marble.  The home of Tilman’s, sellers of artificial flowers and feathers, it foreshadowed the coming millinery trade, still blocks to the south.

On February 22, 1890 the Real Estate Record and Builders’ Guide reported that the “three-story brick store” had been sold for $88,000 to  “Mssrs. Scholle Bros.”  That significant price tag would translate to about $2.3 million today.   But Bavarian-born William and Jacob Scholle recognized the property’s potential on a block rapidly filling with tall commercial structures.

Three weeks later architect Alfred Zucker filed plans for what the Record and Guide called “a handsome store building.”  Zucker would soon make his mark on the neighborhood.   Before 1893 he would design about eight substantial structures within a two block area.

For some reason construction was delayed for two years.  But finally, on February 20, 1892 the Record and Guide reported “The old-time building at No. 712 Broadway is being torn down preparatory to the erection of a fine new store and office building on the plot.”

The fine new store and office building was completed in 1893.  Eight stories tall, its side piers--two stories of chunky granite and six stories of faceted brick—pretended to be structural.  But they disguised a modern iron framework.  They abruptly ended in blunt carved drums that rose slightly above the cornice.  Zucker filled in the space between with airy cast iron.  Spartan, pencil thin columns separated expanses of glass.  Their lack of ornamentation was made up for by the intricate designs of the cast spandrels.

The area was now the center of the garment and millinery industries.  Among the first tenants was Lion Mfg. Company, makers of boys’ clothing.   The firm sold apparel to retailers like Bloomingdale’s which resold its double-breasted suits for $5.00 and $6.50.

But not every tenant was in the garment trade.  The office of The Murray Hills professional baseball team was here immediately after the building’s opening.  On August 16, 1893 The Sun noted “The Murray Hills have Aug. 19 open to play any first-class club.  Address Nat C. Strong, 712 Broadway, New York city.”

N. Beubrik & Brother moved in as well.    The brothers established their clothing manufacturing operation during the Civil War.  Clothiers’ and Haberdashers’ Weekly sympathetically described them on December 20, 1895 saying “The partners are both old men, who have been connected with the clothing trade over thirty years.”

The elderly brothers were now in financial trouble.  When creditors appeared at their office here on Friday, December 13, 1895 they were shocked.  They “discovered that the firm had discontinued business and removed its stock.”

When the elevator boy was questioned, he said that during the past two weeks the firm “removed about twenty-five cases of goods in lots of three or four cases.”  The slippery old men had eluded their creditors, leaving about $700 worth of goods behind.

Clothiers’ and Haberdashers’ Weekly reported “The liabilities are estimated at $38,000, and there are no apparent assets.”

At the turn of the century, the city enacted a forerunner of Clean Air Laws by prohibiting the burning of bituminous, or “soft coal.”  The burning fuel gave off heavy black smoke as opposed to the more expensive but cleaner-burning anthracite coal.  The superintendent of No. 712 ignored the regulation, possibly in an effort to save his employers money.

About two blocks away, at the corner of Great Jones Street, was a fire alarm box.  Early in 1901 a concerned citizen, seeing the black smoke rising from No. 712, turned in an alarm.  Four FDNY engines and two hook and ladder companies responded, only to discover there was no fire.

A few months later the scene was repeated.  Then, on October 28 that year the fire alarm box was pulled once again.  The Evening World wrote “For the third time within the year an alarm of fire was turned in from the box at Broadway and Great Jones street early this morning because a citizen noticing the soft coal smoke arising above the building, concluded that the building was afire.”

Fire Chief Croker had had enough.  He instructed Policeman McCauley of the Mercer Street station to arrest the building’s engineer for violating the soft coal law.

The estate of Jacob Scholle still owned the building in 1903 when the Norwich Nickel and Brass Company leased the store and basement.  Upstairs, Gustav Krakauer moved in, a “manufacturer of pantaloons;” as did the Waverly Novelty Company, “manufacturers of pattern hats.”  The Connecticut-based Norwich Nickel & Brass Co. would retain its showroom here for years, selling display fixtures to clothing retailers.

Harry J. Jacobs was a clothing salesman working here in 1907.  When he made an inappropriate comment to the sister of Earle Kakke, things got heated.  Jacobs appeared before Magistrate Baker on January 21.  “He said that Kakke had written to him, making a threat against him because of a fancied insult to his sister.”  The threatening letter was signed “E. H. Lowenthal.”

Earle Kakke, who made his living as a real estate dealer, admitted he had written the letter, “but contended that he did not mean it in the nature of a threat.”   The judge was not convinced.  Kakke was held on charges of sending a threatening letter through the mails.  It is unclear as to whether Harry Jacobs learned his lesson about how to speak to women.

At the time of Jacob’s messy incident the building was filled with garment and hat manufacturers.  Louis Lazarus moved here from No. 583 Broadway in 1907.  In reporting on the relocation Millinery magazine said “he is designing and manufacturing tailored and untrimmed hats for ladies’ and misses’ wear.  The assortment in all the newest braids and trimmings is such that buyers will be impressed with their style, quality and salableness.”

There were no fewer than six other clothing and millinery manufacturing firms in the building at the time.

No. 712 Broadway was struck with tragedy on the evening of April 27, 1912.  Louis Ginsburg was an elevator operator here and after work that day he was walking along Third Avenue near 11th Street.  Suddenly a man approached him, jammed the muzzle of a revolver into his side and pulled the trigger.

The New York Times reported  the Max Moskowsky and Jacob Batherman, “who were near by, saw the deed, and started a cry of murder.  The man who had fired the shot ran.  He knocked down half a dozen people with well directed blows of his fists.

“Just as the murderer was about to dive into the Subway express station at Fourth Avenue and Fourteenth Street, he ran into the arms of Patrolman Thompson, of the Fifth Street Station.”  The witnesses told Thompson what had transpired.  The bleeding elevator operator identified his attacker.

When the assailant was taken into the police station, he was recognized as the man who had come in the day before complaining that he had been slashed with a razor at a restaurant on Third Avenue.  The 21-year old John Gallagher was taken to the hospital, where Ginsburg again identified him.

At the time, death bed confessions or identifications, called “ante-mortem statements,” were considered iron-clad.  As he lay dying, Ginsburg said he had never seen Gallagher before and did not know why he was shot. 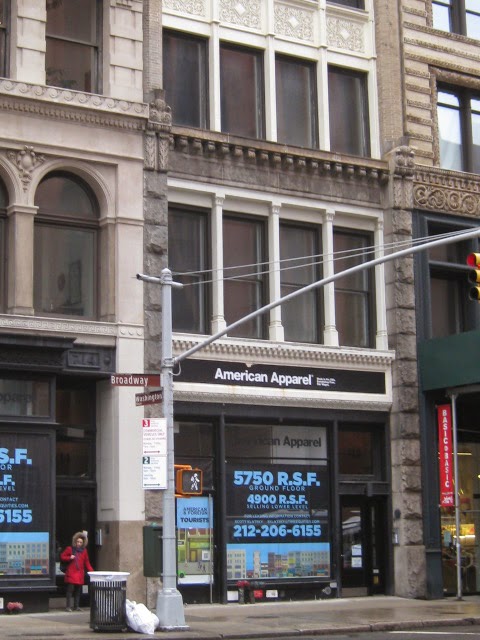 As the decades passed, the garment and millinery district moved north of 34th Street.  In 1938 the store was leased to Wehman Bros. Books.  A much different type of commercial tenant took space on the upper floors.   In 1959 Permarite Corp. was here, hawking government surplus sunglasses to retailers.  At least two handbag manufacturers were in the building in the 1960s, and in 1980 Beam Supply, a janitorial supply house operated here.

By now the Broadway block filled with trendy shops catering to the New York University students and the artists spilling over from the Soho lofts and galleries.   In 1982 the upper floors of No. 712 Broadway were converted to “joint living and work quarters” for artists.  The ground and second floor became home to Antique Boutique—a vintage and imported clothing and accessories store with no-so-vintage prices.  In January 1985 it advertised Italian leather bags ranging from $175 to $325.

Alfred Zucker, known for his exuberant use of carved stone and chunky Romanesque elements, reined himself in when designing No. 712 Broadway.   It survives as an integral part of the long block of commercial structures that transformed the neighborhood in the 1890s.

non-credited photographs taken by the author
Posted by Tom Miller at 3:20 AM