Born in Strausbourg, France, Jules Weber arrived in New York City in 1871 at the age of 17.  On December 28, 1885 he established Jules Weber, Inc, “specializing in the importation of table delicacies” in a cellar on West 34th Street.  The mansions and hotels of Manhattan were staffed with French chefs and Weber’s hard-to-find European delicacies were in high demand.

Weber married the native New Yorker Eugenie Lentz and the couple had one daughter.  He was influential within the French societies, eventually becoming President of the Cercle Francais de l’Harmonie and an officer in the French Benevolent Society.  He was also active in the operations of the French Hospital.

Before the turn of the century Weber opened a high-end store at No. 213 West 42nd Street, just off Longacre Square.   But, possibly prompted by the rapid transformation of the area into the theater district, in 1902 he planned a move.

On February 8 that year the Real Estate Record and Builders’ Guide reported that he had purchased the two-story stable at No. 236 West 40th Street from F. Keller; and the four-story tenement next door at No. 238 from N. and F. H. Kempner.  The combined properties gave Weber a 40-foot wide plot.

A month later the same newspaper noted that Welch, Smith & Provot were drawing plans for a three-story “brick and stone (non-fireproof) dwelling and store.”  The estimated cost of Weber’s new gourmet store was $20,000.   Weber and his architects apparently did some tweaking of the details; for seven days later the cost had dropped to $15,000.

The completed structure looked much like the theaters rising two blocks to the north.  Faced in beige brick, the ground floor store featured two large arched openings.  A side door led to the residential space upstairs.   The architects avoided the use of overly-expensive materials, relying mostly on brick for the architectural details.  Touches of limestone highlighted the brick and an ambitious pressed metal cornice crowned it all. 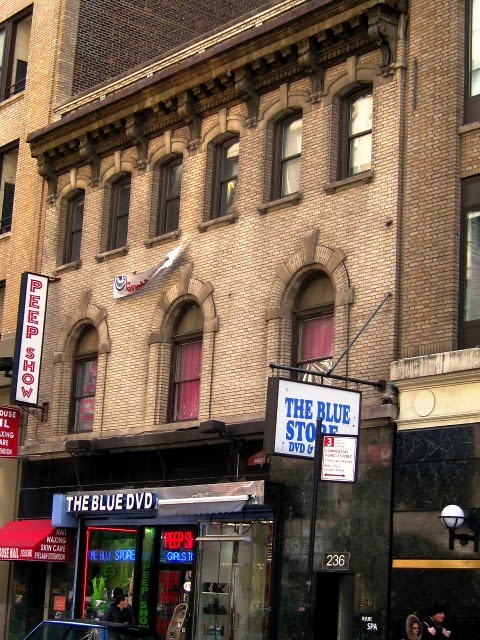 Weber’s business was so successful in the new building that in June 1916 he called George Provot back.  The Real Estate Record and Builders’ Guide listed the necessary alterations: extend the building, install a new elevator, and convert the upstairs residential space to a warehouse.  Weber spent $6,000 on the alterations.

Jules Weber’s high-level contacts made through his affiliation with the French societies resulted in a close friendship with Police Commissioner Richard Enright.   That relationship would come into play in May 1919 when the safe in Weber’s office here was burglarized.

The Evening World reported on May 23 that “the large safe in the private office of Jules Weber, President of the Weber Importing Co. Inc., No. 236 West 40th Street, was broken open, and cash, Liberty bonds, and jewelry valued at $25,000 were taken.  Mr. Weber…is a friend of Police Commissioner Enright  When the robbery was discovered he immediately called the Commissioner on the telephone.”

Enright put “the best detectives” and a “squad of camera men” on the case.  They took photographs of the crime scene and looked for fingerprints.  But the safecrackers were too professional to leave evidence.  “The yeggmen evidently wore gloves, as there were no marks on the surface of the safe or on the tools,” said the newspaper.

In addition to Weber’s losses, manager Jules Aubrey had brought his wife’s jewelry, valued at $10,000, to the office for safekeeping.  It too was taken from the safe.  The value of Mrs. Aubrey’s jewelry, alone, would translate to about $135,000 today.

When Jules Weber died on May 25, 1940 at the age of 86, he had moved his operation back onto 42nd Street, at No. 523.  His handsome building on West 40th Street received a make-over in 1948 when it became home to Magnini Bal Morall Mannequins.  The firm’s showrooms and shipping department were on the first floor, with offices and “incidental factory use” above.

The mannequins made here were near works of art.  Fashioned from papier-mache, they had real hair and individual features.   In August 1948 the city staged the New York Golden Anniversary Exposition in the Grand Central Palace and Magnini Bal Morall’s mannequins played a part.

Two mannequins were prepared representing the bride of 1898 (the company named her “Fussette”) and the bride of 1948, “Jane.”  Florence Ferman, chief stylist of the firm, explained to a Times reporter that bridal fashions had come full circle.

“You can see the difference.  The gowns will be practically the same, except that Fusette will wear brocaded white satin and lace and Jane will wear gold lace.  Fashions have recurred.  Both are to have the same flowing skirt and long train; both the veil, and both the high collar.”  The gowns were supplied by the Metropolitan Museum of Art’s Costume Institute.

Ms. Ferman pointed out that it was not the gown that was different 50 years earlier; it was the bride’s attitude and outlook.  “It’s in the face and the attitude that the difference is.  Fusette’s expression is bland, thinking of someone else, the clinging vine type.  Jane, on the other hand, is a stronger personality.  She is self-assertive, attractive, determined and shows that she knows just what’s going on.”

The display company would be gone from Nos. 236-238 West 40th Street by 1958 when the building was converted again—this time to a meeting room on the first floor and offices above.  It became home to the Luncheonette and Soda Fountain Employees Union Local #11.  Its 11,000 union members worked in the restaurant and hotel industry as short-order cooks, chefs, dishwashers, waiters and waitresses.

In the 1960s the terms “union boss” and “gangster” were often interchangeable; and so it was with Local #11.  On March 17, 1968 William Donovan was arrested, charged with three counts of first-degree perjury.  A grand jury accused him “of having lied about a conversation he had concerning an alleged scheme to offer a $12,000 bribe to an unidentified official in the State Department of Insurance,” reported The New York Times the following day.

The union’s gangland-type operation was evidenced when James D. Gleason, a former business agent of the group, testified that he had made tape recordings of conversations for his own protection.  “He said he had already been beaten and that he lived in fear of further violence.”

Gleason told a reporter that he had arrived at No. 236 West 40th Street on April 6, 1967, having been told there would be a meeting.  Upon his arrival he was told two men wanted to see him in the basement.

“When I got down there, one guy pulled out a gun and said,’What about the 10 grand?’”  (Gleason owed $10,000 to someone as a result of a failed silk-screen business.)  “Then all of a sudden, they jumped on me and beat me with guns and a blackjack.”

He was fired from his $225 a week job with the union and his membership was cancelled.

Gleason testified that the conversations he had taped showed that the union officials planned to give themselves a $75 a week raise.  The extra money, non-traceable as salaries, was to be added to “the bribe fund” until it reached $12,000.

Things have not improved for Nos. 236-238 West 40th Street.  Today the ground floor space where Jules Weber sold French delicacies to wealthy patrons houses a sex video store and a glaring “PEEP SHOW” blade sign is attached to the brick façade.  The storefront has been obliterated, replaced by a cheap modern front.  A hand-made sign is propped In a second floor window that reads “TIME OUT MASSAGE.” 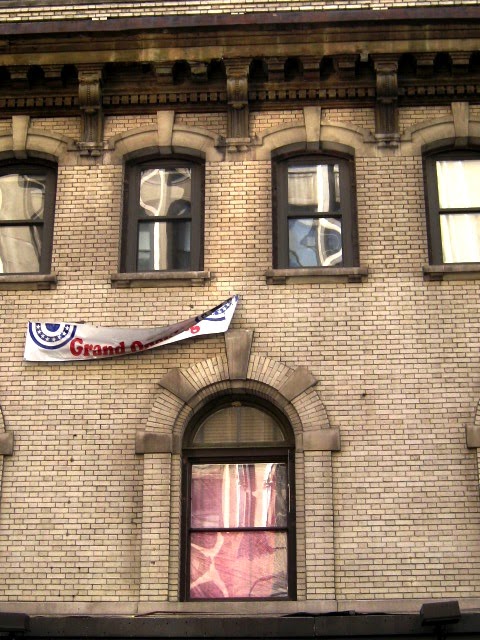 The attractive upper floors, squeezed between soaring Garment Center loft buildings, are virtually untouched---reminding the passerby that the block once had class.