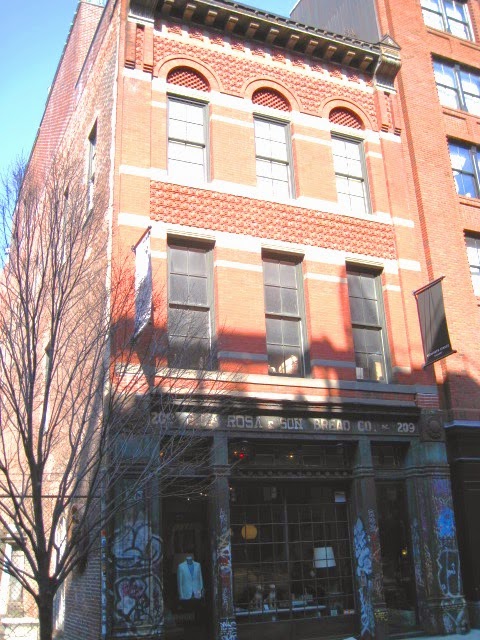 At noon, on October 31, 1842 the property at No. 209 Elizabeth Street described as a “house and lot of ground” was sold at auction.    The north-running Elizabeth Street was laid out in 1755; then extended as far as Bleecker Street in 1816.  Unlike the refined brick homes that were constructed on many of the blocks in the new neighborhoods, this block of Elizabeth Street filled with two-story wooden structures for the lower classes.

The purchaser of No. 209 would not live there long.   On the morning of May 10, 1844 the Coroner held an inquest in the house “on the body of a man of middle age, named Herrick, who died suddenly at that place,” as reported in the New-York Daily Tribune.  The Coroner’s verdict was “Death from intemperance.”

As the city expanded into the area, so did the need for firehouses.  In 1861 Hook and Ladder No. 9 was formed.  As was the case with all fire companies, it was composed of volunteers.  Four years later reformers would pressure the State Assembly to organize the disorganized collection of volunteer companies into the Metropolitan District fire department—the forerunner of the FDNY.

A firehouse was constructed on the site of Herrick’s house.  The valor of its firefighters was evidenced in a monetary thank-you in 1873.  On February 1 that year the New-York Tribune reported “A letter was read from a gentleman who was recently rescued by the members of Hook and Ladder Company No. 9, and who sent $500 to be distributed among his preservers.”

Within the decade, however, the fire station was no longer adequate.   In 1879 Napoleon LeBrun became the official architect of the New York City fire houses.  A year later his son Pierre joined him in the business, creating the firm N. LeBrun & Son.  Their fire house work focused as much on design as function and each one of the resulting structures was a visual pleasure.

In July 1882 N. LeBrun & Son filed plans for “one three-story iron, brick and stone Hook and Ladder Co., No. 9” with an estimated cost of $18,000.  The new station was completed within the year and boasted an innovation in fire house design—the brass sliding pole.   Introduced in Chicago in 1878, the sliding pole made it possible for the firemen to quickly reach the ground floor from their sleeping rooms by bypassing the stairs.  The brass pole in No. 209 Elizabeth Street was the first in New York City.

LeBrun sat two stories of red brick on a cast iron base.  The building followed his normal firehouse plans with the wide bay doors centered between two openings.  Above, stone bandcourses divided the mass of brick; while bumpy quilts of terra cotta tiles separated the second and third floors and filled in the spandrels above the uppermost openings.

The new building received an unexpected structural test on August 10, 1884 when New York City was shaken by a noticeable earthquake.  The New York Times reported on the “general fright” the following day.  The policemen at the nearby Central Office on Mulberry Street were thrown into “great excitement” and Sergeant Bird “sprang from his seat; believing that the building was crumbling.  The residents of the neighborhood were greatly alarmed and rushed pell-mell into the streets.”

Meanwhile, at Hook and Ladder Company No. 9, “the shaking of the building, which is a new and substantial structure, was so marked as to frighten the horses in their stalls, and it was with difficulty that they could be controlled and quieted.  On the top floor of the building is a billiard table, which rocked with the motion of the house, and the balls rolled around the table for a few seconds.”

Earlier that year, on April 24, an amazing act of heroism on the part of Fireman Samuel Banta had occurred at a fire at No. 21 Pell Street.  Fireman Soden of Engine No. 11 was in the basement of the building when it collapsed.   Banta grabbed an axe and a saw and, with a rope tied around his waist, entered the burning ruins, despite warnings from the fire chief not to go in.

“He found Fireman Soden held down by the smouldering debris.  Soden’s leg was broken.  Banta worked for over an hour with the axe and saw in constant peril of being engulfed, until he had Soden free,” reported The Evening World.  “Taking the rope from his body and tying it around Soden, he had the injured man lifted to a place of safety.”  The rope was then lowered to pull Banta out.

The daring fireman was promoted to Assistant Foreman.
The names of firefighters working from Hook and Ladder Co. No. 9 repeatedly appeared in the newspapers for their heroic actions.  But the press was not always so glowing.  In 1888 E. F. Hargrove was noticed absent from the house.  He was found in a saloon.

The Evening World reported that he was charged with being “absent ten minutes without leave” and for “entering a liquor store while in uniform.”  Hargrove’s explanation did not convince his supervisors.  He insisted that the saloon-keeper told him there was a letter for him at the saloon.  “Not wishing to run upstairs to ask permission to go just a few feet distant, he ran into the saloon, secured the letter and returned at once.”

A more salacious story caught the attention of Victorian readers a few years later.  For centuries the charm of a man in uniform had been irresistible to some women.  That was especially true if the man in uniform, like Lt. James Weiner, could be described as “a strong, robust and fine-looking young man of about twenty-eight.”

In October 1893 Weiner met Bertha Rosenthal, who lived with her parents nearby at No. 129 Rivington Street.  The Evening World described her as “a decided blond, fair in features and slight in form.  She wears eyeglasses, which give her rather a distingue appearance.”

According to Bertha, her acquaintance with the handsome firefighter “gradually ripened into mutual love, regard and affection.”  Throughout that winter Weiner was “very attentive” to her and on April 17, 1891 he proposed marriage.  Bertha accepted.  Weiner took advantage of the situation to push the relationship one step further.

The baby was born in September 1892; but by now Weiner was done with Bertha.  She tried “to induce him to acknowledge the child and do her justice by marrying her, as he had promised, but the effort was fruitless, as Weiner refused to have anything more to do with her.”  She sued the Lieutenant for $10,000 damages for betrayal. 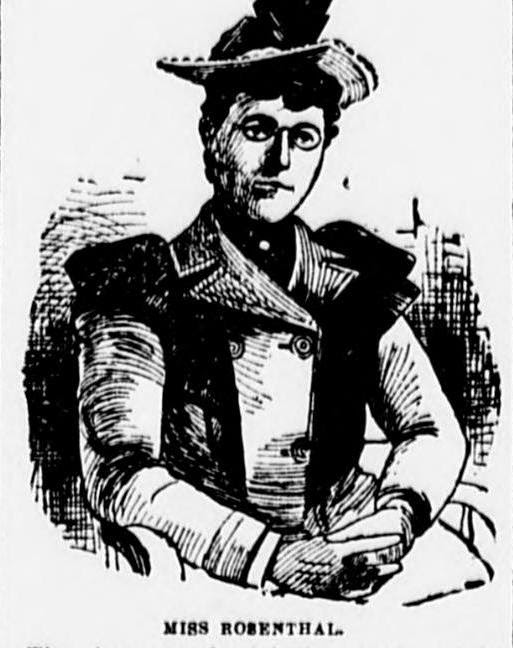 In the meantime, Weiner did not deny that he had had a long-term intimate relationship with Bertha Rosenthal; but he did deny ever proposing marriage and insisted the child was not his.  “Although,” interjected The World, “it is said to strikingly resemble him.”

The scandalous trial came to an end on March 22, 1893.  While the all-male jury may have thought Weiner a scoundrel; it could not ignore the fact that Bertha was not “persuaded” one time to have illicit sexual relations, but repeatedly.   This was the 1890s and her decency was decidedly in question.

The Evening World reported “The jury pronounced Miss Rosenthal’s story as technically correct, but came to the conclusion that her feelings had only been lacerated to the extent of $100.”

The fire trucks that sped from No. 209 Elizabeth Street contended with the unmanaged traffic on New York’s streets, often resulting in collisions.  On June 11, 1894 the hook and ladder truck was “dashing through Elizabeth street,” as reported by The Evening World, to a fire when “a truck piled high with furniture was encountered near Bleecker street.”

One of the three horses pulling the fire truck “reared up and threw a fine bay attached to the furniture truck against a hydrant.”  The horse was so badly injured that it was taken back to the furniture firm’s headquarters and shot. 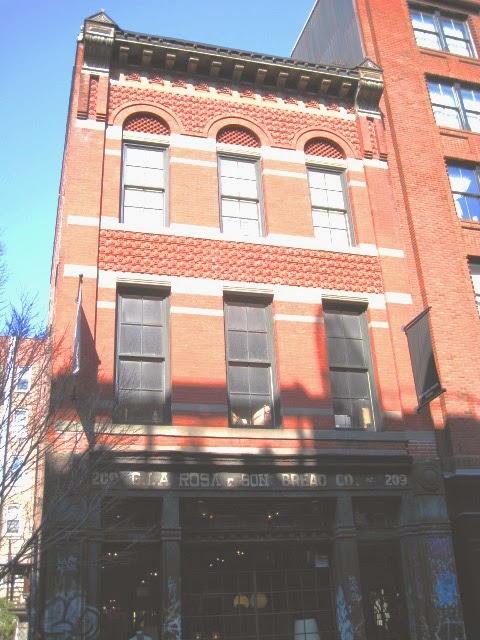 Another crash occurred on June 19, 1905 when the driver of Engine No. 15 had his team at a full gallop to a tenement fire.  He swerved to avoid knocking into a crowd of children at the corner of Henry and Monroe Streets.  His engine smashed into a Borden milk wagon “breaking several hundred bottles containing milk, which flooded the street.”

While the firemen and bystanders attempted to disentangle the engine and the milk wagon, Hook and Ladder No. 9 and the tender from Engine 15 “came tearing around the corner.  They were going so fast that before the horses could be pulled up, both crashed into the overturned milk wagon, smashing the remains of that vehicle into kindling wood.”

Ironically, “while the firemen were ‘cursing’ their luck, a bucket of water extinguished the flames and peace reigned once more in the tenement.”

Like most firehouses, Hook and Ladder No. 9 had a mascot.  “Jack the fire dog” lived in the station house and ran alongside the four-ton ladder truck to fires.  On Thursday night, August 17, 1899 the fire fighters responded to an alarm.  The truck had only gone half a block when, at the corner of Elizabeth and Prince Streets, Jack was accidentally kicked by one of the horses.  Brooklyn’s The Daily Standard Union reported “Jack rolled over, and before he could get up again the wheels ran over his neck, killing him instantly.”

Foreman Green stopped the team for a moment while a fireman threw Jack’s body onto the truck; then continued to the blaze.  The newspaper said “After the fire was extinguished Jack was taken back to the truckhouse, and many firemen and neighbors came in to see him.”

It added, “He will be stuffed.”

Throughout the decades the men of Hook and Ladder No. 9 would repeatedly fight tenement fires and blazes in the many millinery factories in the area.  The flammable contents of the hat shops—glue, straw, paper, and such—resulted in fires that spread with lightning-fast fury.  The company was also called to major conflagrations at significant distances from Elizabeth Street.

It responded to the historic Triangle Shirt Waist factory fire in March 1911, and even the Hoboken waterfront fire in 1930 and the $5 million Coney Island blaze in July 1932.  By then horses in fire stations were a thing of the past.  Hook and Ladder Company No. 9 had replaced its horses with a motorized truck in 1917.

Napoleon LeBrun’s structure was the last word in firehouse design in 1883.  But in the mid-20th century it was deemed “antiquated.”  The building designed for a single horse-drawn truck was not practical for modern equipment.   After 87 years here, Hook and Ladder Company 9 moved out on November 21, 1948.

On November 23 The New York Times reported “The company will share quarters in the Great Jones Street building with Engine Company 33.  Meanwhile the old two-and-a-half-story red brick structure on Elizabeth Street will remain vacant and boarded up pending determination of its future by the city.”

It was not boarded up for long.  In 1948 Emergency Squad 2 moved in.  It would rush to emergencies as dire as drownings and building collapses, and as routine as the boy in July 1951 who got his head stuck between the bars of a fence.
In the second half of the century the building was converted to a bakery for La Rosa & Son Bread Co.  The upper floors from which firemen had slid down a shiny brass pole became offices.  But the quaint bakery with its aromatic smells did not survive into the 21st century.

In August 2005 the structure was graffiti covered and unused when the Department of City Planning approved a rooftop penthouse and conversion to a single family residence above the ground floor.  The building had been acquired in June that year by the Elizabeth Firehouse LLC.

photographs taken by the author
many thanks to reader Benjamin George Friedman for suggesting this post
Posted by Tom Miller at 3:47 AM