As wealthy citizens lined Washington Square with elegant mansions in the 1830s, speculative developers hoped that the blocks branching off the park would ride its upscale coattails.  As it quickly turned out, that was not to be.

In 1835 Thomas Barron erected a four story Greek Revival home at No. 122 Waverley Place.  Its unusual design featured an unexpectedly shallow stoop above an English basement.  The rusticated brownstone parlor level served as a base for three stories of red brick, trimmed with brownstone sills and lintels.

For several years, during the 1840s, The New York City Director listed Aletta M. Eghart, “widow of John,” living here.  But the life of No. 122 Waverley Place as a single family home would be rather short-lived.

In April 1852 an advertisement appeared in the New-York Daily Tribune offering “Furnished and unfurnished rooms to let, with Board for Gentlemen and their Wives, or single Gentlemen, in a pleasant location.”  The ad noted that the house was “near several stage routes.”  The proprietor may have been reticent to rent to single women out of fear the house would be suspected of being a “disorderly house.”

It would appear that the residents at the time were upscale boarders.  A year before the Tribune ad, the Samuel Whittemore family had sold its elegant Federal style mansion at No. 45 Grove Street.  Whittemore was a successful manufacturer of textile equipment.

Now, when James Bayard Whittemore died of a skin infection, erysipelas, in February 1852, The New York Times reported that his funeral would take place “from the residence of his mother, Mrs. Saml. Whittemore, 122 Waverley-place.”

In 1863, two years after the outbreak of what New Yorkers referred to as The War of Rebellion, a draft lottery was established.   It would directly affect residents of No. 122 Waverley Place.  On the same day, August 20, 1863, the names of Thanthirus Heart and George F. Merrian were drawn.  On March 17, 1865 P. Cusson, another resident, was drafted.

The boarding house maintained its respectable status throughout the 19th century.  In 1867 Dr. Albert Boldeman was here, treating patients from 8 to 10 a.m. and 6 to 7 p.m.  For several years the unmarried school teacher, Margaret A. Boak lived here while working in the Boys’ Department of Public School No. 11.  She had graduated from the Female Normal School in July 1859.  By 1874 she had moved further west on Waverley Place, to No. 154, closer to the school.

The 1870s saw Frederic Stengel boarding in the house.  He was an instructor in German at Columbia College’s School of Mines.   The financial status of the residents might be reflected in Gerald McKenny’s salary.  He lived in the house in 1881 when he earned a salary of $2,000 as a court stenographer.  That amount would translate to about $47,000 today.

At the same time other teachers lived here.  Vincent Aldridge was in the building at least from 1886 through 1888; and Professor William W. Wilcox commuted every day to Hoboken, New Jersey where he taught in the Stevens High School.

The 1890s were troubled days for many of the Waverley Place residents.  The house was owned, by now, by Frederick Raabbe, an owner of many Greenwich Village properties.   In 1894 Nicolas Weiss, a watchmaker for Tiffany & Co. was a tenant.   In October that year he was arrested on a charge by Tiffany that he had stolen a “large quantity of jewelry.”

Weiss told his lawyer he had no money, but gave as his retainer the furniture he owned at No. 122 Waverley Place.  “When the lawyers sold the furniture it netted them only $35,” reported The New York Times.  The amount was insufficient to cover the attorney fees, so Weiss turned over his watchmaker’s tools, allegedly worth $250.

When Weiss appeared in court he pleaded guilty and was sentenced to a year in the penitentiary.  Tiffany & Co. intervened and convinced Governor Morton to pardon him.  Now free, Nicolas Weiss could not make a living because the lawyers had sold his watchmaker’s tools.  In an astonishing turn of events, in June 1895 he had his attorneys arrested, charged with larceny of his tools.

Durant L. Biggony also found himself behind bars.  He was a clerk in the Yosta-Kramer Company, manufacturers of cloaks at No. 24 West 23rd Street.  In January 1896 the stockholders were planning a reorganization of the firm.  Fearing he would lose his company, Biggony’s boss, Gustav Kramer instructed him and three other clerks to bar the doors to prevent a stockholders’ meeting.

On January 8 The New York Times reported “When the stockholders met Monday they found the doors locked, and were forced to hold their meeting on the sidewalk, in spite of the cold.”  Having elected a new president, they gave him his first order: “to force the door.”

The door was forced open and Biggony and his co-workers, who had simply followed the instructions of their employer, were arrested on charges of trespassing.

Later that year resident Nicola Meiso was in Jersey City awaiting the ferryboat John G. McCullough to take him back to Manhattan.  Meiso and about 40 others waited on a bridge as the boat approached the slip.  They watched in horror as the ferry did not slow down, but ran full force into the dock and bridge.

“Great pieces of planking flew into the air,” reported The Times.  Those on the bridge “started to run back when the crash came, but were caught by the flying timbers.  “Four persons on the bridge were hit by flying planks, and others were knocked down in the backward rush to escape.”  Among the most seriously hurt was Nicola Meiso whose injuries included a broken right kneecap.

A greater tragedy befell No. 122 a year later.  Julia Ambrose was 26-years old in 1897.  She and her husband had a young son.  One night in November that year the couple quarreled.  He stormed out of the house and, when he had not returned a week later, the young woman could not pay the weekly rent and had knew of no way out of her predicament.

On the afternoon of November 25 she told her landlady “she was going away” and left the house with her son, Edward.  An hour later she fell unconscious to the pavement at 11th Street and Sixth Avenue.  An ambulance took her and the child to St. Vincent’s Hospital where a note was found in her pocket:

Life is too miserable and unhappy for me.  I can bear it no longer, Julia.  P.S.—Edward is two and a half years old.

The doctors “restored her to consciousness, and she confessed she had taken poison,” reported The New York Times.  She was arrested on charges of attempting suicide and the boy was imprisoned with her.  The Times added “Last night her husband called at the Waverley Place boarding house and asked for her.  When informed that she had gone away he paid the week’s bill and departed.”


Like Mrs. Samuel Whittemore almost half a century earlier, resident John Van Ness was what The New York Times called “a member of an old family whose name has been one of prominence and respect in this city.”    The Van Ness estate, once the seat of a wealthy and influential family, had decades earlier been swallowed up by the development of Greenwich Village.

Now, in 1899 the 65-year old John Van Ness lived at No. 122 Waverley Place, “old, broken in health, living the life of a recluse in the neighborhood where the days of his boyhood were spent,” said The Times on February 27 that year.  The newspaper explained the hard times that had fallen on the man.

“He used to spend much of the time in which he was not looking for work in sitting in [Washington Square] park on pleasant days.  Friends who had supplied him with means fell away.  He was deaf and decrepit, and none wanted such a workman.  He had a sister but it seems that she had ceased to come and see him.”

In December 1898 Van Ness was found in his “little room” on Waverley Place “unconscious from the effects of gas pouring from a gas stove which he used to cook his meals.”  The old man was taken to St. Vincent’s Hospital where he recovered, then was arrested for attempted suicide.  He was later discharged.

Three months later, on Saturday February 25, 1899 he was again found unconscious “in the same room in the same way.”  When he recovered at St. Vincent’s Hospital this time, he was not arrested, but taken to Bellevue Hospital, known for its treatment of mental cases.

“They said at St. Vincent’s that his disposition was rather ugly and they did not want to keep him,” reported The New York Times.

With the turn of the century at least two physicians were in the house.  Dr. Maximilian Lewson would remain here at least until 1904.  The Lewson family suffered horrible heartache when one-year old W. E. Lewson died in the house on January 4, 1900.  Dr. Cecile A. Griel was also here, working at Mt. Sinai Hospital.

At the time the two physicians lived here, Greenwich Village was changing.  Especially around Washington Square park vintage homes were being heavily altered into artists’ studios—prompted by the recent influx of creative types—artists, musicians, poets and writers.

In 1915 the contemporary house next door at No. 124 Waverly Place (the second E had been dropped from the name by now) had received a startling makeover that resulted in broad openings on each floor, drenching the interior studios with sunlight.

Hal Marchbanks had a similar idea.  On June 21, 1919 the New-York Tribune reported that he had purchased the “five-story apartment,” (including the basement level as a floor).  A week later the Real Estate Record & Builders’ Guide noted that Marchbanks “will remodel.”

The alterations were significant.  As owner Vincent Pepe had done to No. 124, the central pier between the two western-most openings was removed and broad studio windows installed; giving a rather pleasing asymmetrical look to the structure.  Updated ironwork replaced the Greek Revival railings and fencing; but the old wing walls of the stoop and the original Greek Revival entrance were preserved.

The expansive studios—one per floor—attracted a more upscale tenant.  Joseph K. Moore had been the ceramic engineer for the Robinson Clay Products Co. in Akron Ohio before serving as Captain in the Chemical Warfare Service during World War I.   Following the war’s end, he moved into No. 122.

Wealthy newlyweds seem to have been attracted to the newly-completed structure.  When Esther Tufts (described by the New-York Tribune as “a member of the younger set of Pinehurst and Boston, taking part in the tennis, riding and other activities there”) married Tracy Hammond Lewis in 1920, newspapers announced “On their return from their honeymoon, Mr. Lewis and his bride will live at 122 Waverley Place.”

That same year Barbara M. Shedd married Thomas Chandler Wayland in a fashionable Fifth Avenue wedding in the Brick Presbyterian Church.   Like the Lewises, the newlyweds moved into 122 Waverly Place following their honeymoon. 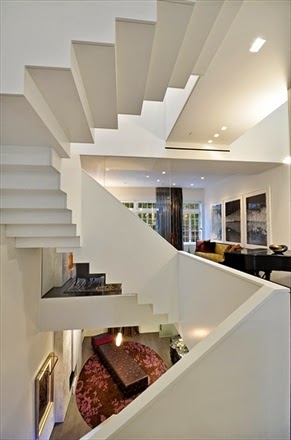 In 1953 a conversion bisected the floors into two apartments rather than one.  The building continued to house a succession of tenants until 2009.  Then a remarkable gut renovation resulted in a spectacular single family mansion—much the 21st century version of what Thomas Barron had envisioned more than a century and a half earlier.  In 2012 the house was listed for just under $19 million.