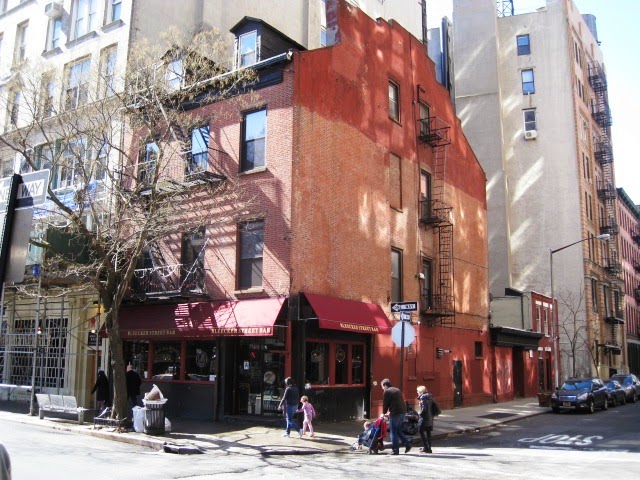 The block of Bleecker Street between Broadway and Lafayette Street was on the border of one of Manhattan’s most exclusive neighborhoods in the 1830s—the Bond Street district.  Holding its own with the mansions one block away was No. 64 Bleecker Street.  Completed in 1823, it would be home to Jacobus "James" Roosevelt II, great-grandfather of Franklin D. Roosevelt.  Clad in Flemish bond red brick the house rose three stories below a dormered attic, and handsome paneled lintels of brownstone capped the openings.

Roosevelt was the son of Isaac Roosevelt and the former Cornelia Hoffman.  His great-great-grandfather, Claes Maartenszen Van Rosenvelt was the first of the Roosevelts in the new world.  After graduating from Princeton in 1780, he went into the sugar refining business (his father's occupation) and banking.

He moved into the new house with his third wife, the former Harriet Howland.  His first and second wives had both died.  He and Harriet were married on January 29, 1821.  Although the couple had no children, he had produced 13 from his former marriages.

The Roosevelts remained in their elegant home for decades.  James died on February 6, 1847 and Harriet nine years later, on April 18, 1856.   The following the house was acquired by Dr. Elizabeth Blackwell, the first female physician in the United States.  The ground-breaking woman had begun treating patients in New York in 1851; and in 1854 established the New York Dispensary for Indigent Women and Children on East 15th Street.

Now with the larger accommodations of the former Roosevelt house, she established the first women's hospital in the country, entirely staffed by females.  It was customary for facilities like this to raise money through "fairs" or bazaars.  On December 15, 1857 the "Ladies' Hospital Fair" was opened in the building.  It lasted the entire week.

On February 1, 1859 The New York Herald announced "The trustees of the New York Infirmary for Indigent Women and Children held their fifth annual meeting last night at 64 Bleecker street."  During the previous year 3,072 patients had been treated.  The article reminded readers "Females are taught the practice of medicine in the Infirmary."

Two personal advertisements that year hinted that not all infants survived childbirth.  On September 5, 1859 one read "Wanted--A situation by a very respectable young married woman, with a fresh breast of milk as nurse."  Another appeared in The New York Herald: "Wanted--A situation as wet nurse by a healthy young woman."  Both ads said they could be temporarily seen at 64 Bleecker Street.

In 1860 the trustees of the New-York Infirmary for Indigent Women and Children purchased No. 126 Second Avenue.  The New York Times explained on May 7 that year, "The Dispensary and Infirmary patients are constantly increasing."  The "large and commodious" 25-foot wide home, according to the trustees, was "well adapted for the accommodation of patients."  The hospital moved to that new location the following year. 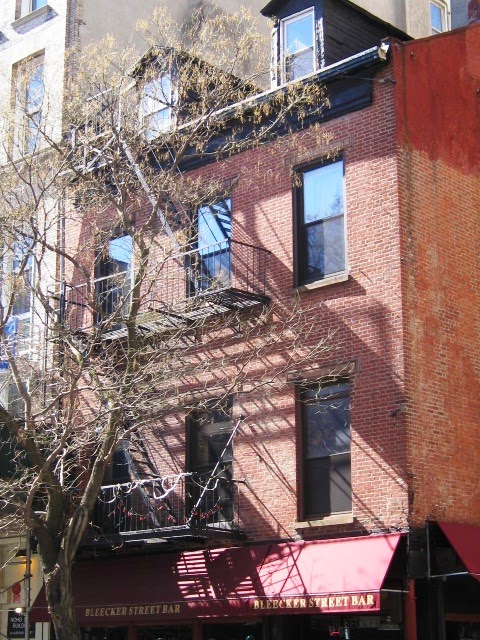 Bleecker Street was renumbered in 1859, earning the house the new address of 56.  By now the once-elegant Bleecker Street block was far less so.  Wealthy citizens moved northward into Murray Hill and onto Fifth Avenue.  By 1862 the house had been converted to a store on ground level and rented rooms upstairs.

Madame Flora Pinchon ran her upscale ladies’ apparel and accessories shop in the former parlor level.   She was understandably upset when she realized that a black silk mantilla was missing in June 1862.  Its price tag was $55—nearly $1,500 today.

On Monday night, June 9, Madame Pinchon attended the Cremorne Gardens and was stunned when Mary Murray walked in wearing the high-priced mantilla.  Mary was arrested and police warned other shopkeepers that she was just one of a gang.

“It is alleged that there is a large class of cloak and mantilla thieves, who have recently plied their trade with great success in the neighborhood of Canal and Bleecker streets.”

Irish immigrant John Farell was living upstairs at the time.  In 1863 his name was pulled in the Draft Lottery, instituted to increase the numbers of Union soldiers.

By the end of the war Madame Pinchon’s shop was gone, replaced by Edington B. Decker’s piano shop.  But a far more exciting tenant would take over much of the upper floor space in 1874:  The United States Secret Service.

The Secret Service, originally formed to battle counterfeiting, had been in existence since around 1865.  Now it opened a New York City office.  On April 11, 1874 The New York Times wrote “Of the thousands who daily traverse Broadway in the vicinity of Bleecker Street, few, if any, are aware of the close vicinity of an institution whose ramifications, extending from Maine to California, and from Minnesota to Texas, carry terror and defeat into the ranks of outlaws, whose secret haunts no other organization in the land could reach or break up.”

That same year, on July 20, a Times reporter “called on Col. Whitely, at his office, No. 56 Bleecker street.”  The interviewer was interested in a sensational safe burglary at the Office of the United States Attorney General in Washington D. C.; and about rumors that Solicitor Wilson “had recommended that the Secret Service Division should be entirely abolished, on the ground that it was managed with reckless extravagance, and did not, by its results, satisfy the expectations of the Treasury Department.”

H. C. Whitely, who headed up the New York office, was quick to defend his organization.  “Aside from the matters connected with the safe burglary, Mr. Wilson had not made even a superficial examination of either the papers or records of the Secret Service Division; that the examination he had made was certainly not such as would enable him to come to any conclusion in regard to its efficiency, and the amount of the work done, or the character of its disbursements," he told the newspaper.

The safe burglary of the Attorney General’s office was the major case Colonel Whitely and his agents worked on that entire year.  In the meantime, the Secret Service shared the upper floors of No. 56 Bleecker with Porter & Schraidt’s detective agency.

Taxes were levied on alcohol products and to ensure that only the goods for which the taxes had been paid made it to the saloons and liquor stores, revenue stamps were affixed to the bottles.  They sealed the caps so that when the bottles were opened, the stamp was damaged.  A brewer who could get his hands on pristine beer stamps could avoid paying taxes and save himself thousands of dollars.

Early in September 1875 an informant told the private detectives that barber William Pakulski, who lived at No. 154 West Houston Street, “was in possession of a large amount of stolen United States beer stamps.”  The detectives moved in.

They informed the police of their case, then Schraidt became friendly with Pakulski at his shop at No. 529 Broadway.   He hinted to the barber that he was interested in purchasing the stamps, and The New York Times later explained “it was arranged that the stamps should be brought to a wine saloon in the Bowery.”

On September 16 Pakulski went to the saloon.  He called in a boy named Henry Myers who gave the barber a large case.  Outside of the rear entrance on Chrystie Street, Detectives Sullivan of the 10th Precinct and Schraidt were waiting.   When Henry Myers walked out, he was arrested.  The detectives then nabbed Pakuski inside.

“The valise on being opened was found to contain $4,360 worth of stolen beer stamps,” reported The Times.  The haul would translate to about $95,500 today.

Within the decade the investigative offices would be gone and low-income roomers would occupy the upper floors.   The class of tenant was exemplified by two girls, Jennie Walsh and Maud Mack, who both worked at Kinney’s cigarette factory.  On August 14, 1887 the company organized an employee picnic which both girls attended.  Unfortunately, they were not the paragons of ladylike Victorian demeanor.

Their trouble began when they were arrested on the way home for intoxication and disorderly conduct.  While they sat in the Jefferson Market Court awaiting arraignment, Nellie Tracey approached Jennie.  The woman had been released from the Blackwell’s Island workhouse and celebrated her freedom by getting drunk.  She asked Jennie if she had any snuff.

When Jennie said she did not, Nellie Tracey pulled out a penknife and stabbed Jennie in the right hip, “inflicting a severe wound,” reported a newspaper.  The other women in the holding cell “raised an outcry” and officers disarmed Nellie—who now faced charges of felonious assault.

The incident did not lighten the fates of Maud nor Jennie, however.  The New York Times reported on August 15 “After Jennie’s wound had been dressed she was sent to the House of Detention.  Maud Mack was sentenced to 10 days for intoxication.”

As the turn of the century approached, the garment and millinery district was engulfing the neighborhood and the owner of No. 56 Bleecker Street ceased renting rooms; leasing space instead to small businesses.  In 1890 the ground floor was occupied by S. Meuer & Co., “dealers in artificial flowers.”  Charles Welsker Co. was listed in the building by 1896.  The firm sold feathers—“fancy and military”—to adorn the headwear of fashionable women and the ceremonial hats of military officers.

At the same time the Household Publishing and Printing Company was headquartered here.  But in 1897 the firm was in trouble.  The first signs appeared in April when United States Deputy Marshall Walter Stafford entered the office and arrested Carrington Thompson “on the charge of using the mails for swindling purposes.”  Thompson, it was alleged, sent letters through the mail offering to send a bicycle worth $100 to anyone sending him $45.”   The duped would-be bicyclists complained to authorities when the bikes were never received.

Things only got worse two months later.  The American Stationer reported on June 3 that year that its secretary, John Maclay “charges that the company’s president, Carrington Thomson, has misappropriated some $20,000 worth of the company’s funds and has wrecked the concern.”

Two days later The New York Times reported on a “meeting of the creditors of the Household Publishing and Printing Company, publisher of The Household Magazine…to see if anything could be saved out of the wreck of the concern.”  The newspaper said bluntly “The affairs of the company are in a deplorable condition.”

The building would continue to house garment companies throughout two decades. Ban Shecket “manufacturer of fur lined coats” was here in the 1910s into the 1920s.  On October 31, 1917 the firm purchased 3,250 “muskrat rats” which would be transformed into ladies’ apparel.

By now No. 56 was the last remnant of the elegant residential neighborhood of the 1830s.  The building was overshadowed by hulking factory buildings.  As the 20th century forgot the Noho neighborhood, the brick house fell into neglect.

But eventually, as is always the case in Manhattan, the neighborhood changed.  Artists rediscovered the area in the last quarter of the century. The Bleecker Gallery opened in No. 56, lasting here until 1987.  In 1990 the ground floor where Madame Flora Pinchon sold mantillas and cloaks to moneyed female shoppers, became the Bleecker Street Bar which still operates today.

photos by the author
Posted by Tom Miller at 2:48 AM