On May 16, 1914 The Real Estate Record and Builders’ Guide summed up the history of 23rd Street in two sentences.  “Twenty-third street began as a residential center of the highest character.  It then became a retail section, second to none.”

At the time of the Civil War the blocks branching east and west off Fifth Avenue carried that street’s high-tone nature.  On the south side of Madison Square, elegant brick or brownstone-faced homes housed affluent families.  But by 1890 commerce had arrived and the 23rd Street residences were being altered for businesses or replaced entirely.

In 1891 J. T. Smith eyed the four vintage residences at Nos. 10 through 16 East 23rd Street as the site of a new expansive emporium or loft building.   He leased Nos. 10 and 12 from Laura A. Fellows, and obtained a second lease on No. 16 from the estate of William Post.   That left only No. 14 to complete the row.

It seems that Smith’s applecart was soon overturned.  In March 1891 John H. Mahony gave a 20-year lease on the house to Nathan Schwab and Leo Schlesinger at $6,000 a year (about $158,000 today).   But, undaunted, Smith commissioned the architectural firm of Napoleon Le Brun & Sons to design matching neo-Renaissance style buildings on either side of No. 14.

Completed in 1892, Nos. 10-12 and No. 16 were the only cast iron structures produced by the architects, who most often worked in brick and terra cotta to produce their often lavish buildings.  And one can imagine Le Brun’s frustration with the old Italianate style house that sat stubbornly in the middle of his up-to-date design.

Schwab & Schlesinger were less ambitious than Smith.  They hired architect R. Berger to convert No. 14 to a commercial structure.  His plans, filed in July 1891, called for an extension to the rear, reconfiguration of the interior walls, and a “new front.”  The cost of the alterations was $8,000.

Berger removed the old stoop and installed a storefront at the first and second floors; ignoring the upper two stories.  The front that he placed over the old façade did not attempt to impress; its function outweighed its design.  The completed renovation did not pretend to be anything other than a converted house—one that glaringly interrupted Napoleon Le Brun’s handsome design.

Not long after its conversion, the building was purchased by F. R. Jones “et al,” who made significant additional improvements.  In December 1892 architect G. H. Budlong filed plans to install a new staircase, fireproof the elevator walls, and re-do the interior walls.  Most noteworthy was the removal of Berger’s storefront and replacement with a “new iron front.”   The owners spent a significant $25,000.

The principal tenant in the newly-renovated building was Meeker & Carter—purveyors of terra cotta and brick.  On September 17, 1892 the Real Estate Record and Builders’ Guide noted “In their new office, No. 14 East 23d street, Meeker & Carter have an elegant display, and intending purchasers are recommended to visit them.  If you at any time require samples or estimates on ornamental front bricks, fire-proofing, hollow bricks, fire bricks, drain pipe, flue lining or glazed bricks, this firm will be pleased o give you prompt attention.”

By 1895 the Berlin Photographic Co. was in the building.  A branch of the London firm, it offered photographs and photo-engravings; most of which were reproductions of art works in public galleries or museums.   Styling itself as a gallery rather than a shop, Berlin Photographic Co. routinely staged exhibitions and one-man shows.

In 1898 art critic Clarence Cook said that Berlin Photographic Company’s offerings “are not copies in the ordinary sense—attempts by some artist-artisan however skillful trained to repeat the work of an original artist—but reproductions,--reflections we may rather call them, mirror-like in their faithfulness of the work they deal with, and capable of giving the same degree of pleasure, differing only in the kind, that we owe to their originals.”

In May 1896 the American Enameled Brick & Tile Co. moved into the building.  The Real Estate Record and Builders’ Guide explained the move as “in order to be within easy access of their numerous and constantly increasing customers, who embrace many leading architects and builders.”  In fact, a symbiotic relationship with Meeker & Carter was most likely already underway.

Within a year, in January 1897, J. Francis Booraem, of the American Enameled Brick and Tile Co., became a partner of James W. Carter, Frederick W. Meeker and Paul E. O’Brien; resulting in the firm Meeker, Carter, Booraem & Co.  The Guide advised “Their architectural terra cotta department, roofing tiles and flue linings are second to none.”  It added, “The firm continues at the old stand, No. 14 East 23d street.”

Booraem continued as secretary and treasurer of the American Enameled Brick & Tile Co.  That year was a good one for the firm.   It supplied the glazed brick for the swimming pool of the New York Athletic Club; for the swimming pool and gymnasium of the new Columbia College; in the Ohio State University at Columbus, Ohio; and in F. W. Vanderbilt’s private stables.  It received a contract for 300,000 semi-glazed white front bricks for the proposed R. G. Dunn building that year as well.

Both companies would remain in the building until the spring of 1899 when they moved to the Metropolitan Building at No. 1 Madison Avenue.

As the two firms were packing up their brick and terra cotta samples, the Berlin Photographic Co. was preparing a new exhibition.   On February 11, 1899 The New York Times announced “There are now on exhibition at the rooms of the Berlin Photographic Company, 14 East Twenty-third Street, a number of prints of the series of pictures depicting the campaign of Napoleon I, in Russia recently completed by Verestchagin, the Russian painter.  The prints, which are well executed, give a good idea of the dramatic strength of the originals.”

The newspaper reported on the exhibition of photographic reproductions as if critiquing original art.  “Verestchagin is the most faithful and remarkable portrayer of the horrors of war now living.  He invests his canvases with a force and reality which are at times almost terrifying.  Now and then he draws carelessly, and his color is not always agreeable; but these defects are forgotten in the power of his work.”

With the arrival of the new century, No. 14 East 23rd Street drew political groups as much as retailers.   In 1900 the headquarters of the Irish-American Union were here; and a year later James A. Blanchard, a fusion candidate for Justice of the Supreme Court established his campaign headquarters in the building.

In 1902 Republican Alfred Steckler’s campaign headquarters were here—in the same rooms that Blanchard had leased a year earlier.  And like Blanchard, he was running for Supreme Court Justice.

In 1903 Mayor Seth Low opened his campaign headquarters in the building.  The New York Times said on October 10, 1903 “Four large rooms are taken up for the needs of the office corps and assemblies.”  The newspaper added “Instead of being styled as the Mayor’s headquarters the place will be described as the ‘Anti-Tammany Fusion Headquarters.”  The campaign later revealed that it had paid Leo Schlesinger $162 for the rent of the rooms.

There was another Low in the building.  Lyman H. Low operated a rare coin dealership on the second floor.  On Monday May 14, 1906 he garnered attention by selling some of the coins collected by General L. P. Di Cesnola, the long-time Director of the Metropolitan Museum of Art.

To attract customers to his second floor shop, Low placed a showcase on the sidewalk with lead reproductions of certain coins.   One crook had the mistaken idea that Low was foolish enough to exhibit actual coins in the unguarded case.  Between 10:00 and 11:00 on the morning of June 10, 1908, he pried open the display and made off with 150 reproductions.  While The New York Times said they would be “practically valueless to the thief,” it added “Had they been the genuine coins their value would have been close to $25,000.”

By now there were more offices than shops in the building.  Architect Howard Constable’s office was here by 1906; four years later architect Arthur W. Eiser was here; and in the 1920s Harold L. Smith, another architect, leased space.

The stamp enthusiast group, the Collectors Club Philatelist took space by 1909; as did real estate operator I. J. Auerbach.  It was Alfred Auerbach who, in 1910, arranged the lease of the entire building to Costis Takis.  The 21-year agreement involved a total rental of $200,000—about $240,000 a year in today’s dollars.   The announcement said “The lessee will make extensive alterations to the premises and occupy the same as a retail confectionery establishment.”

Takis opened The Goody Shop which specialized in “choice chocolates and bon bons.”   It would grow to a chain of stores until Takis filed for bankruptcy in 1927.

The buildings facing Madison Square suffered street level modernization throughout the 20th century.  When Mo-Art Properties, Inc. purchased No. 14 in 1962 it was assessed at $77,000.   The address gained a sort of celebrity when Mike Morgenstern opened Jazzmania Society in December 1974 in the fourth floor loft.

On March 10, 1980 New York Magazine opined “Jazzmania Society, Mike Morgenstern’s homey four-story walk-up at 14 East 23rd Street, is still the most intimate of jazz rooms (currently seating 125), partly because people sit on couches, on the floor, and in a dark loft within the loft.   The whole room is carpeting for sound absorption, a fireplace roars in the winter, and one of the two arched skylights boasts a huge poster of the pool at Palisades Park.”  The club would remain here for decades, into the first years of the 21st century. 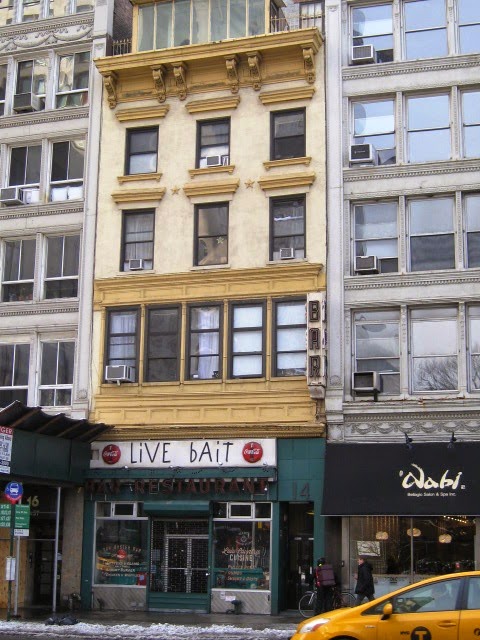 In 1983 the upper three floors were converted to apartments.  Today the ground floor where Edwardian ladies shopped for “choice chocolates” is a bar and restaurant.    And seen from Madison Square across the street, the converted rowhouse still bullies its way between Napoleon Le Brun’s handsome cast iron structures.